If You Buy Postal 4 Then You’ll Regert It 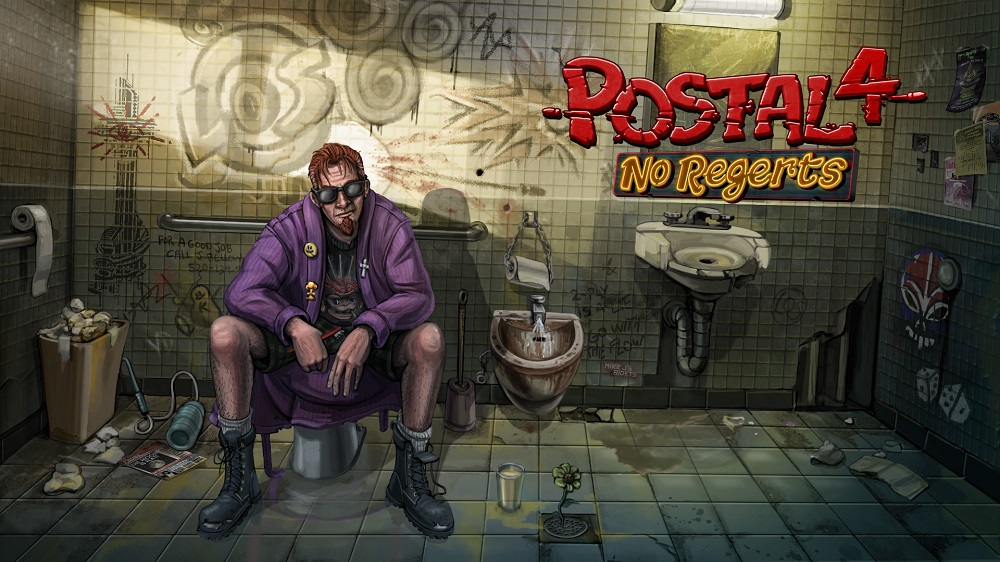 The very first Postal was a dark, disturbing portrait of a man descending into madness and going on a homicidal killing spree. Postal 2 skewed in the other direction, being much more of a goofy, satirical open-world game, with the violence being largely optional. Postal 3 was widely considered a misfire, riddled with bugs and hobbled by repetitive gameplay, it made the series feel like it was running headfirst into self-destruction like its protagonist. Now Postal 4: No Regerts has a chance to right the ship, but does it simply delve deeper into self-destructive madness instead?

Postal 4: No Regerts starts off with the series protagonist, the “Postal Dude”, finding himself with his trailer and most of his possessions stolen. Now he is stranded in a town somewhere in Southwest America with no more than a bathrobe and his trusty dog. He sets out to make some money doing various dirty jobs no-one else would want to do in an attempt to re-establish himself and climb out of homelessness and poverty.

Postal 4: No Regerts is an “open world” game in that you can walk around nondescript towns (with the occasional wacky building like a giant toilet built into a villa) for a brief period before the game abruptly pauses and takes a torturously long time to load in the next area. Though Postal dude is able to purchase a mobility scooter to help him more quickly traverse the terrain, the frequent loading checkpoints in every area made me absolutely loathe to look around and explore. 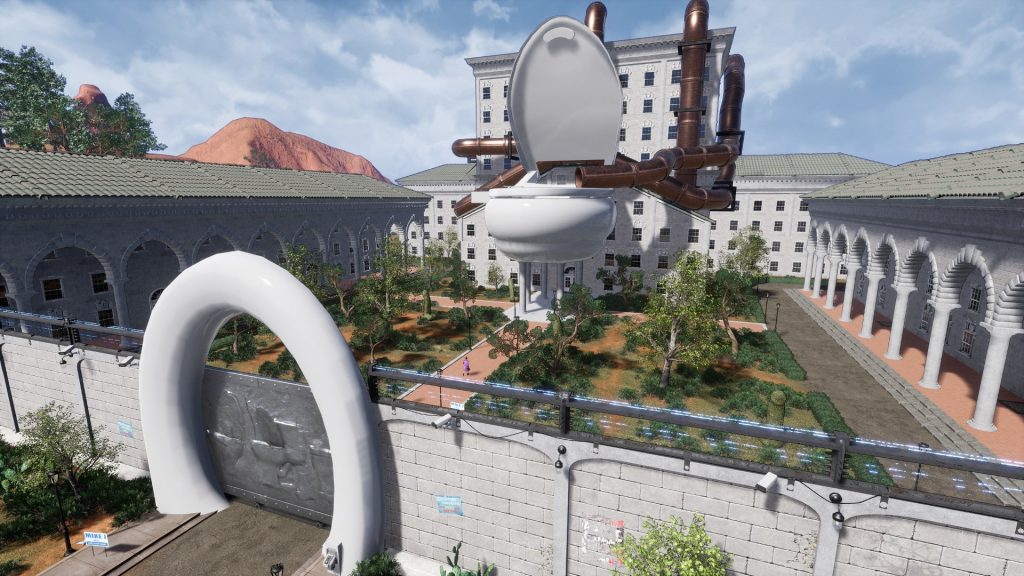 Some series grow and mature. Postal is not one of them. Right from the start, you’re going around collecting talking dolls shaped like the male and female reproductive organs, who make dire sexual puns when you pick them up. Ugly, dead-eyed NPCs talk on their mobile phones about future sexual activities, asking “only up to one knuckle?”, whilst homeless people exclaim “where’s my poop bucket?” Don’t worry though, if you miss the hilarity of these lines the first time, you’ll be hearing them over and over till your ears bleed.

Toilet humor is a big focus of Postal 4: No Regerts, and I found this out from the first time I switched on the radio from Postal Dude’s mobile phone and heard a hair metal song where the lyrics gave an evocative description of the singer’s explosive diarrhea. Speaking of the mobile phone, it also serves as a map to help the player navigate their surroundings and find new jobs and opportunities.

Curiously though, the map randomly stopped being able to pan around at one point. At the same time, the radio stopped working as well. Since the game looks like an early PS3 title whilst still chomping up my memory and CPU like a hungry hungry hippo, bugs like this seemed about par for the course. Occasionally Postal Dude will even get stuck on the floor for no apparent reason, walking around very slowly like his shoes are covered in glue, making the proceedings even more dull than they already were. 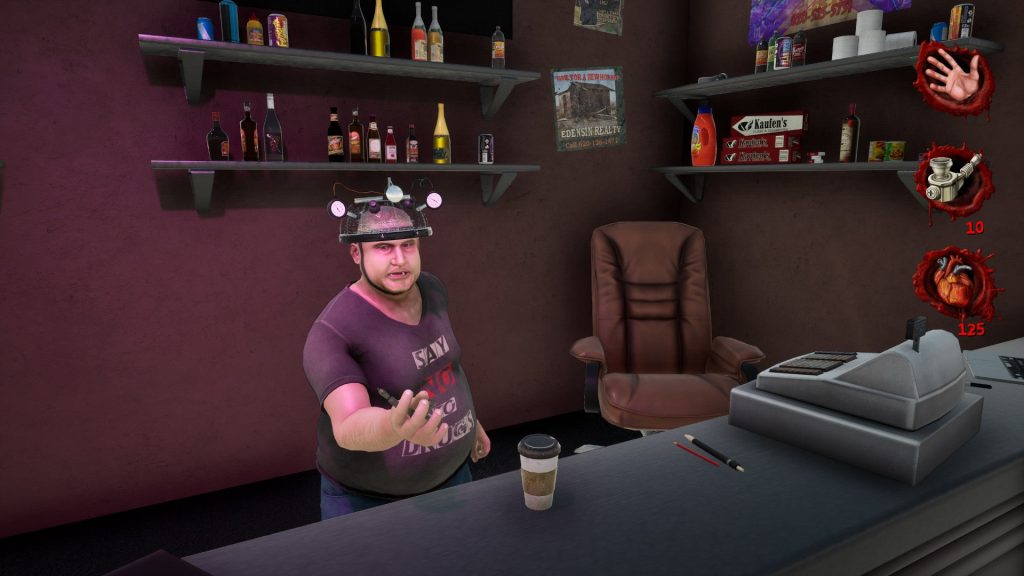 Appropriately for a game so focused on toilet humor, early on there’s a sewer level, which tends to be the worst part of any game, but for Postal 4: No Regerts it also typifies everything wrong with the broader game itself. There are tunnels where you have to search for broken lightbulbs to fix, giving you several joy-filled minutes of backtracking carefully between steam pipes if you miss even one flickering bulb. This mirrors many other tedious scavenger hunting sections in the game like when you’re rounding up stray dogs and cats. If you want a simulation of doing spirit-crushing menial labor, then Postal 4: No Regerts has you covered!

A platforming section has you jumping onto floating debris in a filthy sewer, but everything looks so dark and glossy it’s hard to distinguish platforms from the sludge. It’s not often the challenging part of a game is trying to distinguish one item from the next. I even tried pouring some gasoline on the ground and lighting it with a match as an innovative way to get some light (it’s normally used as a sadistic way to kill people) Periodically, Postal Dude’s employer would chime in through the intercom: “Are you having fun down there?”

Speaking of menial labor, there’s a section where you have to use a shovel to unblock pipes filled with backed up feces (after doing some awkwardly imprecise first-person platforming). I held down the right mouse button for thirty seconds as the pile of poo gradually diminished under the Postal Dude’s slow shoveling. “That’s a lot of shit” remarks the Postal Dude, mirroring my own feelings exactly as I struggled against the temptation to slam my thumb and middle finger onto the alt and F4 buttons. 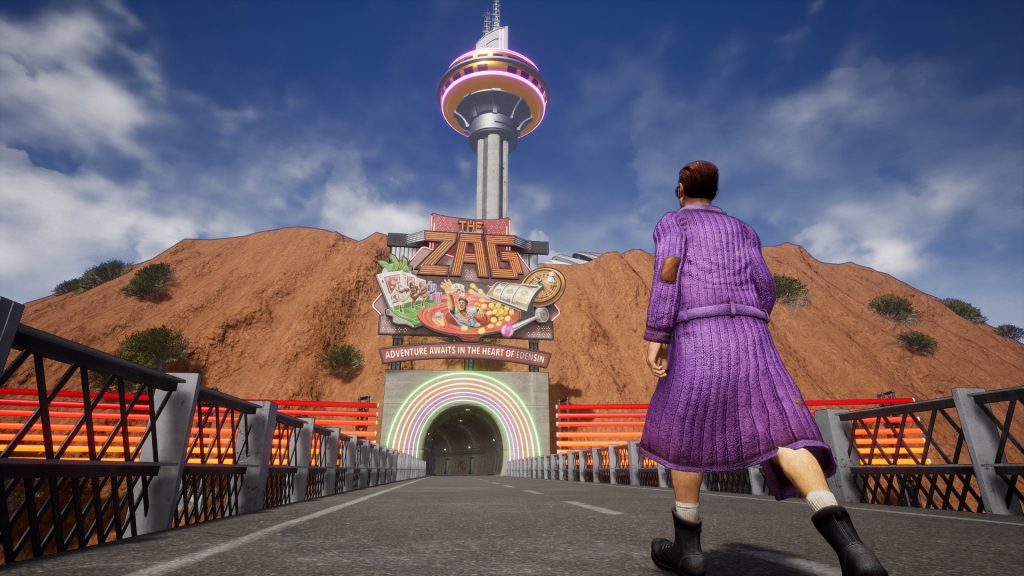 Since Postal is the name of the game, what about the parts where you actually go on a killing spree, eh? As you’d expect, gunplay is as basic as it gets. You walk forward and shoot people (and sometimes animals). The focus is not on innovative or fun combat mechanics, but rather on the sadistic spectacle of killing. Postal Dude can light people on fire, blast their heads into gory chunks with the shotgun and then even whip out his manhood and urinate on them if the player chooses. Most horrifyingly, Postal Dude can insert a grenade into a cat, watch it scamper up to adversaries (or random bystanders) and watch them both blow up. It’s the sort of thing that was shocking in the days of Postal 2, but now the offer of pure sadism in lieu of challenging, fun battles just seems a bit sad.

Other than a Postal penis, there are a wide variety of weapons to choose from (including absurd ones like the pigeon bomb) but you’ll seldom need more than one gun. The idiotic AI can’t do anything more sophisticated than have adversaries simply run at you and attack you. Closing a door in their face will easily confuse them and possibly cause them to glitch partially through it, letting you shoot them with impunity.

The developers even make a joke about the underdeveloped gunplay, noting about the shotgun that using iron sights doesn’t improve the accuracy, but you can do it anyway if you feel like it! 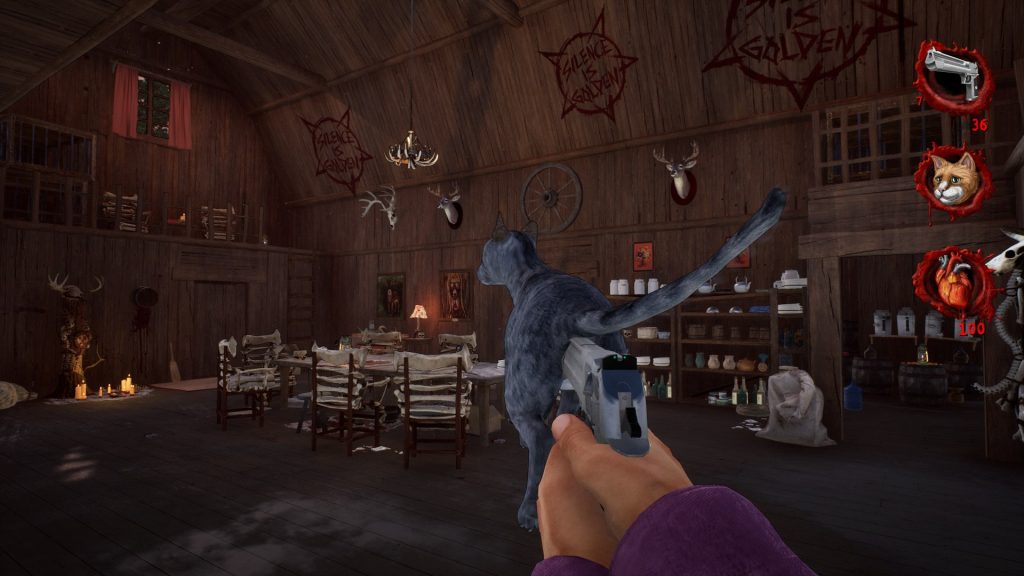 The parts of Postal 4: No Regerts that might be considered fun are like finding an oasis in the desert. Occasionally, there’s the odd joke that does land, usually during the comic-book style cutscenes that occur between the days in Postal Dude’s week. I enjoyed the Postal Dude asking the creepy proprietor of a filthy roach-infested motel “is there a continental breakfast?” only to be answered: “anything edible you find is free”.

Sometimes you’ll get a choice about how to proceed during a mission. One mission had Postal Dude receiving a small fine and having to go down the police station to pay it off. The fine is given in the form of community service – namely going around town giving illegally parked cars tickets. Just as I was starting to have a panic attack at the idea of having to do something so boring it was revealed I could simply turn my fine in as paid early. However, when prematurely placing the fine slip in the dropbox, the entire police station went into lockdown, forcing me to shoot my way out. It was quite funny the sudden violence after such a minor infraction and it was a godsend to be able to essentially skip more busywork. Still, when one of the best parts of Postal 4 is the ability to skip parts of it, that’s really not a great sign.

If Postal 4: No Regerts was released 15 years ago it would just be buggy, ugly and dumb. Since it’s released today, it’s also very dated in its lame scatological humor. With an endless focus on making you do tedious errands, it can take a while before you get to the actual homicidal mania, and when you do, it’s a janky, repetitive letdown. Unless you’re the world’s biggest fan of poop and penis jokes, Postal 4: No Regerts is as much fun as watching someone laugh at their own farts.

Full disclosure: This review is based on a review copy of Postal 4: No Regerts provided by the publisher.