Salt and Sacrifice Review: Pleasure That’s Worth the Pain 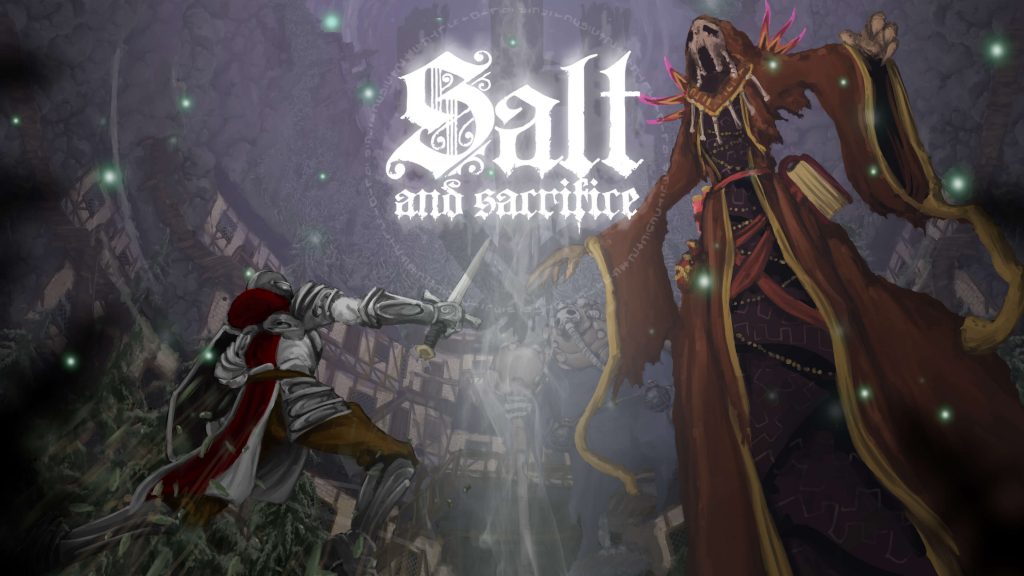 It was just a little over a month ago that I previewed the long-awaited sequel to Salt and Sanctuary, Salt and Sacrifice. My time with the sequel’s demo was short, covering about half of the first area, a handful of boss battles, and the hub world. But, at that time, that was all that I felt that I needed to declare that Salt and Sacrifice was, and I quote, “poised to blow it blow its predecessor away.” Now, I’m aware that that’s a pretty powerful statement to make, especially given how little of the game I had actually played. But I was so confident that the rest of the game was going to live up to what I had played so far that I was prepared to eat my words If I was wrong. And, wouldn’t you know it, no such words are going to be been today, because the game is great—really great. 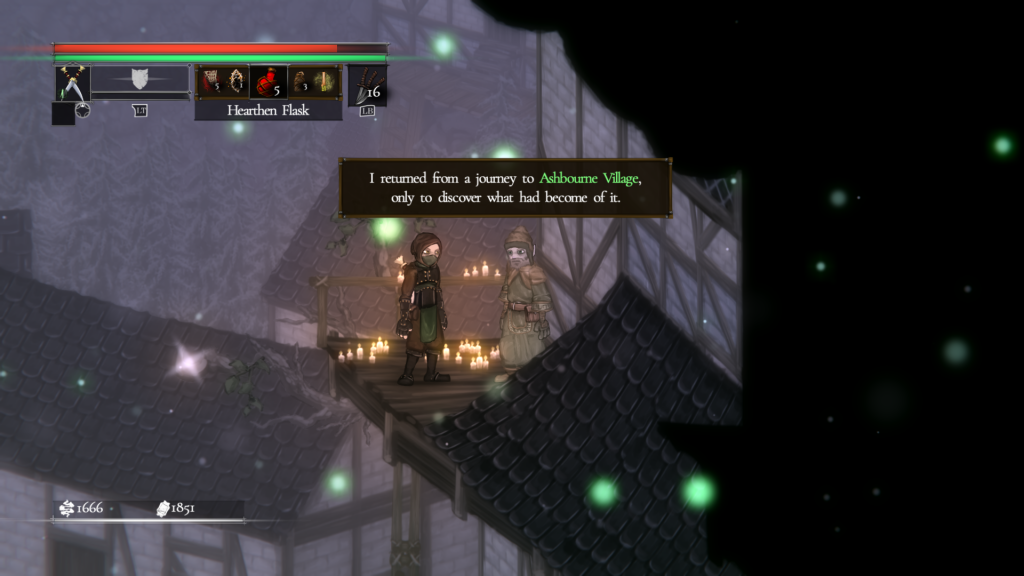 Yeah… Sorry I didn’t commit my crime and get sent here earlier, man.

Following the tradition established by its predecessor, Salt and Sacrifice doesn’t exactly have the happiest of narratives. The story begins with you being branded a criminal. The good news? You get to pick what crime you committed. The bad news? Whatever crime you pick was really bad. So bad, in fact, that you have two choices: die, or become a Marked Inquisitor. Obviously, you pick the latter—how bad can it be? Well, pretty bad, actually! Marked Inquisitors specialize in hunting down “Mages,” which are people (in the loosest sense of the term) who have gathered so much magical energy that they have essentially become living embodiments of magical chaos. What’s that? You’d rather just be executed on the spot? Oh, no, my friend, it’s too late for that. You’re joining the hunt—off you go!

The bulk of Salt and Sacrifice‘s story is both player-oriented and exploratory in nature. Save a handful of cutscenes, most of the story is able to be explored at the player’s own pace (much of it coming from simple conversations with others within the hub area), and much of it can even be entirely skipped. I wouldn’t recommend skipping or rushing through anything, though. While storytelling isn’t at the forefront of what makes Salt and Sacrifice so great, it certainly enhances the overall atmosphere of the game. Getting to know the few actual living souls around you and why they’re here makes things feel that much more macabre and dire (and, at times, even hopeless)—and I totally eat stuff like that up.

A Picture’s Worth a Thousand Levels 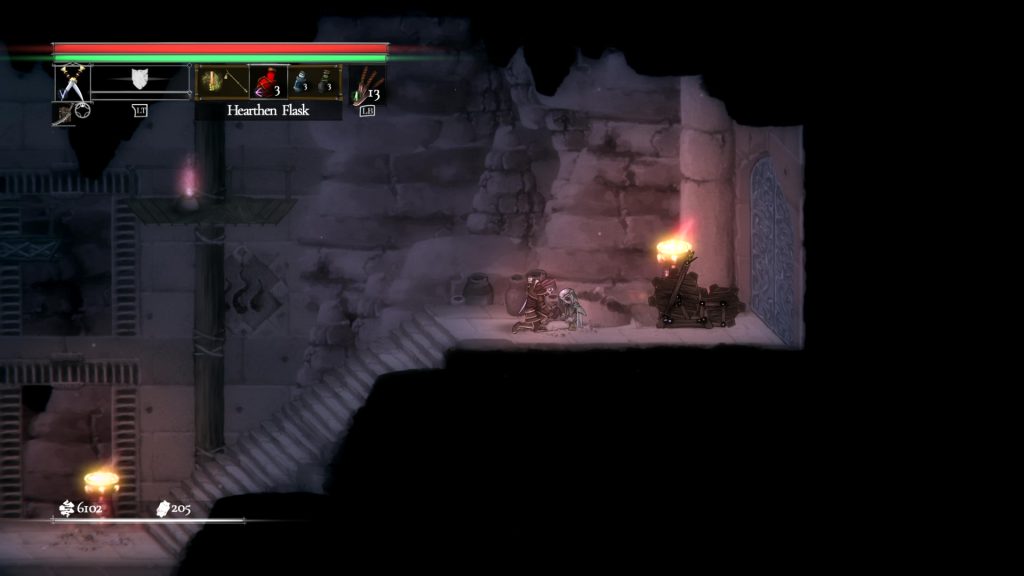 You don’t, like, need this tool any more… do you?

In some ways, Salt and Sacrifice hasn’t changed much from Salt and Sanctuary. I’d say that this holds truest in situations like combat, where, as far as I can tell, things haven’t really changed at all. Other parts of the game have changed, however. And, among these differences, none stand out more so than level design. I’ve already said it once in my preview, but I’ll say it again because I really can’t think of a better way to describe Ska Studios’ new approach to setting this game up—if Salt and Sanctuary was Castlevania: Symphony of the Night, then Salt and Sacrifice is Castlevania: Portrait of Ruin. Now, I’ll ask you to keep your opinions on those titles to yourself because we’re not here for that—the reason I’m making these comparisons is so that we can look at level design. Salt and Sanctuary, much like SotN, is one big, interconnected area (aside from the second castle, anyway). Sure, there are thematically different areas, but it’s all on a single map. Salt and Sacrifice and PoR, however, are actually divided into smaller, instanced versions of the traditional Metroidvania layout. There’s no way to simply walk from one area to the next—a hub world is needed to act as an intermediary between levels.

So, what exactly does this all mean in terms of how Salt and Sacrifice plays out? Well, a few things, actually. In the beginning, each new area actually plays out less as a Metroidvania and more as a platformer with Metroidvania elements. A lot of the stuff in the new area is (generally) inaccessible when you get there, and, in order to gain access to those areas, you’ll need to find the appropriate Inquisitor’s Tool (think Relics in Castlevania). Those aren’t just laying around waiting for you to pick them up, though. …Er, wait, actually they are. But a boss is always guarding them! So, you know, you’ve gotta beat them down before you can lay claim on whatever goodie is patiently awaiting your arrival. 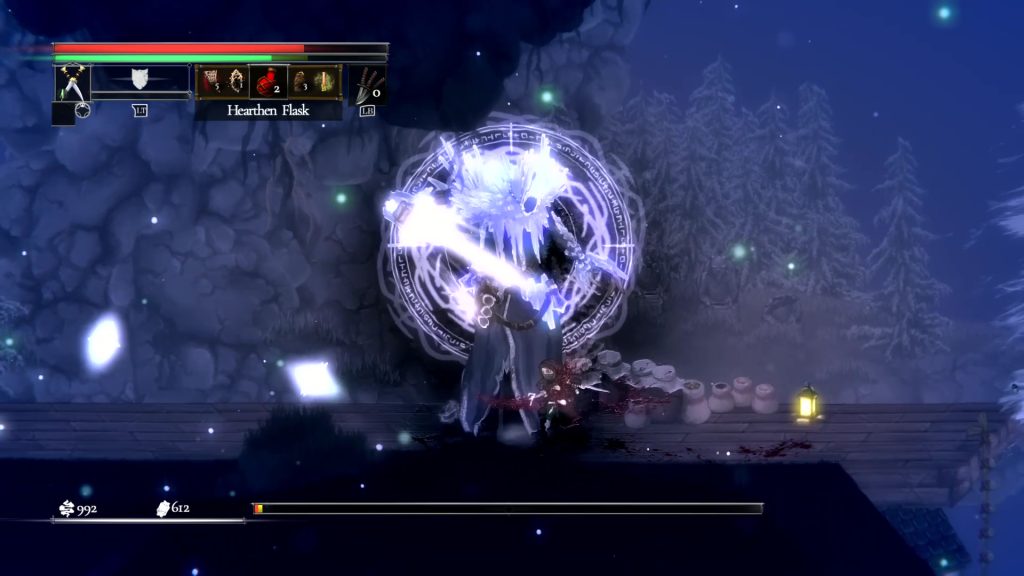 I’d tell ya to cool your jets, but, well… you know.

Beating an area’s boss and nabbing its Inquisitor’s Tool is an important thing. But, in my opinion, it’s only a prelude to the real star of the show—the Mage hunts. The Inquisitor’s Tool isn’t your only reward for beating the boss. No, your other reward is a newfound ability to now freely explore the world around you (although there are exceptions here and there). Every world is going to differ in setup, and your luck finding various enemies, crafting components, and treasures will vary. But one thing you can always count on finding somewhere around the level is a corpse. Several of them, actually. And each of these corpses, once interacted with, will unlock the ability to hunt down a specific Mage.

Mage hunts are a combination of exploration and combat and are, without a doubt, the highlight of the game, in my opinion. Once you’ve accepted the hunt, the Mage will spawn somewhere within the level. The player will then be able to track them down by following a magical trail. Upon reaching the Mage, the obvious will happen—the two of you will duke it out. Not surprisingly, Mages are really strong. While no two Mages are exactly alike, all of them generally like to simultaneously summon special enemies and sling spells at you—it’s rough, so be prepared. Mages don’t typically go down right away, though—no, they’ll teleport somewhere else after taking a set amount of damage. So you chase them to their new location, battle them, rinse, repeat, and so on, until they’re finally dead, and you can reap the rewards of your hunt—and by rewards, I mean components for crafting really cool gear. 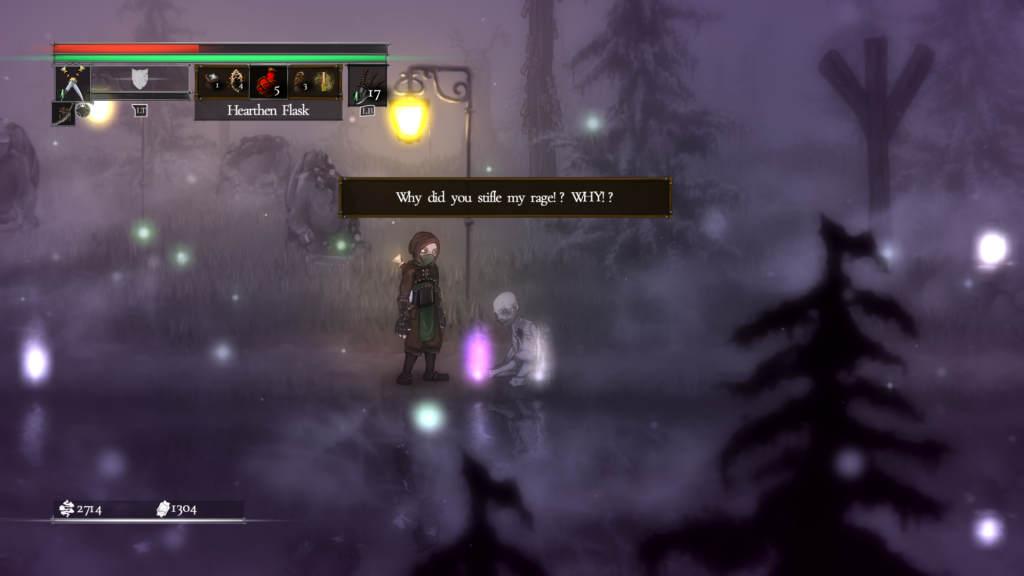 Initially, I thought that you could just re-invoke the Mage hunts whenever you wanted to. It turns out you can’t. And, when I realized that, I was kind of worried. I was really banking on being able to endlessly hunt down these guys, you know? Fortunately, it appears as though my fears were all for naught—while you can’t summon Mages willy-nilly, they do respawn in their respective levels on their own after some time. All you need to do is walk around for a while, and you’re guaranteed to run into them, eventually. And, now that I know that endlessly hunting Mages is, in fact, a thing, I can honestly say that I’m truly happy with how Salt and Sacrifice has enticed it’s into replaying older levels. Really, it’s a great (and beneficial) idea.

Standing on the Backs of Giants

Salt and Sacrifice isn’t just a great game, but a great sequel. It’s the result of building upon the things that worked so well in the first game, tweaking the things that might not have worked so well, and cleverly taking the occasional mechanical risk here and there in order to ensure that Salt and Sacrifice truly felt like its own game instead of just “Salt and Sanctuary 2.” It’s fun, frantic, and frustrating in all the right ways, and I’m incredibly happy with what Ska Studios has given us. Salt and Sanctuary was able to build such a large community around it and stick around for such a long time because of how high-quality it was at the time of its release. I’m sure that Salt and Sacrifice will manage to surpass those heights.

Full disclosure: This review is based on a copy of Salt and Sacrifice given to Hey Poor Player by the publisher.