As you enter chapter 5, you’ve made a choice that will define your character. Now Hiroki is determined to escape this wretched land. Head forward and grab a collectible right off the bat. The path ahead of you twists and unwinds, creating a path going just where you need to be. You’ll soon find a shrine and a series of symbols on rocks. Climb down to them to find a puzzle. You’ll need to rotate three layers of symbols, putting the three that are in the environment in order at the top of the spinning wheels. Get these in order to unlock the way forward. Get used to these puzzles. They’ll be appearing a lot the rest of the way.

Enter your new path to find a ghostly enemy waiting for you. Slay him and move forward to find some shurikens. Move forward and slide down a slope, then hop off a ledge. A stamina increase is waiting for you there. Grab it, then go inside. Use the shrine here and then emerge into a courtyard. You’ll find some arrows ahead and a ledge to hop off. Hop off another ledge to meet another spirit who doesn’t exactly believe in your journey. Kill him, again, apparently. He gets some backup, but after you beat them, you’ll slide down a cliff ahead. Hop off another ledge and find a bunch of spirits waiting to fight. Take them out. Move to the edge, and this time, when you hop down, the ground will shake and transform, taking you to a shrine.

A specter stands in your way who is fast but not too tough. Beating him unlocks a new skill. Head into the building behind him and go into the alcove at the back of the room to get an ozutsu upgrade. Move forward and fight a few more spirits, sliding down a path. Some ammo outside is waiting for you, then you can climb up a few cliffs. Move forward through some wild scenery, taking out more spirits. Climb up a cliff to find ammo and a shrine. Then enter what seems to be a village. A wraith awaits you there. Beat her and grab a new skill.

Move inside to grab some ammo. You can head forward or up. Go forward for a shrine and an ozutsu upgrade, then return and go up. Outside you’ll have another rotation puzzle, but it’s the same as before, find the three symbols in the environment and put them in order at the top of the circles. This will again clear the path forward. Take out a few more enemies, and when the path turns, grab a collectible off to the side. Grab some ammo ahead and then drop off a cliff. The ground ahead of you will transform again. Tons of enemies stand in your way. Take them out and keep moving. Eventually, you’ll find a flying enemy sending hordes of foes at you who you can only hit so much before they fly up again, and you must take out more minions. Keep up your assault, and they’ll eventually go down. Head through an enormous door into what is known as the depths. You’ll find a shrine there.

The path ahead will start to transform as well, but this time this transformation turns against you. You’ll have to retreat to avoid being crushed as the walls transform and close off. A new path, however, will open. A shade down this path will jump around, vanishing and appearing, but take him out for a quiver upgrade. More shades wait ahead, and then you’ll find yourself in a long hallway. Climb some stairs and interact with a pillar to start the world transforming again, with you again having to retreat to avoid being crushed. Go left at this point for a shrine and then right to continue. A bunch more spirits are ahead, and then another shrine and arrows. Head to the right, and you’ll face more spirits. Take them out you’ll see a path open. Go to the right to grab ammo and a collectible, then go into the newly open path.

Here you’ll find a split path that forms before you. On the left is a stamina upgrade, but the right is the path forward. Lots more spirits wait ahead, and then you’ll reach a shrine. You’ll see an altar ahead. Go to the right, and you can grab a collectible, then head left. Cross one more path, and you’ll find the spirit of Sadatame, who wants a rematch. It’s much the same as the last fight against him, though you will get a skill at the end of the fight. Cross some vines after this to reach a new cliff. The vines behind you will collapse, but you’ll be across, and you can climb up a ledge. Move forward for a shrine and some ammo. Then move into an open area where you’ll be surrounded by spirits. There’s a shrine after you take them out. Just north of you, you’ll find a health increase. Grab it and continue forward.

There’s another stretch ahead with enemies on horseback, which you can roll past the strikes of. Get past them, and you’ll find a shrine. Another set of flying enemies are ahead, sending henchmen after you. Defeat them, and you can climb off a cliff, sliding down. You’ll find a new puzzle here which may not seem like one at first. A button will start flooding the area with water, and a boat you can climb into allows you to float up to a platform. Before doing so, though, you need to cut the rope holding the boat in place, otherwise, it won’t reach the surface, and you’ll drown. There’s ammo in the boat and a shrine at the top of the cliff.

Fight your way up a huge hill filled with foes. At the top, you’ll climb over a barrier. Follow the path to grab some ammo and then reach a shrine. There’s a hard-to-see little path just to the right of the shrine where you can enter and grab a health upgrade. Then follow the path forward. Go up the stairs, and you’ll find another of the symbol puzzles. Same thing as before, rotate the circles to get the symbols in the environment in order. After doing so, you still won’t be able to cross to the newly open path. You need to stand on a small trigger. Careful though. It only activates the place you can cross for a few seconds. Get across and keep moving. Climb down some stairs here to reach another shrine.

Move forward and fight some spirits, then head up a set of stairs. Grab some ammo and then head up yet another set of stairs. There’s a collectible here and then one more set of stairs. You can climb down a couple of ladders here for ammo and then climb back up for a shrine. Hop off a cliff and then fight a bunch more spirits. Move forward to grab some ammo and then climb up on a pair of ledges. The path ahead will split. Go left for a stamina upgrade and shrine, then go back right. There’s another long cool path ahead, and lots of spirits to fight, followed by a couple more cliffs to climb. You’ll find an area with all types of ammo and a shrine. Then proceed to fight the final boss of the area, who makes a lot of sense if you’ve been paying attention to your journey. He’s much simpler than the last boss, though he is fast, and you’ll have to time your attacks. Beat him to complete chapter 5. 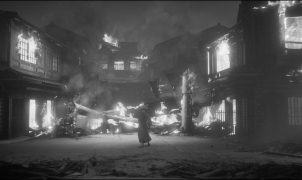 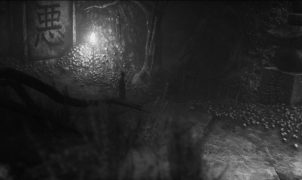