Moo Lander is The Weirdest Platformer I’ve Played This Year, and I’m Kind of Digging it 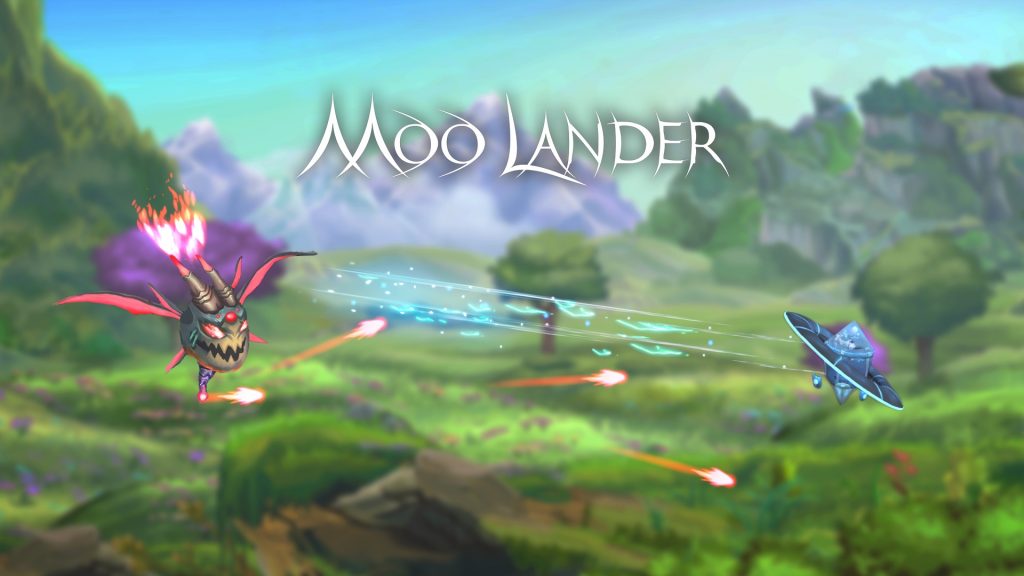 Taking a well-known concept and turning it on its head isn’t anything new within the world of video games (or anywhere, really). We’ve had scenarios play out from the viewpoints of would-be evildoers who we find out aren’t so bad after all, seemingly innocent platformers that slowly turn into Lovecraftian nightmares, and entire adventures where you journey across the land to defeat the big bad, only to find out that you were the bad guy all along *dun dun dun*. We’ve also had games about alien invasions from the point of the aliens—which is exactly what Moo Lander is. But, uh, I can’t say that I’ve ever seen a take quite like this one.

Before playing Moo Lander, I thought that the whole “aliens abducting cows” trope was so old at this point that it had essentially become a joke. I assumed that no one used it anymore because it was literally impossible to make it feel new again. And, it looks like I was wrong! Not only does Moo Lander find a way to make the most iconic alien-related trope feel new again, but it does it as bizarrely as possible—and I’m definitely here for it.

Got Milk? (Because We Really Need It) 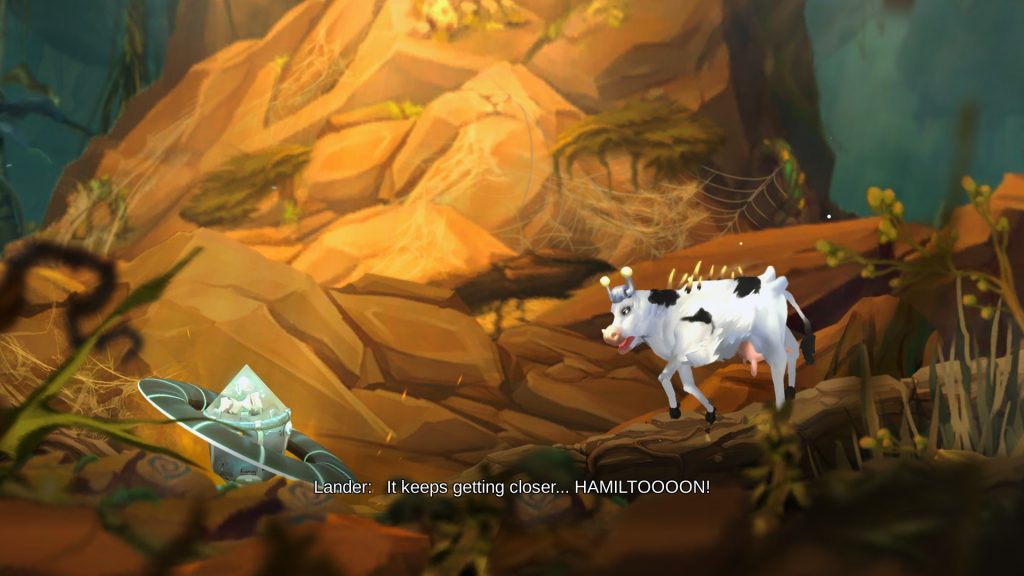 Set on an extremely unfamiliar-looking Earth, Moo Lander tells the story of an alien pilot, simply known as “Lander” (which I believe is just the name of his species), on a noble mission—a mission which requires that he collects as much milk as possible (yes, I’m being serious). You see, milk, for some reason, is an incredibly precious resource and holds within its very cells near-infinite power. It’s also incredibly scarce, meaning that most planets have no way whatsoever of acquiring this bovine-based ambrosia—but Earth sure does! Upon realizing this, Lander, whose own planet is currently in dire straits due to an extreme milk shortage, takes the very last spacecraft available, and makes a beeline straight to Earth—only to immediately crash land and lose almost every single important part attached to said spacecraft.

I’m going to be honest with you—I feel like making humorous storylines is a lot more difficult than people give it credit for. Most of the time it just results in lukewarm dialogue and over-the-top gags that fall short of delivering anything with substance. But there was something so intentionally schlocky about Moo Lander‘s entire premise that I couldn’t help but enjoy it. It’s goofy but takes itself just serious enough to make sense. Humor is very much a balancing act, but, so far, Moo Lander seems to be balancing things pretty well. 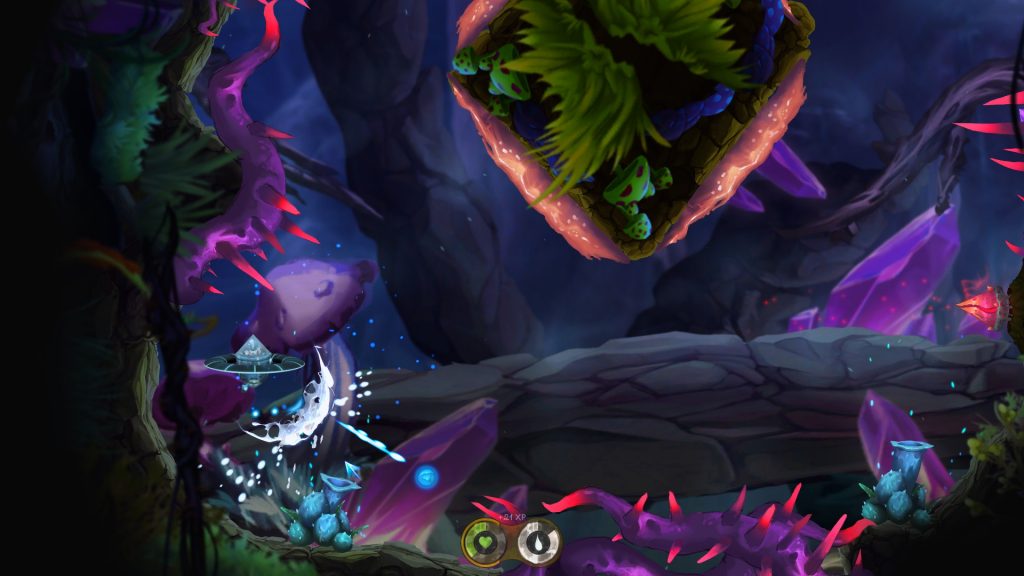 As dangerous as everything is, Earth kinda looks pretty.

Moo Lander‘s zany approach to storytelling isn’t the only thing that makes it so strange—the gameplay itself sets it apart from other 2D platformers, too. Most of this comes from the fact that, while technically a platformer in terms of level layout, the game plays more akin to something along the lines of an arcade shooter. Rather than running along the ground, the entirety of Earth is explored from the comfort of your spaceship. And that’s good, because this version of Earth isn’t a version that I’d want to walk around on, either. From creeping thorny plants and vines that literally try to grab and suck the lifeforce from your ship (which is a thing, apparently?), to bouncy creatures that affix themselves to your craft with their tongues only to detonate themselves moments later, almost everything wants you dead in this world—and you’ve got to get really good, really fast if you want to survive.

Fortunately, piloting your craft isn’t terribly hard. The controls are responsive and, aside from a few parts of the demo where things felt a tiny bit on the cramped side, the level design was catered to your UFO quite nicely. The fact that you were able to pick up power-ups along the way was a nice bonus, too. In the beginning you literally start out with nothing, essentially making your time exploring Earth a game of cat-and-mouse. After a bit of exploring, though, you soon find yourself coming across some of your dropped tech including shields, guns, swords, and even a jet-propulsion system—and, of course, everything that you use is powered by milk. Leveling and skill tree systems also appear to be in the works (which I can’t say I expected from a game like this), as does a system which rewards players for killing certain numbers of enemies. All-in-all, it looks like a pretty good time! 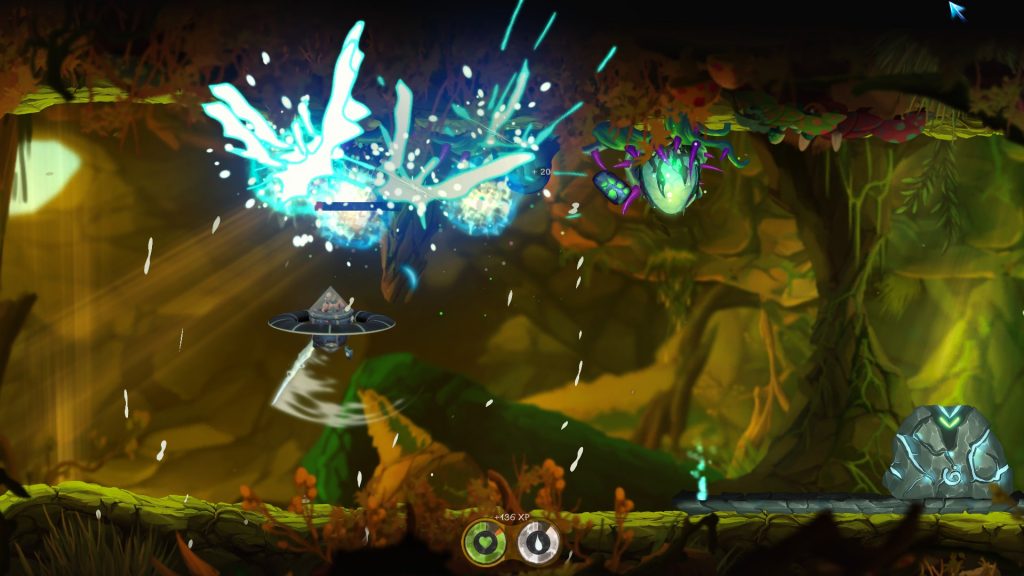 I didn’t think I’d ever be using a “milk sword,” but here we are.

After a long trek, I eventually found my way to the end of the demo area. And what did I find waiting for me? Why, a cow, of course! But this isn’t some current-year, cow. Oh, no, this is a Moo Lander cow. And these suckers are mean. By the looks of it, every time you want to abduct a cow you’re going to have to engage in a series of increasingly difficult boss battles with them. And, because you don’t want to abduct them and not kill them, things like guns and swords are off the table—leaving you with only a single, and quite slow, bomb at your disposal. Admittedly, this boss battle left something to be desired. Hopefully things get better as the game continues, though. Everything else was pretty great, after all!

Truthfully, I wish that I could have spent some more time with Moo Lander, as I felt that the demo was a bit short for my liking. Still, you get what you get and I can’t say that I walked away from this game entirely unsatisfied. While the boss battle did leave me a bit frustrated at the end, every other part of the game was a legitimately enjoyable time—and I’m definitely looking forward to seeing what the full game has in store for us.