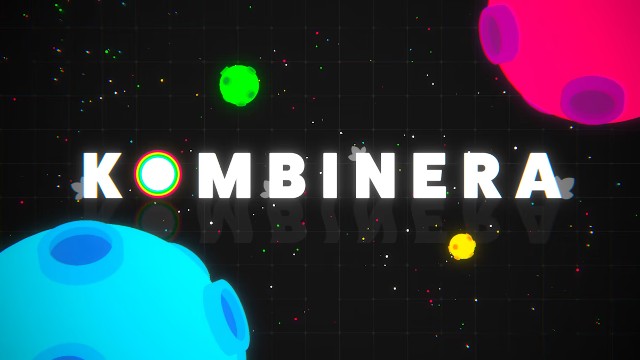 I must love feeling like an idiot. It’s the only explanation for why I enjoy puzzle games as much as I do. “Simple to learn, difficult to master” has long been the mantra of a good puzzler, and Kombinera perfectly exemplifies it. In this puzzle platformer, your goal is to manipulate different colored balls and combine them into one. Its simplicity hides a cunning array of intellectual challenges that will have you yelling, cursing, and coming back for more. 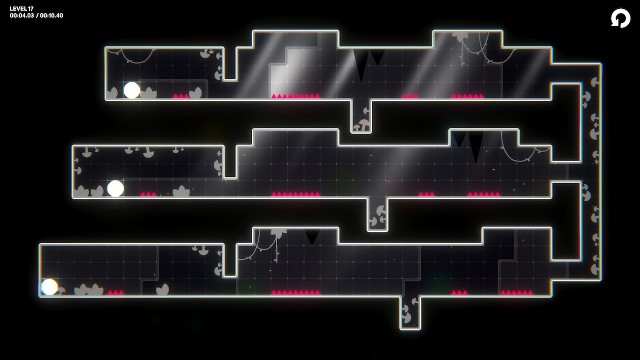 Like I mentioned, the goal in Kombinera is to combine all the balls into one. The kicker here is that they all move at the same time and in the same direction. This means you have to use the environment to help manipulate them into combinable positions. The first level demonstrates this principle. You have two balls. Roll them in the same direction, and they’ll both hit the wall, combining. Done and done!

That’s as simple as it ever gets. The game isn’t shy about introducing all kinds of obstacles. Spikes, cannons, smashing columns, breakable blocks, buttons and moving walls…the environment is as much a friend as it is an enemy, so you better get used to that love/hate relationship real fast.

Even the balls have different properties. White is regular, pink can traverse spikes, yellow breaks blocks, green absorbs cannon fire, etc. Black is especially tricky—it can’t jump, so it only ever rolls around while all the other balls are getting fancy and jumping all over the place. I like to think it’s lazy, but maybe it’s just tired. 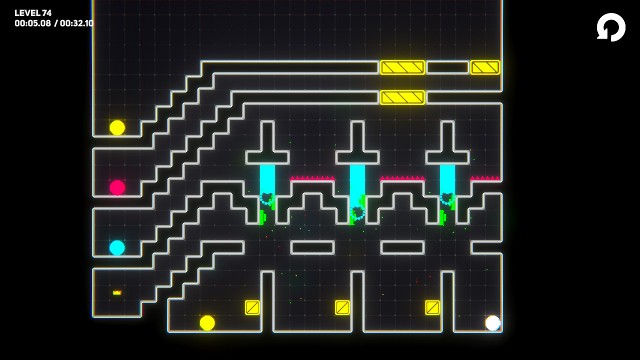 Gravity also plays a key role in Kombinera. The game has its own physics, and it takes a while to get used to the speed at which balls travel, jump, and fall. In addition to that, some balls have inverted gravity. That’s right: in some levels, you’ll have balls on the floor and the ceiling. This design alone forces you to come up with creative ways to combine them all. Sometimes, the answer is to put them on opposite sides of a platform and have them fall into each other. If only it could always be that easy.

While Kombinera is built on principles that are easy to understand, the execution is, quite frankly, diabolical. The difficulty ramps up quickly, and it never lets up. The one exception is when you start a new chapter, which introduces a new mechanic. The first few levels of each chapter are thankfully kind to the player. After about five levels or so, though, you’re thrown right back into the lurch.

The Pain Is Real 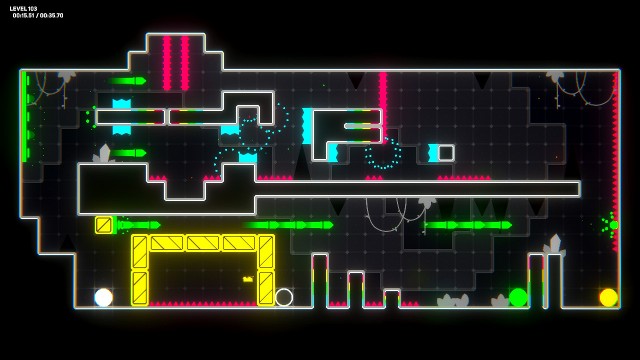 Most of the difficulty is from the platforming element of Kombinera. I often understood what I needed to do to beat a level; it was just a matter of making it happen. Anything that can kill you does so in a single hit, forcing you to restart the entire level. Level 103 (as shown in the screenshot above) is an example from my play time. I died eighty-four times alone on that level, and I knew exactly what I had to do the entire time.

It’s just that most levels are designed in such a way that there is no margin for error. None. Literally none. When you’re jumping around spikes, dodging crushing pillars and cannon fire, and maneuvering your way around breakable blocks, which are typically above spikes, there’s no room for mistakes. Kombinera frequently requires pixel-perfect jumping, and anything that isn’t perfect results in a restart. 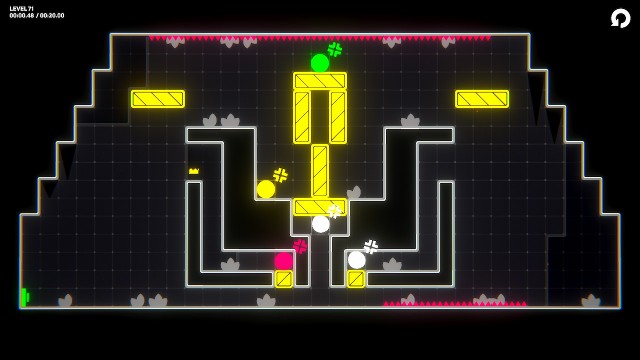 You won’t be surprised to learn, then, that I’ve died 775 times while playing Kombinera. I haven’t even managed to make it to the final level, level three hundred, yet. I’m not sure I’m capable of doing it. Its deadly designs are never unfair, but that’s not much solace when you keep dying every few seconds. If you die enough, even the balls get angry. I’m right there with you, Balls.

For those of you who excel at Kombinera, you’ll be pleased to know there’s a par time for each level. It’s hilariously short. I think I managed to hit par in one of the early levels, and that was it. It wasn’t even a consideration for me. Just getting through a level was more than enough of a challenge. I could see fans posting record-breaking playthroughs of their accomplishments, though. As I do not have any impressive accomplishments, I won’t be sharing anything. Sad, I know.

Fortunately, a calm electronic soundtrack and minimalistic visuals will (probably) help keep your blood pressure low. There’s a silly story about rescuing King Kombine from the Kave of Kaos. It’s lighthearted and told through humorous cutscenes. It’s not necessary, of course, but it provides a little something more to help elevate the game above others in its genre. I could do without the hypnotic flashing lights at the start of each chapter, though.

Why Is Everything So Hard?! 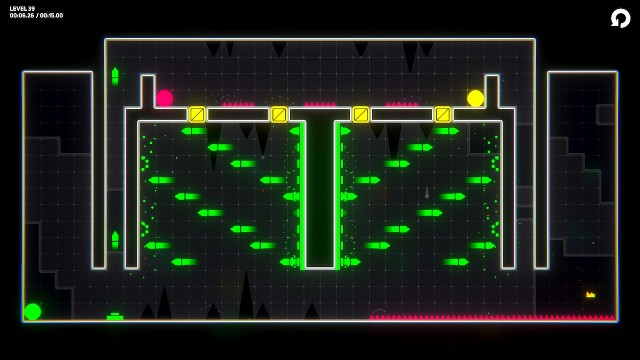 I’m generally not one to complain about a game’s difficulty, but Kombinera is hard. I mean, it’s really hard. It’s easily one of the most difficult puzzlers I’ve played in recent memory. It’s so well designed that I kept coming back for more, despite my coarse language and grumbling. If there’s one way the game could have been improved, though, it’s in tempering that difficulty.

I’m not suggesting the developers tone down their treacherous designs, but a little optional help for the player would have gone a long way in alleviating frustration. For instance, a single-use checkpoint you could use whenever you want or the ability to rewind ten seconds. That alone would have helped me through level 103 because I just could not get the timing right in one specific spot. I either hit a spike, got crushed, or, sometimes, even both! That was about three-quarters of the way through the level, which meant replaying the entire thing until I finally managed it—probably by sheer luck—on my eighty-fifth try.

It also doesn’t help that you only have one level available to you at a time. A new level only unlocks when you beat the current level, so you’re pretty much stuck until you figure it out. There are crowns in a few levels that unlock bonus levels—if you manage to get them. Those bonus levels are even more difficult than the normal levels. For some of the bonus levels, I literally have no idea where to even start, and even if I did, I doubt I could pull it off. 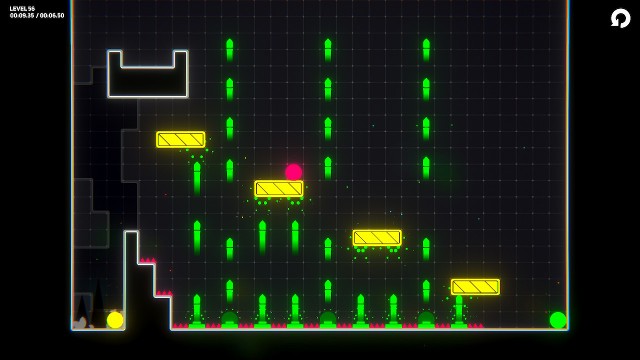 That aside, there is one more thing to mention before I conclude: when it all comes together, when you finally understand what you have to do and you do it—pure bliss. The feeling of accomplishment that results from completing a difficult level, frankly any level, is astronomical. I literally stood up and cheered multiple times when I stopped sucking so hard and succeeded.

Kombinera is a smart but vicious little puzzler. It doesn’t pull any punches. Fans of puzzle platformers should absolutely check it out but be warned: you’re bound to learn new some new colorful language before all is said and done. Despite its accessibility, it’s not for the faint of heart (or those with high blood pressure).