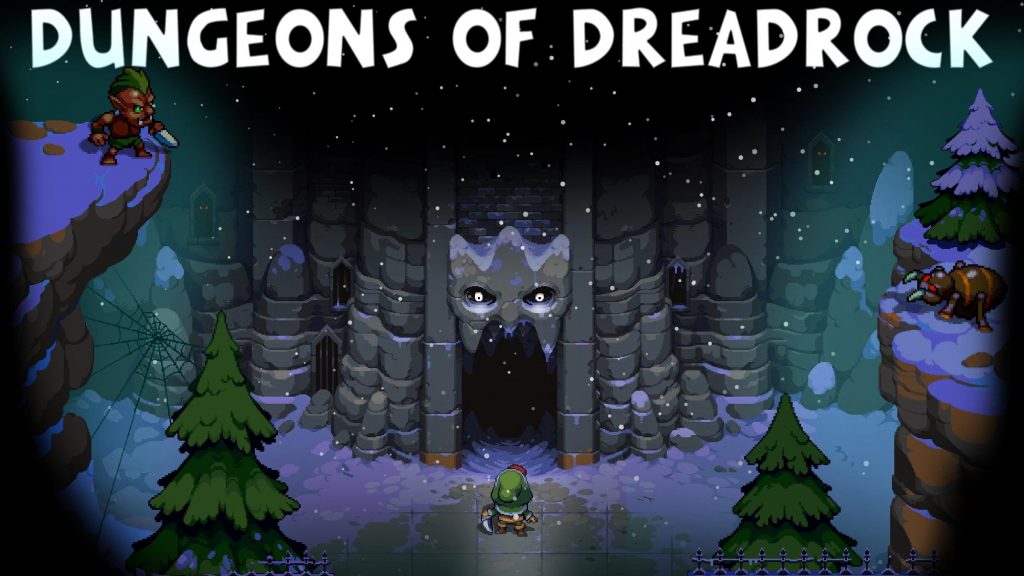 Dungeons of Dreadrock begins with a young woman and her brother camped outside the ominous entrance to a deep dungeon. The brother must venture into the depths to defeat an evil king of the underdark, but because of good old fashioned sexism, the woman is banned from doing so. When her brother enters and does not return though, the woman is so distraught she breaks with tradition she decides to enter the dungeon to search for her missing sibling. That’s where this particularly clever little puzzle game begins.

Each level is a new floor of the massive underground dungeon. To descend to the next one, you simply need to climb the stairs, but in your way will be a devilish combination of monsters, traps and fiendish puzzles. The monsters can be evaded or, once you’re a few floors in, killed with your handy knife. However, more often than not, the monsters end up being part of the grander solution to complete each floor. For example, on many floors there are giant treant-type monsters who stay rooted in place and attempt to attack you with their gnarled branches when you venture close. If you get off a quick slash on them before evading though, they’ll be forced back a square and this can be used to your advantage. They can be pushed into pressure plates that open up doors or shoved in the way of fireball traps, shielding you from their deadly effects and allowing you to proceed. 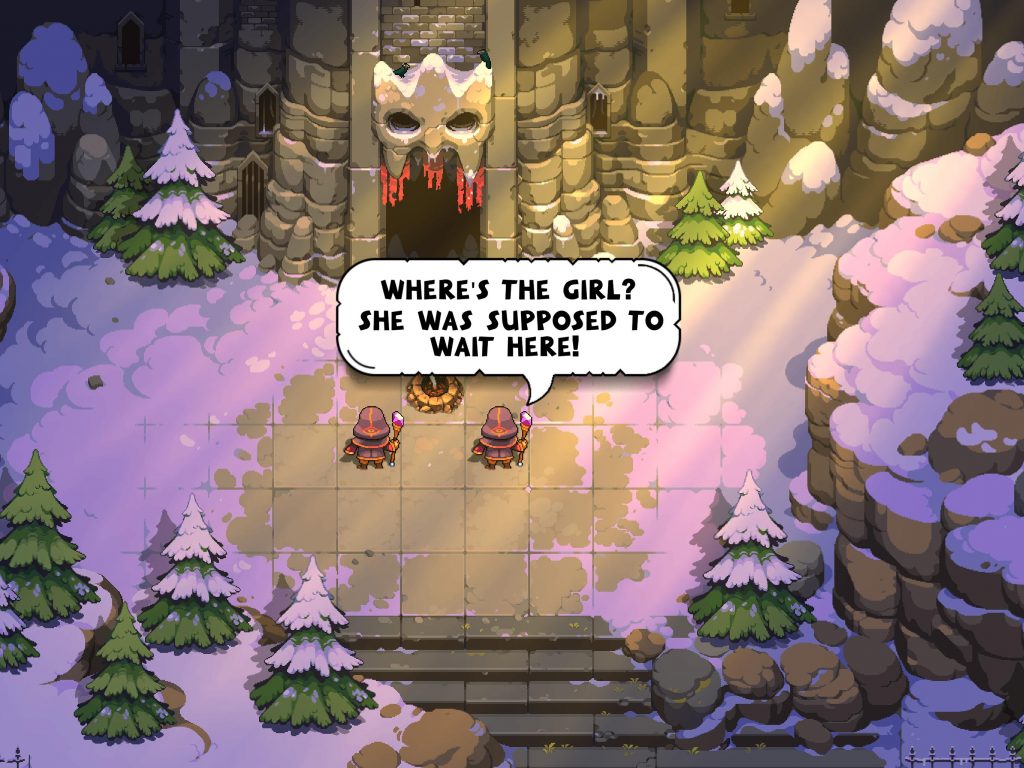 Likewise, many enemies in Dungeons of Dreadrock can be tricked into either their own demise or helping you complete the level. There’s one foe who will throw his javelin at you, but if you can dodge, pick it up and throw it yourself. Once he’s lost his spear, the impish creature will become obsessed with picking it up again even if it means inadvertently opening doors in the way of your goal.

There’s also a giant minotaur creature who will charge the player. Dodging at the last moment can send him speeding into another enemy who’s in your way, or through a portal and into a deadly trap, letting him suffer the ill effects on your behalf.

Given that your inhuman adversaries aren’t merely combat-oriented obstacles, but creatures with their own distinctive habits to be manipulated, this adds to the complexity of the brain-teasers on each floor. Many floors have puzzles that are more traditional, requiring you to examine clues or riddles so you can figure out which switches to pull, what order to place items in, or where the secret door is. However, adding the monsters into the mix makes things so much more exciting and animated instead of just looking at a puzzle and scratching your head. 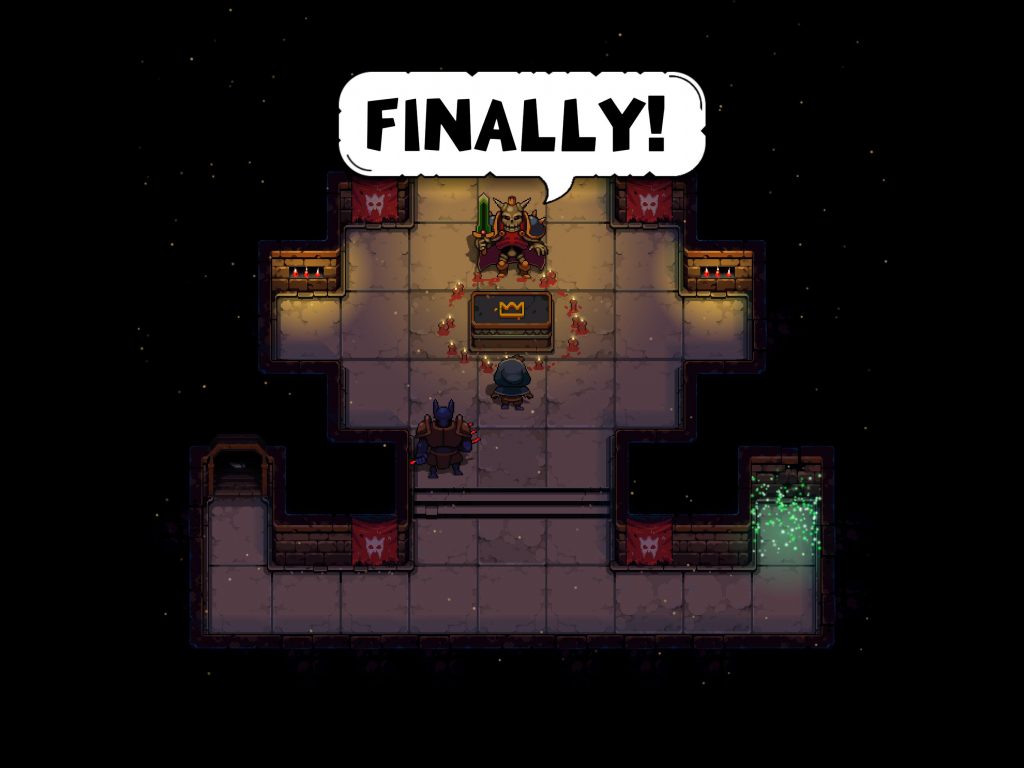 Many floors aren’t necessarily self-contained. It’s quite common to enter a floor where the solution to moving forward is actually backtracking to the previous floor. One example is where you need to get past a horrifying tentacle monster, and an obvious solution is simply to throw your knife into its exposed eye, causing it to retreat in howls of pain. However, deprived of your knife, it’s impossible to get past a nearby giant bug to the stairs. This requires you to go back to the proceeding floor and lure a dark elf archer down to shoot the beast. Other levels have you using particularly grim tactics like dropping a monster’s corpse through a trapdoor so they land on pressure on the floor beneath, opening a door to the finish.

There’s a lot of “thinking outside the box” moments like this that make Dungeons of Dreadrock’s puzzles more varied and interesting to solve.

Sometimes the puzzles are slowed down a bit by a new floor that seems completely baffling. Luckily though, once you’ve wandered around aimlessly for long enough a handy question mark will appear on the left side of the screen. Clicking on it will reveal hints as to the solution to the puzzle, becoming gradually more revealing each time you click on it. This is a good way to help players with the more opaque puzzles as the hints can point you in the right direction, but not entirely rob you of the satisfaction of figuring things out yourself. 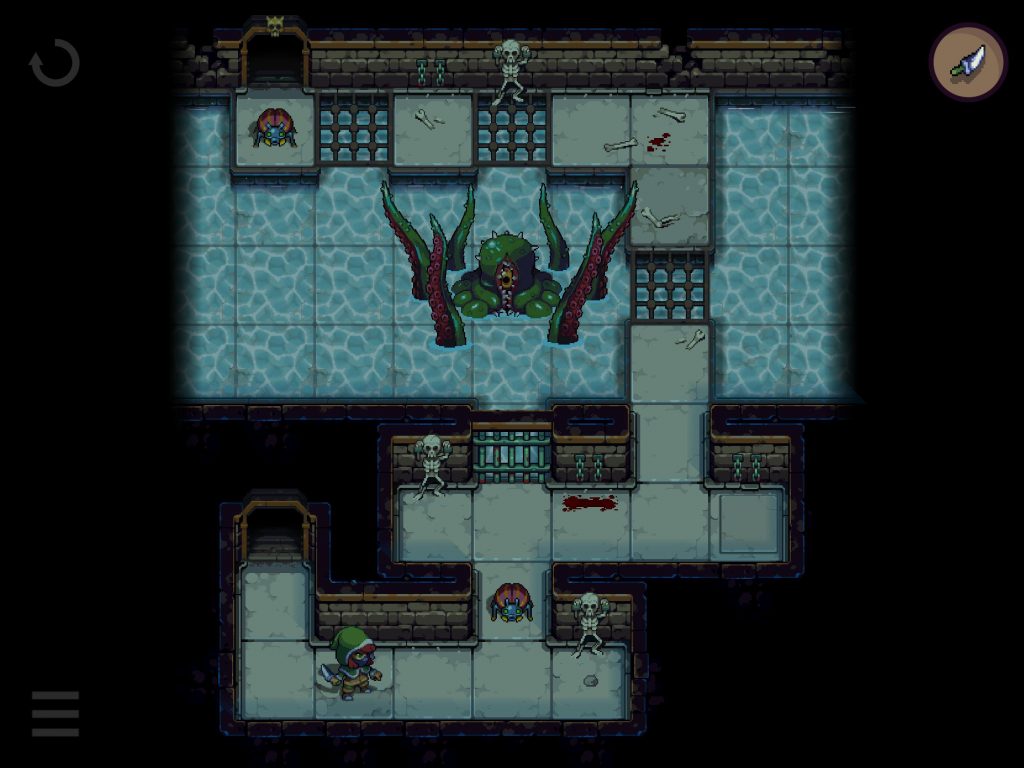 Periodically, the hooded main character will need to rest at a fireplace to regain her composure before venturing to the next floor and this is where the story is relayed. It soon becomes clear that the village elders who sent the woman’s brother on his dark quest aren’t as truthful as they first appeared and there are greater secrets lying beneath.

What’s amusing is how each observation from the narrator will first describe what’s happening in the story and then give a humorous little meta-analysis of it. One level ends with the narrator announcing that you need to hurry and save your brother as soon as possible but then there’s an annotation on the bottom telling you “don’t worry, there’s no time limit, so take your time”. This keeps the story exciting but also a bit wry and light-hearted.

Since the story in puzzle games is often an afterthought or just ancillary lore detached from the gameplay itself, I was quite pleased with how Dungeons of Dreadrock’s narrative was so well integrated. Not only is there the “Eureka” moment of satisfaction of figuring out the riddle contained on each floor, there’s also the drive to delve deeper into the dungeon and find the protagonist’s missing sibling.

Dungeons of Dreadrock is a bite-sized game that I’m sure would work perfectly as a bit of entertainment while waiting for a bus or train on its native mobile platform. However, it’s also great on the PC version as something to gently work out your brain while enjoying the fun narrative and very vibrant pixel-art graphics. This innovative puzzler combines clever yet accessible puzzles with a dash of humour to create a very enjoyable experience. Instead of just putting square pegs into round holes, you genuinely have to think outside the box, and finding the solution is always surprising and entertaining. Dreadrock is a dungeon well worth delving into.

Full disclosure: This review is based on a review copy of Dungeons of Deadrock provided by the publisher.