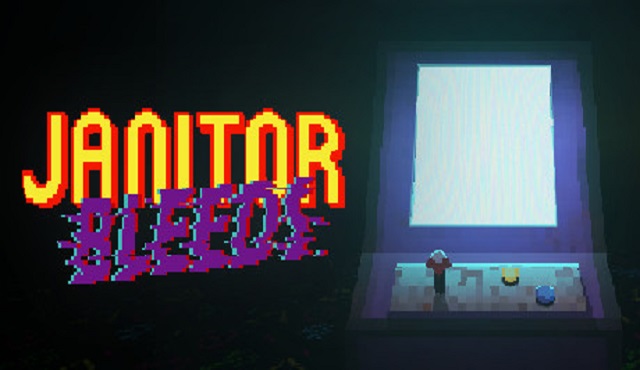 Sometimes a game’s success stems from a desire to go big, with oodles of new game mechanics and an epic story with rich characters. Then you have games that are effective because they relentlessly refine one core idea. Developed by indie studio Korpus, Janitor Bleeds’ most significant strength is that it doesn’t try to overcomplicate itself. It creates horror so effectively by delivering on its main concept: taking the comforting idea of playing a retro cabinet in an old arcade and turning it into something terrifying when you realize you’re not alone. 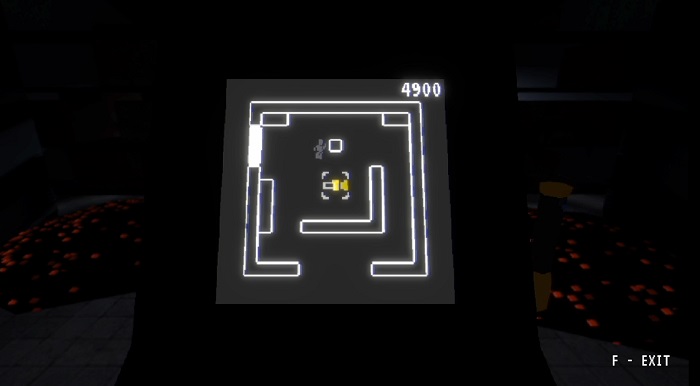 You know this is what you all came here for. I mean, just look at those graphics!

The plot is easy to follow. You get in a car crash and need to find help, wandering around the woods for a bit before finding your way to a seemingly abandoned arcade. You wander in and notice the place still has power, despite not a soul being around. It doesn’t take long for a few bumps in the dark to lead you to a strange arcade game called Janitor. Styled as a simple 8-bit puzzle/adventure game, as you clean up the water puddles as the digitized janitor, you start noticing that game’s got some strange properties, being able to summon items from the game to the real world and vice-versa. From there, the rabbit hole deepens with an odd, pixellated entity trying to hunt you down in the real world. Piecing together the rest of the finer details comes from a paper trail left behind by a former employee, and it keeps the narrative tight, not needing a bunch of unnecessary details to tell a decently interesting story. There are some levels of ambiguity that can be take-it-or-leave-it, but I felt it did all it really needed to with what it had.

As for the gameplay, again, we keep things simple. You can walk, sprint, find/use keys, crouch to get around obstacles, and interact with Janitor arcade cabinets. The meat of Janitor Bleeds’ gimmick is using the Janitor arcade game to get parallel real-world messes cleaned up, and, in turn, sometimes you need to send real-world keys and other items to the Janitor to make progress. It’s a unique duality that never makes itself annoying, spaced out just right, utilized in sensible ways. While the Janitor’s overall gameplay is basic, it’s in that simplicity that it does its best work as an extension of the overall game. It’s haunting to be playing a quaint old-fashioned arcade game while the entity is lurking nearby.

That said, there’s a mechanic for the Janitor game where you need to have three tokens to play it, but there are so damn many tokens everywhere that it rarely becomes a problem, and this whole currency system feels tacked on. There is the potential to get killed in the Janitor game that would require you to put in three more tokens, but that’s so rare that you can easily go through the whole story not even knowing you could die in this game-within-a-game. It would’ve made more sense to use the tokens for another aspect of the Janitor, like dropping a couple to distract the entity, or maybe adding in some other functioning arcade cabinets to earn a power-up or two by spending some excess tokens. Anything to make more use of them and add a risk/reward for having too many or too few. Ultimately, it’s a negligible mechanic but does come across as a missed opportunity.

Dusting off the Artifacts 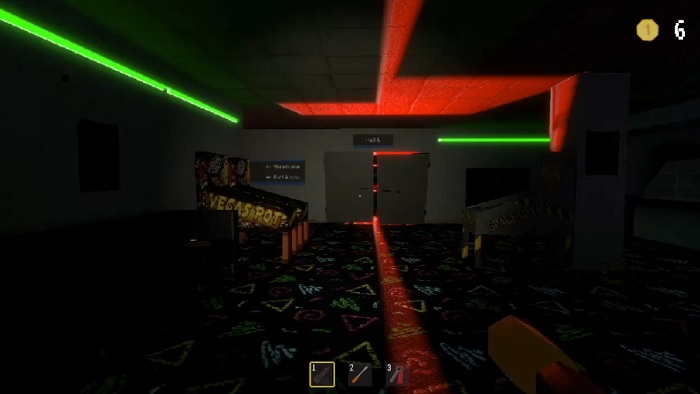 Yeah, uh…I’ll just clean that room up next shift…

While all of this sounds peaceful and easygoing, don’t think the strange pixel entity will let you waltz around like you own the place. Stealth segments are done in decently broken up segments, never overstay their welcome, and make you think on your feet to a decent capacity. You can get hit twice before you’re down for the count, but you’ll need to know where you can safely hide and when not to push the envelope with the entity lurking around the corners. It announces itself well with a bright cone of light and will distort your screen like you’re watching a janky VCR tape the closer it gets. What makes this work is it isn’t overbearing. It’s not making a beeline for you, it’s wandering around just enough so you have a good idea of how to avoid it, the fear and panic coming in with identifying if you have enough time to finish what you’re doing and get to safety before it does eventually make its way to you.

A good example of this is a part when you have to alternate between cleaning up messes in the Janitor arcade game to unlock the way forward while the entity is lumbering around the hall. I constantly got nervous watching my screen get screwy, wondering if I’d have enough time to skedaddle before that thing got to me. There was enough uncertainty with its movement patterns that I often thought to myself: “If it turns this way then I’m screwed” before trying to decide if I should book it or push my luck. Again, simple things make themselves work in this fashion. While the game checkpoints regularly enough that I wouldn’t lose much progress, just the thought of this thing creeping up behind me got me tense enough that I didn’t want it anywhere near me. The hidey-holes aren’t even all that safe either. Keep your flashlight on and you’re done, it’ll come right for you, and, in a surprise to me, it can just rip you straight out of the hiding spot you were crouched in and snap your neck like a twig.

Swept Up In The Memories 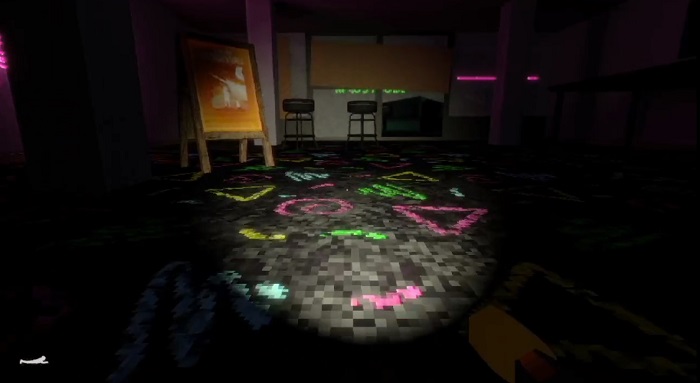 Pretty sure the nostalgia from seeing that carpet gave me arthritis

As for the scares and atmosphere? I’ve always enjoyed arcades, ever since I was a kid and, even though they were phasing out when I was younger, I still get a lot of nostalgia from them. Seeing that ’90s-esque carpet brought back a lot of memories of my local skating rink and the Aladdin’s Castle in my local mall. Something about seeing a place like that defiled in such a manner that Janitor Bleeds brings is a very unique experience. Seeing my nostalgia overridden by fear made the whole adventure stand out more. When tarps draped over arcade machines suddenly are soaked in blood, or I’m forced to crouch and shuffle through a warehouse graveyard of old arcade machines, I started to see my favorite locale in a different light. That brought a special kind of horror factor to me, and an atmosphere I’d love to spend more time in.

As for the scares, I mentioned above a lot about how the monster brought in the panic attacks. That said, the entity isn’t the only thing around to scare you. There are some tastefully laid out corpses that like to do disappearing acts from time to time, but what makes them work is the subtlety. There’s no scare chord (though there is tense music that will play at very appropriate times), no shaking camera, just you witnessing something bloody and ghastly in the cone of your flashlight before vanishing off.

There were times when the scares were front and center too, but it’s done in such a way that doesn’t want you to jump, but to dread, and that’s the ticket I came to this arcade for. The bits and bites of the occasional shifting noise behind you while you’re playing on Janitor, or red light looming around a corner that added tension and creepiness. There’s a few attempts with the corpses that wind up feeling a bit out of place, but ultimately, it did far more to help than hinder. I think the low point of the game was honestly towards the very end of the adventure. I didn’t quite feel the impact I wanted to from the final boss. Simply put, you’re given a tool for the last and second-to-last boss that changes up the gameplay, but doesn’t feel like it adds much to the experience. I’ll refrain from spoilers, but I didn’t quite feel the end matched up to the suspense and tension I experienced in the rest of the game. I will say that you’re only gonna be getting about an hour of content, so don’t go in expecting a long-lasting experience. It’s a bit disheartening that the ride, fun as it is, didn’t last long at all.

Cleaning Up the Competition

There’s so much good going for Janitor Bleeds, creating plenty of scares with its well-executed main concept of having to play an arcade game while stalked by a mysterious entity. Sadly, there are some flaws. I do wish the ending had a bit more going for it, the main story only lasted about an hour, and the token system is woefully underused. Nonetheless, for the low price tag, fans of old-school horror games shouldn’t miss out on this little cabinet of spooks.