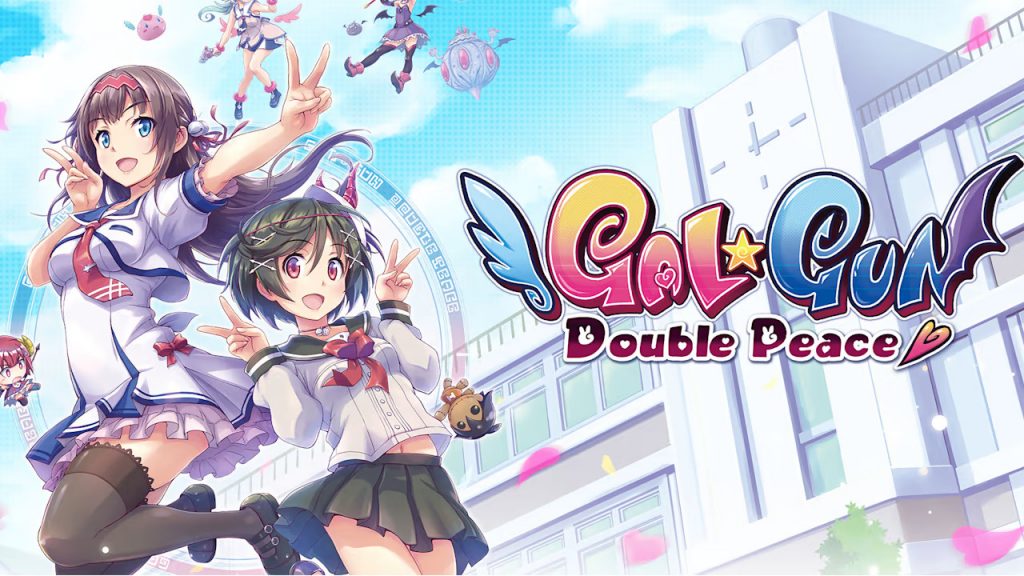 As someone who grew up in the early 90s, I can’t help but see Nintendo as the guardian of family-friendly gaming. After all, I still remember when the Big N famously delivered players a goreless Mortal Kombat on Mortal Monday back in 1992. And, the following year, when Nintendo Of America’s Howard Lincoln publicly shamed his competitors, pledging in front of the United States Senate that the hugely controversial Sega CD release, Night Trap, would never appear on a Nintendo Platform (spoiler alert, it did).

So with the hardware giant’s once-squeaky clean image in mind, I still find it hard to believe that, seven years after its debut on the PlayStation 4, Gal*Gun: Double Peace has brought its trigger-happy brand of debauchery to the Switch. However, here we are, and Nintendo’s handheld hybrid console owners are free to fling pheromones at lusty schoolgirls to their hearts’ content. But is this racy rail shooter worth your time? Read on and find out! 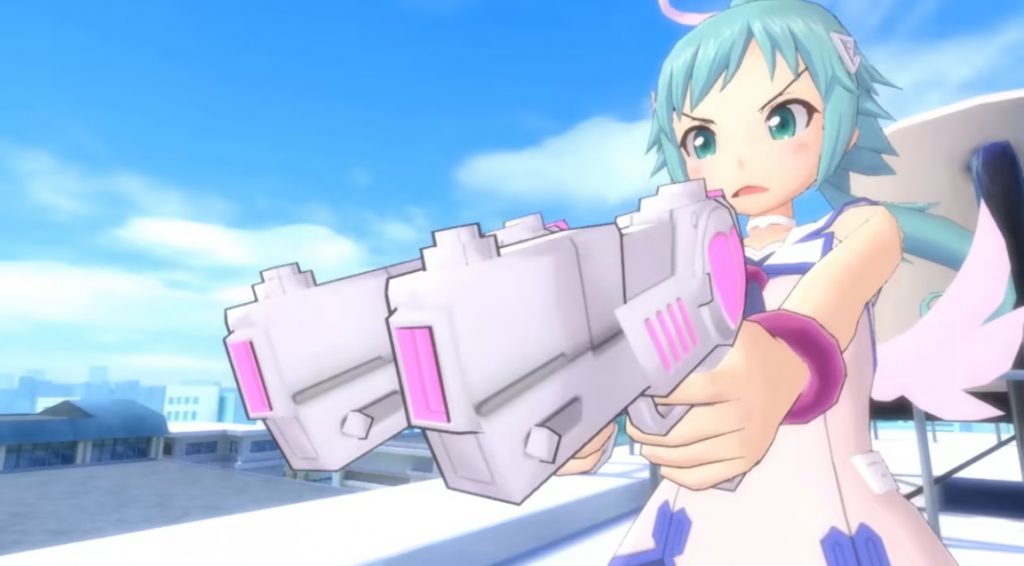 You play as Sakurachi Academy student Houdai Kudoki. After a cupid named Ekoro accidentally blasts him with a powerful arrow while trying to subdue a demon, every girl in the school becomes madly in love with him. While this sounds like Houdai’s lucky day, Ekoro’s gift comes with a hell of a caveat. If he’s unable to find true love by the end of the day, he’ll be destined to spend the rest of his life alone.

If you’ve ever played a rail shooter before, you’ll know exactly what you’re getting yourself into. Gal*Gun: Double Peace closely follows the formula established by games like Virtua Cop and The House of the Dead, albeit in a much more lighthearted way. As the camera pans across the game’s seven stages, enemies will jump out from behind trees, cars, and windows, and you’ll need to (lovingly) dispatch them. Some will rush up to you and attack you with fists clutching love letters, while others will loudly proclaim their love for you, and you’ll have to shoot the words out of the sky before they reach you. Perhaps the most amusing are the ones who’ll knock you to the ground and stomp on your genitals. Thankfully, you can purchase an Angel Groin Protector from the Academy Shop that mitigates the damage to your precious family jewels.

With lovestruck teens crawling out of the woodwork to profess their love for him, Ekoro gives Houdai a gun that fires pheromones. It’s a ridiculous weapon, but it gets the job done. Each schoolgirl has a weakness that you can discover by aiming your gun at their head, chest, hips, and legs. Manage to shoot the right spot, and you’ll perform an Escstacy Shot, which causes your pugilistic would-be paramour to collapse with pleasure. Your standard shot starts out pretty weak, so it’s best to focus on doling out Ecstacy Shots to thin out the legions of ladies. Additionally, holding down the fire button dishes out a charged shot, spreading the love with a powerful area of effect. 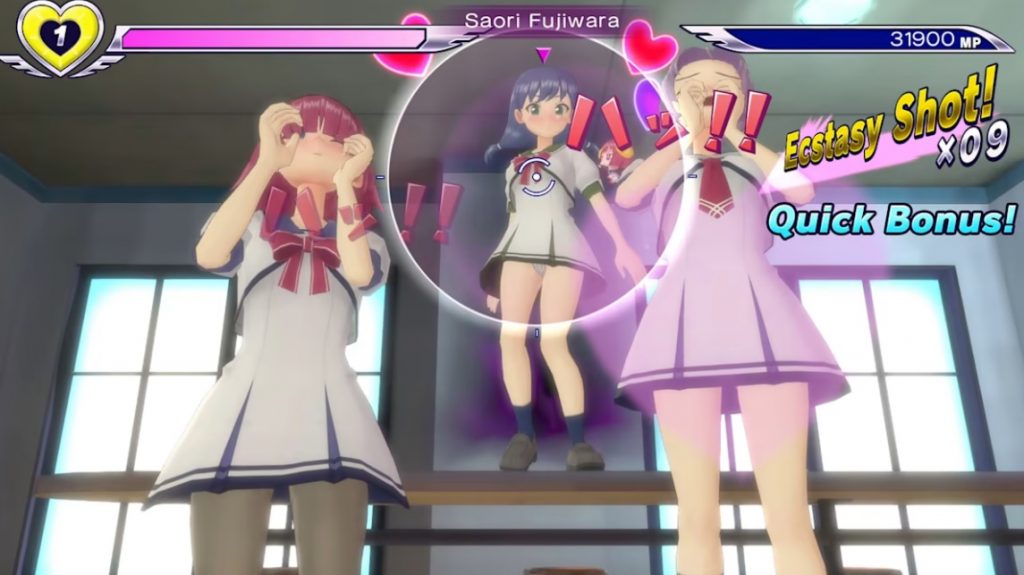 Gal*Gun: Double Peace doesn’t pretend to be something it’s not. It’s a no-frills perv-’em-up that emphasizes fleshy fanservice above all else. While it can be fun to zone out and fire away at the frenzied females lurking around every corner, a lack of enemy types and sterile, unexciting levels can make the action start to feel monotonous. To make matters worse, while the game features seven episodes, you’ll revisit the same few areas multiple times throughout the story. Multiple paths occasionally appear to offer a pinch of variety. Unforunately, they don’t offer anything particularly exciting, so you’ll be hard-pressed to want to revisit each area to see where these alternate routes take you.

Before each mission, you’ll be able to take on requests from NPCs, which invariably have you looking for a hidden item like a pair of panties or a notebook hidden inside a locker or somewhere else on the stage. If you manage to find these items, you’ll earn Angel Feathers that you can spend at the Academy Shop between missions. Here, you can increase your attack power and health, as well as purchase items to enhance your intelligence, athleticism, style, and lewdness. Upgrading these stats is necessary to unlock specific dialog options during the game’s cutscenes, where your answers end up determining which of the leading ladies you’ll end up courting at the end of the game. 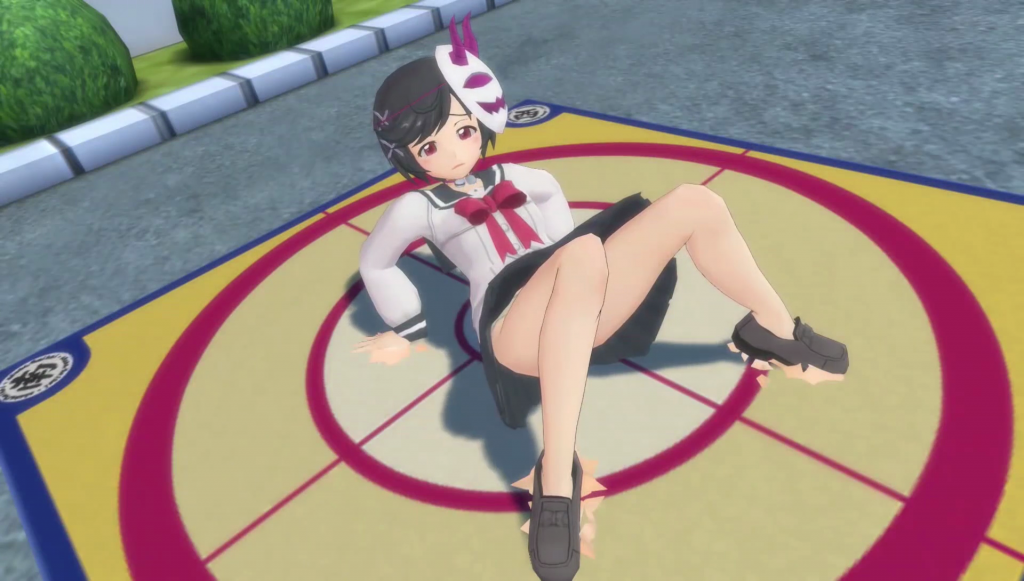 If these dialogue options did more to expand the story, I could see them being a great way to get some mileage out of what’s admittedly a rather thin experience. But unfortunately, the conversations never really extend beyond small talk or attempting to straight up grope your love interests. I’ll be the first to admit I’ve no problems with crude humor. However, some of these moments just felt downright creepy and almost made me want to stop playing altogether. As gross as the dialogue scenes can be, the Doki Doki mode is by far Gal*Gun: Double Peace’s most uncomfortable feature. It essentially sucks you into an alternate world for a brief while as you poke and prod your adolescent assailants all over their bodies until they collapse in euphoria, creating a screen-clearing explosion. It’s pretty gross, to say the least. Thankfully, you won’t have to use Doki Doki mode often. Gal*Gun: Double Peace is so easy that most players should be able to complete the game without losing a life – especially if you take the time to buy upgrades regularly.

Revisiting Gal Gun*Double Peace for this review, I’ll admit that my feelings have soured quite a bit. Maybe it’s because the shock factor has worn off, or perhaps my tastes have changed a bit in the seven years since I last played it. However, I can’t stress enough that I’m not exactly the game’s target demographic. While I’ve played my fair share of fanservice-filled games like Senran Kagura and Hyperdimension Neptunia over the years, writing for Hey Poor Player, I’ve always considered those elements to be more of a glitch than a feature. If you’re eager to perv it up and send schoolgirls into a frenzy, you’ll find plenty of that here; especially given that the Switch port ofGal*Gun: Double Peace features all of the game’s previously-released DLC, including tons of risque costumes you can dress the game’s leading ladies up in via the dressing room mode.

Gal*Gun Double Peace makes the jump to the Nintendo Switch fully intact and slightly undressed. Whether flinging pheromones at frisky schoolgirls on your TV or in handheld mode, the game runs well and its vibrant visuals, while not particularly detailed, still manage to pop off the screen the same way they did when it was first released in 2015. Solid performance aside, however, just how much enjoyment you’ll get out of this risque rail shooter depends on what you’re looking for. If you’re already a fan of the franchise and itching for more fanservice-filled firefights, you’ll undoubtedly find those here. However, if you’re looking for a satisfying shooter that will test your reflexes with thrilling boss battles and exciting locales to blast your way through, I’d probably wait for The House of the Dead: Remake to shuffle its way onto the Switch instead.

Full disclosure: This review is based on a review copy provided by the publisher. 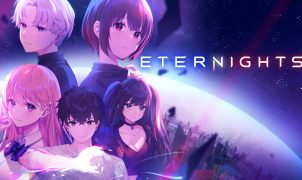