The Alien Cube Review: So Close to Stellar 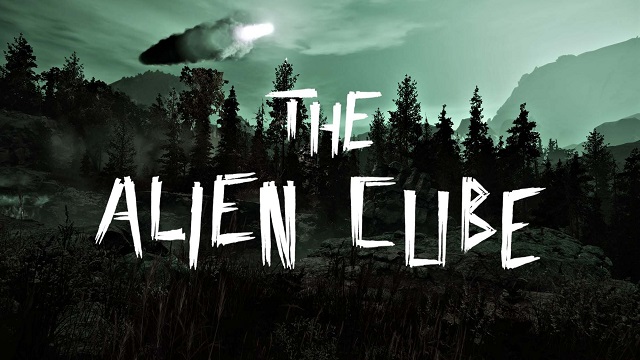 You know, sometimes life just requires a virtual walk in the park, and The Alien Cube certainly seemed eager to give me one right out of the gate. See some nature, visit a couple of ruins, and sometimes come across ancient glowing cubes belonging to eldritch abominations. That’s right, folks, we’ve got some good ol’ Lovecraftian horror to walk through. But is this supernatural hike out of this world? Or is it about as much fun as getting probed? Let’s find out!

The Cabin on the Borderland 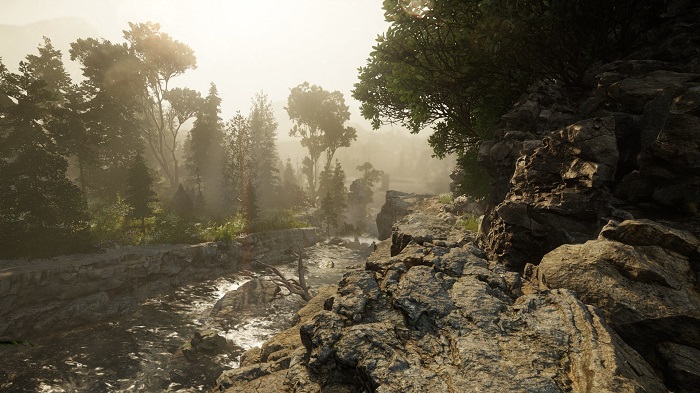 The only thing surreal here is how one single person managed to sketch up this level of exquisite detail.

In The Alien Cube, you play as Arthur, who just now moved into his new home but is not quite settled in. He receives a letter from his now-disappeared uncle, gifting him his apartment and his cabin in the woods on the agreement that Arthur disposes of all of his manuscripts. This all seems a bit shady, but Arthur gets his stuff together to go see what his uncle was up to. From there, the cultish references and strange events just start piling up, leading Arthur along an eldritch breadcrumb trail that goes full swing when he finds the titular Alien Cube. As far as Lovecraftian horror goes, it really does hit all the right notes, but I couldn’t feel anything for the protagonist. He rarely speaks, and while it’s fairly well voice-acted, his lines are limited, and he never really gets much of a chance to flesh out a personality of his own. Still, one could argue the real character here is the horror we find along the way, which is best described through pages scattered along the way, so while Arthur might be lacking in the depth department, the story itself is far from dry.

Next, we’ll take a look at the visuals, and boy, do they steal the show. I’m going to go ahead and preface this by saying The Alien Cube was developed by one person. I’ve said it in other reviews, and I’ll say it again here, creating games with a staff count of one person should always be viewed with a level of respect, regardless of the outcome. I’ll be the first to admit the visuals are absolutely gorgeous, with the lighting spot-on, the greenery lush, and the interiors are well designed and well-decorated. I occasionally had some brief moments of pop-in, but it corrected itself in a couple of seconds and didn’t happen all that often. For one person alone to put together this level of refinement is actually pretty jaw-dropping.

That said, The Alien Cube isn’t the most optimized game out there. Even on lower settings, my computer started picking up fan speed when loading things in. When loading screens can take over a minute, even on an SSD, there are some technical aspects that really need addressing. I even had one of the levels not load any visuals, leaving me on a black screen. The game was still playing, and I even died, but had to restart my computer just to finally see what was going on.

As for technical and gameplay aspects, the game performed pretty darn smooth, with not a single skipped frame even on the highest settings. I definitely enjoyed the frequent use of 3D audio, and the quality of the audio mixing gave a welcome bump to the immersion factor. The alien screams, crackling thunder, and even footsteps felt well balanced and realistic. The controls are kept simple, and, thankfully, there aren’t any stealth sections! There are some chase scenes, but I never felt lost, and any puzzles presented to me were pretty quick to sort out. If you do manage to find a way to off yourself, you’ll respawn at your last checkpoint (which are pretty darn often) with little time lost resetting you back in place.

Another thing to keep in mind is that The Alien Cube does have a bit of an issue with lighting, so you might bump up the brightness a touch to see what you’re doing better. It’s worth noting that this is indeed what’s referred to as a walking simulator, with light platform jumping and puzzles, so it’s not advised to go in expecting a grand adventure with daring feats and fancy footwork, because these systems really don’t contribute all that much to the experience. Things are kept limited to keep the horror high and frustrations low, so do take that into mind when boarding this crazy train. Also, keep in mind that this is far from a long experience. I cleared this in under five hours, so you’re not going to be on the ride for long.

(Almost) At The Mountains of Madness 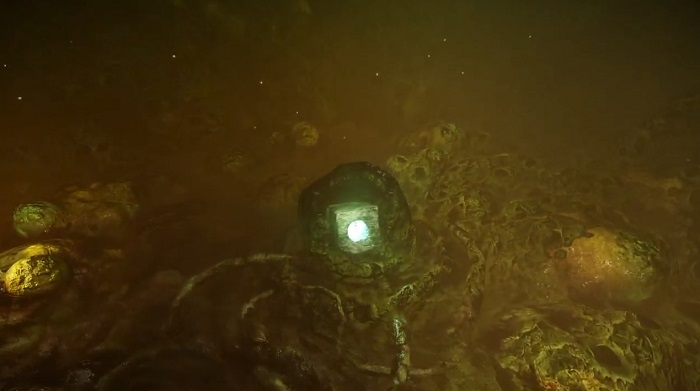 The Allspark’s looking a bit rough these days.

Now for what you’re probably wondering about: Horror and how the game uses it. Aliens provide a special kind of horror, in that you literally cannot know what to expect, and this game pulls this off very well. During your whole playthrough, you only get vague images and ideas of what you’re up against, just as eldritch horror should be. The best example of this is the chase scenes, which were honestly my favorite part. I wasn’t running because there was a reward at the end of the chase. I wasn’t running because that’s the victory condition. I was running because I didn’t know what was chasing me, and I didn’t want to know what was chasing me. There was a primal fear sitting in those chase scenes, and that’s the kind of stuff I want from horror. Something to keep in mind here is that this is indeed surreal horror. There’ll be many things that don’t make sense and/or never get explained. That’s just how Lovecraftian horror tends to work, so while you’ll be seeing enough recurring themes to follow, there will be quite a few sprinkles of oddities that you can only look at and think, “I don’t know what that is, and I don’t think I want to know what that is.”.

That said, its attempts to scare me any further fell a bit flat. The occasional glimpse of something running past a window, odd noises from the blue, they all started to get a bit repetitive, which is a shame. I feel like more variation in the scary extras would’ve helped keep the spook-factor high without oversaturation. The levels are quite expansive, but for all the room to run, there’s not a lot to see, and it feels like a missed opportunity to reward exploration with a few more nuggets of fear and tension. For example, when in the surreal, vision-like areas, having dozens of eyes watching from beyond the treeline when you get close to it would’ve definitely put me on edge, or maybe having one of the pages from the journal cause a shadow over your shoulder, like something was reading behind you. There was so much room to play with the surrealness that wound up feeling like wasted space.

A Journey Fit For The Old Ones

The best way I can describe The Alien Cube is a very thin slice from an authentic Lovecraftian pie. It doesn’t entirely look the part, but you’ll take a bite and know exactly what you’re sinking your teeth into and probably end up reminded why you love this flavor of horror. From the surreal environments to the indescribable horrors after your blood, it’s the stuff known and loved by the Lovecraft community. Be warned though, that while the flavor tastes the part, The Alien Cube‘s optimization issues and occasionally lacking gameplay can make it tough to swallow. That said, if you can forgive a few missteps and have a hankering for hellish horrors, it’s worth digging into – especially when you consider its asking price.

They sure did change it like a remix, but did they raise it like a phoenix? Fenix Furia is not a first-timer here at Hey Poor Player. It seems…