Crystal Clash Review: What You See is What You Get 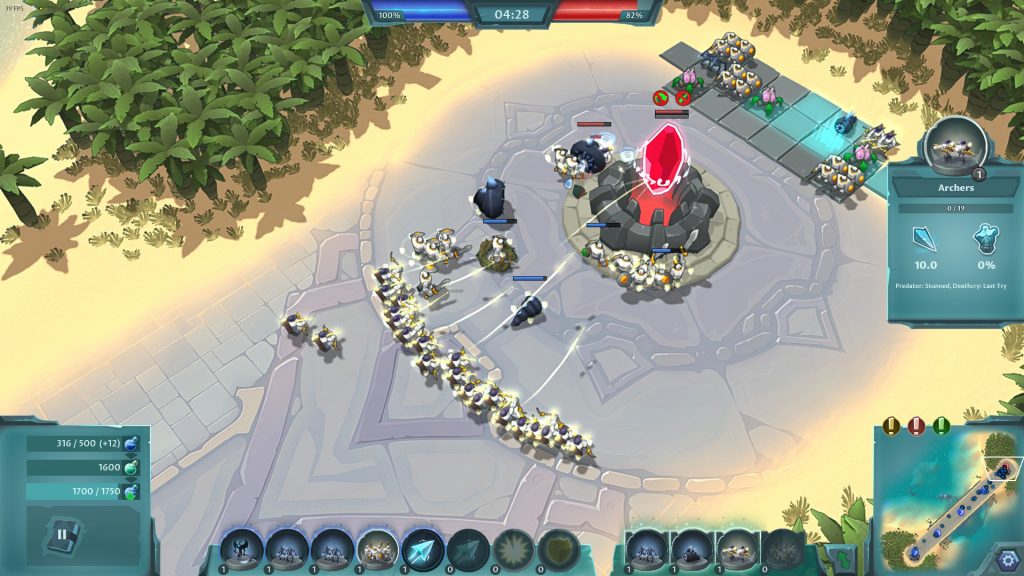 Deckbuilders have always been something of a “rare indulgence” for me. While I don’t find myself playing them very often, almost every time I do dip into one, I generally end up thinking to myself something along the lines of “woah, I forgot how much I love these” and end up seeking out more of them—a habit which, not surprisingly, eventually led me to Crystal Clash, the game that I’m reviewing today. Generally speaking, I’m not terribly picky when it comes to deckbuilders. Just throw an interesting premise, some cool mechanics, and gameplay that’s at least halfway balanced and I’ll be happy. There are so many fun and unique ways to create games based around building a perfect (or at least your own version of “perfect”) setup that allows you to seamlessly carve through your foes that I didn’t think that I’d ever come across a bad one without trying. And, so far, I haven’t, because Crystal Clash is, by no means, bad. But it I’m not sure how far into “good” territory it wanders, either.

It’s been a while since I’ve reviewed—or even played for fun—a middling game that sits within the territory of being “just fine,” but it seems as though I’m finally here once again thanks to Crystal Clash. And, in all honesty, games like these are some of the hardest to review. If it’s great, I can sing its praises—and I can do just the opposite if it’s a real stinker—but what in the heck am I supposed to write about when what I’m reviewing is the video game equivalent of simultaneously nodding your head and shrugging your shoulders? There’s only one way to find out, I suppose! 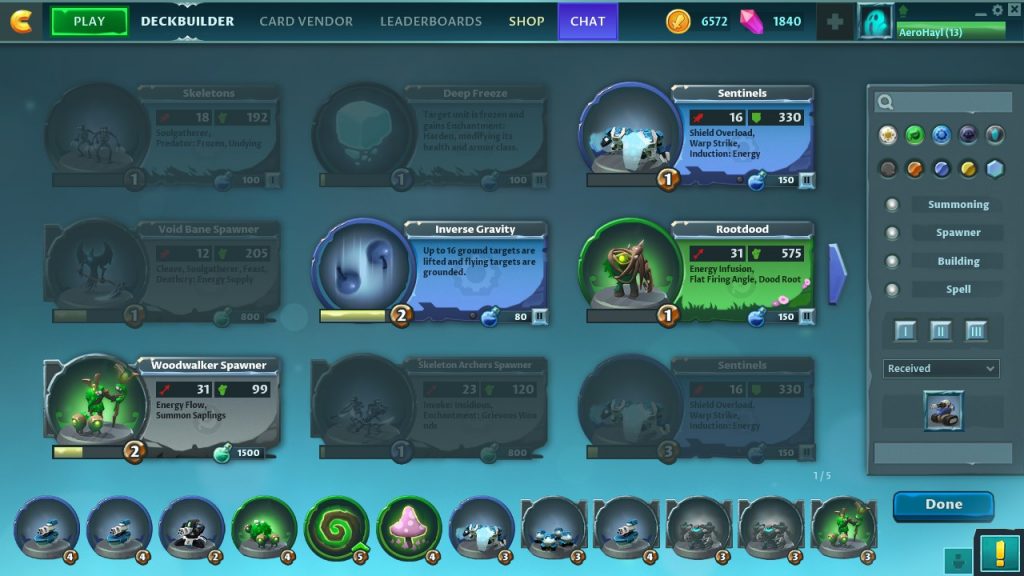 Spots are limited, so choose your cards wisely!

So far, I’ve been doing nothing but painting Crystal Clash as a deckbuilder… at least from a gameplay standpoint, anyway. And, don’t get me wrong—it totally is. But, like, that’s not all it is. I mean, it would be kind of weird if you spent the entirety of a game putting together the perfect combination of cards only to do literally nothing with them. I mean, I’m sure a game like that exists, but that game isn’t Crystal Clash. No, truthfully, that’s only half of what this game’s about—in reality, Crystal Clash is a deckbuilder/RTS. But, seeing as how you can’t march into battle if you don’t have anything to fight with, we’re going to stay focused on deckbuilding for just a little while longer.

Creating the perfect deck in Crystal Clash might not be the easiest thing to do, but creating a deck is actually quite easy. A standard deck consists of 12 cards, with the player being able to freely choose among creatures that they can summon onto the field, powerful spells, and spawners—incredibly important constructs which automatically spawn creatures for players over time. Barring the fact that a single deck can only hold up to two of the game’s four legions, this game’s versions of elements (plus a fifth one that’s always accessible, regardless of setup), there really doesn’t seem to be a limit on what you, as a player, can do when it comes to how you’d like to set things up—and this is where things start to get pretty interesting. 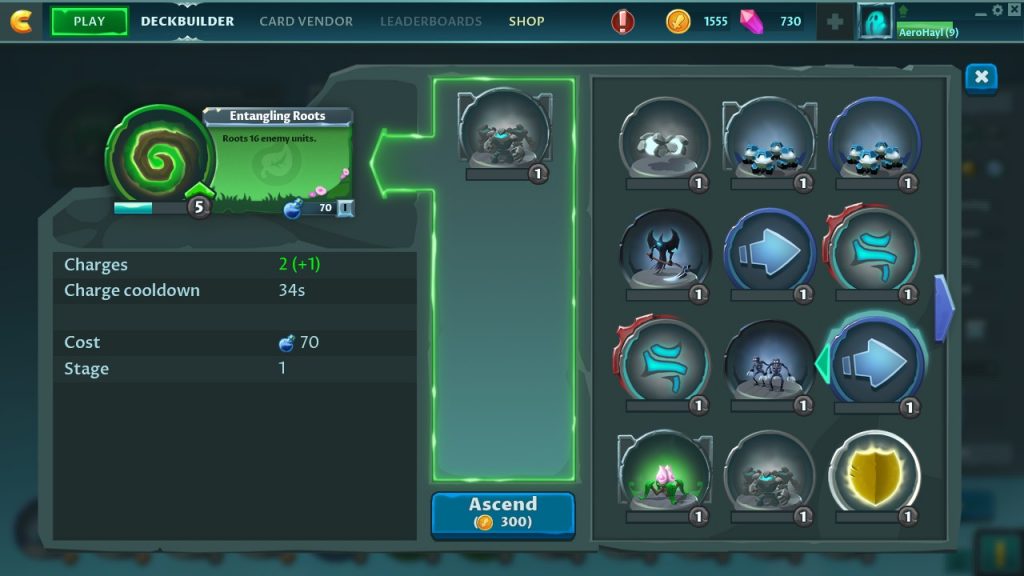 You can also upgrade your cards if you can’t say goodbye to an old favorite!

Crystal Clash is, by and large, a 2v2 game, and this means that, should you have at least one friend that you can convince to play with you, the potential to craft some pretty stellar setups absolutely exists. Even as someone who, unfortunately, flew solo for the duration of their time within the world of Crystal Clash, I still had plenty of fun trying to find ways of supporting the random people I would get paired with. Given that the pairings were random, it didn’t always work, of course, but when it did it was a lot of of fun. At least for a while, anyway.

Crystal Clash has one persistent problem that plagues both its deckbuilding and RTS aspects, and that would be its tendency to quickly become stale. While the game does offer variety to players via different legions and the various cards within each legions, it also presents them in a way that feels incredibly progression-based. Now, I’m not going to pretend for a second that deckbuilders don’t have tiered cards. Finding better and rarer cards as you continue to play is kind of a major part of the genre, you know? But the fact that Crystal Clash presents cards to players via what can only be called a skill tree—one which requires players to complete missions before they can purchase better cards—kind of made it hard for me to appreciate anything that I was holding on for for too long (outside of a handful of spells, at least). Of course, I’m not saying that the game immediately makes the lower-tiered cards obsolete as soon as you get higher-tiered ones—especially given the fact that you can upgrade cards (which is a really neat feature, by the way), but the railroad-y way that Crystal Clash makes players feel like they need to constantly be upgrading their decks in specific ways diminishes that all-important feeling of autonomy that typically comes with games like these. 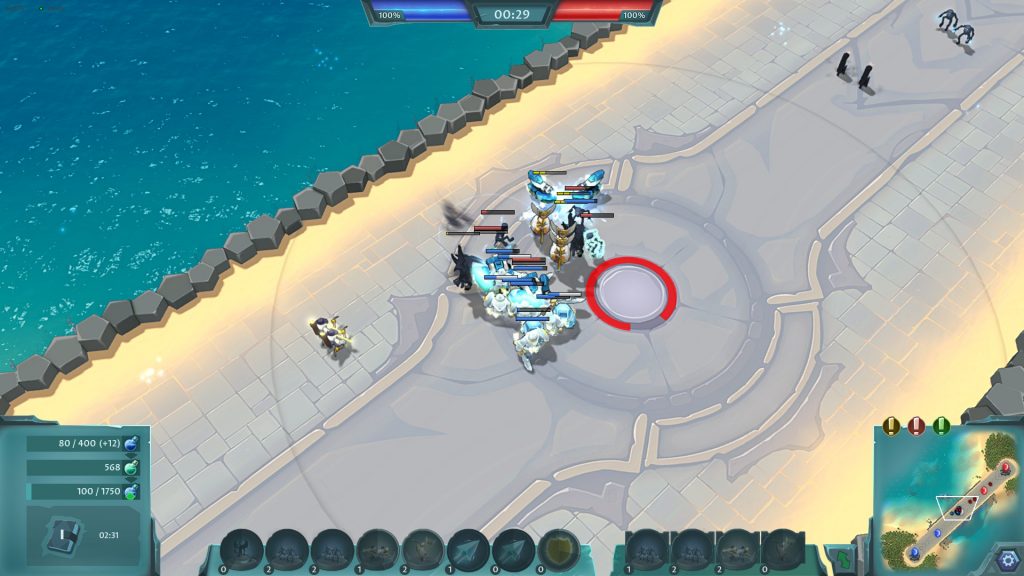 Struggling for control of the center can be a real nailbiter sometimes!

Despite the fact that I still haven’t at all talked about it in this review, Crystal Clash does have an RTS segment, and it is a very important part of the game! Keeping in line with its more strategic half, Crystal Clash‘s more action-oriented half is also easy to understand and, above all else, incredibly straightforward—both literally and metaphorically. 2v2 Matches, the game’s bread and butter, take place on an entirely linear battlefield that has player groups slinging troops and spells back and forth at one another in an attempt to destroy the opposing team’s crystal. Initially, players can only summon their minions near their own crystal, but as they take over more land they’ll find themselves able to have their fearsome fighters touch down just a little (or a lot) bit closer to their enemy’s home base… and that’s about all there is to it! It’s really that simple.

As someone who mainly stuck around in the bronze and silver tiers, I can’t say that I was up there Crystal Clashin’ with the best of them. But, from where I spent my time stomping around, battles were pretty much decided within the first minute of combat. Out of the countless battles that I went into, I can distinctly remember four different times when the tides were turned partway through the battle. Despite all of the cool stuff that’s going on in the middle of the battlefield, it really doesn’t seem like “real-time” portion of the “RTS” half Crystal Clash holds up all too well. It’s easy to find ways to mess with people early on (my favorite was casting Entangling Roots on the other side as soon as the battle begins, because spell areas aren’t limited like summons), and, if other people don’t have any way to counter it (which they usually don’t), you can see your victory (or loss) coming from a mile away. 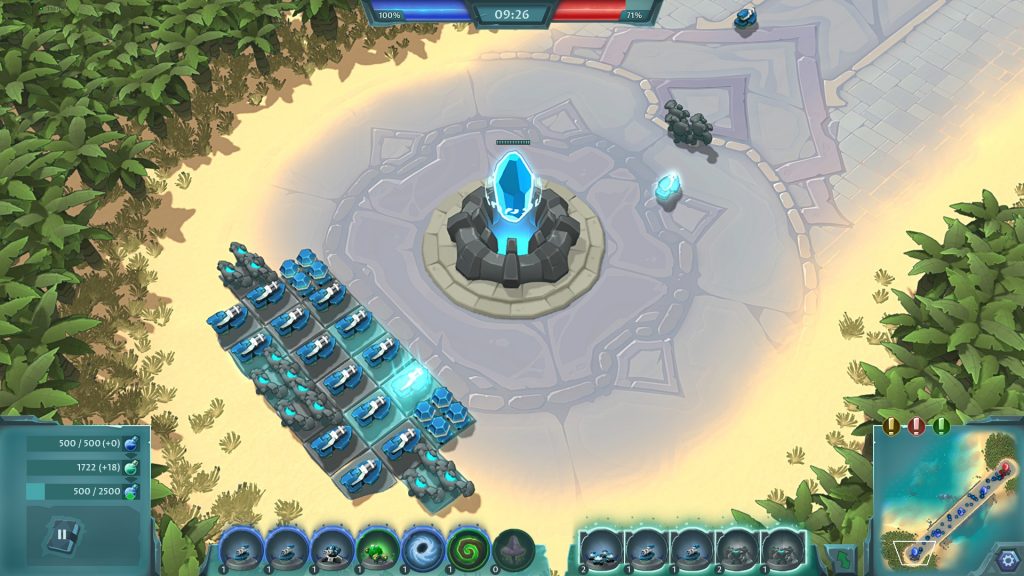 Now THAT is a lot of spawners!

I’m not just saying this to toot my own horn, either—I’ve had people do similar things to me, too. It’s absolutely infuriating having the battle decided for you the minute it begins because you didn’t have some kind of counter for a specific spell, and I can’t help but feel as though the meta (or at least the low-mid tier parts of it) relies a bit too much battles either being one team (or, more likely, one individual), pulling the rug out from the other immediately, or a massive stall war that lasts for way too long because the “different units” aren’t actually all that different from one another.

I Can See It Coming From a Mile Away

Crystal Clash, much like the battlefields on which it takes place, is very middle-of-the-road. It has some legitimately cool ideas, and I won’t even begin to pretend that I didn’t have fun with it, but, between its overly linear approach to deckbuilding, and its equally (albeit purposefully so, this time) linear approach to combat, I feel like this game still has some growing to do.