Zombie Rollerz: Pinball Heroes Review: As Mindless As The Undead 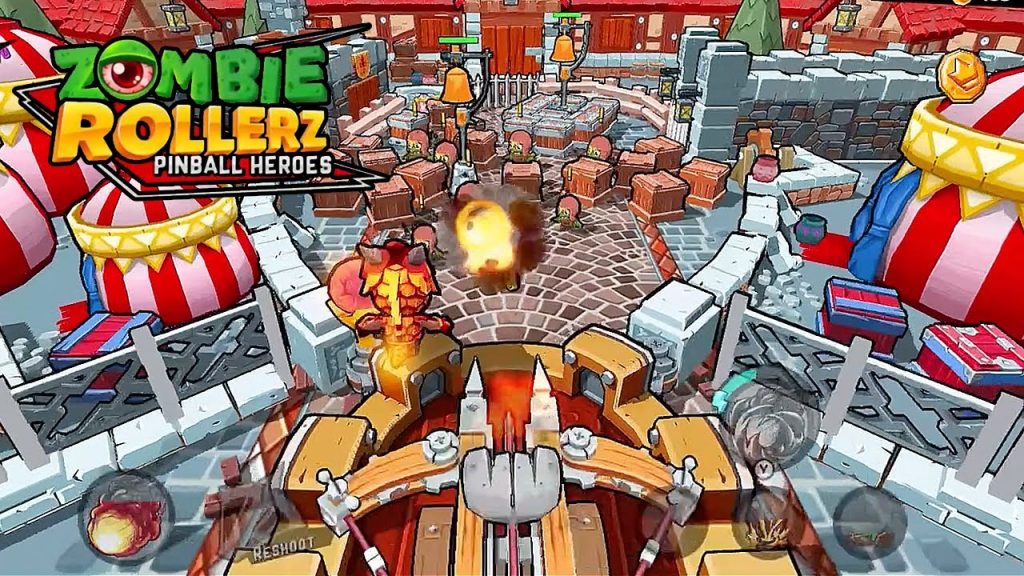 Having already debuted on mobile, Zombie Rollerz: Pinball Heroes has finally landed on the Switch. The Switch is a device that has already proven itself to be the perfect home for bite-sized blasts of arcade action, so on paper at least, it seemed an ideal fit for Zombie Rollerz: Pinball Heroes mash-up of pinball, tower defense, and rogue-lite action. 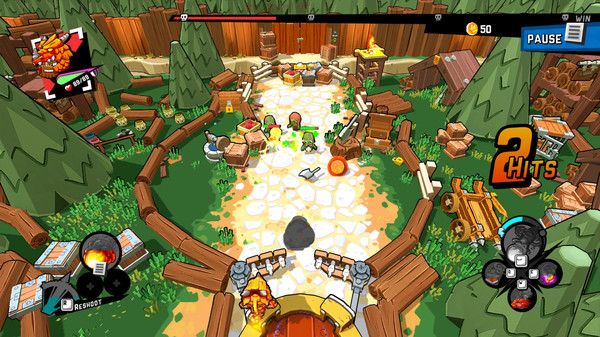 There is no denying that Zombie Rollerz: Pinball Heroes has an interesting hook at first glance. Mixing pinball with zombie tower defense, players need to use familiar pinball mechanics to fend off the waves of zombies making their way down from the top of the map. Maps are structured like pretty traditional pinball tables, with various lanes, hazards, and secrets to uncover, however, rather than have a set number of balls on each run, players instead have a health bar that depletes every time a zombie makes its way past the flippers at the bottom of the screen.

Adding a further twist to proceedings, are the rogue-lite mechanics. Players are tasked with making their way across a world map, which is slowly being engulfed by a zombie plague, with the aim being to make your way through four worlds in a quest to rescue the princess of the troubled lands. If the plague catches up with you and you don’t move across the map quickly enough, it’s game over, and you need to start a new run from scratch.

Initially, this race against the plague creates a nice tension. Not only is the map dotted with various traditional pinball encounters along the critical path to the world boss, but it also contains detours, which, if chosen, can result in your chosen hero gaining new abilities, or the opportunity to strengthen your heroes core stats. Campfires can be visited to increase your attack damage and health pool, treasure chests can be sought out in the hopes of gaining new abilities, and random world events can be engaged with, such as choosing whether to help out a village in distress in return for a power-up. Procrastinate for long enough, however, and that plague will soon bring an end to your run, so you initially feel like your choices carry weight and consequence. 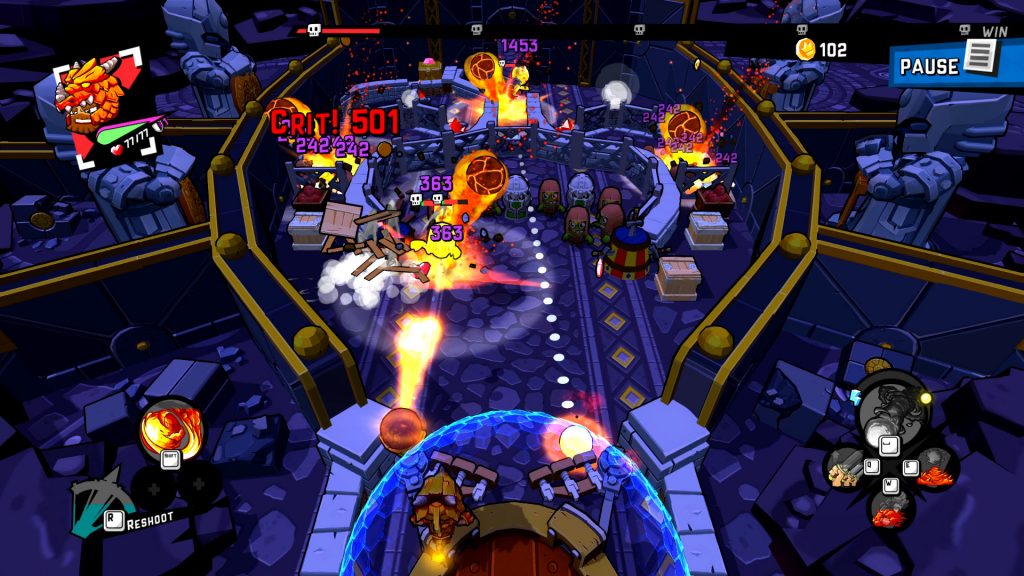 I say initially, largely because after a couple of hours with Zombie Rollerz: Pinball Heroes, it becomes clear that it doesn’t take much to make yourself powerful enough to the point where the difficulty curve becomes non-existent.

After failing on my first run as I got to grips with the mechanics, I breezed through my second run. And my third. And my fourth. Heroes in Zombie Rollerz: Pinball Heroes are capable of becoming hugely overpowered, each coming with an ultimate ability, an attack ability, and a support ability. These unique abilities can then be supplemented further with generic abilities acquired through exploring the map.

Using the only hero unlocked at the outset, the delightfully named “Burnjamin,” who, naturally, specializes in fire attacks, I quickly realized that if I chose to increase the damage output of his AoE attack that calls burning meteors onto the map, I could clear maps and entire waves of zombies with little to no problem. Then, it was just a matter of using my pinball, which also done burn damage of its own, to build up enough energy to unleash the devastating special again. The issue is, it only takes a few seconds of doing damage to build up the resource needed to use the special, which removes any requirement to think tactically as to when to deploy your strongest moves.

Add onto that, the other arsenal I had built up, such as a move that let me cover the ground in poisonous vines, and it all added up to an experience that felt trivial by the time I was halfway through the second world on my first successful run. I was able to stop going out of my way for power-ups and could just progress through the critical path towards the boss of each world. This initial run also wasn’t a case of pure RNG being in my favor. I was able to replicate this extreme lack of balance on subsequent runs, not necessarily with the same abilities, but with the world still allowing me to completely overpower at least one DPS skill to the point where the game became a mindless exercise in repetition.

It’s not all bad, though. The boss fights do require some level of engagement beyond spamming your specials relentlessly. I’ve fought a ninja cat who can create duplicate decoys that do devastating damage unless you find and knock out the real villain before they assault your table. My personal favorite was a shield-toting knight, who would sling the shield across the map, Captain America style, that could then be returned by my flippers and cause devastating damage. It’s during these moments that the promise of Zombie Rollerz: Pinball Heroes shows itself, as you can’t be as liberal with special attacks, and usually have to deal with more complex mechanics that the general trash mobs rarely present.

The maps themselves are also fairly well designed, usually containing various environmental hazards which can be triggered, such as flame turrets, water canons, and crates of dynamite. There is also a treasure room that can usually be accessed once per map, should you be able to navigate the various lanes and obstacles which block the way to the entrance.

Again though, the lack of difficulty almost entirely negates the need to engage with these mechanics, meaning they begin to feel like pointless distractions rather than opportunities to gain a much-needed advantage. 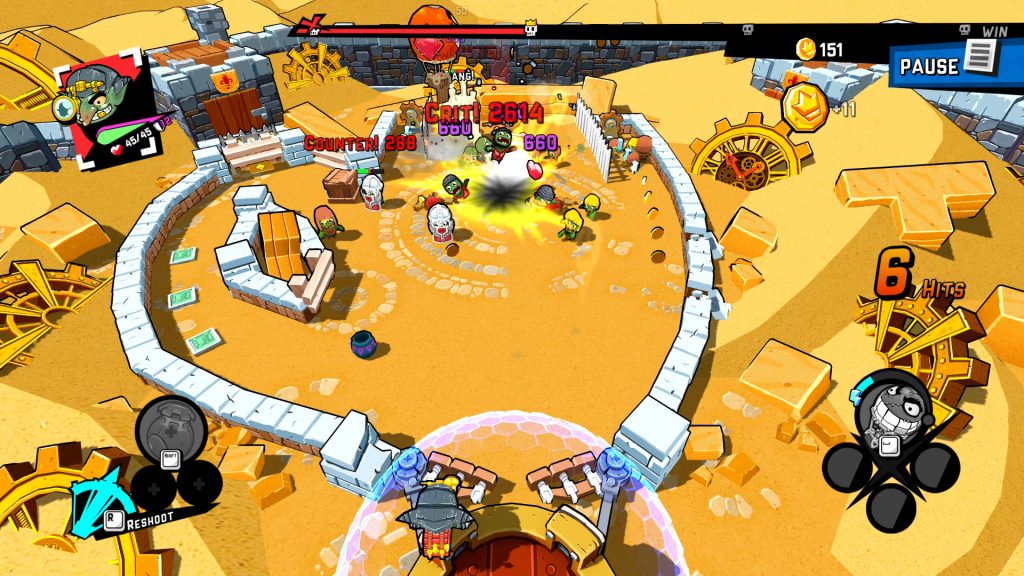 I might forgive the lack of difficulty if the actual pinball itself felt fun to play. Unfortunately, Zombie Rollerz: Pinball Heroes has physics that often feels nothing short of awful. Flippers fail to feel responsive, and the ball itself moves with a stickiness that never feels natural. The ball tends to lurch across the screen, with a real lack of momentum, and when bouncing off the various obstacles, it tends to move at a snail’s pace rather than rebound with any sort of pace.

The issues with the physics are only exacerbated further by the awful framerate, which often chugs with even a modest number of enemies on screen. Trigger your abilities and set off a few environmental hazards in addition to that, and the game resembles a slide show at times. It’s hard to put such shoddy performance down to anything other than the developers not taking the time to optimize properly, given the basic Saturday morning cartoon art style, which really shouldn’t have any trouble in running on the Switch.

To be blunt, when you take the lack of balance into account along with the awful performance, it’s hard to see Zombie Rollerz: Pinball Heroes as anything more than a cynical port that was thrown onto the eShop with minimal effort.

Zombie Rollerz: Pinball Heroes is not a game I can really recommend. Whether you’re a fan of rogue-lites or pinball games, there are numerous options out there that will provide vastly better experiences for your money. Whilst it does have an admittedly interesting concept, a complete lack of balance and poor optimization completely squanders any potential this unique hook might hold.