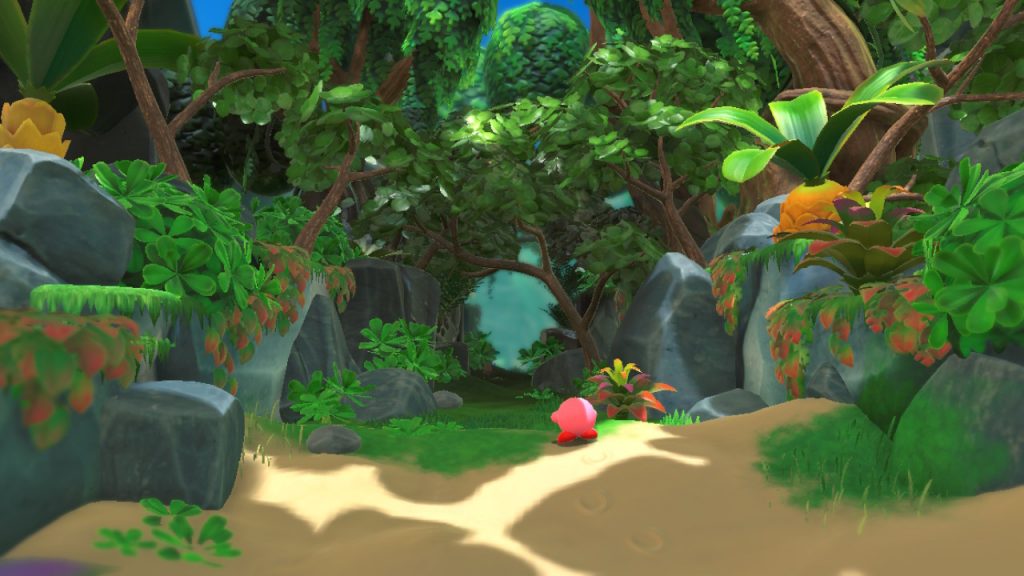 These days, I see a lot of the industry shifting focus towards producing more hardcore games. And that’s fine, sometimes those are absolutely amazing. But other times, I’m thankful for series like Kirby. After all, I grew up with the pink puff ball, and somehow that unique Kirby charm has gone untarnished these many years. But I was very curious if that Kirby sheen would remain in the latest 3D adventure, Kirby and the Forgotten Land. After playing through the Kirby and the Forgotten Land demo, I’m confident this will be another great game for fans of the classic series. 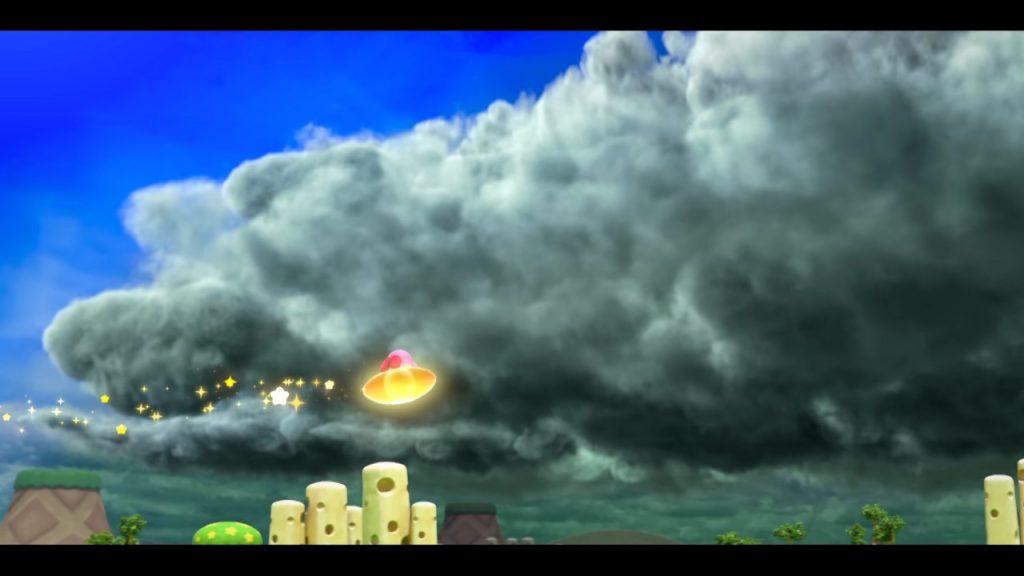 The demo starts by setting the stage. Some mysterious storm clouds darken the horizon. When Kirby goes to investigate, he finds a star-shaped hole in the clouds. It begins drawing in everything nearby, including several Waddle Dees. Unfortunately Kirby gets a wee bit too close on his Warp Star, and gets dragged in himself. He floats helplessly through a strange portal, where reality seems in a constant state of flux. When he awakens, he’s on an idyllic beach. What’s a hero to do other than investigate this strange new world? 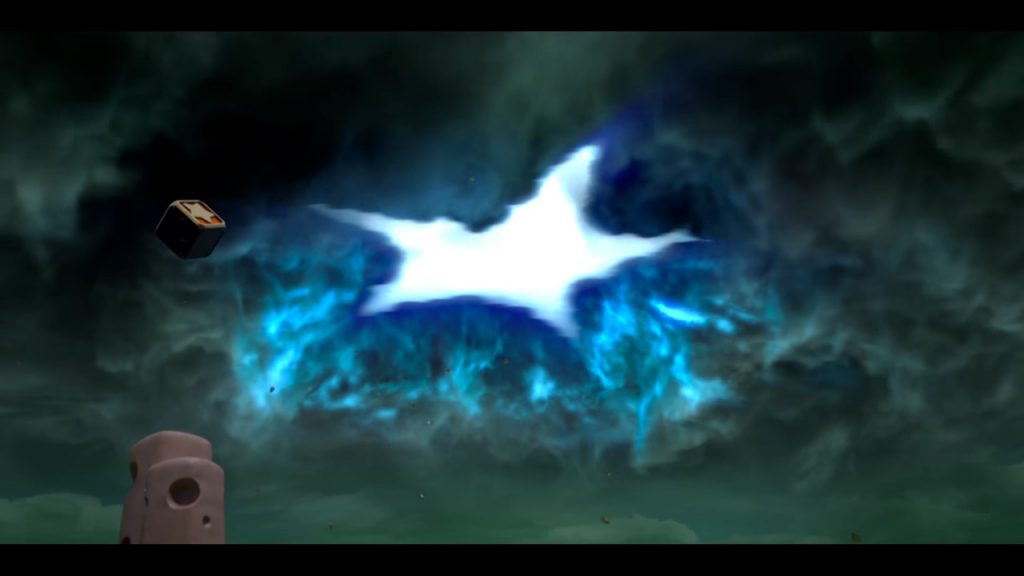 While Kirby and the Forgotten Land is set in a totally three dimensional space, it still feels remarkably Kirby. You run around, float, gobble up foes and spit them out. To keep the puff ball from being totally overpowered, there’s a height limit to how high he can float. So you can’t just fly over entire levels. That said, you can get much farther much faster using new Mouthful Mode transformations. 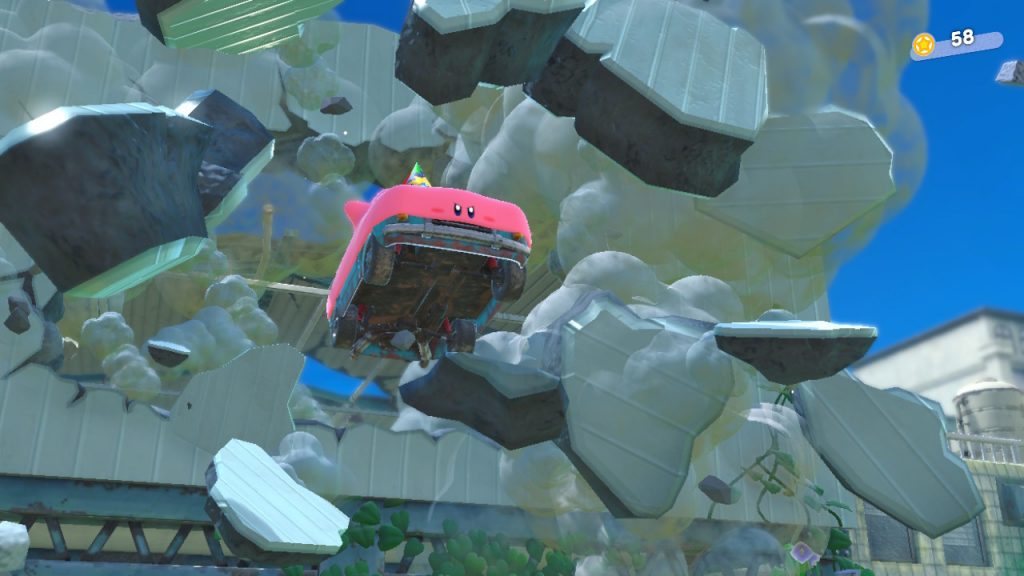 In a weird way, the Mouthful Mode mechanic almost reminds me of Chibi-Robo. In those games, there was a discordant realism to some objects that made them remarkably weird. In Kirby and the Forgotten Land, you give Kirby unusual powers by inhaling (or trying to inhale) those otherwise ordinary objects. We all saw Kirby as a pink car, and it’s glorious driving around and crashing through walls. But the transformation I most enjoyed in the Kirby and the Forgotten Land demo is the traffic cone. 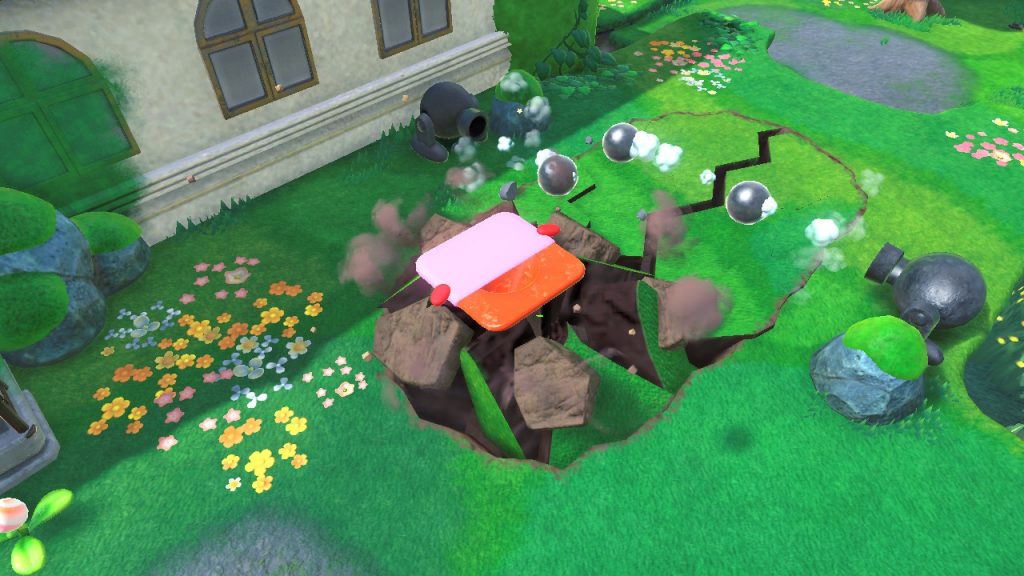 Using it, Kirby can leap high into the air, flip, and slam down pointy end first. Doing so lets him shatter visibly damaged parts of the ground, and even some foes. There’s a noteworthy turtle species that traded shells for blocks of concrete. But that’s no match for the power of Kirby’s traffic cone! Okay, it makes no sense, but it’s still a tremendous amount of fun. 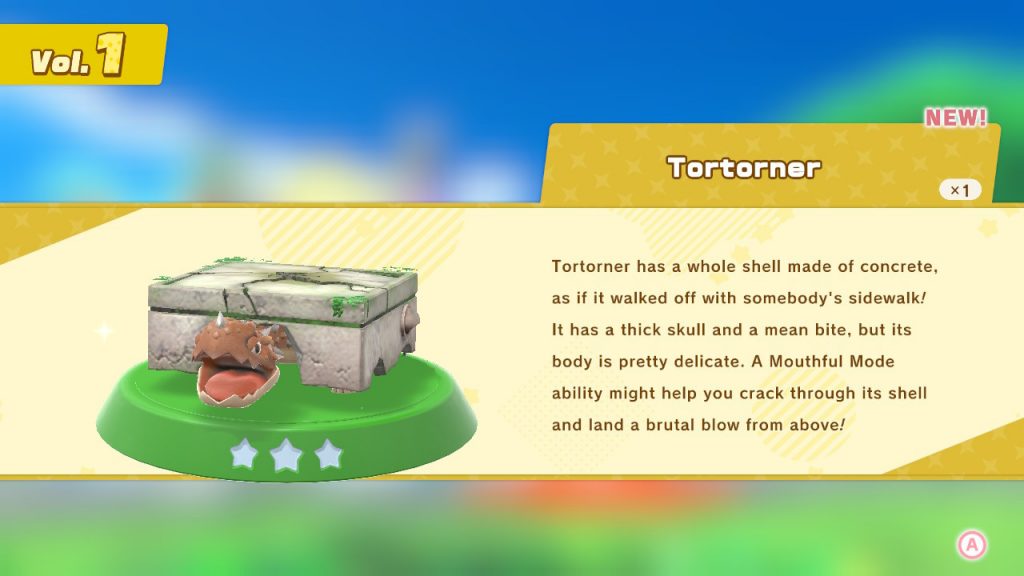 There’s three stages in the demo. The intro stage that teaches you the ropes, after which you meet new friend Elfilin (or secret enemy, if he’s anything like Magolor). After the intro, there’s a full fledged stage with optional missions and a boss fight against the hulking simian, Gorimondo. What’s fun is that completing missions rewards Kirby with all sorts of goodies. You’ll also find dioramas as you search through stages, which reveal a bit of lore. While I was able to beat all three stages in about an hour, there is incentive to play through again. Doing so lets you test out some of Kirby’s evolved abilities! 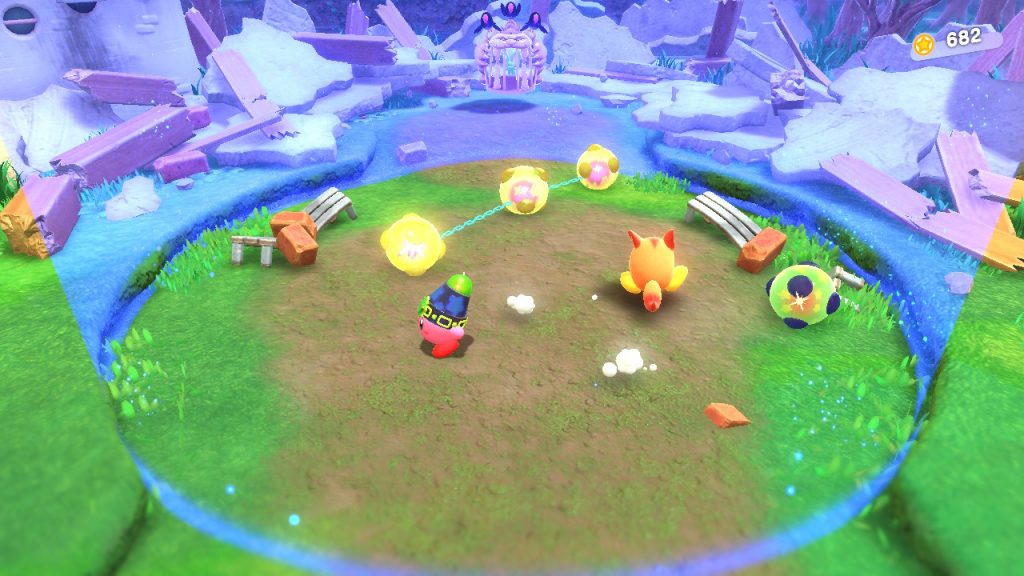 Now, the evolved abilities mechanic is the one that has me most excited about Forgotten Land. You apparently evolve them at Waddle Dee Town. In the demo, you just get to play through the stages again with evolved powers after beating it once, though the game never told me that. I just stumbled onto it earlier today. As an example of how they differ, the Bomb turns into a chain bomb, and the cutter turns into a rapid-fire chakram. The Sword gives you some invincibility before attacks, and the evolved Ice lets Kirby make literal snowmen to hurl at foes. 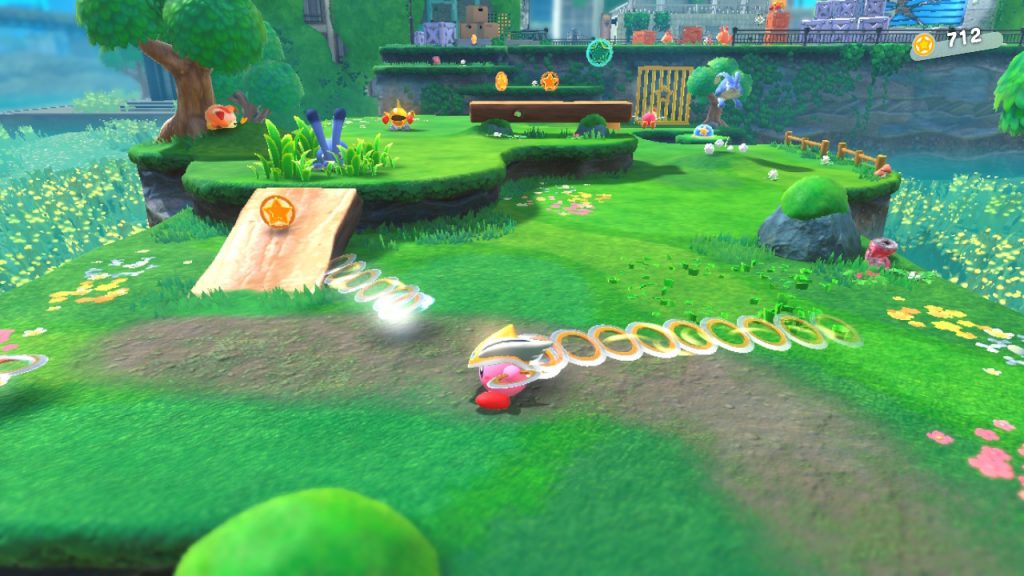 The big boss fight was against a giant mohawked gorilla named Gorimondo, and he had style to spare. He hurled giant rocks at Kirby, tried to grab him repeatedly, and even spun around with both fists flying. I tried playing him the first time without any abilities, and found a reasonable challenge. It was actually much harder using the evolved Ice to hurl snowmen at the dirty ape, but I enjoyed the challenge. I’m really eager to see what the other boss fights are later this month. 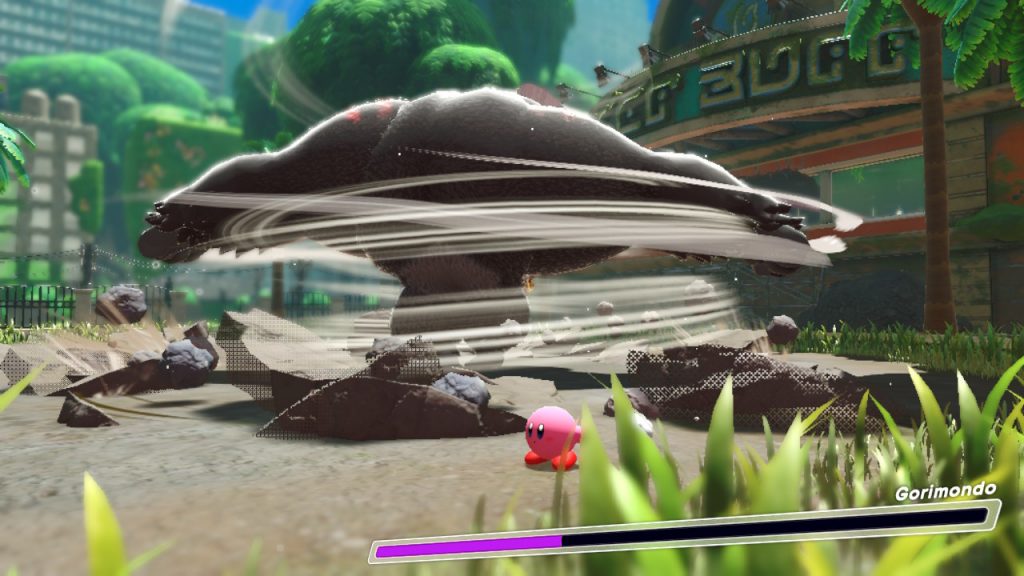 So far, I think the Kirby and the Forgotten Land demo shows a ton of promise for the final game. And as a fan of series, it looks to keep the same spirit in a new form. That means tons of unlockables, great artwork and fun bosses. I’m not sure why the Beast Pack is so dead set against Kirby, but I’m looking forward to finding out. 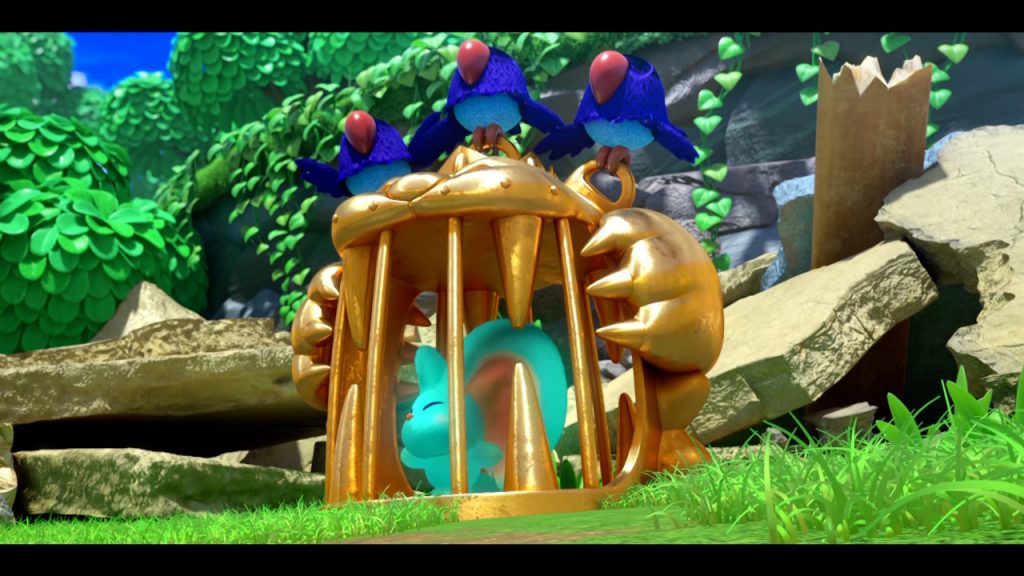 If you haven’t played the demo yet, I’d check it out. It won’t take much time (regardless of what difficulty you select) and should help you decide if the latest Kirby adventure is for you. And stay tuned for my upcoming review of Kirby and the Forgotten Land after it releases later this month! 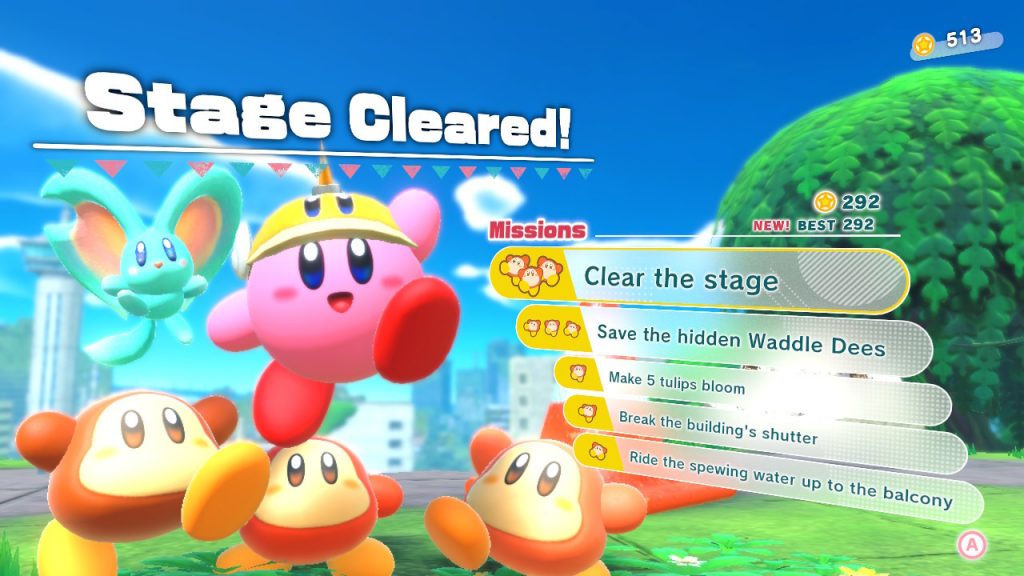 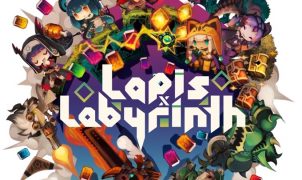