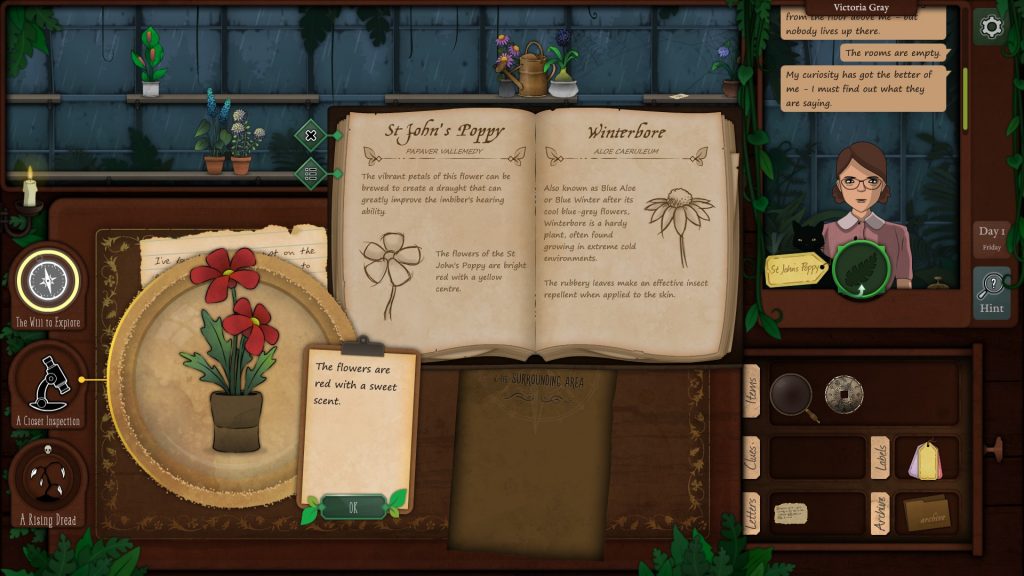 My deepest sympathies — I hate to be the bearer of bad news, but your uncle has passed away. I offer you my condolences during this trying time; I also offer you the information surrounding his now vacant nursery, Strange Horticulture. You see, it’s been left unattended in the wake of his passing, and as you’re next of kin, well… the store is yours. Don’t worry about a green thumb (or lack thereof), as you’ll find everything you need to run the shop at the counter — including the lovely black cat, Hellebore. Enjoy your new career as an occult botanist!

So begins Strange Horticulture, a mystery puzzle game that mixes a little bit of Papers, Please, Potion Craft, Astrologaster, and something else entirely new. Developed by Bad Viking and published by Iceberg Interactive, Strange Horticulture has already received the highly coveted Overwhelmingly Positive rating on Steam within 3 weeks of its launch date of January 21, 2022. With 8 – 10 hours of surprisingly addicting plant finding, collecting, and cataloging gameplay yielding one of at least eight possible endings, it’s safe to say that Strange Horticulture deserves all the praise it’s been getting. 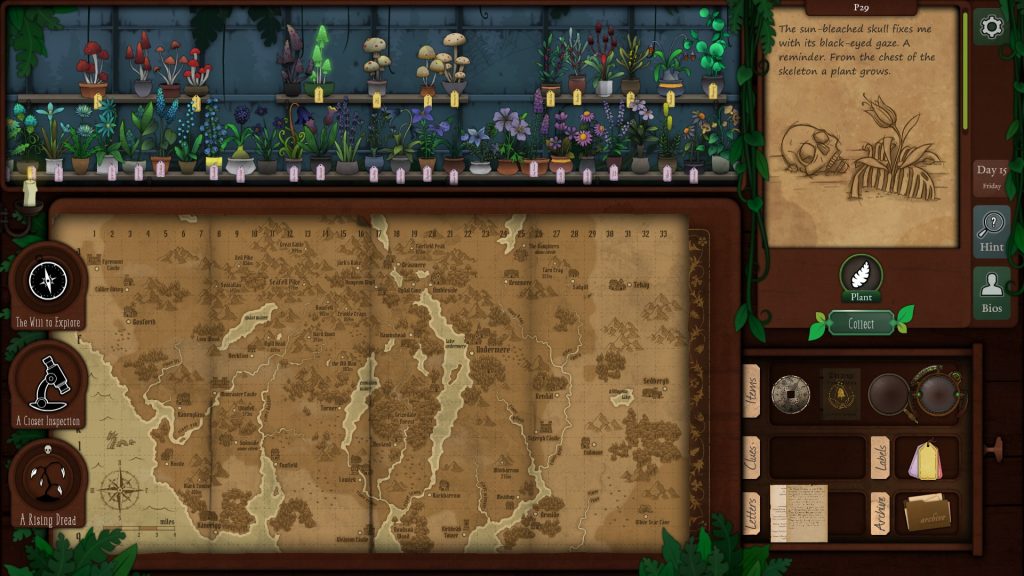 As previously mentioned, players take on the role of a newly minted and utterly inexperienced plant shop owner. Luckily, most of the patrons can name the plants they need (or at least describe them extremely well) and a reference book in your possession holds the knowledge to pinpoint exact demands. Other tools in your nursery arsenal are labels, which allow you to make note of a plant’s name before putting it back on the shelf, a map and magnifying glass, which come in handy when letters arrive to inform you of interesting plant locations, a microscope to take a closer look at plant characteristics, and other items which yield their usefulness as time marches on. Running Uncle’s shop isn’t so hard after all!

From the beginning, it’s easy to see exactly why the shop is named Strange Horticulture. Although a fair share of patrons come in for standard fare for relieving headaches or curing rashes, there are a handful of curious customers who are clearly dealing with magicks, mysteries, and even murders pertaining to the occult. At first, they may ask for flowers that clarify strange visions they’ve been having or a plant that provides mental protection against mystical forces residing in realms beyond our own. Over time, however, it becomes alarmingly evident that the world as we know it stands at the precipice of irrevocable change, an uncontrollably dark and powerful being fought over by a select few that understand the nature of the occult… and your shop is at the center of it all. 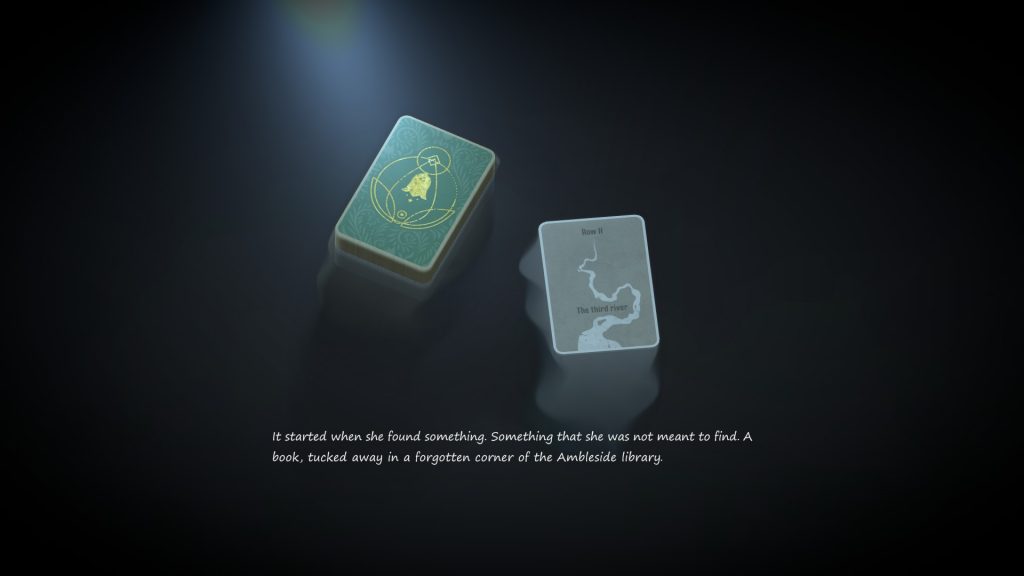 Mechanically speaking, Strange Horticulture plays most similarly to Papers, Please in that you stand at the ready for any patrons that browse your wares and, using the referential material on your desk, solve the puzzle of your customer’s query. Someone asking for a red plant that brings luck means you’ll flip through your book to narrow down exactly which plant it is using the book’s written and illustrated descriptions. Some are easier to tease out, like when the book mentions the exact number of petals on a flower or makes note of a milky substance oozing from a mushroom cap; others, however, are far more cryptic and may even require adventuring outside to find a new plant altogether.

It’s this adventuring side to Strange Horticulture that I looked the most forward to, as the puzzles not only increased in their difficulty but in their enjoyment. You might receive a letter one morning beckoning you to visit a particular city or castle marked clearly on the map, but you’re just as likely to obtain a seemingly incomprehensible short note (or even a blank one) that will require a tool to properly decipher. These puzzles are by far some of the most rewarding in the entire game, their complexity making you feel like a veritable genius for solving them and bringing home a new plant as a reward. 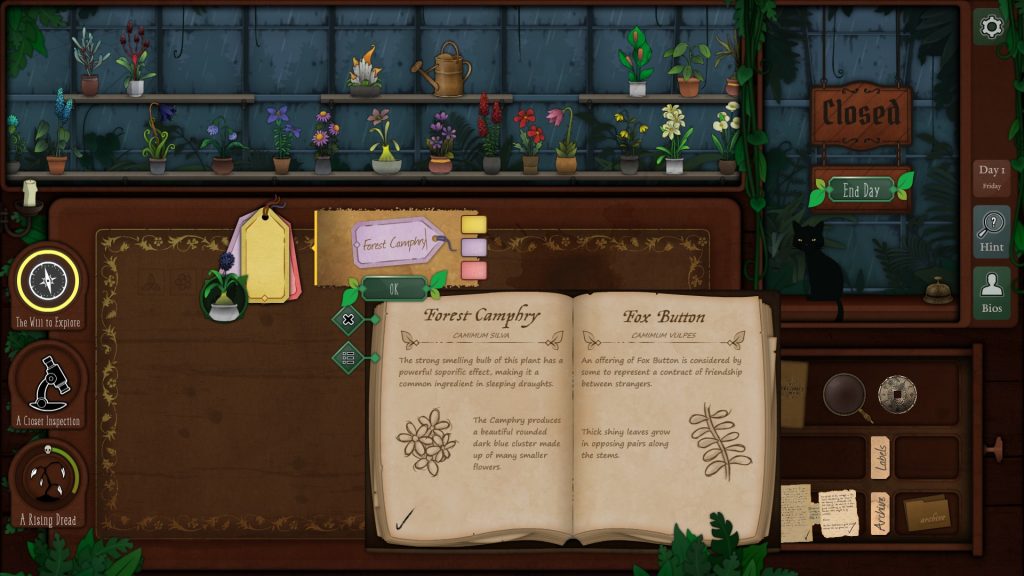 I think the best part about Strange Horticulture is just how much it evolves with the player and strives to consider the small stuff. Tiny text a problem? You can use the scroll wheel to zoom in. Just identified a plant? Use the color coded labels to remember its name, then put it on one of the many shelves in the order you desire (I ordered mine by color, placing fungus and non-flowering plants on their own shelves separate from flowers). Suddenly notice some weird inscriptions on your desk or come across a plant that rings a bell in tool directions? With perfect timing, those items come into play as soon as they are perceived, making the game feel more than just coincidental, but actually… well, magic!

I don’t really have many complaints for the game — I know it’s early in the year, but so far Strange Horticulture is the bar by which all GOTY 2022 games shall henceforth be judged — but I admit I did have trouble keeping up with the story in terms of which characters were aligned to what faction, the importance of keeping them alive (or the opposite), and picking up on pivotal cues that would critically affect the narrative. Strange Horticulture requires a lot of parsing through texts, looking through a microscope, and then tossing a plant at people and hoping it’s the right one that it’s hard to then immediately shift gears and take in story information. I absolutely adore the gameplay of Strange Horticulture and the deep, mysterious world it resides in, but to fully understand the story, expect to play the game a second (or third) time (as if that’s a bad thing!).

Strange Horticulture is the botany game of my dreams. It has that research-minded gameplay I’ve been seeking for years. And while its story has a lot of moving parts that makes it hard to shift gears between listening carefully to a few patrons and peeking through a microscope, poring over books, and braving the elements to find exotic flora, it pulls you in with its deeply intriguing mystery nonetheless. I can’t recommend Strange Horticulture enough, and for a multitude of different reasons that all boil down to a unique blend of elements entrenched in an unsettling mystique, I declare this to be the bar by which all other games released in 2022 shall be measured.

Full disclosure: This review is based on a copy of Strange Horticulture provided by the developer. 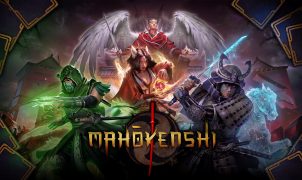 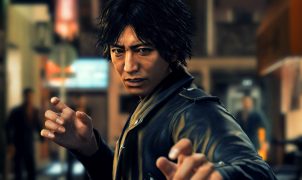