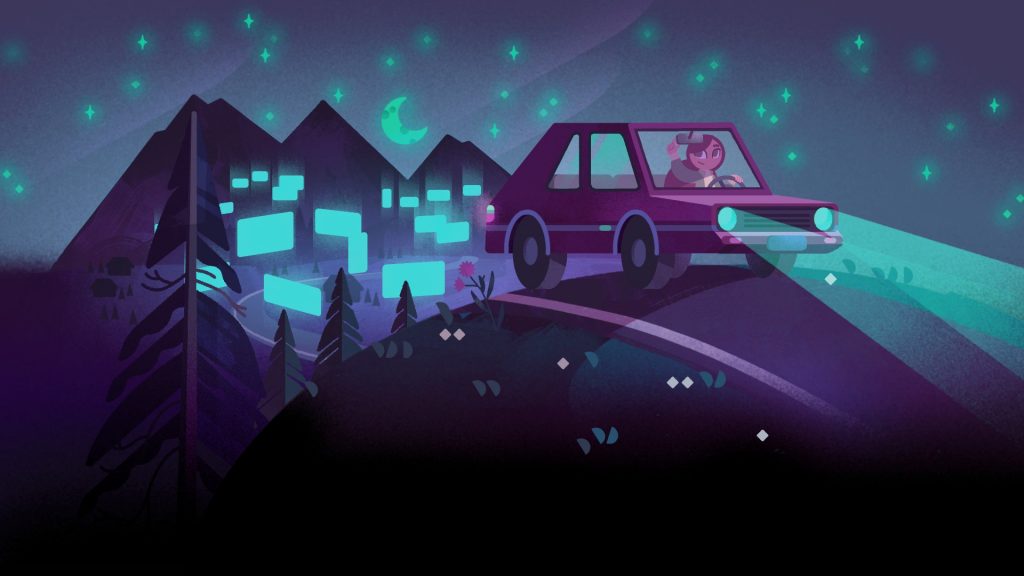 You know the saying about boiling frogs in water? If you boil a pot of water and then toss a frog in there, it’ll immediately jump out due to the extreme heat; however, if you put a frog in room temperature water and slowly crank up the heat, it’ll boil to death. I know that’s a bit graphic (I’m happy to report no frogs were harmed in the making of this opening paragraph), but I feel it accurately sums up our adoption of social media and screens into our lives — gradually, but eventually all-encompassing. Gone are the days where we spent an hour or so online; now, it seems most of our connections are maintained over screens, our virtual identities turned into a veritable brand that takes away time from our analog lives.

It’s this concept Land of Screens unpacks in it’s short but sweet narrative adventure. A point and click social commentary that is simultaneously on the nose while still leaving food for thought, Land of Screens will delight fans of wholesome titles for the same price as a cup of fancy coffee. Developed by Serenity Forge (Doki Doki Literature Club Plus!, Death’s Gambit) and published by Way Down Deep (Half Past Fate, Some Distant Memory), Land of Screens is a 1 – 2 hour experience at most, but it’ll linger with you for far longer if you let it. 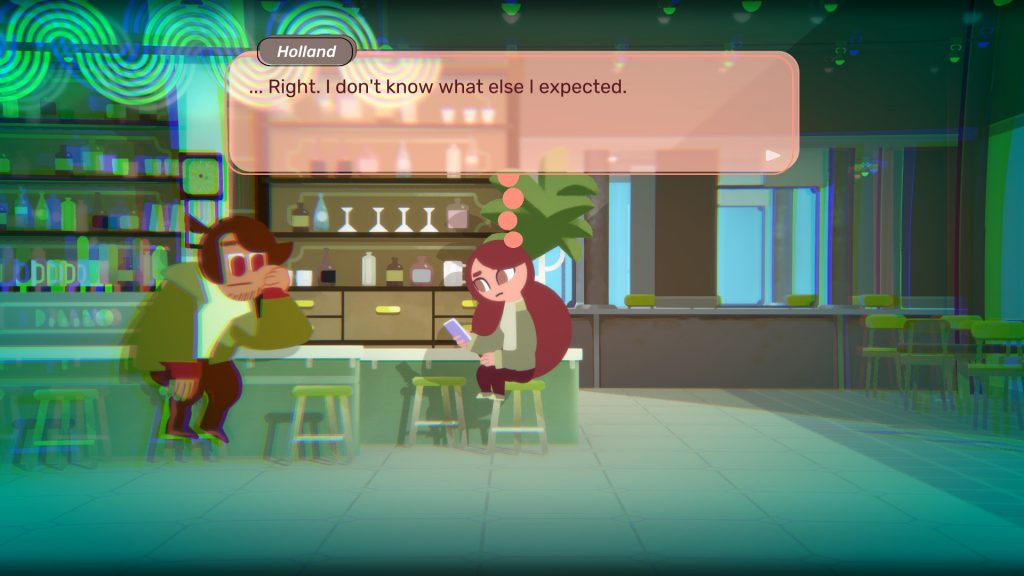 Land of Screens has players taking on the role of Holland, a young professional who has just broken up with her boyfriend of five years, Brian. As she paces around the room contemplating the best way to break the news on social media, a thought pops into her head: why not call her high school best friend, Cody, and cry on their shoulder? Cody eagerly answers and suggests an impromptu party to help Holland forget her woes, which Holland readily agrees to — after all, she’s already packing for a weeklong trip away to attend a conference and family reunion, so why not show up to a little shindig beforehand?

Unfortunately, Holland forgets her charger at home — just in time to notice that Brian has already announced their breakup on his social media pages. Fantastic! Now Holland can’t monitor all the things people are saying about her; not only that, everyone at Cody’s house seems to have their faces buried into their phones while hers has kicked the bucket. How is Holland going to handle a week of this? 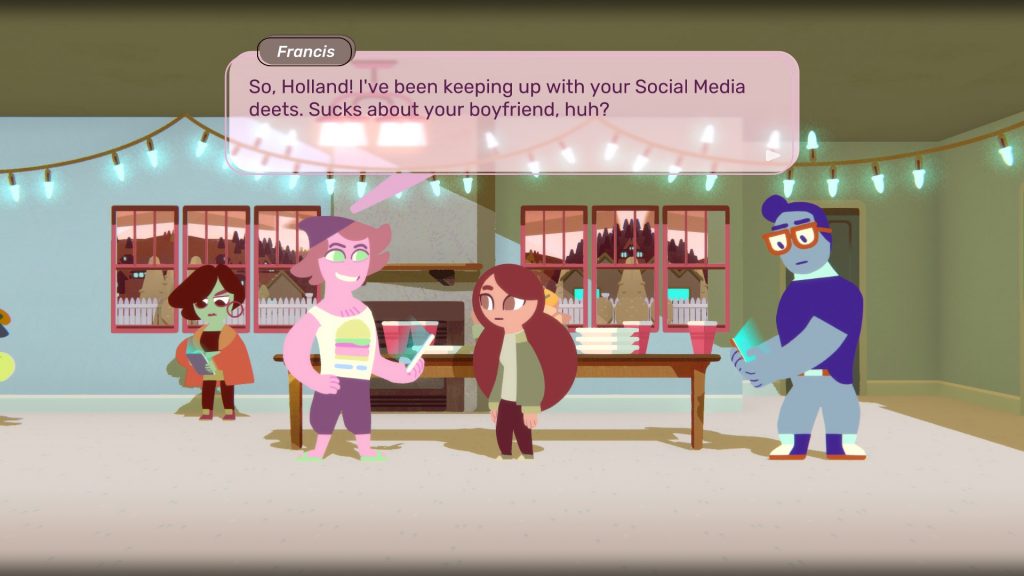 The story in Land of Screens is very short, so I don’t want to go much further to prevent any spoilers, but I will say that a common theme in this game is the idea of practicing social media distancing. As Holland goes about her phone-free week, she notices just how much people are addicted to their devices to the point where they’re not enjoying the moment. Normally, this is the kind of narrative that makes me roll my eyes a little bit because it’s often a certain age group leveling this “advice” on another without realizing how hypocritical they’re being, but if I’m being honest, Land of Screens handled it correctly.

For example, pretty much everyone except for Holland and a really small handful of others have their phones surgically attached to their hands, from baby boomers to baby cousins. It’s not just millenials that are being accused of this anti-social social behavior, it’s her parents and grandparents in addition to her peers and younger. This distinction alone makes the message less antagonistic and annoying, but the game takes it further by addressing actual reasons *why* people might be terminally online — most of it being miscommunication. Phones may alleviate the awkwardness some people feel in social situations, but they can also act as a barrier that prevents people from approaching others. Someone might see that everyone around them is occupied on their devices, so they may feel the need to whip theirs out as well, feeding into a never-ending cycle of “I guess I’ll stay on my phone since everyone else is busy.” This conversation surrounding phone use may not be new, but in Land of Screens, it’s at least fair and even nuanced. 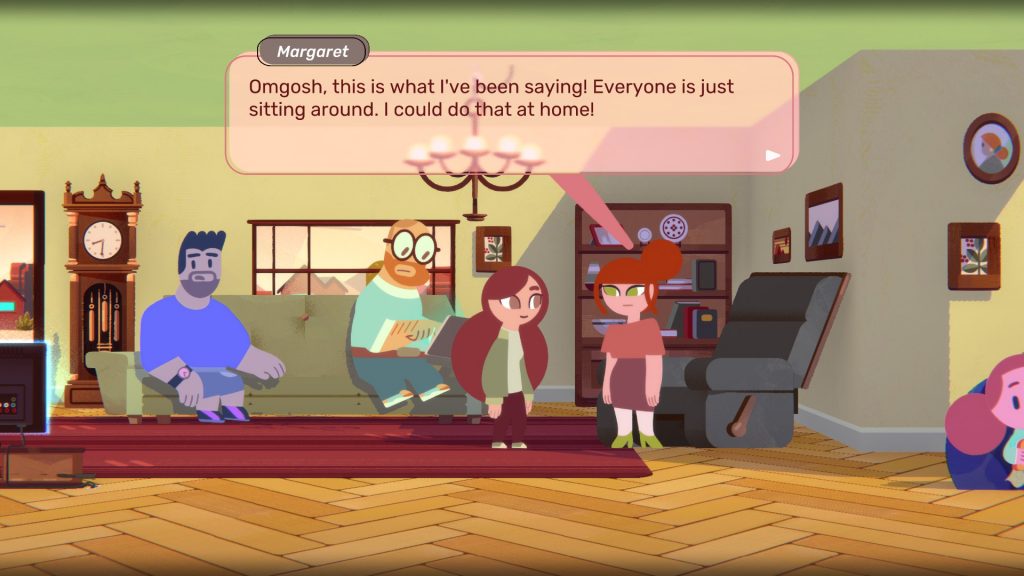 If I had one complaint, it’s that I felt like clicking on the exact person or item that I needed was oddly difficult. For some reason, I’d click on a person, and Holland would walk behind them or off in a completely different direction. Additionally, the gameplay is extremely shallow, the focus instead being entirely on the storyline and message. While the latter shouldn’t be an issue as long as you know what you’re getting into, the former was at least noticeable. With that being said, I genuinely felt like that was the only issue, so if you’re big into what are essentially walking visual novels, Land of Screens will definitely be up your alley.

Above all, what I liked best about Land of Screens is that it made me consider my own social media usage while playing. During this pandemic, I’ve been completely disconnected from my family, our only ability to talk being over the phone. And while I’d say that’s a more positive use of my time and technology, I admit I spend more time on Reddit and Twitter than I should. I often think back fondly to the days before smart phones when I would curl up on the couch with a book and spend time with my cat and wonder why it’s so hard to make the conscious decision to do more of that. Like the frog in water, I guess I never realized my slowly increasing addiction to social media; perhaps Holland’s journey will serve as a good wakeup call to better utilize my time.

Land of Screens may not be the longest game you’ll ever play, but it’s one that, if you let it, has the potential to have the longest impact. Every level has something that will resonate with someone, driving home the point that maybe, just maybe, being terminally online isn’t the way to live life. With cute visuals, soothing audio, casual gameplay, and a tiny pricetag, Land of Screens takes a tired conversation that is oft ignored and repackages it to offer an obvious but fair lesson. Skip on the screen time, but don’t skip on Land of Screens.

Editor’s note: This review is based on a retail copy of Land of Screens provided by the publisher.

A nice helping of co-op gameplay, served with a side of laughs Traditional couch multiplayer games have become a bit dated in our current year but, as I have…