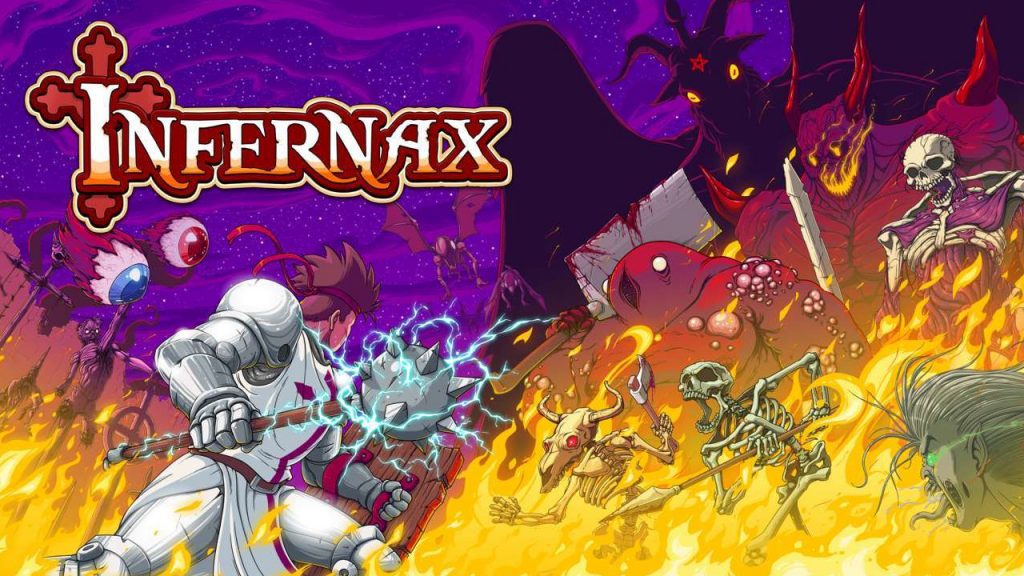 It’s kind of fitting that Infernax is slated to come out on Valentine’s Day, since I’ve been crushing on it pretty hard. Which may seem odd since I wasn’t a longtime fan of the game that inspired it, the contentious classic Castlevania II: Simon’s Quest. I actually first played through Simon’s Quest a few years back on my 3DS, and despite all the weirdness that hasn’t aged particularly well, I still found myself captivated by the adventure. So when the premise of Inferax is that it’s a modern game that features elements of Simon’s Quest and Zelda II, but along with convenient design elements and unexpected twists, I was hopeful it would be worth my time. And after rolling credits in one of the several possible endings, I can confirm Infernax is absolutely a game that fans of retro and platforming will adore. Keep reading this Infernax review to see why it’s already one of my favorite titles of 2022.

From Bloody Campaign to Demonic Invasion 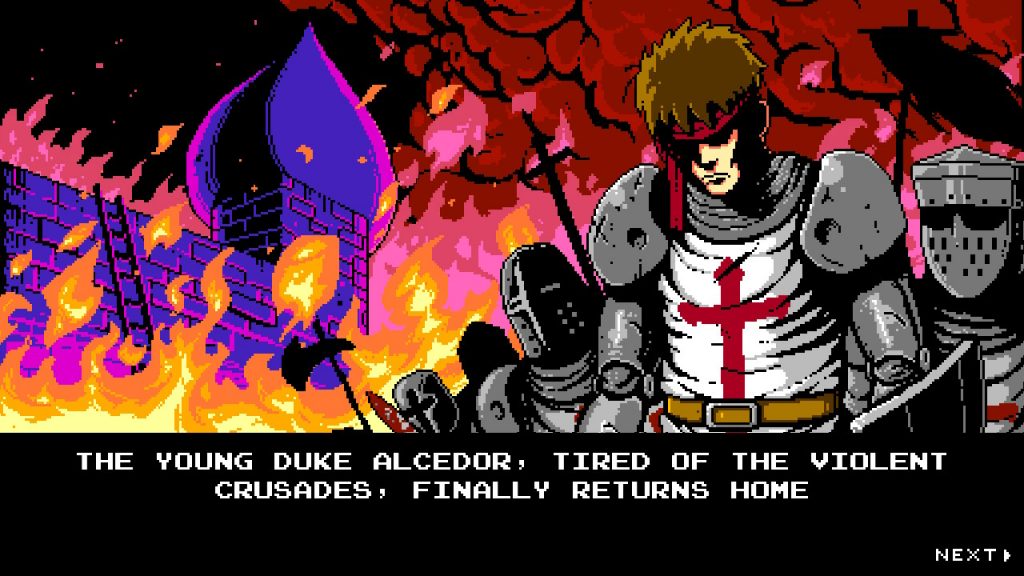 Infernax starts when Duke Alcedor returns home from a bloody campaign abroad. All he wants is to rest and recover, but fate has other plans. A power-hungry group of cultists has acquired a magical tome, and in opening it, unleashed nightmarish horrors across the land. These fiends range from roving zombies to fierce werewolves and all manner of detestable demonic hordes. Alcedor will have to use his mace, shield, and unrelenting resolve to face them, and hopefully save the land in the process. 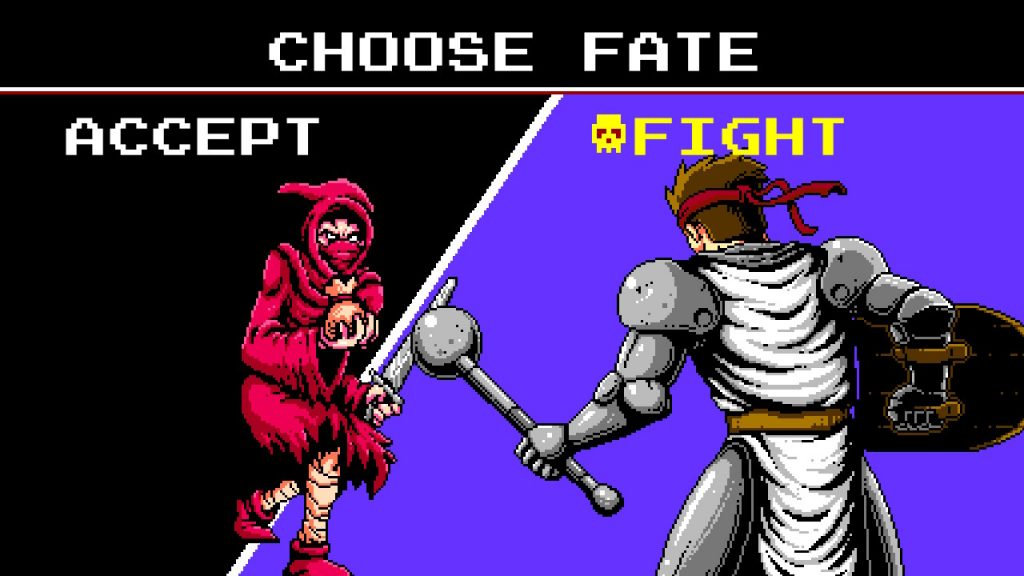 One of the most fascinating elements of Infernax is its morality system. You’ll be presented with choices at key points in the game, and depending on what you choose, you’ll alter the path Alcedor is on. This will lead to different optional quests and even bosses, and will also contribute to which ending you receive. I generally tried to do the heroic thing in the game, bashing bandits and destroying hideous monsters. But you’re more than welcome to go another way, maybe get some coin for turning a blind eye to mischief. For all my hard work, I managed to defeat the demons, but the cost was high. Which only motivates me that much more to play through the game again and again in my attempts to uncover new paths and hidden secrets. 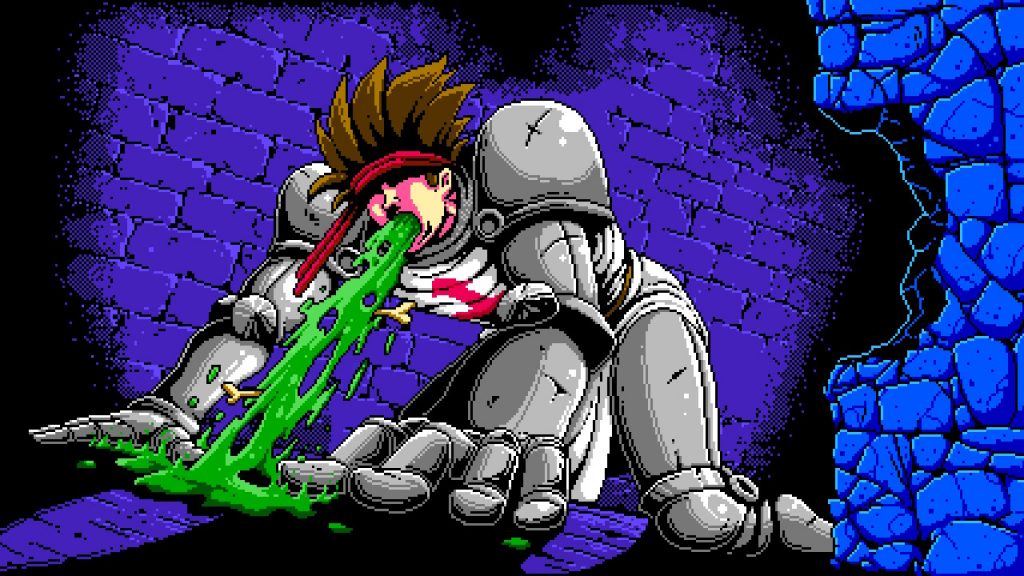 What’s also a pleasant surprise about the game is how self-aware it is. There are humorous nods to Simon’s Quest peppered all throughout. I found one in the very first dungeon, after discovering some well-hidden chicken in a chunk of wall. Alcedor took a bite, only to vomit the rancid poultry all over. It was gross but also hilarious for those that grew up with Castlevania. Of course, that’s not the only such event, but I won’t ruin the others. Just keep your eyes peeled for anything that stands out as familiar or strange, and act accordingly. Oh, and if you were a fan of the day/night cycle in Castlevania II, fret not. It’s used to good effect here as well. 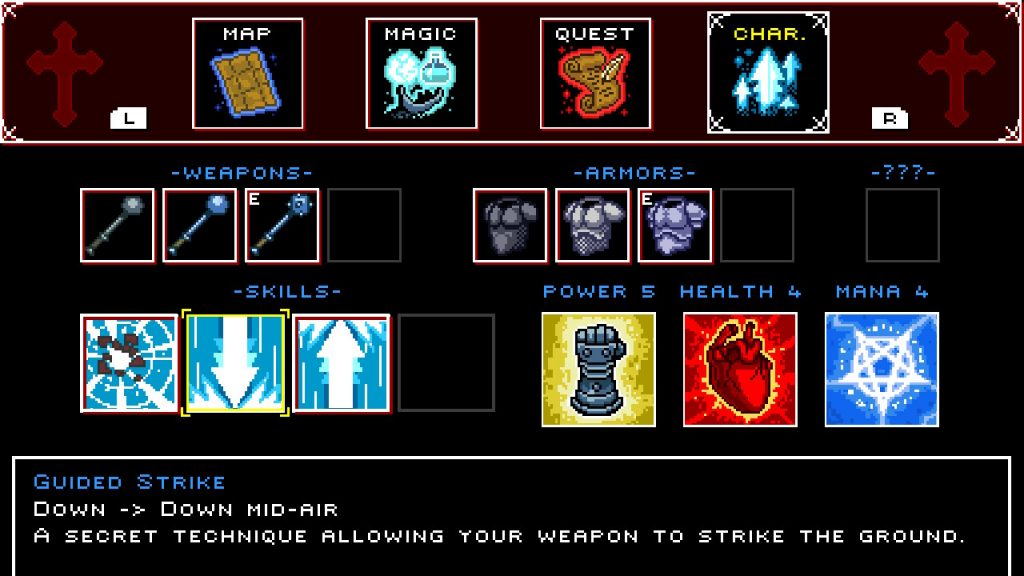 None of what I’ve mentioned so far would matter if Infernax wasn’t fun, but I found it a joy to play, steep challenge and all. Though Alcedor walks about like an ambulatory tank, he’s well equipped to deal with a lot of harm. He can bash foes with his mace, block projectiles with his shield, and imbibe potions to heal or recover his mana. You’ll need that mana to cast powerful spells. There’s a bunch in the game, some well-hidden and some in plain sight. They’ll range from healing to summoning familiars, casting thunderstorms, and even teleporting to the nearest save point. 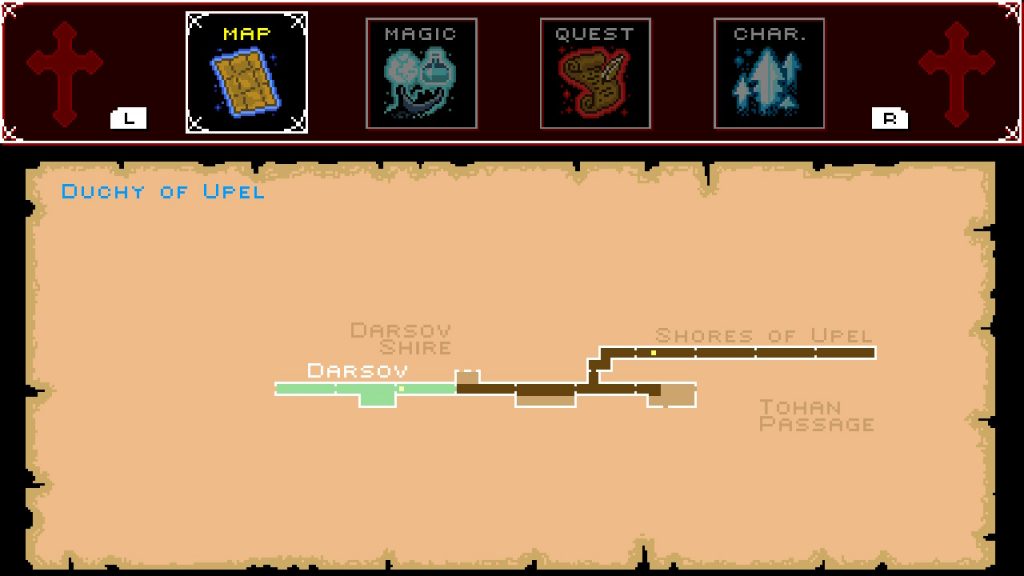 Alcedor also learns a variety of handy skills as he progresses. He can eventually deflect projectiles with well-timed weapon swings, get vertical with uppercuts of his mace, ground pound and dash forwards. Each new skill makes him that much more maneuverable. But you can also boost his stats by upgrading one of three areas at save shrines- Power, Health, or Mana. Each new upgrade will cost more and more experience, finally capping off at 9,999 points. And if that wasn’t enough, you can also find permanent upgrades to your mace and armor, which really go a long way to helping Alcedor survive a bit longer.

Dead But Not Buried 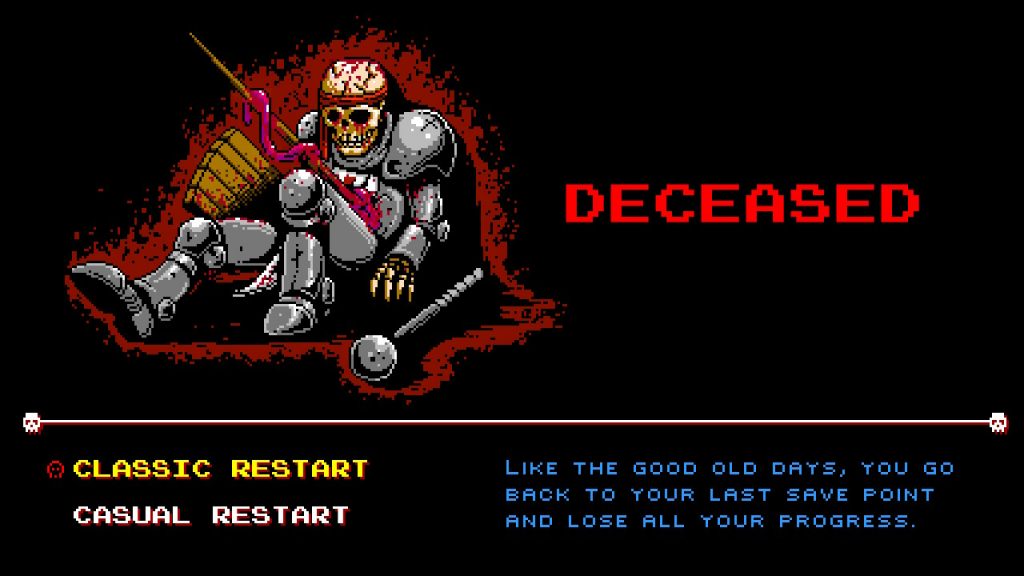 While Alcedor isn’t the most nimble of heroes, I found the controls in Infernax to be tight and responsive, which is good, since even with great controls, you’ll die a LOT. Or at least I did, though I also played the entire game on Classic difficulty, as the developers intended. That difficulty means you’ll encounter fewer save points, lose all your acquired XP and coins when you perish, and the like. I was tempted to change the difficulty to Casual a couple of times, since there’s plenty of ways for Alcedor to die instantly, but relented. I also was tempted to use the built-in cheat codes in one early intense platforming section, but was able to finally make it past without activating features like flight or invincibility. But if you feel overwhelmed, there are many ways to make the experience a bit more forgiving. 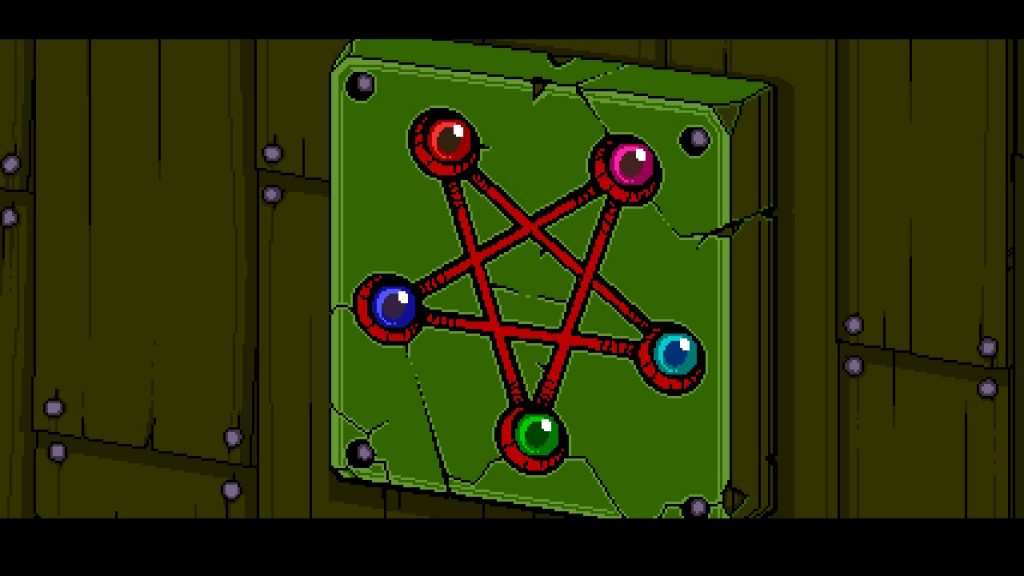 One area the game’s challenge is most visible is in the epic dungeons. They’re full of monstrous foes, locked doors, and traps aplenty. These range from simple arrow traps to spikes and even pits of lava. On Classic, the inside of each dungeon is utterly devoid of a save point. While that was occasionally frustrating, I just backtracked to the outside to use the save points there. Which is a really handy technique, since you don’t want to lose all your progress after finding keys, spells, or new skills. And you’ll need all the help you can get to deal with the game’s epic boss fights. 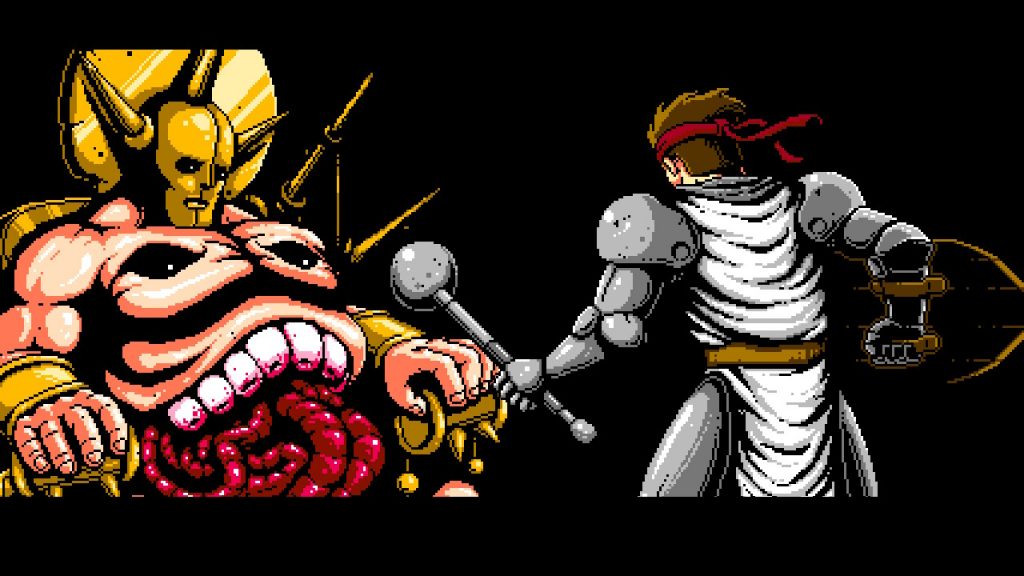 Most of the bosses are twisted Greater Demons, but not all. While each dungeon in the game has a boss fight, you’ll find a few bosses in unexpected places. So make sure to save regularly and prepare for vicious fights against the horrors thirsty for your blood. Because every major foe in the game can utterly devastate you in moments if you’re not careful. You’ll need to pay attention for cues for when an attack is coming, block when possible and attack when it’s safe. The first boss in the game is a hideous mound of flesh and bones that belches fire at you while walking calmly back and forth. They get much more tricky from there. One of my favorite bosses is a water-bound demon that tries to knock you into the water with tentacles, then pops up to try and hit you with fire and laser beams.

Beautiful and Horrible in Equal Measure 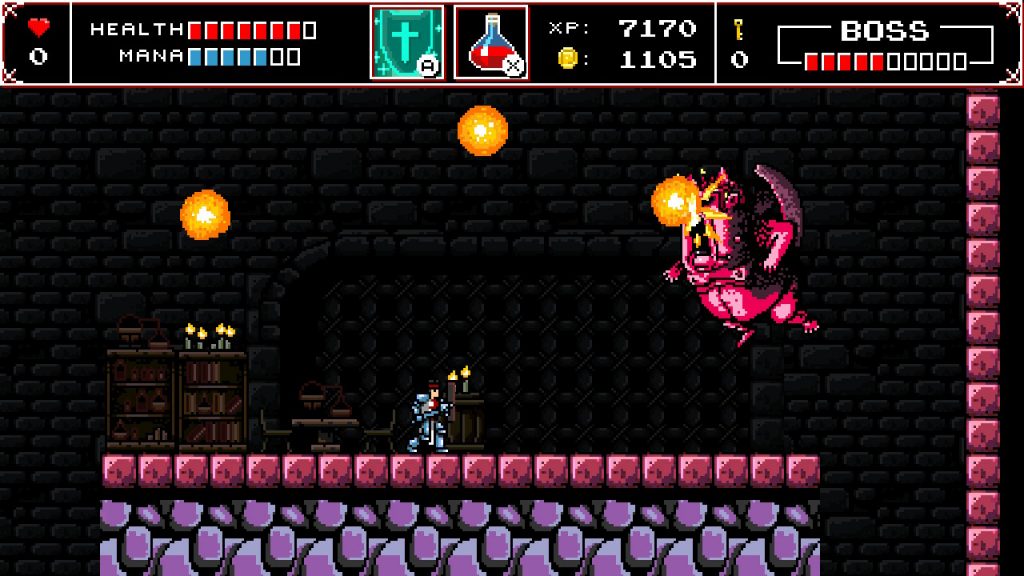 Visually, Infernax is a true love letter to retro games. The pixel art is glorious, and I appreciated the cinematic cut-ins before a boss fight. I also loved the morbid little visual touches, such as how Alcedor gets stained in the blood of his foes, and how the light tapers out the closer you get to boss rooms. And though I don’t enjoy dying in the game, when you do, you’ll be gifted with a red and black execution animation that is a nod to Zelda games of the past. That’s all great, but if possible, the music in the game is even better. It’s catchy and full of rhythmic chiptunes that will get stuck in your head for a long time after you finish the game. It’s also fittingly suspenseful to keep the supernatural elements of the plot front and center. It all comes together to make this a really attractive package.

Only For the Most Stalwart of Heroes 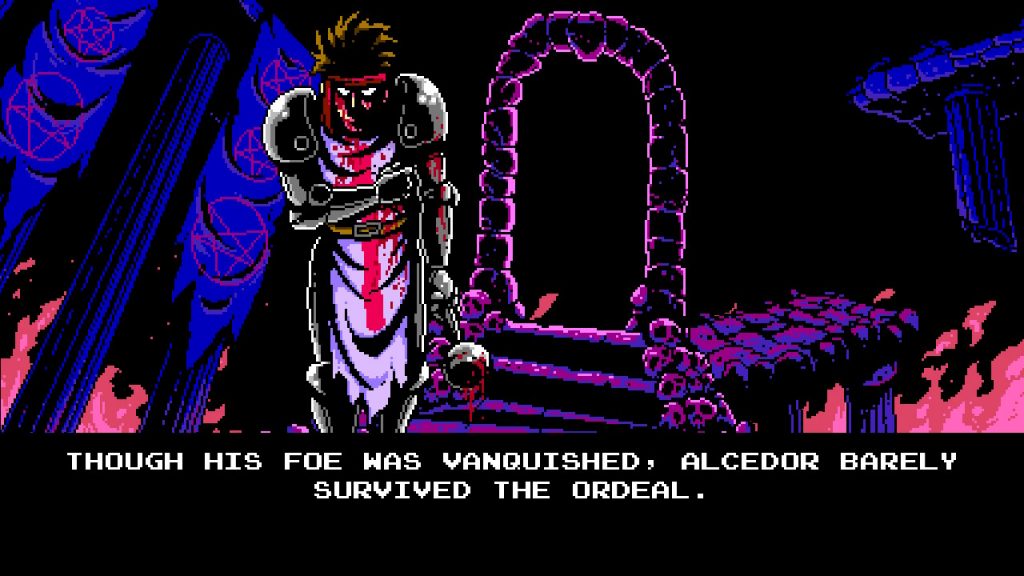 While I really enjoyed Infernax, I’m cognizant that not everyone will enjoy the challenge. Even with the accessibility options, the game can be a lot to handle. The section I mentioned earlier that nearly made me turn on the cheat codes was one rough spot. Another was in a truly frustrating aquatic dungeon. It was full of watery pits that instantly drown Alcedor, mermen that leap out to spit at you, and tons and tons of flying eyeballs. That was easily one of the hardest dungeons in the game, especially since you had to get through most of it without the uppercut skill I mentioned earlier. While all of these do keep the game from a perfect score, it’s still a really close thing.

A New Classic Is Born

I’m incredibly glad I got the opportunity to review Infernax. It’s another top notch title from Berzerk Studio, and it’s perfect for fans of platforming and old school challenge. Featuring multiple endings, tons of humor and epic bosses, it’s a game that should be on the radar of every hardcore gamer out there. If you’re a fan of platforming and love letters to games of the past, go buy this game. It’s that simple. 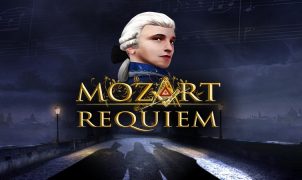