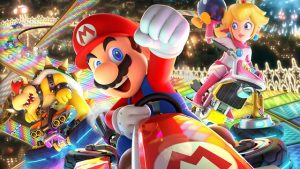 In a sign of the direction the gaming industry is going, Nintendo announced during today’s direct that they’re releasing extensive DLC for the 2017 upgrade to their 2014 racing game. Mario Kart 8 Deluxe Booster Course Pack will release March 18th. Well, wave 1 will.

Don’t let comments about how strange all this is make you think this isn’t a worthwhile update. It feels like some of the most extensive DLC Nintendo has released. Nintendo are releasing 6 waves of 8 courses, for a total of 48 courses. These remastered courses are pulled from throughout the series. Even Mario Kart Tour is represented!

These updates are set to release by the end of 2023. A 2 year plan for a 5 year old upgrade to an 8 year old game. That’s all. It feels pretty safe to say if Nintendo has a two year plan for this version of the game, we aren’t seeing the sequel so many have asked for anytime soon. The Booster Course Pack will release for $24.99, though subscribers to Nintendo Switch Online Expansion Pass, the more expensive version that includes N64 and Genesis titles, will get it for free. While still perhaps a bit overpriced, the value there is getting better all the time. We’ll be interested to see what gets added next.