Blackwind Review: About as Interesting and Engaging as Reading Tax Codes

Every now and then, you play a game so unremarkably bland that you struggle to remember enough about it to cobble together a review. Unfortunately, Drakkar Dev’s sci-fi hack-and-slash Blackwind is one of those rare games that manages to be boring and forgettable without ever being outright bad. So what makes a game that’s full of action so very, very dull? Let’s dive in.

A Gawky Teenager in A Fancy Suit 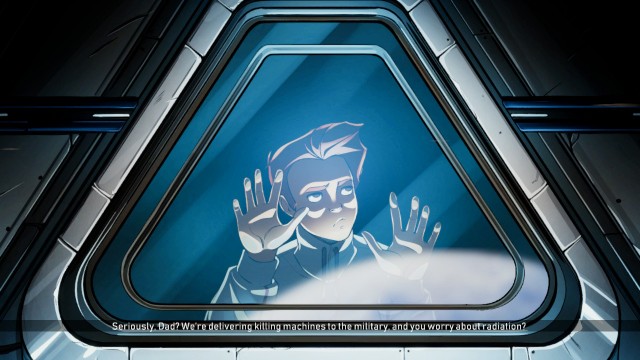 The story of Blackwind follows the misfortune of a gawky teenager named Jimmy. Jimmy and his dad, who happens to be some sort of brilliant scientist, are on their way to make a delivery to some planet. Trope-ily, their ship is attacked, and Jimmy is shoved into a prototype battle mech/robotic armor known as the Battle Frame. He gets jettisoned just before the ship blows up. Of course, we don’t actually see Jimmy’s dad die in the fiery explosion, so the game leaves open the possibility that maybe, just maybe, he’s not dead. Unfortunately, the story doesn’t really get better from there. And the “humorous” banter between Jimmy and the AI of the Battle Frame just ends up feeling so, so forced. And the voice acting! While it’s nowhere near the unbearable levels of, say, Chaos Wars, it’s still awkward, stilted, and just… not good. You will quickly grow very, very tired of Jimmy saying the same thing over. And over. And over. 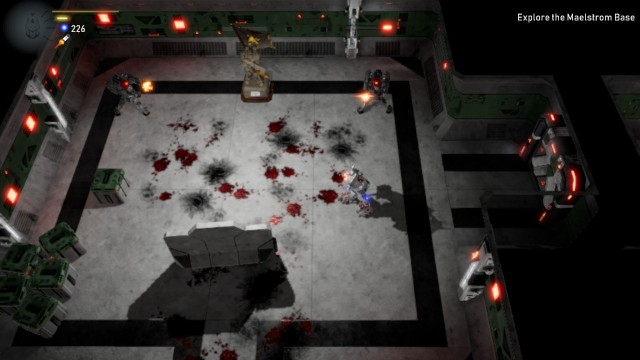 It’s unfortunate that the gameplay doesn’t really make up for the bland story and the subpar voice acting. If I had to choose just a single word to describe Blackwind’s gameplay mechanics, it would be: basic. There’s nothing that’s really going to jump out and hook you, nothing that makes you want to come back and play more. They just kind of… exist. Once you are in control of the Battle Frame (with Jimmy stuck inside of it), you’ll explore a fairly good-sized map and progress from one area to the next. You’re given a top-down view, which generally works – until you run into enemies or bits of geography that apparently don’t have clearly defined boundaries. I have to say “generally” because every now and then, you’ll get stuck on a random piece of geography in the level, and it’s almost impossible to get off whatever gets you stuck. Sometimes that happens at the worst possible time – such as when you’ve stumbled into a swarm of enemies, and you can’t get at them.

Gameplay is your standard fare of “start at point A and find the exit at point B.” This would be perfectly fine if it wasn’t for the fact that the levels are fairly uninspired and start to look repetitive pretty quickly. Sprinkled throughout each level is a puzzle or two, though they’re mostly just finding a button that unlocks a door that you’ll have to backtrack to. Occasionally said button will move a platform, and at its most exciting, the movement of that platform will have a time limit before it returns to its original position. Sadly, none of these elements add any excitement or any real challenge to Blackwind, and feel tired before you’ve finished more than a few levels. 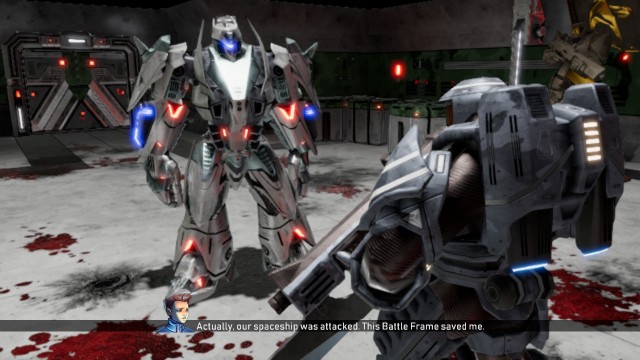 So how about Blackwind’s battle mechanics? Can’t have a hack-and-slash without some hackin’ and slashin’, after all! Too bad there really isn’t much hacking or slashing to be had. There are two methods to attack: ranged laser attacks, and close-combat hacking and slashing. When using your ranged laser attack, controls will switch to a twin-stick shooter configuration, with the left joystick letting you move and the right joystick letting you aim. You’ll switch to energy blades for close combat, and you can chain together light and heavy attacks into combos. Once the enemy’s health drops low enough, you can perform an execution move that starts off feeling rather satisfying, but quickly loses its fun when Jimmy won’t stop saying the same handful of execution lines. Unfortunately, the enemies themselves only come in a handful of varieties and start to look and feel the same before too long. To Blackwind’s credit, you will gain blue orbs when you defeat enemies that you can use to upgrade your mech, giving you increased attack, new abilities, and more. While still pretty basic, it’s a welcome addition to the game.

Aesthetically, Blackwind is a decent-looking game. The environments tend to get repetitive, but they’re perfectly serviceable. I thought the mechs looked pretty good, for what it’s worth. Sadly, the enemies are fairly nondescript, and, like much of the rest of the game, end up feeling just so repetitive. Thankfully, the music is pretty good, so there’s that.

Overall, Blackwind is a regrettably forgettable game. Unable to decide if it’s a twin-stick shooter or a hack-and-slash, with repetitive (and sometimes downright boring) level design, and cringe-inducing voice-acting, there’s little to recommend here. Honestly, the best way I can describe this game is in terms of food: Blackwind would be unflavored, plain oatmeal. Sure, it’s edible, but do you really want to eat it?