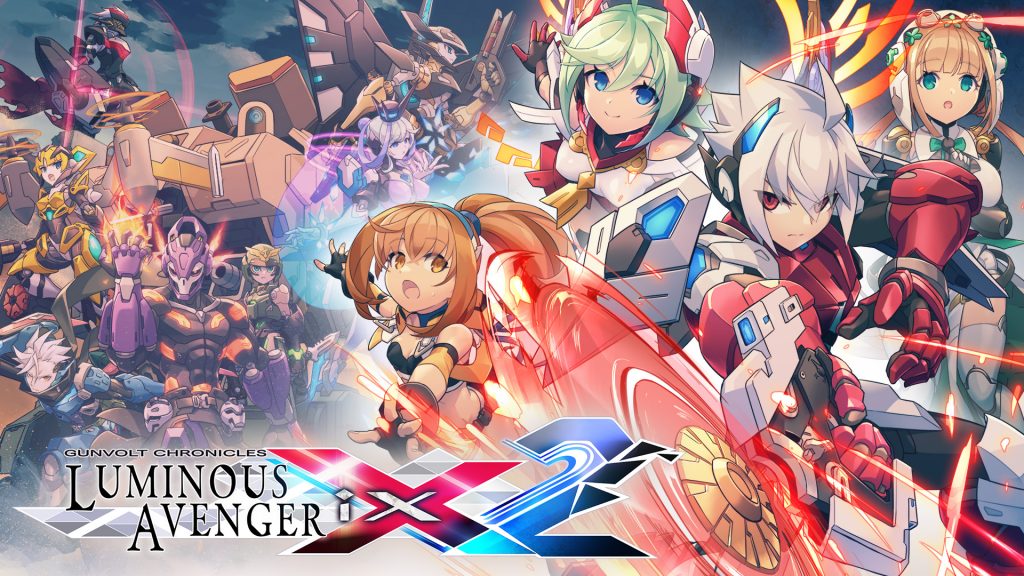 As I write this, I’m surprised this is one of the few Gunvolt reviews on the HPP site. But since I’m such a fan of the Inti Creates series, I figured we might as well make up for lost time with the latest Gunvolt Chronicles entry, Luminous Avenger iX 2! This side series follows the adventures of Copen, who began as a rival character to Gunvolt. Though born a powerless human, his brilliant engineer mind was able to weaponize the powers of the Adepts. Over time, he found common cause with Gunvolt, though calling them friends would probably be a bridge too far. Now, after the tumultuous events of the last Luminous Avenger iX, Copen finds himself in a completely strange setting. A mysterious piece of technology shows up on his doorstep, and as he starts examining it, a portal appears and drags him, his droid Lola, and Kohaku inside. They awake in a world without humans or Adepts. In their place is a community of robots called Workers. One befriends him, a drone with the curious name of Null. Thus begins Copen’s quest to figure out what’s going on and find a way back home. The question this Luminous Avenger iX 2 review will set out to answer is this: does this sequel manage to break new ground? Or is it just a perplexing side story?

You’re Not In Kansas Anymore

After arriving in this strange new world, Copen comes across a titanic piece of architecture called the Grave Pillar. Lola suspects the way home might lie inside, but reaching it will be far from easy. Each of the many sectors within the tower are guarded by powerful Workers referred to as Gravekeepers. Their goal is to keep the secrets of the tower safe, which means Copen will have to rip the information he needs from their robotic husks. Doing so is also the only way to unlock the many keycards gating away sections of the tower, so Copen doesn’t have much choice. He tries for a peaceful route, but circumstances intervene. But as a fan of the Gunvolt series, that’s totally fine with me, since these games are all about frenetic action and powerful bosses. 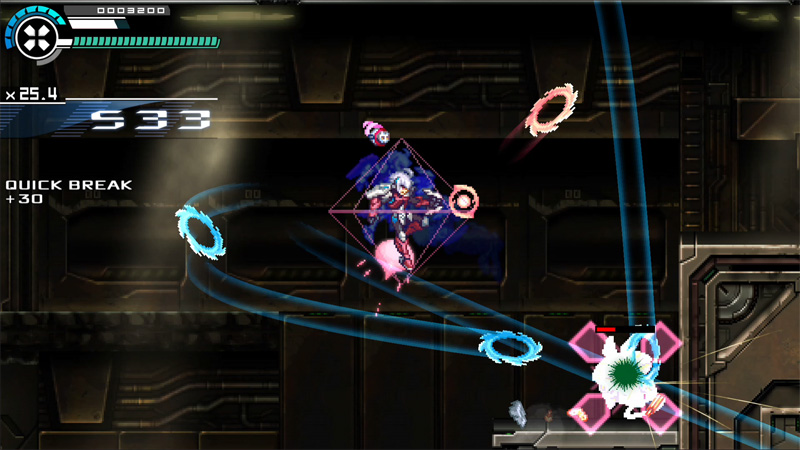 I’m especially thankful that I played the previous Luminous Avenger iX, since iX 2 does some things surprisingly differently. In the previous game, Copen could dash about carelessly, tagging foes to then strike them with homing attacks. And while you can still dash and tag enemies here, there’s one huge difference – Inti Creates did away with the Bullit and Prevasion systems. In the past game, each Bullit was expended whenever you tagged a foe. So long as you had one remaining, you could do another dash. Considering you had 3 Bullits, that was a lot of freedom to maneuver. Additionally, if you had a free Bullit, Prevasion made sure you could evade any enemy attack at the cost of expending the Bullit. In Luminous Avenger iX 2 you have no Bullits. Which essentially means that after you’ve locked onto an enemy, you can’t air dash again until you connect with solid ground. Which sounds extreme, but thankfully there’s one key proviso – the Overdrive system. 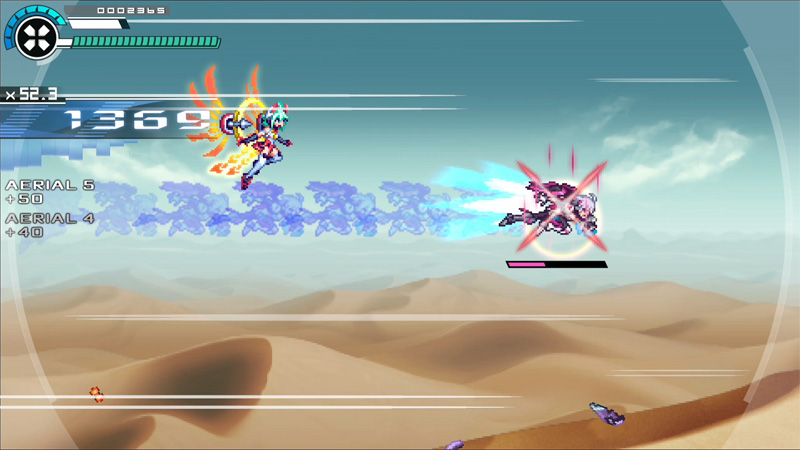 Though the last game had an Overdrive, which basically powers Copen up if you reach a high enough combo count by scoring lots of Kudos, here it is integral. Once you have at least 1000 Kudos, your Overdrive gives you a meter. So long as it’s not empty, you can dash, again and again, flying about like a madman. This effect lasts so long as your Overdrive remains active. So essentially, the Overdrive here lets Copen function like he could without it in the last game. Another big difference is he has the Razor Wheel weapon. It’s primarily used for ground-based attacks, and lets you do rapid-fire combos to cut foes in half. It’s complemented by a ground dash that doesn’t allow lock on, but does let you push heavy objects, as well as stun some enemies. 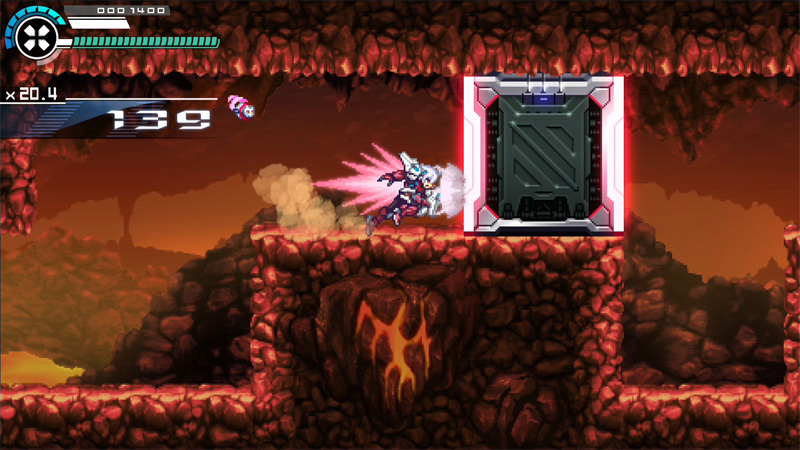 At first, I was really perplexed by the game making Overdrive so much more integral here, but I grew to appreciate this change. It forces you to play better since earning enough Kudos isn’t an easy task. It requires you to avoid the luxury of checkpoints and learn stage layouts and enemy attacks. More importantly, it encourages you to avoid the newly implemented Healing skill. You can technically heal as often as you like, but doing so ends your current combo count and turns your Kudos into your base score. Which basically means doing so guarantees you’ll get a much lower score for each stage, not to mention turning off Overdrive. But fret not, since I used a lot of healing as I played the game, and still managed plenty of B’s, not to mention the occasional A and one glorious S. 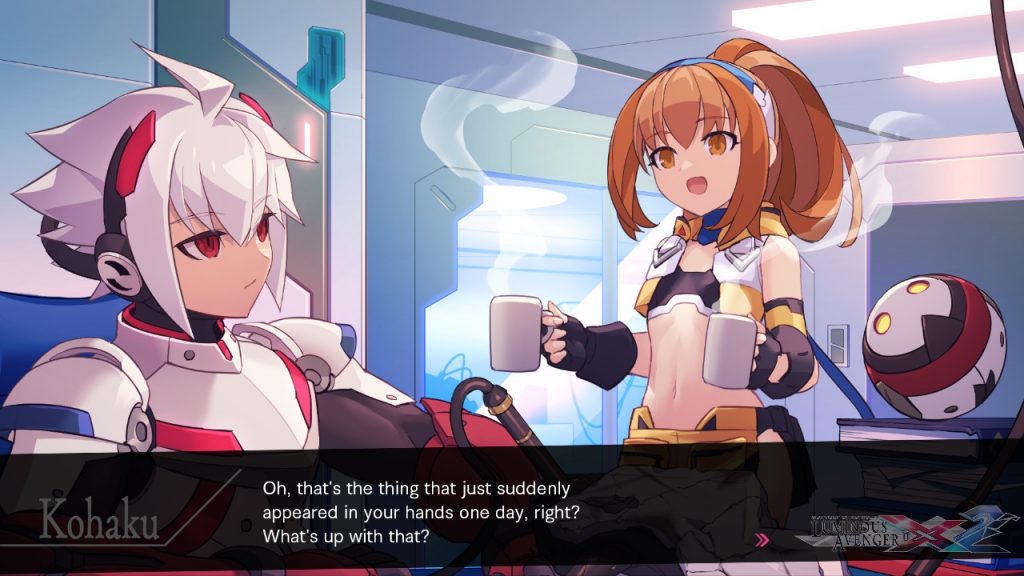 Suffice to say, even with the changes, Luminous Avenger iX 2 is a rollicking ride. The combat is fast, punchy, and challenging. Each stage is quite expansive, full of hidden corners to search and optional items to find. As you play stages, you’ll find crystals that serve as currency, and which can be used to purchase upgrades for Copen. These include abilities like magnetically drawing items to him, reducing damage while grounded, and much more besides. There’s even one that rewards him with more crystals based off the score you get at the end of each stage. And while none of these upgrades are strictly necessary, you’ll want to invest in them for one key reason – the bosses in the game can and will kick your ass. 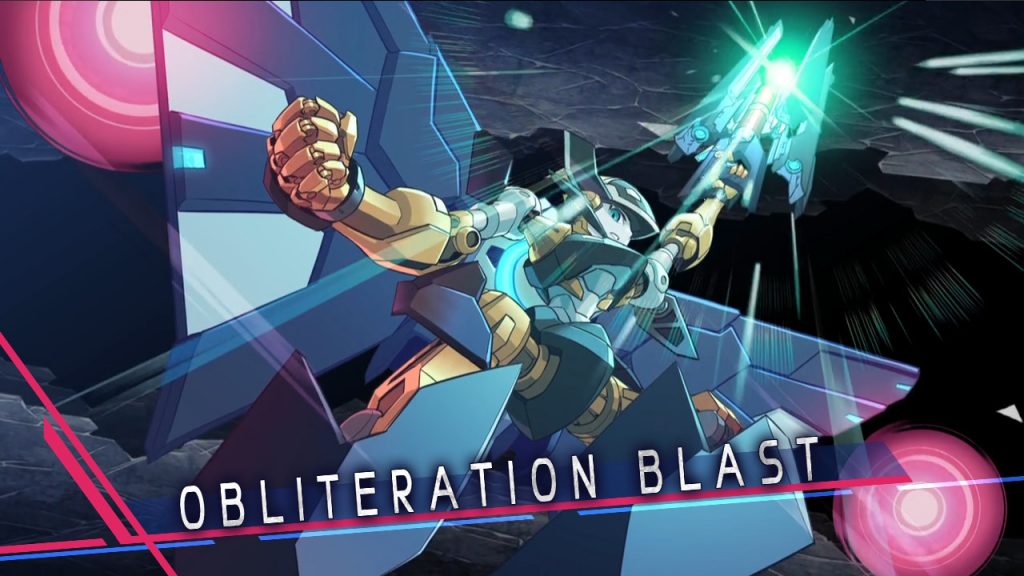 Most of the bosses in the game are Gravekeepers, with a couple exceptions. I’m not sure how Copen can tell they’re robots, since many look quite humanoid. Regardless, they’re each empowered with a different combat style, and none of them are remotely similar in how they fight. Early on, you’ll face Ypsilon, a shield-bearing recurring boss that can mimic the weapons of others; later, you’ll deal with the fiery Dacite, who shrouds every attack with burning flames; and one of my favorites is Brigade, who looks like a puny soldier until he jumps aboard his massive mechanized mobile suit. Each and every boss has complex attacks they’ll utilize, and when you whittle their health down to the last bar, they unleash a massively powerful super attack that can utterly wipe the floor with you. All the bosses are quite tough, but it’s really satisfying when you manage to defeat them. Best of all, doing so allows Lola to download their EX Weapon for Copen to use, which is pretty helpful, since each boss is weak to a particular EX Weapon. 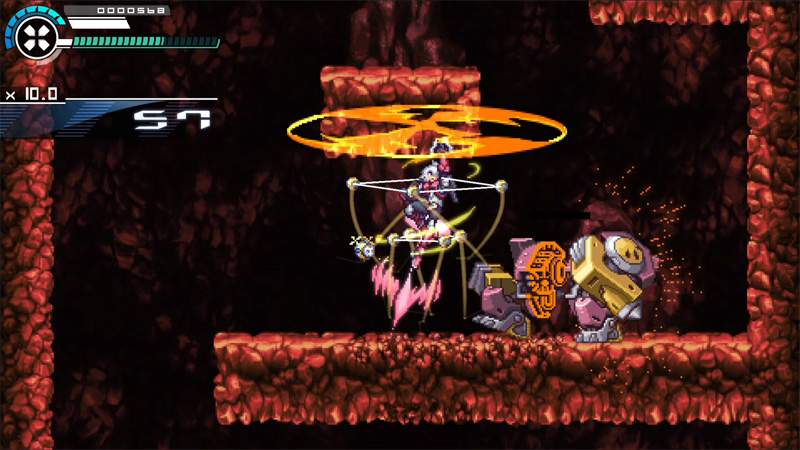 While you can beat Luminous Avenger iX 2 in just a few short hours, there’s some reasons to keep on playing. One is that there’s apparently a secret ending well hidden in the adventure. I didn’t manage to find it before writing this review, but you can bet I’m eager to unearth it. Another reason is you unlock optional missions after rolling credits, similar to the previous game. Several of these just involve facing off solo against the bosses again, but without a giant stage getting in the way. Doing so lets Copen unlock aesthetic changes, which, while not necessary, are also kind of neat. If you really want to test your skills, there’s also a boss rush to challenge, though it’s not for the faint of heart. Lastly, there’s a hidden mode you can unlock, but I’m not spilling the beans how it’s done. Just consider this incentive to stick with the game for a while. 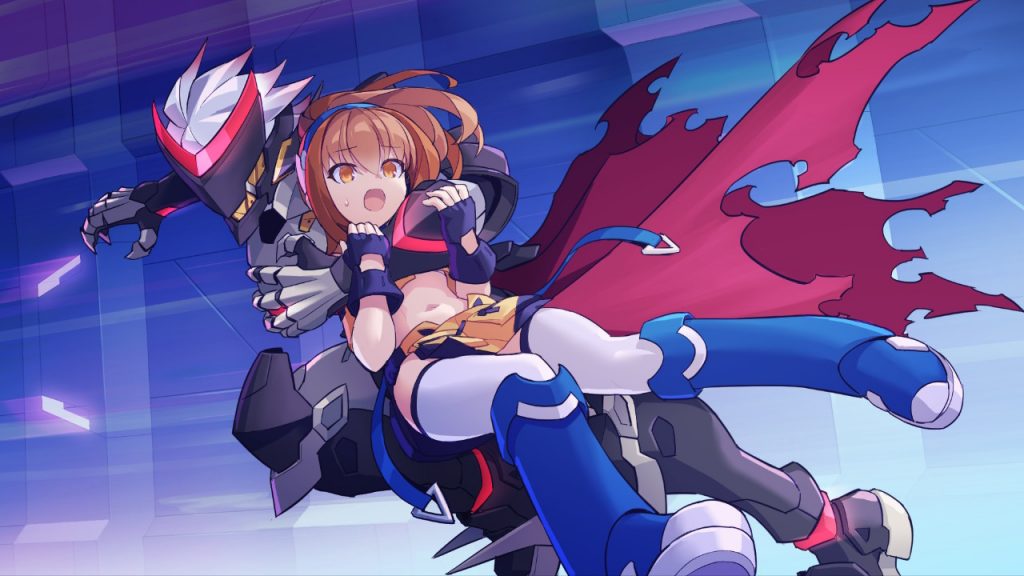 Visually, Inti Creates never disappoints. The game is bold, colorful, and full of attractive little details. While it’s true the design of the Gravekeepers strikes me as a little understated compared to the last game, they’re still all distinct and a joy to behold. Each stage is totally different and brimming with visual flair, from icy tundras to dense green forests and even the depths of space. You’ll have to play them more than once to appreciate everything, but it’s so worth it. I also really like how the boss portraits move about as they activate their final attacks. Musically the game is also wonderful, featuring intense tunes to keep you hacking and slashing.

Additionally, whenever you reach Overdrive, Lola will sing a different song, just to spice things up. Special note also goes to the English voice actors. They lend a lot to the experience, and though I had nothing against the Japanese VA in previous entries, it’s nice to hear it in my native tongue. As always, the latest Gunvolt Chronicles game is immaculately designed to delight the senses. 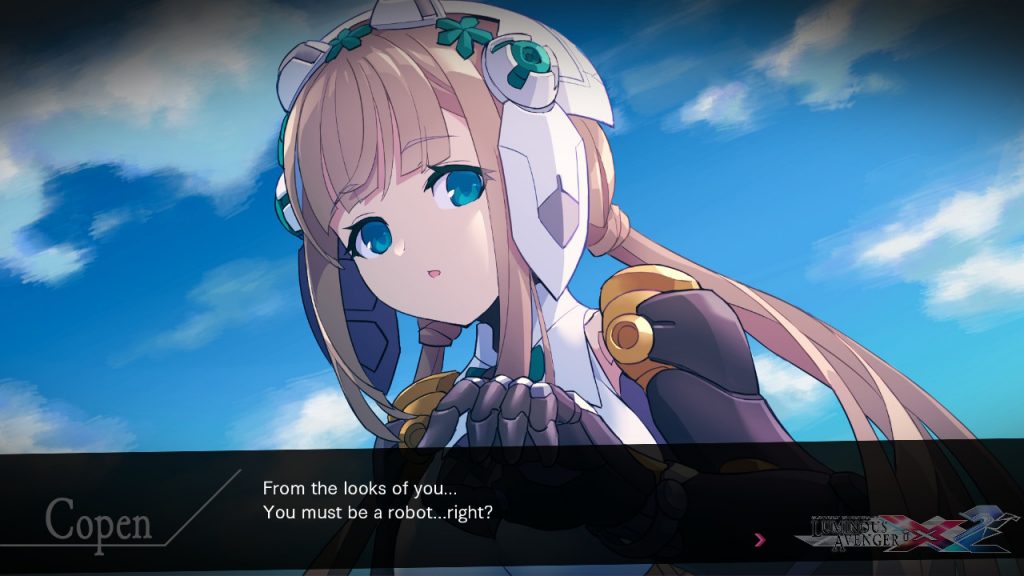 There’s a ton I enjoyed about Luminous Avenger iX 2. But I’d be lying if I said it didn’t do anything wrong. When I reviewed the last entry, I touched upon the things the game could have done better. Suffice to say, only one of these areas was improved, which was focusing less on unimportant side characters. I was also a bit frustrated by how long the story took to reveal anything significant. It basically makes you wait until the very final stages to get any clarity on what’s happening and why. And once I did, it just felt like this was a random side story, though that opinion might change had I experienced the secret ending. Lastly, though I don’t often complain about price, it struck me as odd that this game is about $10 more than the last one, despite including approximately the same amount of content. I’m not saying the game isn’t worth buying, it absolutely is, but I also feel there should be some better justification for the increased price point.

Ultimately, Luminous Avenger iX 2 is an attractive and challenging action platformer that nevertheless fails to learn key lessons from the previous game. That said, if you’re a fan of the Gunvolt series or a platformer enthusiast, this is very much your game. If you’re not in that camp, you might wanna skip this confusing side adventure.