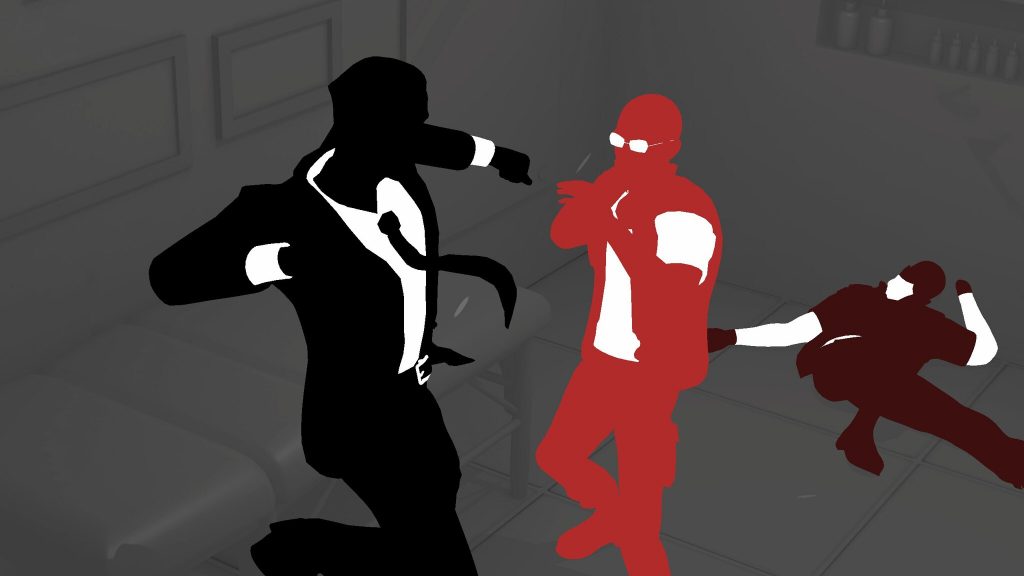 I’ve done it! I’ve found the perfect deck-builder to recommend to people unfamiliar with the genre: Fights in Tight Spaces. Oh sure, it didn’t get the same level of excitement this year that, say, Inscryption received, but it’s got everything necessary to hook those who haven’t yet done themselves a favor and explored this delightful genre. And for those who do love deck-builders, you’re in for a speed-running treat.

Developed by Ground Shatter and published by Mode 7, Fights in Tight Spaces is an action-packed mash-up of deck-building, strategy, and fighting games. Available on PC and XBox for $24.99, Fights in Tight Spaces has already received an Overwhelmingly Positive rating on Steam — not bad for a game that’s been out of Early Access for only a month! Featuring a slick soundtrack, minimalist visuals, and addictive gameplay that’ll rope you in from the word “go,” Fights in Tight Spaces packs a punch with its brainy, brawny, and bold mechanics. 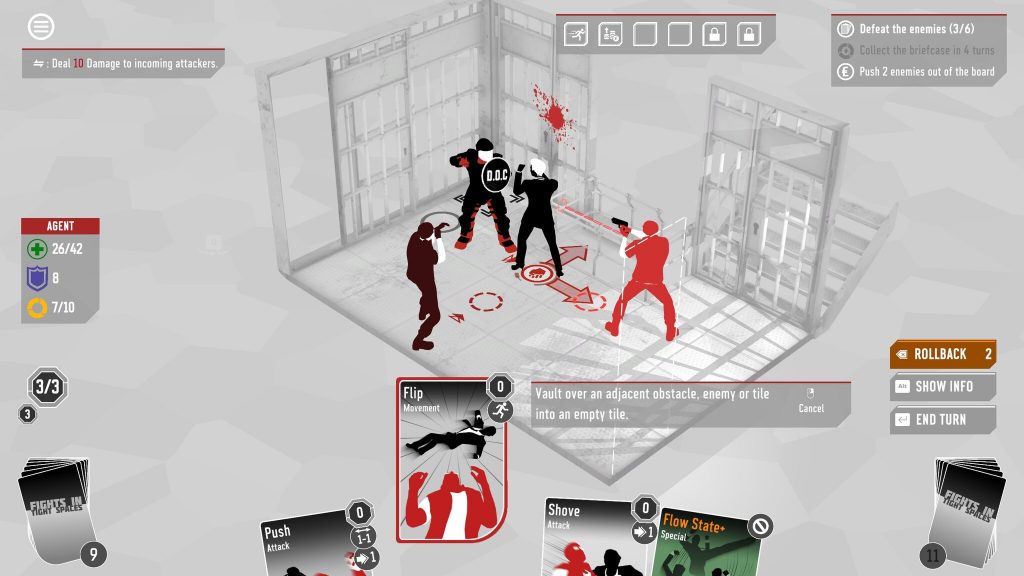 Fights in Tight Spaces has players taking on the role of Agent 11, a powerful and efficient killing machine who stops at nothing to get the job done. What’s the job, you may ask? Why, take down the baddies, of course! From beating up biker gangs to breaking up prison communication efforts, players will bare knuckle brawl against all who stand in their way, all while making sure the beatdown doesn’t extend past the confines of the target area. All in a day’s work for the best agent on the force!

True to form, Fights in Tight Spaces pits players against enemies in small enclosures. In a normal brawler, this might be a frustrating endeavor, but Fights in Tight Spaces is a turn-based deck-builder strategy game, so things run a bit more smoothly than your average free-for-all. To quickly sum, Agent 11 and the enemies are in a small, grid-based area complete with walls and the occasional obstacle, like tables, chairs, counters, etc. Players will draw their cards, which have varying moves such as a hook kick, a quick block, or a shove. Some cards will allow you to slip between baddies and force them to accidentally hurt each other in the process, while others will enable you to use the environment to assist in talented takedowns. Carefully choosing which attacks to dish out while avoiding taking damage is the name of the game in Fights in Tight Spaces, and it’s a lot more complicated than it looks!

As Agent 11’s campaigns move forward, they have the ability to gain more cards, upgrade individual cards or their health, remove negative effects, earn (or lose money), and more. These moments of planning are incredibly helpful, especially upfront, as health does not regenerate after each fight. That’s right — if you get your ass handed to you in the tattoo parlor, prepare to be thrown into a dumpster and left for dead in the back alleyway right after. It’s not just about taking down the bad guys in Fights in Tight Spaces, it’s also about doing it quickly (to earn more rewards) and to make sure you don’t get hurt in the process.

I don’t have many complaints (if at all) for Fights in Tight Spaces: after all, it’s got kickass gameplay, an exciting soundtrack, and the cleanest visuals this side of Superhot. Hell, you can even replay your fights at the end of each round, making for some sweet, sweet cinematic spy movie action! I do feel like I have to mention, however, that Fights in Tight Spaces is one of those games that does lean towards “hard to learn, easy to master” in the sense that, once you figure out some clear patterns, the game’s a breeze. With that being said, there are multiple ways to make the game more challenging, including several difficulty modes and, of course, getting all the achievements, so please don’t let any perceived issues stop you from experiencing the glory that is Fights in Tight Spaces.

Fights in Tight Spaces is an easy recommendation to any kind of gamer. It’s perfect for those new to deck-builders or for genre veterans who crave something with a different flair. Fighting game enthusiasts will enjoy the take on strategic brawls that don’t skimp on the style. As for everyone else? Who can say no to glorious aesthetics and surprisingly cerebral gameplay in a bloody beatdown package? Definitely give Fights in Tight Spaces a shot — it’s a knockout!

Editor’s note: This review is based on a retail copy of Fights in Tight Spaces provided by the publisher.