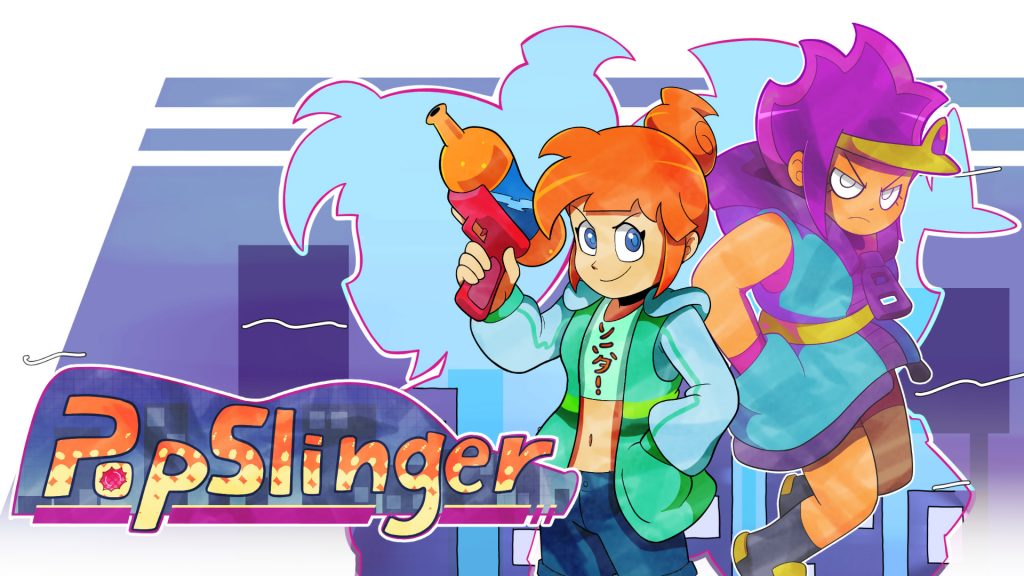 I’m almost always willing to give a game a chance, especially when it’s as colorful as PopSlinger. I adore all sorts of video game art, from pixels to sprites and everything in between. Developed by Funky Can Creative, it’s a game that mixes the beat ’em up genre with magical girls, and results in a really fascinating experience. Because while it calls itself a musical shooter, it’s undeniably a beat ’em up. Stranger still, it’s one where you actually shoot bullets instead of pummeling foes with your fists and feet. Which is unlike any game I’ve played before. The question is, how well does the game meld these elements together? Keep reading this PopSlinger review to discover if this first effort from Funky Can Creative was as compelling as it was unique.

Something Strange This Way Comes 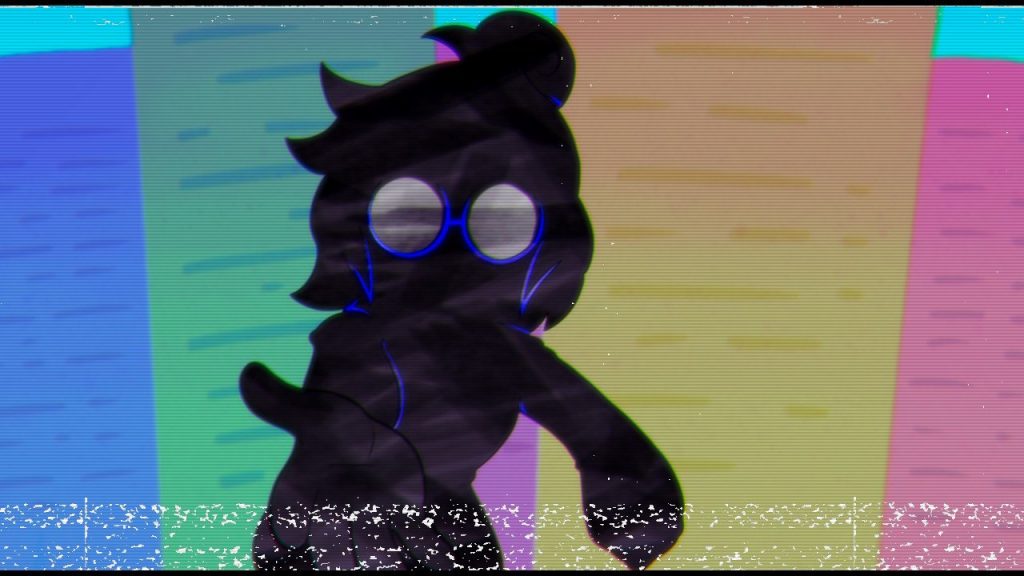 I’d love to explain the premise of PopSlinger, but the truth is it’s not that well explained. I think it’s about an invasion from another reality, but it’s not that clear. There’s a delirious surrealism quality to the narrative, or as I like to call it, anime logic. Meaning a lot of crazy things happen all of a sudden for no apparent reason, and the viewer has to follow along and try and grasp what’s happening. And to be fair, plot isn’t necessarily the main reason you’ll play this sort of game. But for me, I still like to have some clarity why what’s happening is happening. I’m not even sure after playing the game if the invasion was really happening, or a figment of the main character’s imagination. Which is more than a bit frustrating, since it made it nearly impossible for me to empathize with the primary characters – Ria and Gin. 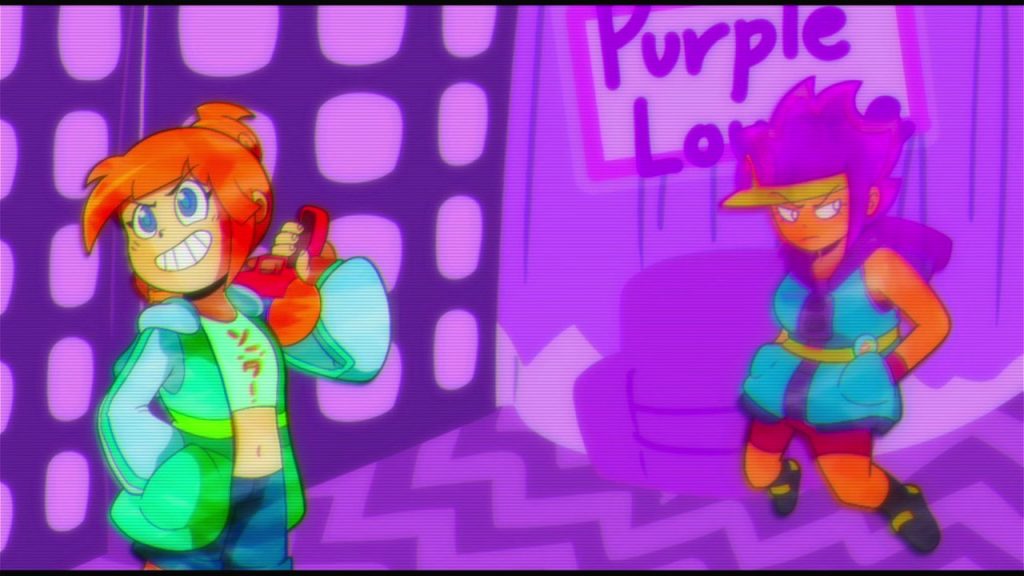 What I think is clear is that Ria is the one going on the adventure, and Gin is a sort of spiritual advisor. And I mean that literally, since she seems to be ethereal and essentially a ghost most of the time. I’d say she’s there for moral support, but she gets so regularly irritated by Ria’s overconfidence that it wouldn’t be a fair statement. Luckily, Gin doesn’t have to like Ria to work with her, and she’s there to help provide wisdom and clarity on how to be a PopSlinger.

What is a PopSlinger, you ask? They’re heroes that fight with special guns. Do you remember Super Soakers? Imagine if they shot various types of soda instead, and you’re on the right track. For whatever reason, your soda-powered armament is the only thing that can stop the otherworldly invaders and their strongest warriors, the Corazones. Corazones are once regular humans that have been utterly corrupted by the invaders, and have given into their worst desires. As part of the bargain, they also gain special powers. This essentially means the most mundane folks are suddenly a threat to reality. Corazones range from skateboarders to wrestlers to influencers. Which might sound weird, but they’re no less of a danger, and can easily pummel Ria if you’re not careful.

Pop to the Rhythm 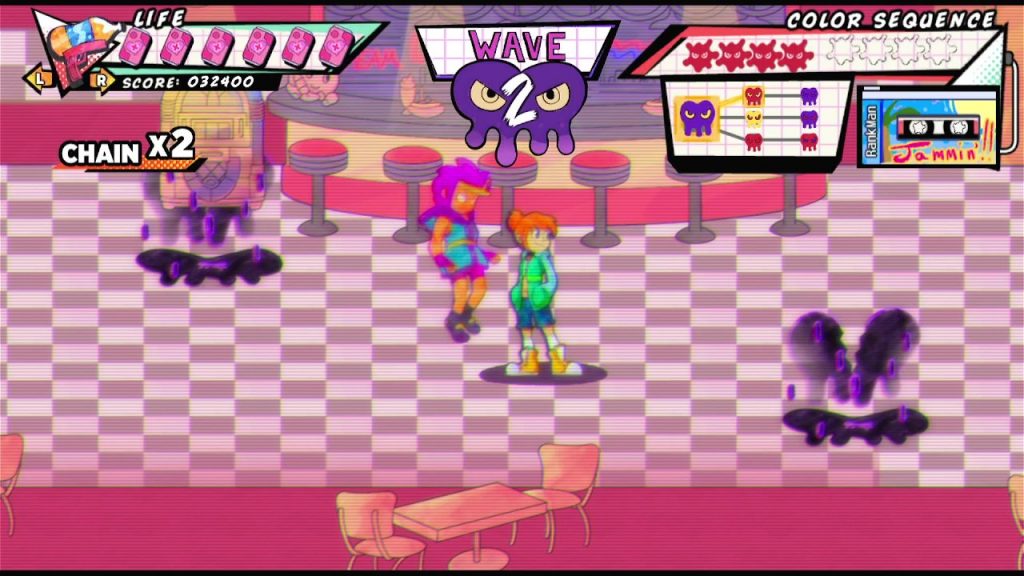 The game has a unique hook to keep things fresh. All the foes you fight, other than bosses, are color coded. By defeating 4 of any color without getting interrupted by an attack or accidentally blasting the wrong colored foe, you’ll get temporary Popping Powers from Gin. Killing 4 yellow nets you shield; 4 blue turns Gin into a turret that follows you around; and 4 red provides you a double shot. But it’s more complicated than that. Each stage also has a set order you’re supposed to pop foes in, at least if you want the most points. Doing so lets you do things like heal or access Dream Time, which temporarily makes Ria unbeatable.

All that is great in theory, and when you’re in a flow the game is a lot of fun. The problem is, PopSlinger has a lot of issues that make doing any of this a challenge. Often you’ll fight against waves of random enemies that spawn from portals, and they may not correspond to your color groupings. So you’ll have to dodge past them and wait until the right color arrives. Worse is that taking any damage destroys your combo, and Ria’s movement is more than a bit clunky. Oh and did I mention the hitboxes in this game are really hard to figure out? I’ve been right across from a foe more than once, and somehow not hit them with my soda guns. 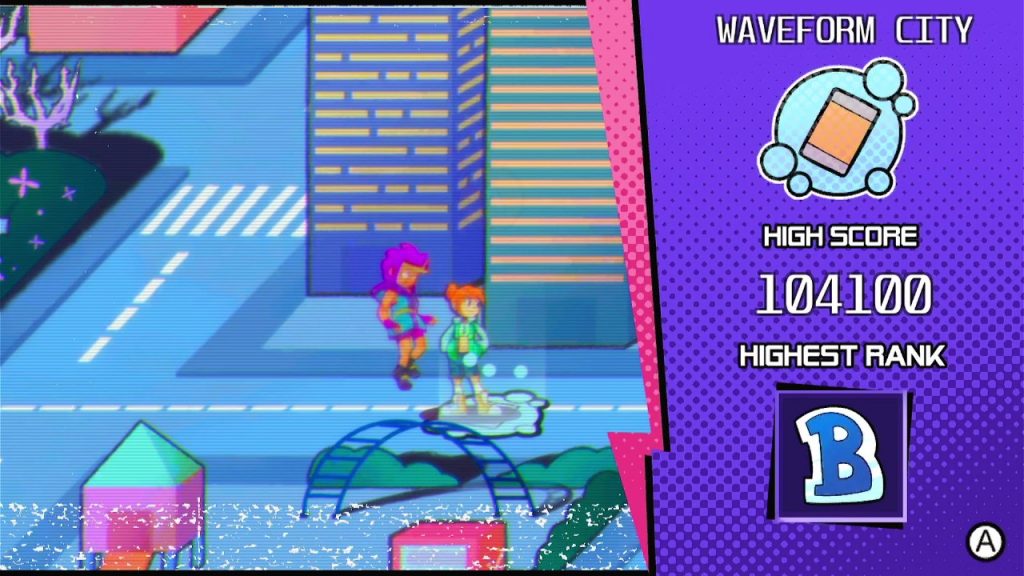 That’s all frustrating, but the absolute worst offender that makes the game a chore is the camera. It regularly doesn’t display the entire screen, often panning in and out for no apparent reason. Making this worse is the fact that the overlay showing your combo meter blocks part of your vision of the top of the screen. So not only can you not see most of the surrounding area at any time, but not being able to do so has immediate repercussions on how well you play. And did I mention each level scores you, and that your score will determine whether or not you can actually play the final level?

I am not a fan of games that gate regular content like this, and you’ll need at least a score of B on every stage to access the final area. Suffice to say, I regularly got scores of Ds, despite my best efforts. And even though I put in a lot of time improving my score in every level, there’s one that will make life challenging. It’s the second part of the Purple Lounge. Not only is it the only stage where you’re separated from Gin, but that means you have no access to any of your powers. No Popping Powers, and worse, no healing for a huge stage. And though I was able to finally get through the stage without using any continues, even that wasn’t enough to get the requisite score. Which was more than a bit annoying, since this was easily the most difficult stage in the entire game. 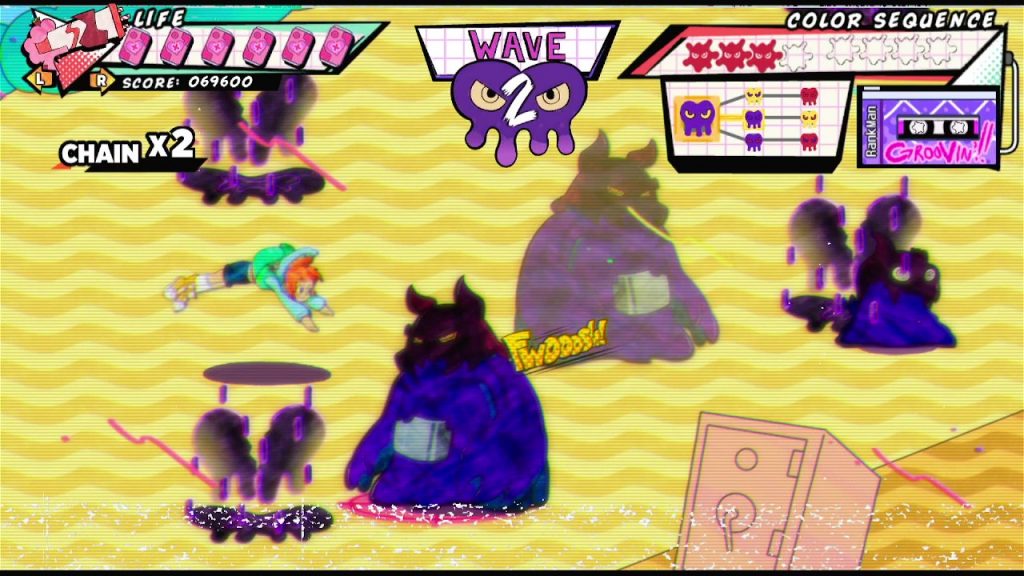 I’d like to let up on PopSlinger, but there’s other issues that kept the game from being a true success. While I appreciate how every boss you beat provides more permanent health for Ria, as well as a new gun you can use, there’s one big issue. The bosses have too much damned health. This won’t be apparent at first, but you’ll notice once you get to the second boss in the game. She exemplifies all that’s wrong with the experience. She runs around, blasting you while off screen and placing mines that explode in your face. She then gets faster and more powerful as you damage her, and even summons enemy portals. But instead of you being able to pop those foes for Popping Power upgrades, this boss kills them before you’re able to.

Later in the game, enemies start sporting shields. While I don’t necessarily mind these, there’s a catch. Each shield is a different color, and thus requires a specific gun to remove it. Ria will eventually have 4 guns – Orange, which is her standard shot; Strawberry, which is a triple shot; Cola, a giant carbonated beam you have to charge; and Lemon, which launches an explosive round that hits multiple foes. Each of these guns is color coded, which is great. What’s not is that their colors don’t naturally correspond to the enemy shield colors. Other than using Strawberry to deal with red shields, the rest are trial and error to figure out. 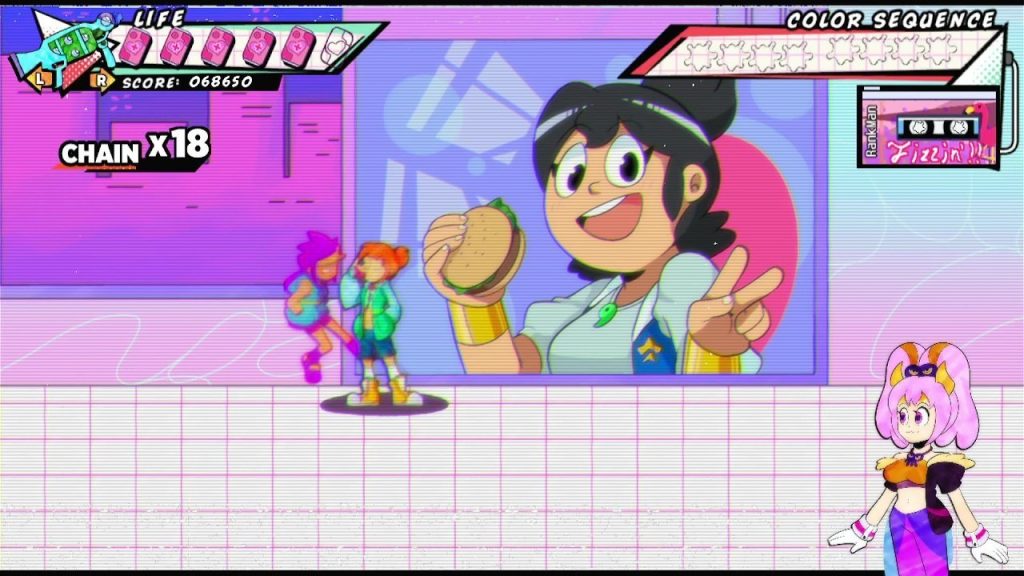 One area that PopSlinger does well is with the visual design. I love how colorful and full of personality the hand drawn artwork is. It lends a lot to the characters, and it’s also pretty memorable. It reminds me fondly of the likes of Scott Pilgrim. The game also has good music and decent voice acting. If I were just rating the game based on how it looks and sounds, it would have gotten a much higher score.

Unfortunately PopSlinger is a hard game to recommend to most gamers. If the developers can make a concerted effort to balance and streamline the camera and combat issues I pointed out, as well as helping the game provide clearer visual cues, I think this could be something special. As it is now, however, it’s just too much of a mess to recommend to anyone that isn’t willing to put a ton of effort into the experience. Hopefully Funky Can Creative learns from this game to make their next adventure one that lives up to the hype. 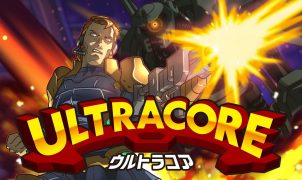 Cracking Open A Bullet-Riddled Time Capsule   Ultracore’s story is one 25 years in the making. Originally slated to release on the Genesis, Sega CD, and Commodore Amiga in…