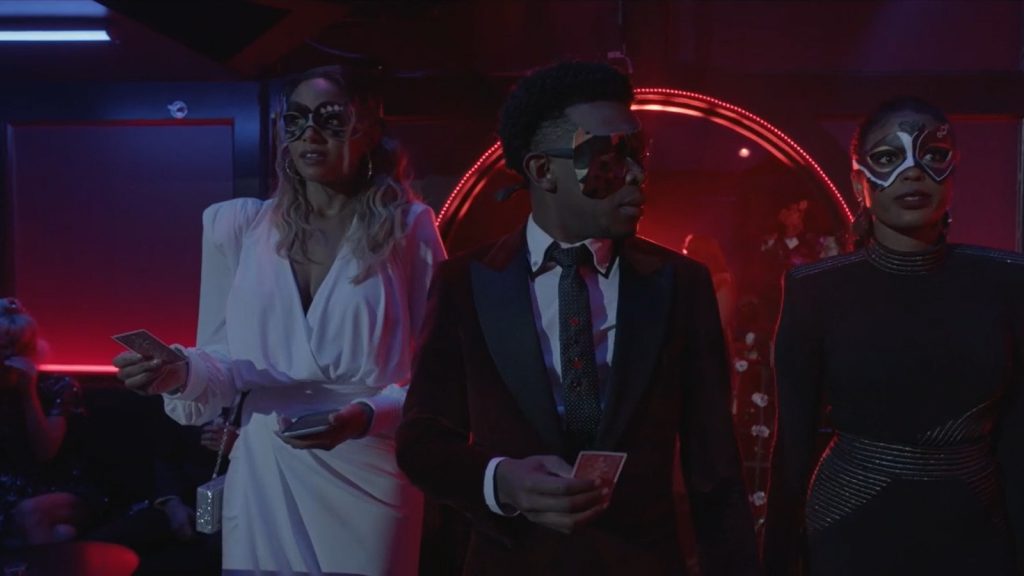 It’s been a long wait for the return of Season 3 of Batwoman. Luckily, True Destiny didn’t keep us waiting. Things picked up pretty much immediately after the last episode, minus some spa time undoubtedly enjoyed between Poison Mary and Alice, who are now incredibly close, much to the chagrin of Ryan and friends. It kept the focus right where it belonged – on the now villainous and empowered Mary, as well as demented little bro Marquis, who I’m now calling Dark Joker.

Before things pick up, True Destiny takes us on a trip down memory lane. 10 years ago, Renee Montoya was just a rookie trying to capture her once girlfriend turned supervillain, Pamela Isley. She and her partner find her, and her partner gets impaled when Montoya hesitates. Back in the present, Mary and Alice are enjoying a luxurious stay at some unfortunate hotel in Metropolis. The manager marches in to complain about how their credit cards have all been declined, and Mary does her pheromonal hoodoo. What I found most interesting is that even now, with Mary fully in the grips of her transformation, she’s still not gung ho about using her powers. Which may mean there’s a little bit of Mary still trapped in that psyche. Unfortunately, she’s still bitter and angry with Ryan and Luke, and Alice gives her horrible advice on how to get them off her tail – make them hate her more than they love her.

Renee strolls down memory lane again, and we discover her partner didn’t die, despite being impaled by Ivy’s vine. He just lost a kidney. And to my surprise, Renee is still talking and not shooting her former lover, who has arrived with a gift of white tulips to signify forgiveness. They have an extended argument about Pam’s villainous transformation, and how she’s abandoned everybody that loves her. Unfortunately it all falls on deaf ears, since all Ivy cares about are her plants and Renee as well, to a lesser extent.

Even Closer To Hell Than Your Office 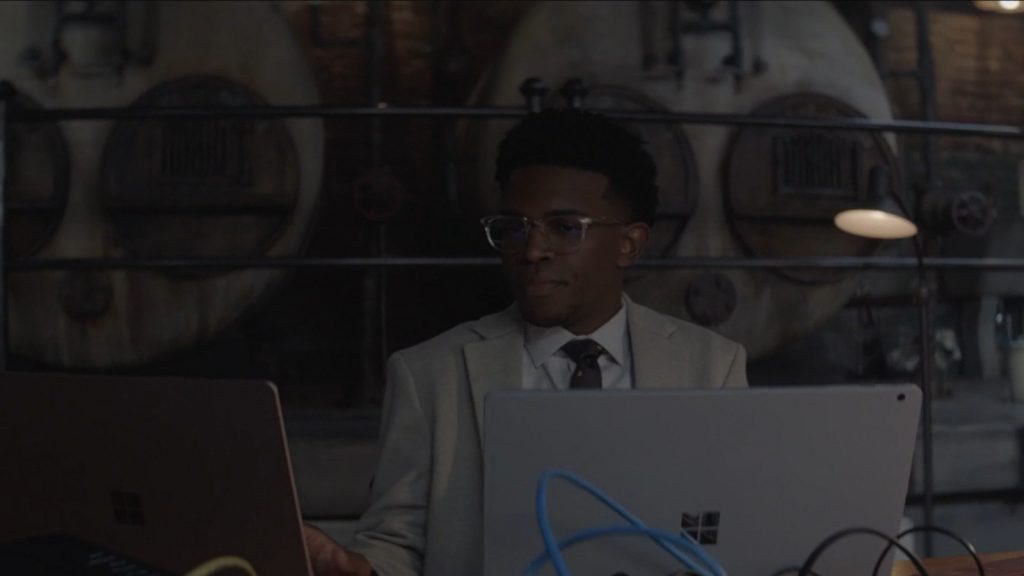 The Bat team are in much less prestigious digs thanks to Marquis’ takeover of Wayne Industries. It looks and smells like a sewer, and Luke has to deal with bad internet. Ryan is the most at ease with the situation, no doubt thanks to living on the streets for so long. But her mood quickly sours when Renee arrives, throwing accusations around that Batwoman is playing with kid gloves. Sophie agrees with Montoya, which really doesn’t help. Then Renee reveals that she tried to help Ivy first, and afterwards worked with Batman to take her down. She apparently used a one of a kind injector and desiccation serum to revert Pamela to a withered state. Their plan then is to find Poison Ivy, take the serum out of her veins, and use it on Mary until they can fix her.

There’s just one complication – they still don’t know where Ivy was hidden away. So they go full Ocean’s Eleven, and discuss how to break into Wayne Tower. Since they were forced out, Marquis has increased security, now requiring a thumb print and retinal scan to get around. It all sounds pretty hopeless until Marquis randomly calls Ryan to gloat. He’s now more vengeful and demented than ever, but he inadvertently reveals an opportunity. Ryan overhears that he’s throwing a big party, a masquerade in fact. So the new plan is to use that as a way to sneak into Wayne, access the Bat Cave and find what they need.

Marquis Jett Is Coming For You, Gotham! 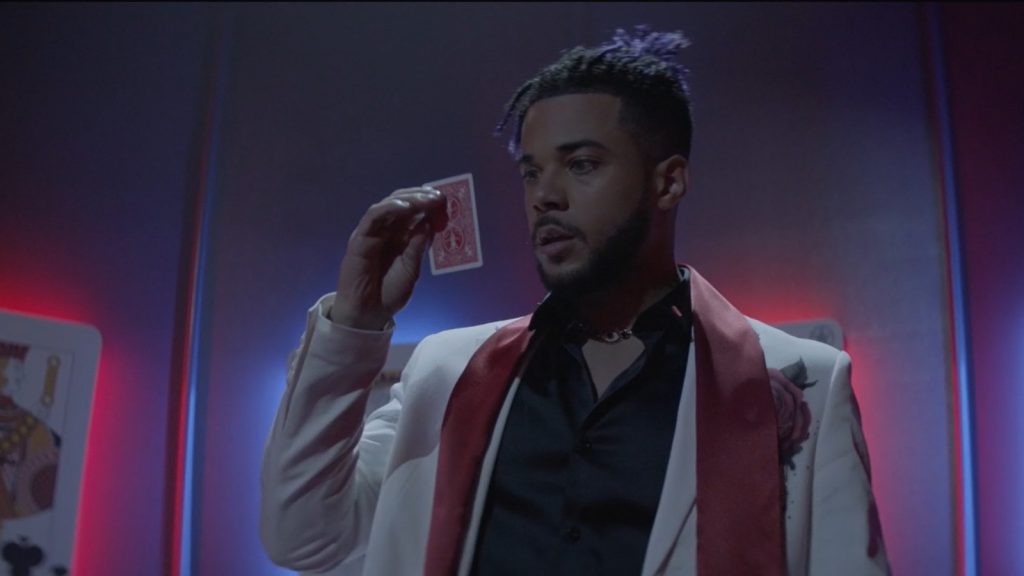 Say what you will about the mental state of Marquis Jett, but the man knows how to throw a rocking party. I mean, certainly, the money he inherited from Wayne Enterprises probably didn’t hurt, but it’s still impressive. There’s acrobatic dancers, pumping tunes and tons of people. AKA the perfect cover for Ryan, Luke and Sophie to sneak around in. There’s a fun back and forth as they ascend the elevator to the party. Luke hacked three guests and convinced them they were uninvited so their identities could be ‘borrowed’. Luke and Sophie are enjoying pretending to be someone else, while Ryan is done with their nonsense. Her job is to get a retinal scan of Marquis with tech in her mask, while the other two manage to secure a thumb print.

Marquis starts ranting about loyalty and trust, and how he fired all the people on the Wayne board. He then starts holding what’s essentially a Hunger Games lottery to pick random guests to take his quiz. He picks random cards from a poker deck, and brings the lucky recipient with the same card up on stage. If they fail, they get electrocuted. If they somehow win his arbitrary test, he’ll consider them joining Wayne Enterprises. Ryan palms a card from a guest after Marquis calls it, and goes up on stage, affecting a French accent for her false identity. While I think it unlikely Marquis wouldn’t recognize his own sister with such a flimsy disguise, it was a fun interaction. And in fairness, there was a lot of darkness and flashing lights at the party, so it’s possible he wouldn’t have seen her clearly.

With all the requisite identification markers in hand, the team heads back to the elevator. Renee apparently found time to crash the party, and so she rides with Ryan and Sophie. Ryan says she’ll take Montoya’s help, and once they find Ivy, they’re done. She wants out of her horrible deal, despite not having found every single item that was stolen. Thankfully, the only remaining one seems to be the Joker’s buzzer, which isn’t nearly as dangerous as the others they recovered. It’s a fair offer, and hopefully it will result in Ryan and Sophie repairing their relationship in the near future.

Who Wants To Play a Game? 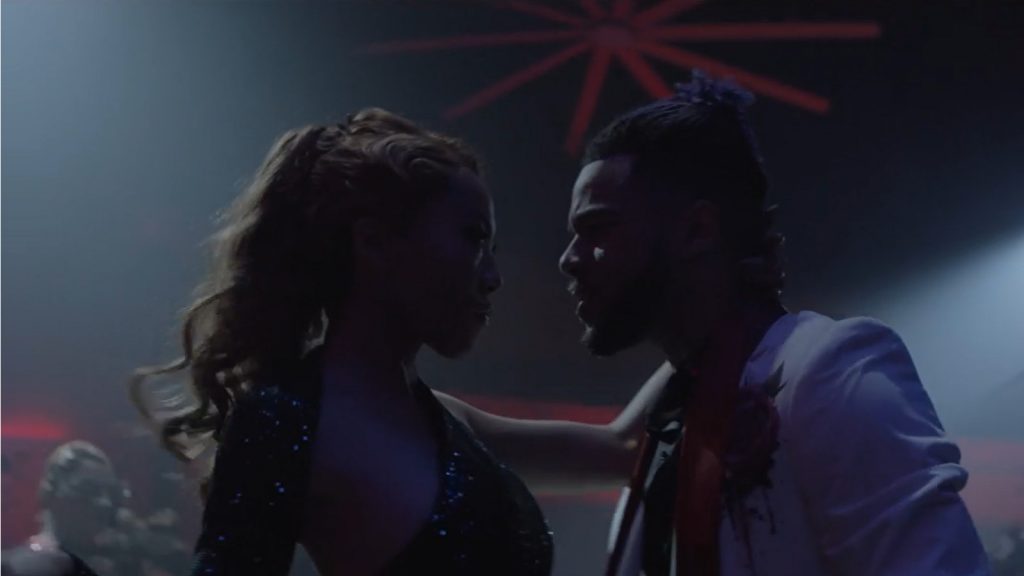 Once the ladies arrive at their destination, they take out some hapless armed goons in face card livery. It’s a lot of fun, with Renee armed with a bat and Ryan and Sophie doing all sorts of martial arts. They mop up and and make their way to the Bat Cave. And just as they start going through reams of paperwork, Mary arrives upstairs. It’s not clear why she’s there, but you can bet it’s not just for the ambiance. She cuts a beeline right to Marquis, has a short conversation with him, and then demands a dance. And the whole while, she whispers dangerous nothings in his ear.

After another Renee flashback, Ryan finally comes to a realization. Ivy had to be planted somewhere without any sun or water, which is a challenge given the fact Gotham is an island. And Montoya reveals Ivy isn’t in any of the prisons or mental institutions. So where would Batman keep someone that he wanted close, but where they wouldn’t be found? The answer is, of course, the Bat Cave. Which is a bit on the nose, but it makes sense, and finally explains the weird root structure in the center of the Bat Cave. Ryan puts on her suit and isolates a heartbeat coming from below. Thus the ladies head into the series of tunnels that the roots occupy in their hunt for Ivy.

Just as they find Ivy’s desiccated body, Mary is making trouble again. She says something that leaves Marquis stunned, and drops something dangerous into his coat pocket. Ryan drains the serum from Ivy, heading upstairs to use it on Mary. She still doesn’t trust Renee, and leaves Sophie with her just in case. Unfortunately for Luke, he gets grabbed by Marquis, who suddenly knows his secret identity. And then, Sophie realizes a fraud alert that she got on her phone likely means Alice is using her credit card, and she runs off to confront her.

It’s Time To Step Up 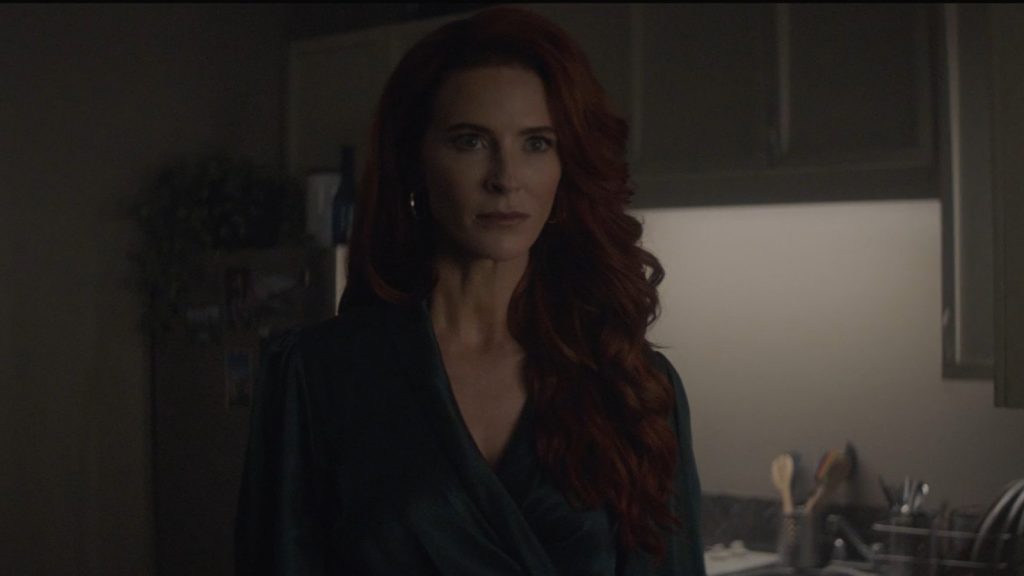 It all culminates with a confrontation between Ryan, Marquis and Mary and a horrible revelation from Sophie. Ryan catches Mary, and tries to inject her with the serum. Mary stalls by asking if she knows how long the chemical compound is viable, which buys time until Marquis shows up with Luke as hostage. Worse, now the demented Joker wannabe knows Batwoman is his sister. He’s moments away from blowing Luke away with his gun when Ryan uses the only item at her disposal to stop him – the desiccation serum. Mary escapes, and Ryan grabs Marquis and takes him with her.

Alice and Mary bond, with Alice revealing since Mary turned poisonous, her delusions have conveniently left her. Meanwhile Renee starts talking to the comatose Ivy, only for a white tulip to grow, prompting a fairy tale kiss between them. And then Sophie reveals what Alice discovered – Renee has had the Joker’s buzzer in custody for a while now. Meaning she was pushing the team to find all the stolen weapons while holding one to make sure they found her girlfriend. Which is sure to be problematic now that Ivy is free and rejuvenated. Overall a good return for Batwoman. Stay tuned next week for HPP’s continuing coverage of season 3!