The Letter Review: Handle with Scare

Visual novels as a genre have really been growing on me lately. I’ve always been somewhat intrigued by them, but there’s something about a playable book that made me hesitant to give them a try. Which is weird, because I absolutely love books; I devour them at a speed my husband finds disconcerting. But, much like deckbuilders, now that I’ve started, I just can’t seem to stop. The Letter, from eastasiasoft and Yang Yang Mobile, checks off some of my favorite boxes, too, being a horror visual novel.

Better Boo-ckle Up For This Ride 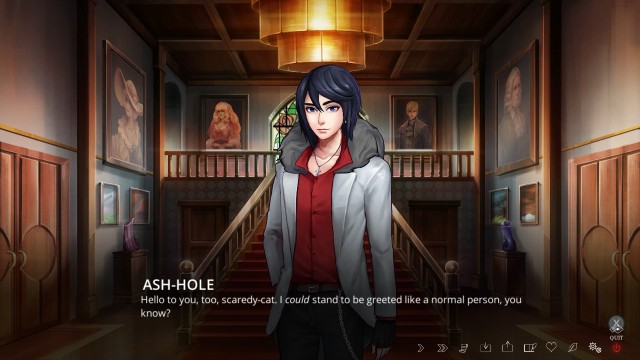 The Letter, being a visual novel, is obviously extremely heavy on the story. As should be expected, it’s about 99.5% story, with that last little bit being a few quick time events found here and there. The game claims that there are more than 700,000 words, and I believe it. To give you a frame of reference, a 300 page book typically contains about 90,000 words. Impressively, all of the external dialogue is voiced. While much of the game is internal dialogue, there are literal hours of voice acting. Even more impressively, most of the voice acting is actually quite good.

The story revolves around a cast of seven characters who are all linked through a strange incident at a mansion on the outskirts of town. Known as the Ermengarde Mansion, it has long been the source of several urban legends, all of them involving curses and death. The cast is really quite diverse; there’s Isabella, the real estate agent who finds the titular letter that starts off the whole chain of events; Hannah and Luke, the absurdly wealthy couple that buy the Ermengarde Mansion; Zachary, the photographer/film-maker; Marianne, the interior designer; Rebecca, the teacher; and Ashton, the detective. 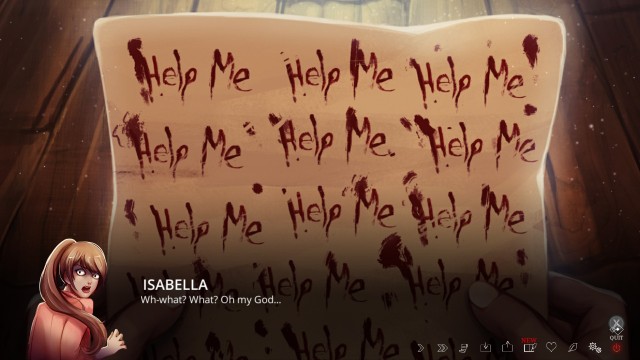 Some of you reading this are old enough to remember the super obnoxious chain letters you’d get emailed to you in the early days of the internet. You know the ones I’m talking about – “Email this to five other people or your house will burn down tonight!” and/or “Forward this chain to 12 people before midnight or you’ll die!” Well, the chain letter in The Letter is like that, except it’s real. Isabella discovers it in the attic of the Ermengarde Mansion, written in what appears to be blood, along with the instructions to show it to five other people. From there, it’s a descent into madness and terror for Isabella and the others.

While there are some extremely well-timed jump scares peppered throughout the game, if you’re looking to be outright scared, you’ll probably be a little disappointed. The Letter is much more of a slow burn, in the best of ways. The atmosphere slowly shifts, and the feeling of creeping helplessness grows and grows as you progress through each character’s chapter. The writing really is quite good, and the level of character development is incredible. You really get a feel for their insecurities, their hopes, their dreams, all of it. And the game doesn’t shy away from difficult topics, such as familial obligations, race/racism, sexuality, self harm, and more. This definitely isn’t a game for the faint of heart. 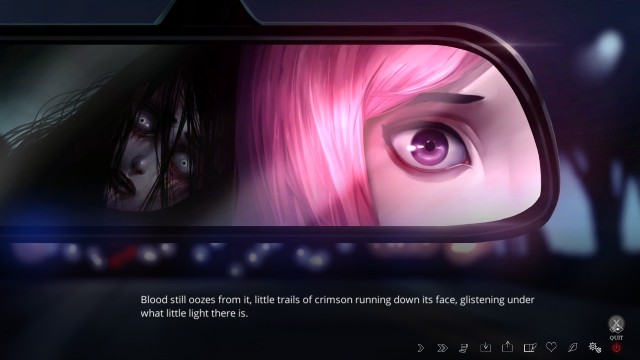 Gameplay is very straightforward – The Letter is, essentially, a playable book. You progress through each character’s chapter by simply advancing through their dialogue. Now and then, however, you will be presented with a quick time event. They can be surprisingly difficult, though there’s also an option to disable or simply skip them if you’re having too much trouble. You also have access to a journal that will automatically add entries in chronological order, which can be helpful when viewing events from different characters’ perspectives. There are also branching storylines based on the choices you make, largely based on your relationship with other characters. It’s an interesting mechanic, and means that you’ll need to play through multiple times to get the whole picture.

Aesthetically, the game looks pretty good. The character portraits breathe, have small movements, and even shift their pose and expression as appropriate. While the still art definitely looks better than the character portraits, overall, it was a very solid effort. The sound effects were absolutely spot on as well. The soundtrack is great – I even found myself humming along with some of the tunes, they were so catchy. I also highly recommend wearing some decent headphones while playing, as the creepy whispers that drift in through the background, and the ominous noises that creep up on you are part of the overall experience. 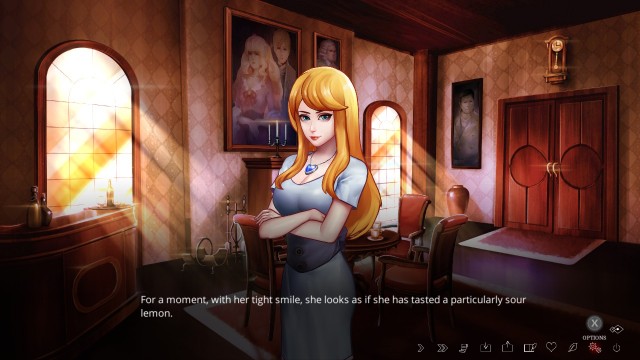 Unfortunately, The Letter has one glaring flaw that I just couldn’t overlook, and trust me, I tried. The grammar mistakes are simply far, far too numerous. Weird comma splices, frequently using the wrong tense (and even switching tenses mid-sentence), missing words, and even sometimes just the entirely wrong word altogether keep the experience from being as immersive as it could be. Normally I can be fairly forgiving on a few grammar mistakes here and there (English is a hard language, I’m sure some of my readers right now could point to a dozen mistakes in this article!), but in a visual novel, that’s the bulk of the game.

Falls Short of Being Truly Spooktacaular

As a whole, The Letter is an awesome visual novel. With a literal ton of dialogue, extremely well-developed characters, a deliciously creepy, slow-burning story, branching story paths, and an interesting relationship system, there’s quite a lot for horror fans and visual novel fans alike to enjoy. Unfortunately, the awesome story and stellar character writing is bogged down by the ceaseless grammar mistakes. Still, if you can get past it, I think you’ll thoroughly enjoy it. 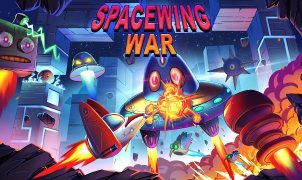 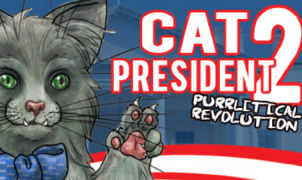