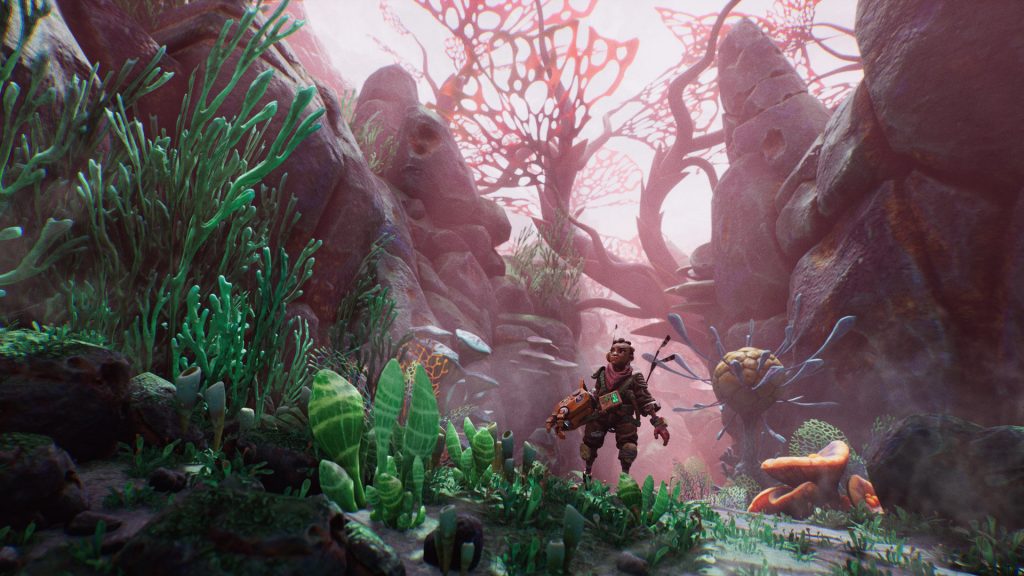 Game Pass is changing the way the gaming industry works in a million ways, large and small. A game like The Gunk, though, makes me wonder how much it’s starting to impact development. The Gunk is the prototypical “perfect for Game Pass” game. While I’d have a hard time recommending players spend any significant amount of money on it, I think Game Pass subscribers should absolutely give it a try. 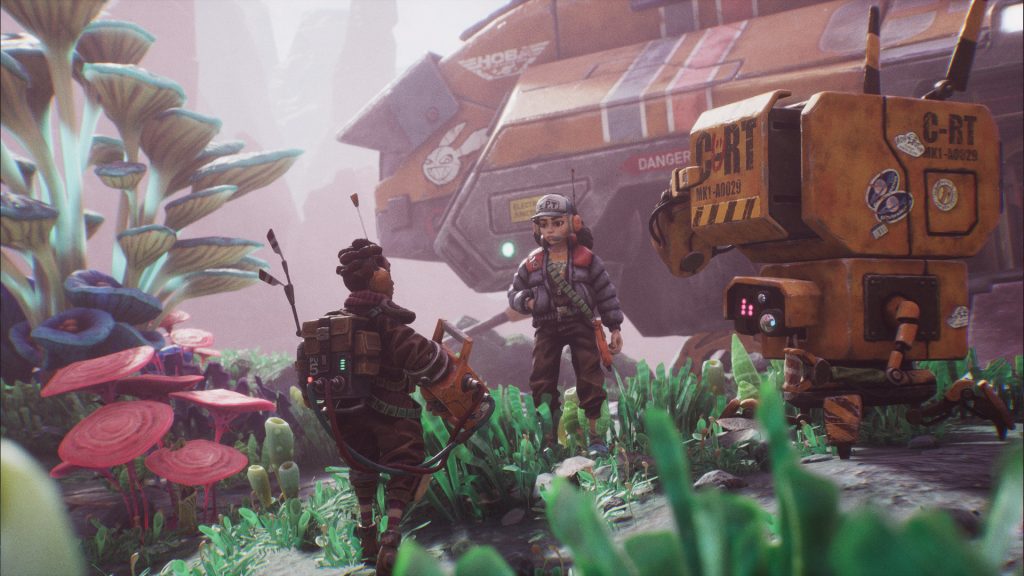 You play as Rani, one half of a space-traveling duo who likes to stop on uncharted planets in search of resources that could help turn their tough lives around. Broke and struggling to get by, they seem to have found the right world when their latest stop is filled with energy they can potentially take with them. Unfortunately, it’s also filled with weird gunk, which seethes and swarms everywhere.

The relationship between Rani and her partner Becks sits at the core of The Gunk. Becks is constantly in your ear, providing helpful feedback, translating lines on alien statues hinting at a society that once occupied this planet but seems to be gone. While Rani’s enthusiasm to explore an unknown world is addicting, Becks seems immune. She’s seen where Rani’s enthusiasm can take them, something which is evident from looking at her missing arm. Becks sits back at the ship, keeping things working and building a camp you can safely return to. She’s definitely your cheerleader much of the time, but she’s also weary and quick to pump the breaks.

Having two strong-willed women working together and pushing back against each other is definitely welcome as you explore, but I was bothered by The Gunk’s refusal to define their relationship. While keeping things casual in deep space might make sense, my early thoughts that they might be sisters quickly felt wrong. Close friends could work, but as The Gunk goes on, they feel more and more like a couple. A few lines seem to hint at this deeper level to their relationship, things they say, and the way they talk, which really aren’t how most friends talk. By the end of the game, I definitely felt they were a couple, but if that’s the case, I really would have appreciated the developers actually saying so. Rani and Becks are delightful, but I’m tired of representation so often having to be in people’s heads and the refusal by so many creators to put it on the screen.

Not That Power Glove 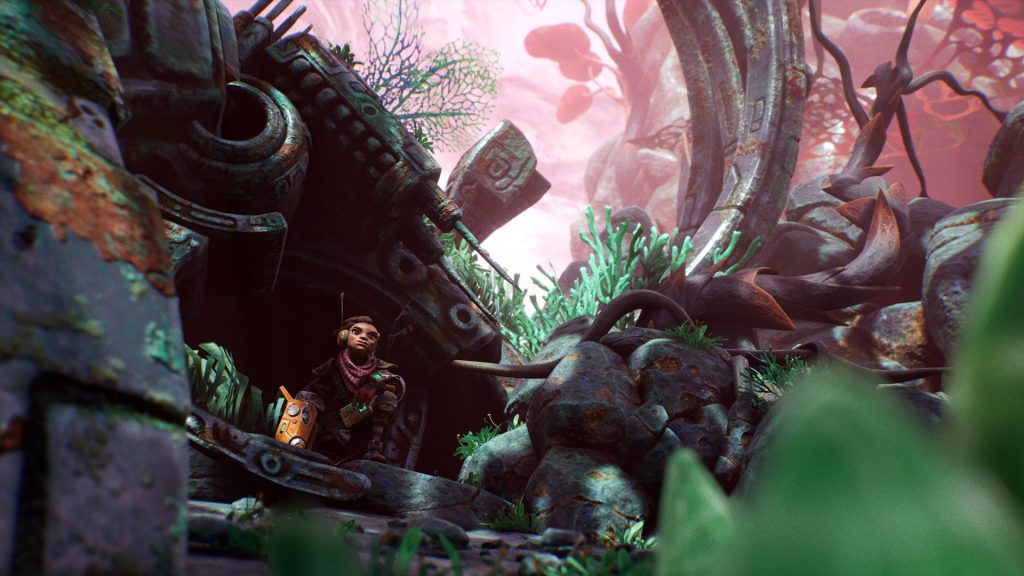 On this planet, perhaps Rani’s lost arm is a good thing. She’s replaced it with a power glove which she’s named Pumpkin and which she enjoys talking to. Perhaps not the healthiest behavior, but definitely useful when you’re on a planet filled with gunk. You suck gunk up in a way that feels like Luigi with his vacuum. Over time you’ll unlock a wide variety of upgrades that allow you to set lures, suck gunk faster, shoot lasers, and far more.

Few of these upgrades feel necessary. Whether you’ll even get them can vary. You gather resources throughout the environment to build upgrades and use a scanner to analyze everything around you to unlock the ability to build them. If you don’t do a lot of either, you may never get a lot of the game’s upgrades. You’ll still likely be able to make your way through. 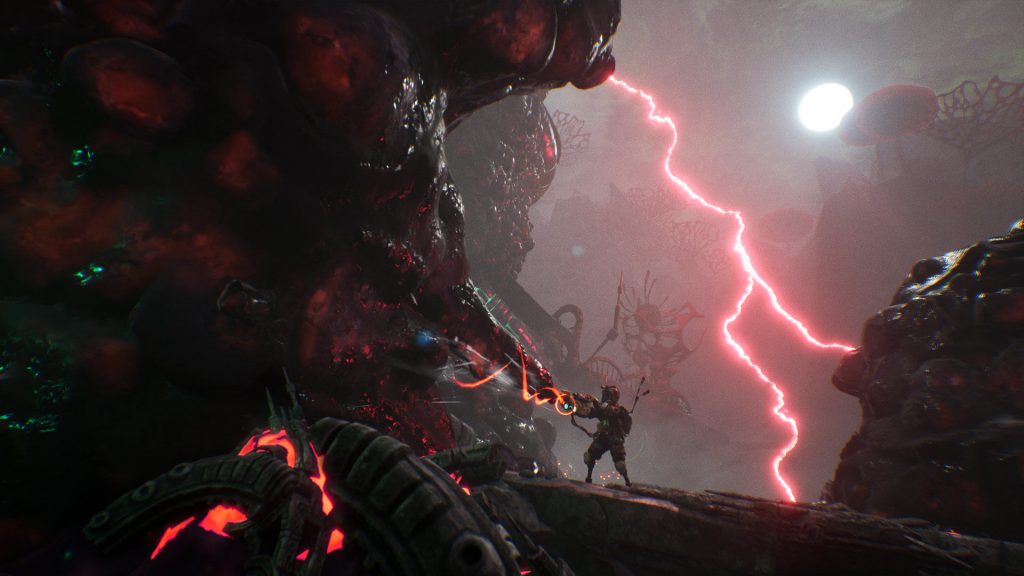 That’s because The Gunk stays a simple, relatively easy experience for the entirety of its five hours or so. This is a short game, and after the opening hour or so, you’ll have seen most of what it has to offer. Exploring a striking world which can quickly turn between beautiful and disgusting is a relatively calm experience, one far more focused on the exploration than any sort of combat.

You’ll meet a few types of foe throughout your journey but only a few. None of these are difficult to take on. Regular enemies just rush you and need to be sucked up and shot out. A later type of foe shoots energy at you, but you can catch it and shoot it back. These guys can be annoying, especially when you’re in a room with a few of them at once, but you have enough life that you’ll rarely die, and even if you do, you don’t go back far as checkpoints are frequent. Even falling off a ledge just has you take a bit of damage and pops you back into the world.

Puzzles likewise stay simple. Using improvised explosives to clear a path and energy balls to grow plants you can climb make up 90% of them. A few moving platforms eventually come into play, but this is the level of simple that even young kids should be able to handle.

The most difficult sections are late in the game, and rather than making you think or use your skills in interesting ways, they mostly just dump you into tight areas that make timing harder. Rani eventually gets such a nice assortment of abilities that I would have loved to actually have to think about how I was using them more.

Are You Sure This Isn’t A Time Loop? 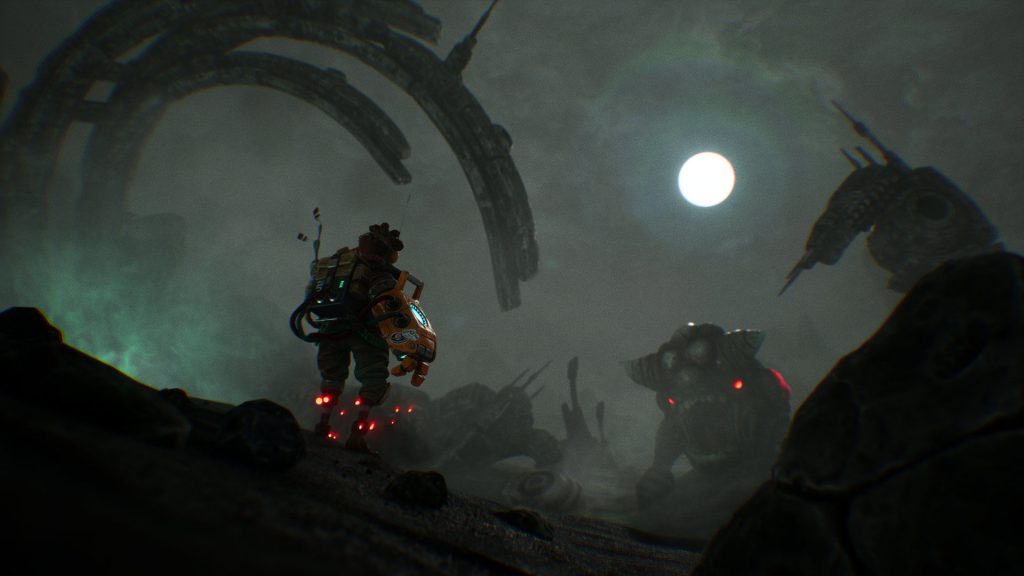 In a year filled with time loop games, perhaps The Gunk is a secret addition to that canon. No, you’re not actually stuck in a time loop, but you sure do the same things over and over. Enter an area. Suck up gunk. Find an energy ball and grow some plants. Perhaps take out a couple of the very few enemy types. Rinse and repeat for a few hours until the game is over. Even boss fights just recycle the same mechanics you’ve been using the entire time.

The good news is that those mechanics are genuinely fun. I liked sucking up gunk, at times wanting more of it, if anything. Cleaning this beautiful world is hypnotic in a way, reminding me of some of what I enjoy about a game like House Flipper. I could do it for hours, which is good, because it’s most of what I did for hours.

Ultimately it’s hard to give The Gunk a strong recommendation. It’s a very old-fashioned game, one that feels like it wouldn’t have truly stood out even in the era it feels like it belongs to. Despite likable characters, the story doesn’t really satisfy either. The core mechanics just plain work, though, and its short length doesn’t overstay its welcome. While it feels like the development team squandered the potential for more, those who can check it out without a significant investment will find a few fun hours. Perfect for Game Pass, indeed.

Full disclosure: This review is based on a retail copy of The Gunk. 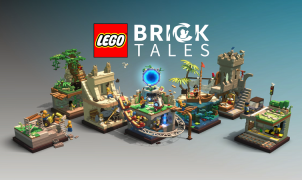