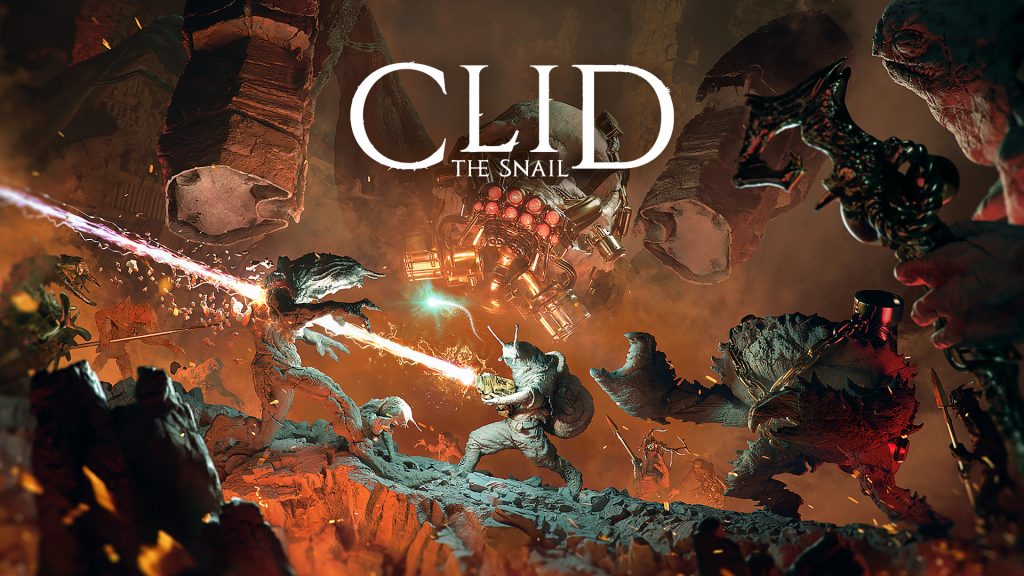 Part of being an indie fan means I’m drawn to games that are strange, unusual, and often original. Games like Clid the Snail. I’d been fascinated by it early on, and lamented I couldn’t tackle it myself. But that all changed when Clid the Snail came to PC. And while HPP previously covered the game on PlayStation, I’m here to tell you how the adventure works on computers. It takes place in a dystopian and often darkly humorous world bursting at the seams with creativity. The question this Clid the Snail review will set out to answer is if this adventure plays any better on PC than it did on PS4.

Everybody Loves a Loner 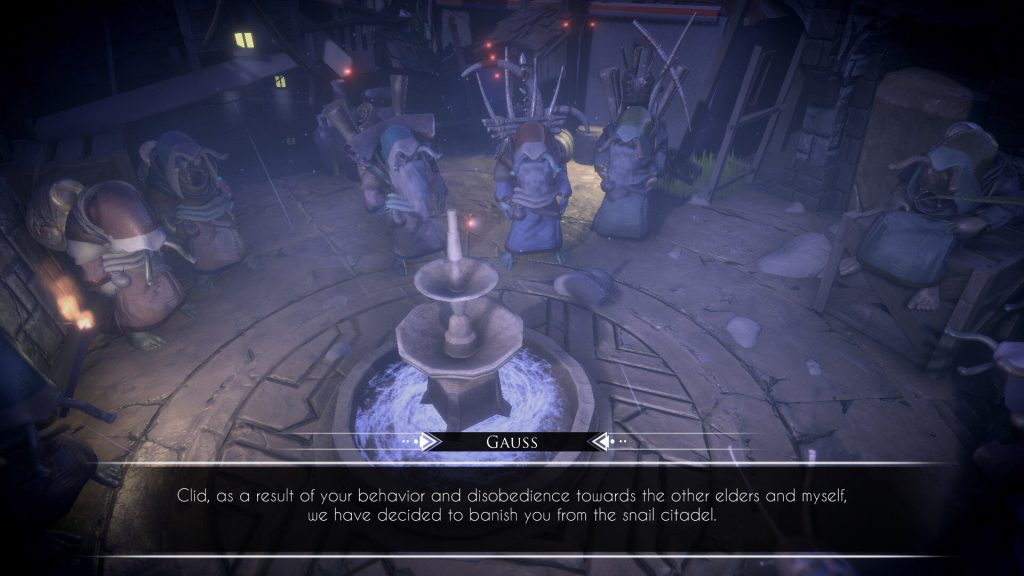 First things first – I love the world of Clid the Snail. It’s melancholy, kissed by darkness, and full of caustic humor. Mostly delivered as snarky one-liners by Clid himself. He’s not exactly a regular snail. Or as regular as a snail can be in a post-apocalyptic world full of mutant animals and insects. Most snails devote themselves to pacifism, staying in their Citadel and enjoying their lives. But not Clid. He’s an inventor, warrior, and a drunk. Nevertheless, he’s determined to protect his fellow slimy citizens from the threat posed by the Slugs. Unfortunately, snail society doesn’t approve of his methods. So even though he spends his days protecting them, he’s quickly cast out due to his violent ways. Which strikes me as short-sighted, but it’s a great starting point for his adventure. 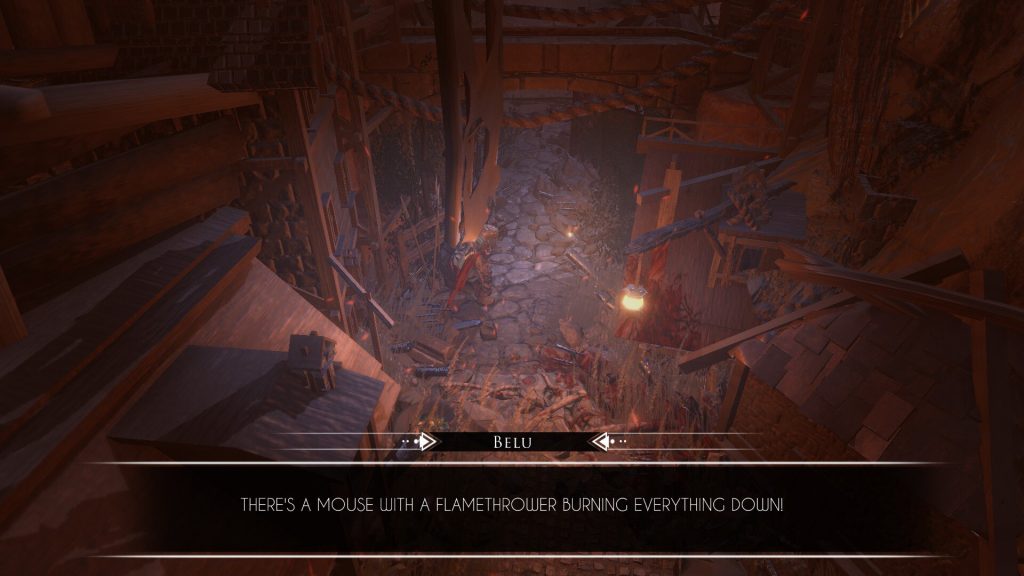 While Clid is a loner, he’s not quite alone. His constant companion is Belu, a tiny firefly. Belu made a promise to Clid long ago, and as such, won’t leave his sight. Think Navi from Legend of Zelda, and you’re on the right track. But thankfully, Belu is nowhere near that annoying. At least to me. Clid finds Belu quite irritating, and they often trade sharp words. If you pay attention to what Belu tells you, however, you’ll learn more about the world itself, and get clues on how to survive it. 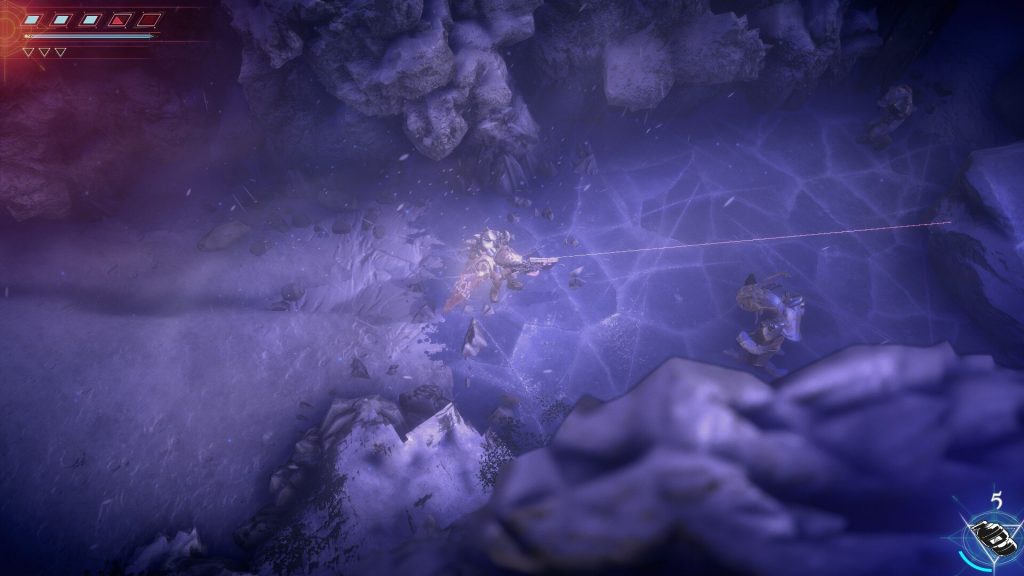 I’m a big fan of twin-stick shooters in general, but a few issues hold Clid the Snail back. As pointed out in the original review, this isn’t a rapid-fire example of the genre. Clid is quite slow and lumbering, which makes sense given the fact snails generally crawl about slowly. And while Clid isn’t as slow as a normal gastropod, he’s not quite fast either. Though Clid has a handy dodge roll, he can only do it a couple of times before needing to recharge his stamina. A lot of combat relies on actively locating threats before they reach you, aiming and carefully firing on them before they get in your face. 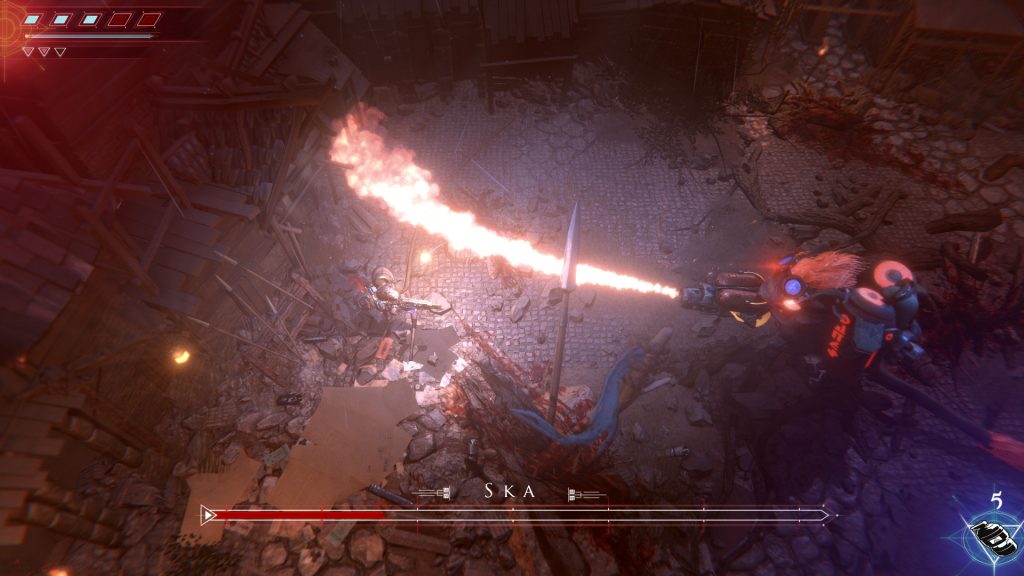 Another thing contributing to the game’s slower pace is that most guns at Clid’s disposal aren’t automatic fire. At least early on. Your primary weapon is a laser blaster. It fires narrow bolts of energy, or you can charge it to unleash an enemy-splattering blast. After defeating the first boss, Ska, you’ll acquire a powerful flamethrower. It fires rapidly, but it also requires ammunition, whereas your blaster has unlimited shots. In fact, most guns in the game require ammunition. You can’t just find it from downed foes, either. You’ll have to make it in one piece to the merchant crab hidden in each stage, and pay crystals to replenish your reserves. This goes double for your grenades, mines, and health packs. You’ll want to be miserly in how you use these finite resources, lest you’re overwhelmed by enemy forces mid-stage. However, you will find several dandelion fields in each level, which both heal you and save your progress. 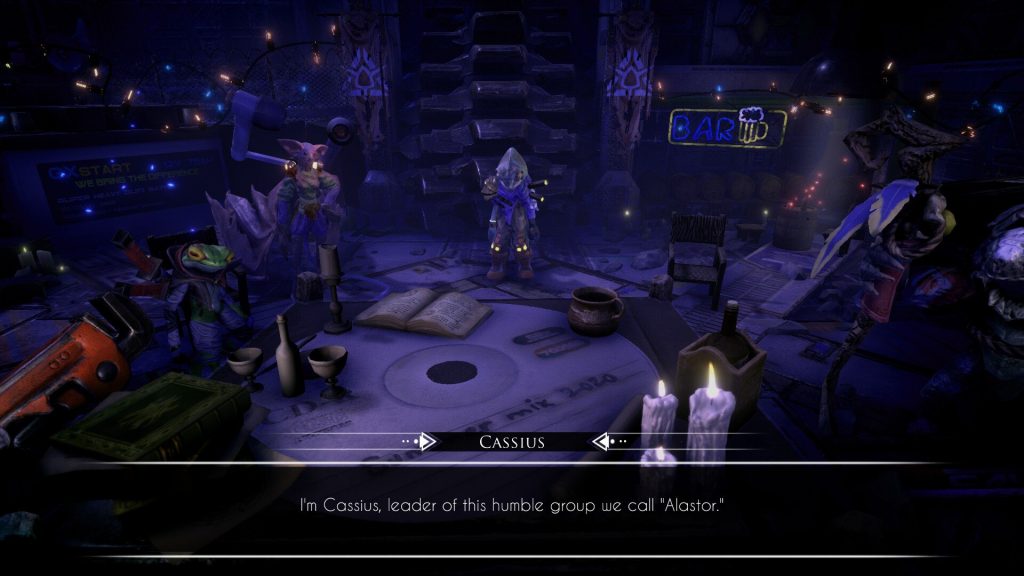 After joining the group of outcasts called Alastor, Clid will go on various missions to protect the Citadels from the Slug menace. It’s clear something sinister is going on, making the Slugs more violent than in the past, as well as enraging other species. Hell, the first boss is a former member of your group who seemingly loses their furry little mind, burning an entire colony of Grasshoppers to ash. The point being, this is a world on the verge of collapse and violent change. Most stages are large and full of well-hidden enemies. Usually Slugs, but not always. You’ll face off against moles, mice, and more, and each type of foe has a different manner of attack. Moles will burst out of the ground and hurl things at you; some Slugs will charge you, others carefully advance shield-first, and some teleport in and fire bursts of magical energy. There’s a ton of variety, and I really appreciate it all. I just agree with Francis, and wish the game relied less on shadowy mist and darkness, which often obstruct oncoming threats. 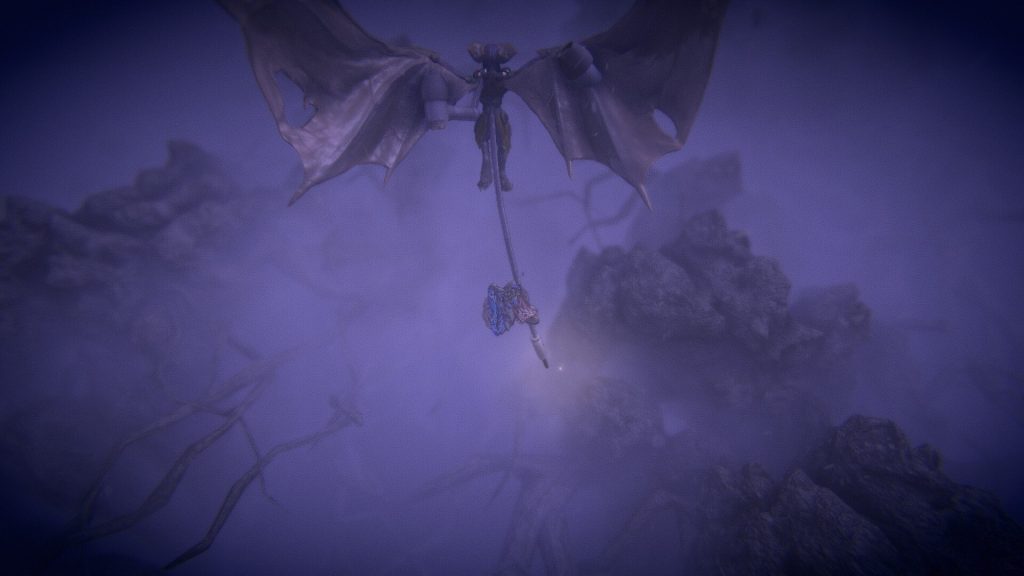 Much as I’m a fan of the boss fights in Clid the Snail, I agree that they’re too few and far between. By contrast, I quickly tired of the battles against Slug lairs. Mostly since they’re battles of attrition, with you defending yourself against waves of violent Slugs, then attacking the lair core, rinse and repeat. I must have died a dozen times during the first lair battle. And while I also lost a handful against the pyromaniac mouse, I felt those deaths were more fair and thus earned. 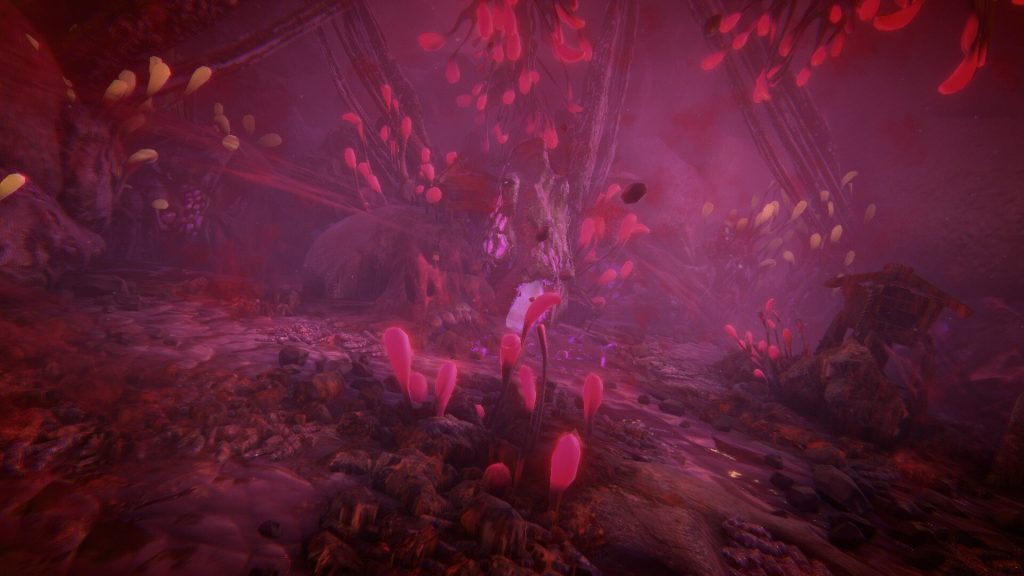 Visually, I feel the game is pretty successful, and showcases a lot of great ideas. In a weird way, it reminds me of Star Wars, with tons of distinct species living in weird ramshackle habitats. That goes double for the way creatures talk in the game, in a discordant gibberish talk with handy subtitles. When I could see the environment clearly, there’s a lot of great details, and interwoven and complex 3D models. I also appreciated the many foes Clid faces, though I feel they could have benefitted from a bit more color. There’s a washed-out nature to the colors used here, and while I think it’s intentional, it’s not always beneficial. Musically, there’s a lot of melancholy rock twang that keep things interesting, and I like how it ramps up significantly during boss battles. Overall, the game features mostly impressive design choices. 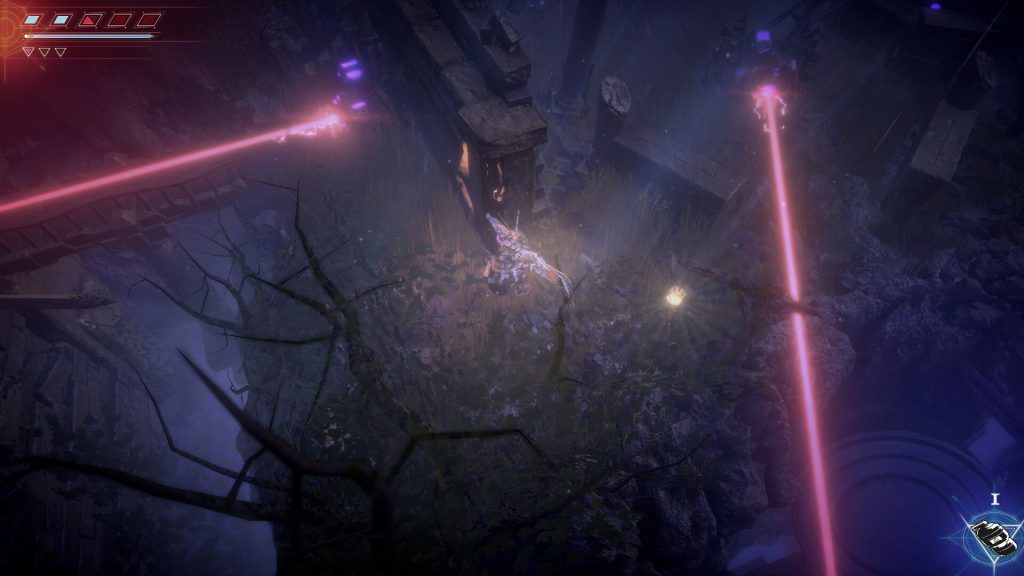 I enjoyed a lot about Clid the Snail, but the following features didn’t impress me. While the previous reviewer enjoyed the puzzles, I felt they broke up the action a bit too much. I don’t mind finding hidden doodads to boost my health meter or unlock new shells, but I quickly tired of all the instant death lasers that guarded them. It was also very easy to miss sneaky paths that led to some such puzzles. And though the action was generally well-paced, I got frustrated when I was ambushed by groups of foes. Those encounters really showed how the game relies overmuch on limited dodge rolls. And again, there’s too much darkness that obscures the path forwards. Though the latter would have been less of an issue if the game featured some form of mini-map.

I’m still glad I got the chance to cover Clid the Snail. It may not have fully lived up to my hype, but it’s still a solid and creative twin-stick adventure. Sure, there are things that Weird Beluga Studio could have done better, but I think the game is still worthwhile. Especially as a first effort. This is a fascinating world, and one I’d be happy to return to in a sequel. But as far as a successful first outing, it was a bit mixed in execution.