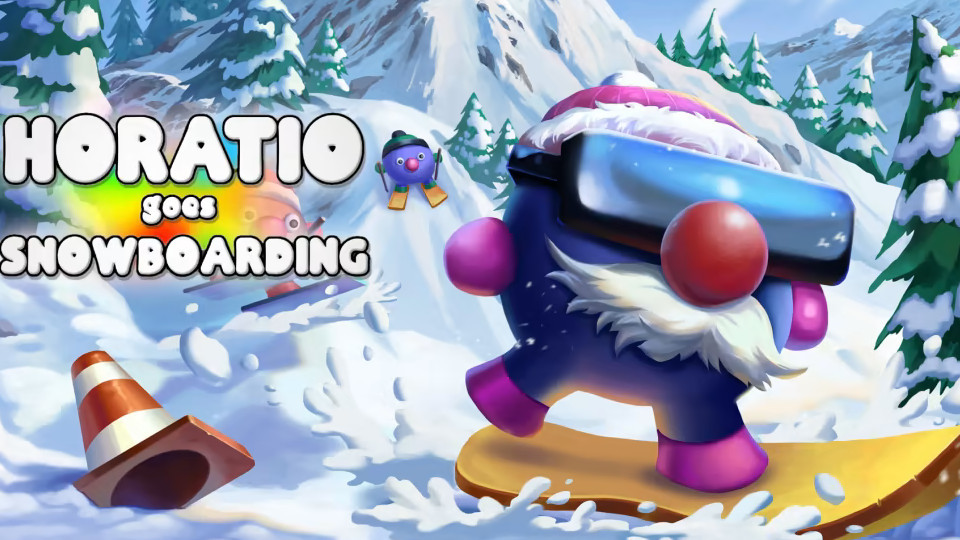 I only found out about Horatio Goes Snowboarding by following the announcements from publisher eastasiasoft. I wasn’t super familiar with the developer, Infinite State Games. All I knew was that Horatio Goes Snowboarding looked simple and fun, and sometimes you just need a palette cleanser like that to balance yourself between more challenging games. After doing some research, I found that the developer has also given us Don’t Die, Mr. Robot! DX, Rogue Aces, and Family Tree. All games that harken back to the arcade-styled fare of an older time of gaming. But since I grew up in that general era, I figured I’d give this one a shot. Keep reading our Horatio Goes Snowboarding review to see if this basic arcade experience is one worth playing. 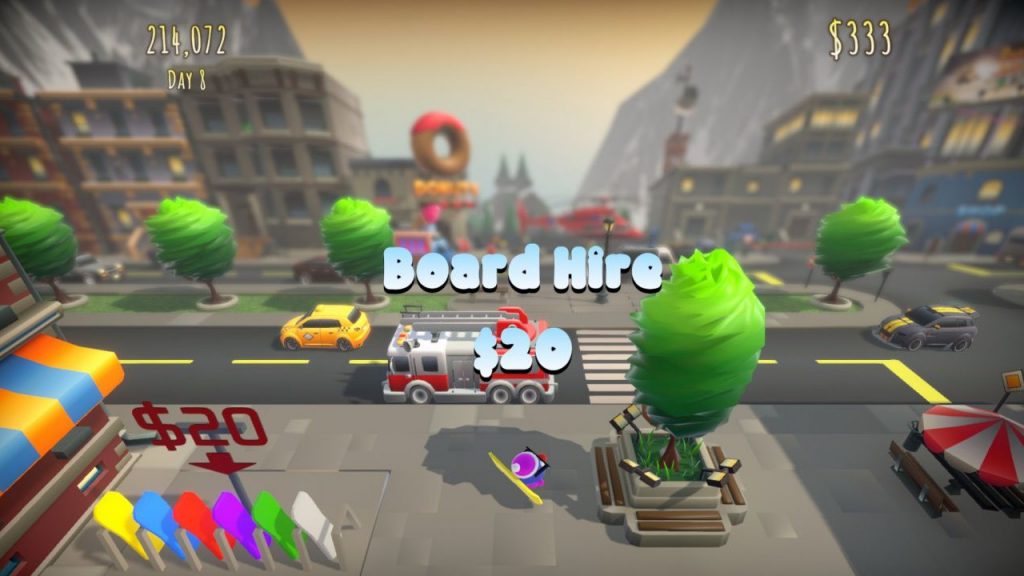 It might sound strange, but a key reason I decided to tackle this review was that the game seemed to have an offbeat sense of humor. Horatio doesn’t just snowboard the entire time, oh no. He has to run across traffic, procure his snowboard and make it to the departing helicopter in one piece. It’s a bit deranged, and cars can and will smash into you, forcing Horatio to pay an exorbitant hospital bill before trying again. It’s a lot like a weird tribute to Frogger, and I appreciate that. The important thing to keep in mind is you start each run with $300, and hospital visits drain $100 from your coffers. Additionally, renting a board costs $20. So if you ever have less than $120 when you wipe out, it’s game over. 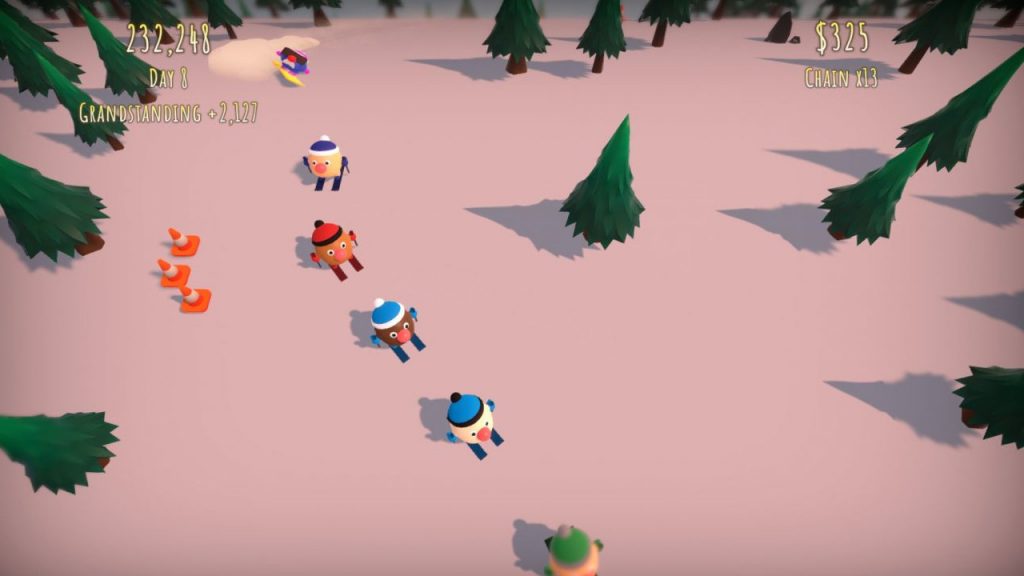 Each in-game day is split into two sections – the aforementioned Frogger tribute and then the snowboarding. Thankfully, by doing well on the slopes, Horatio earns a bit more cash at the end, which provides a bit of a safety cushion as you progress. You also get extra compensation for racing through slalom gates. If you manage to beat the level without missing any, you’ll boost your chain and the ultimate score you get at the end. You can also increase your favor by doing feats like weaving between trees last minute, smashing through ramps, and more besides. Just watch out for the insane yeti, which crashes back and forth before bursting forwards, leaving downed trees and crippled humans in his wake. There are other hazards as well, such as pools of ice, goofy skiers, and plenty of trees.

The Need for Speed 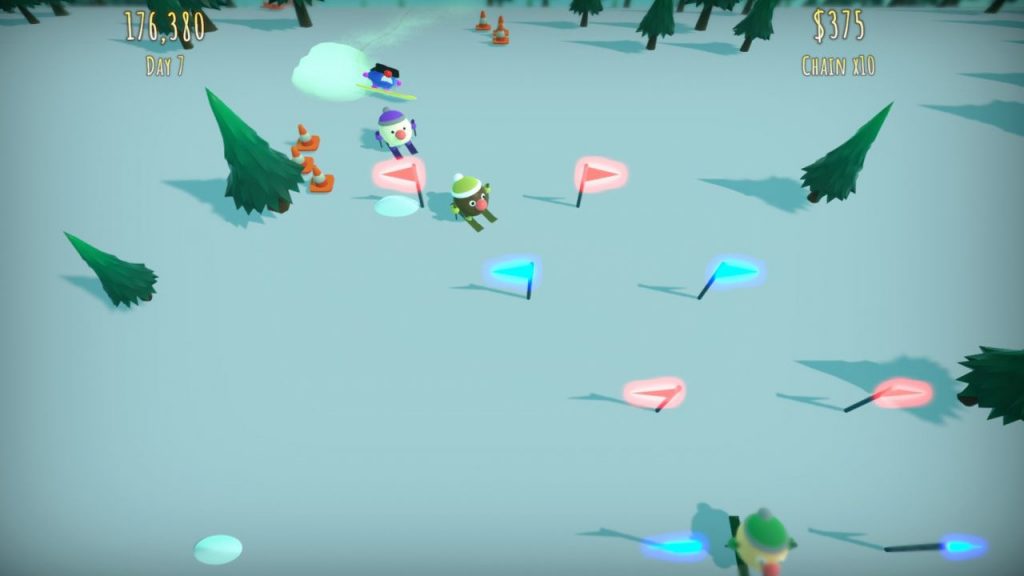 While Horatio Goes Snowboarding doesn’t tout itself as a rogue-like title, it features randomly generated layouts every time you begin a stage. And in general, the farther you get, the more challenging the game becomes. Even in the street crossing sections. All manner of colorful cars will happily turn you into street pizza, and they’ll even have the temerity to honk at you moments before collision. You’ll need to gauge the flow of traffic carefully before having Horatio race across the street. Just remember, you don’t have to cross at the official crossing area, which can really help once the game starts to get mean. 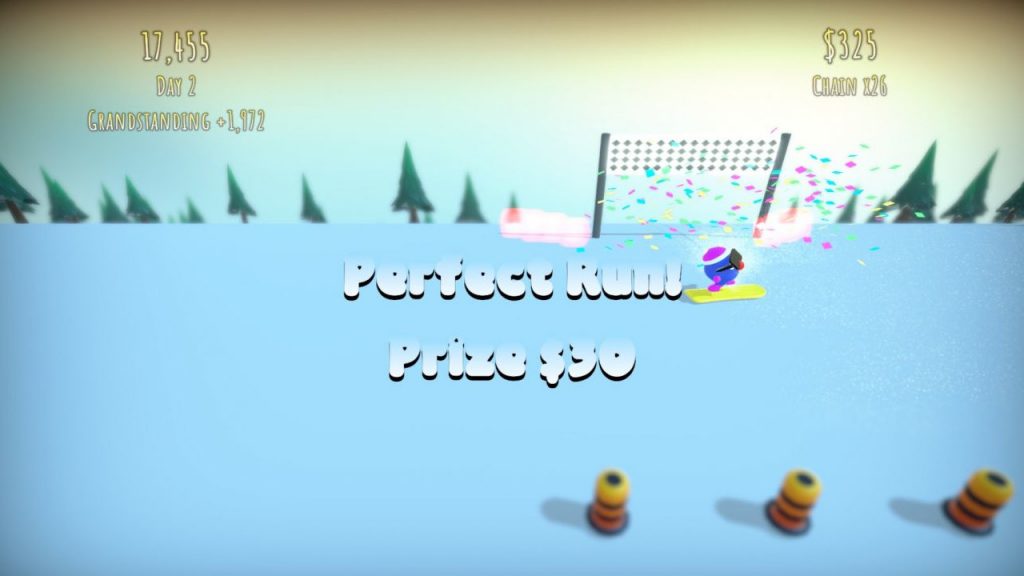 The main goal in the game is to get the best score you can before it’s game over. I believe the best I received was around 150,00 points. You might wonder what points are good for, and the answer is they unlock the Endless mode, which is just pure snowboarding until Horatio wipes out. It’s fun enough, but I did find myself missing the street sections. Just keep in mind, it’ll take a little bit of effort to unlock Endless, since it requires a million points or so before it opens up. I don’t have an exact number, since I didn’t notice the ticker counting down until I was an hour or so into Horatio Goes Snowboarding. 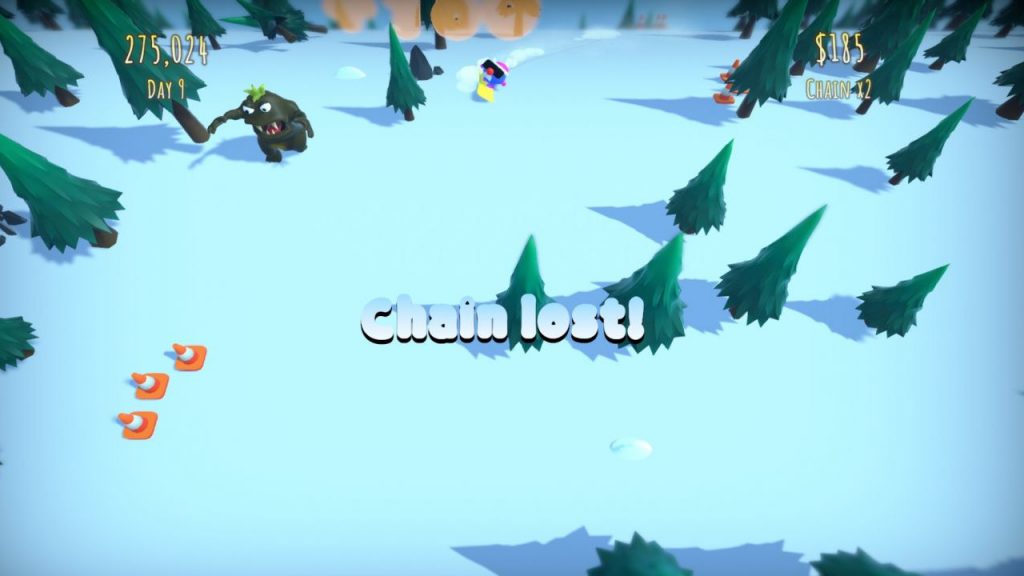 Control-wise, Horatio Goes Snowboarding is simple yet fluid. There’s a distinct slippery sway to how Horatio moves while boarding, and all you can do is move left and right. There’s no braking. So to slow down, the best thing to do is shift back and forth slightly. Also, as the game ramps up, everything gets faster. So you’ll do well to get accustomed to the controls quickly.

View From the Top 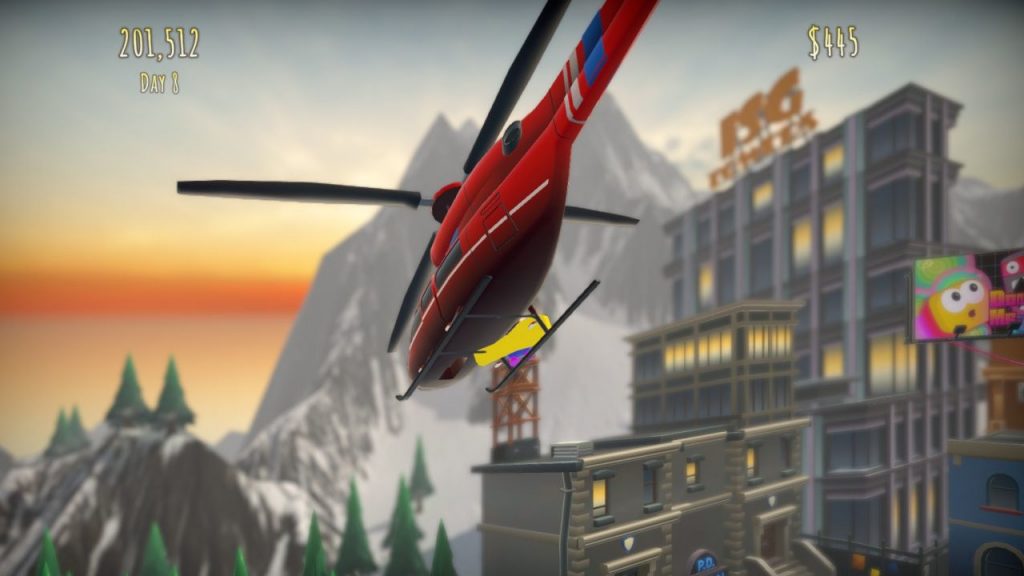 Visually, the game is simplistic yet cute. Horatio is a blobby little humanoid, as are others you’ll find on the slopes. Meanwhile, the yeti is really deranged and creepy looking, and will let loose a trademark yell every time he arrives. I thought the general aesthetic of the game was attractive enough, though I did find myself wishing for more variety the farther I got. There’s a really limited color palette here. I would have appreciated snowboarding at different times of the day, watching the sunrise glow, or glancing up at glowing stars. They could have even found an excuse to throw in an aurora borealis to mix things up. Musically, Horatio Goes Snowboarding is fine. It has two tracks, one for the street sections and one for snowboarding. By far, my favorite audio component is when Horatio lets loose with a corny catchphrase at the start of each snowboard section. While the game won’t astound with its aesthetics, they all do the job of keeping you invested in the simple yet addictive gameplay.

Horatio Goes Snowboarding is undeniably basic, but it’s still generally addictive fun. My main issue with it is I saw the potential for more. While I’m fine with using cash for hospital visits and renting boards, I wish there was an option to spend excess cash on upgrades. Perhaps making Horatio a bit more durable, or enhancing how his board moves. Since the game already features randomized content, I just wish it would have leaned more into that style. Other than that, I had few issues with the game.

Take Me to the Slopes

Ultimately, Horatio Goes Snowboarding is a fun little budget adventure. There’s nothing life-changing here, but it’s still solid and generally pretty enjoyable. My biggest complaint is that the developers weren’t a bit more ambitious, providing gamers a reason to keep playing for even longer. But if you want something simple and cute, that’s reminiscent of games like Woah Dave! and Space Dave!, then you’ll probably enjoy Horatio Goes Snowboarding. 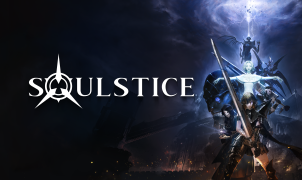