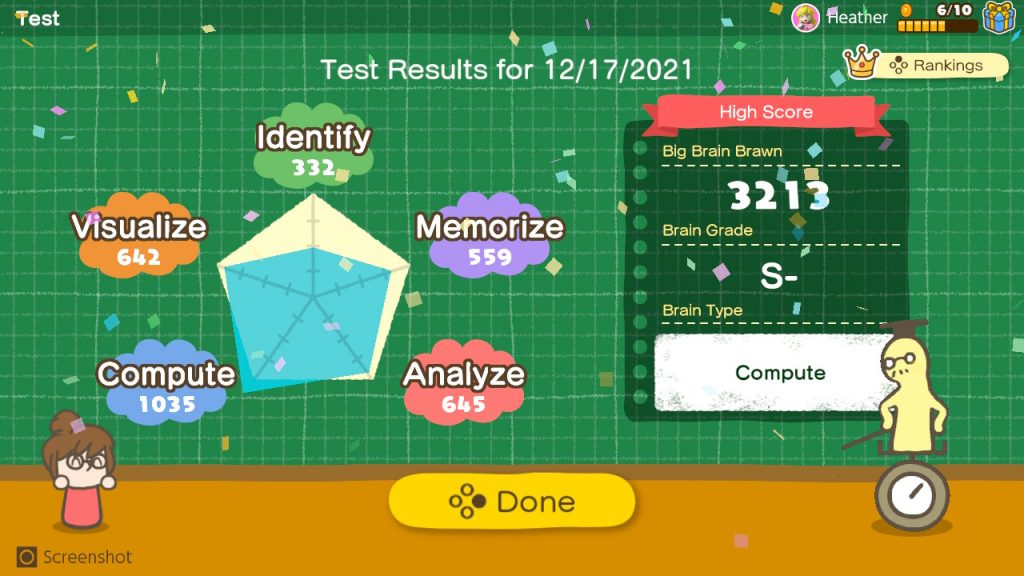 Although studies show that neuroplasticity is retained as we age (in fact, some studies contend that it’s increased but dysregulated due to reduced GABA levels), it doesn’t hurt to work out the brain every once in awhile. For example, my grandma is nearing 88 and is still as sharp as ever — something I personally attribute to her hours upon hours of card games she plays on a daily basis. It was this concern that originally birthed the Big Brain Academy back in the DS era, providing players with plenty of little puzzles aimed at flexing and refreshing those brain wrinkles. Now, after 14 long years, the series makes an appearance on the Switch with Big Brain Academy: Brain vs. Brain, a brain-pleasing party game that will, quite literally, test you.

Big Brain Academy: Brain vs. Brain is simple to set up — the game will ask your name, age, occupation, and give you an avatar to customize. Don’t worry if it’s looking a little plain at the beginning, as you can earn different clothing, hair, and accessory options through gameplay by trading in earned coins for items. After that, players are let loose to put their brains to the test — again, quite literally. 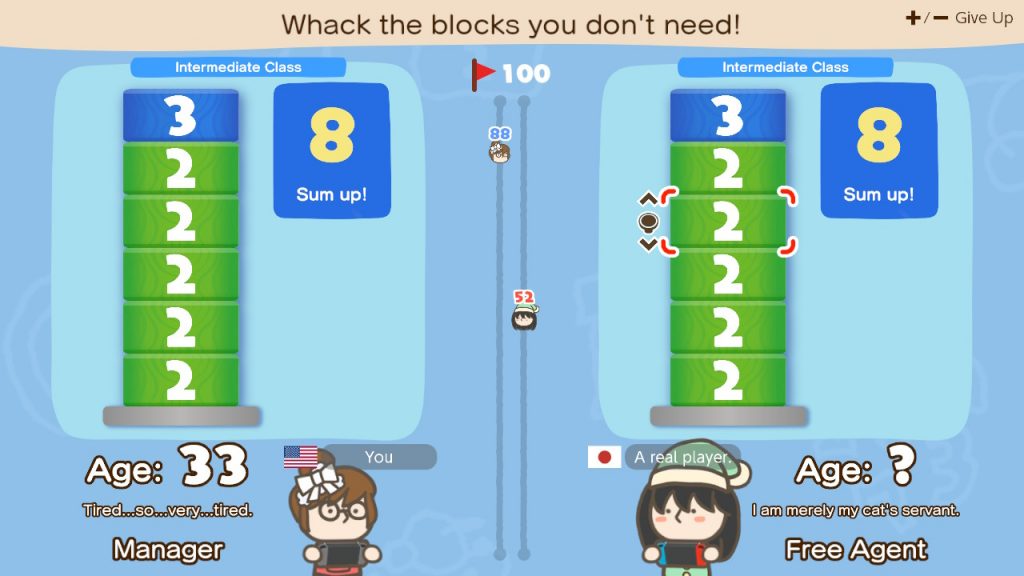 First up, Big Brain Academy: Brain vs. Brain suggests starting off in the practice rounds, featuring 20 different mini-games spread across five categories. There’s Identify, which wants players to correctly match or otherwise pick the correct picture, an example being Fast Focus which slowly reveals an image that a player should try to guess as quickly as possible. Then there’s Memorize, which asks players to remember numbers or objects onscreen; my favorite is the Flash Memory, which briefly shows a series of numbers that players must quickly input in the correct order.

Analyze commands players to take in all information and sort accordingly, with games like Speed Sorting presenting players with several photos and asking them to place them in a specific order, such as biggest to smallest. Visualize is a fun one, activities relying heavily on sight and perception; I greatly enjoyed the Shadow Shift mini-game, which asks players to identify which items are onscreen by their shadow alone. Finally, my favorite — Compute, which is predominately math-based. I loved Balloon Burst best, which asks players to pop balloons in order of least to greatest (or vice versa). All games will ask you to act quickly, as the timer has started, and there’s only 60 seconds on the clock. How will your brain fare against these teasers? 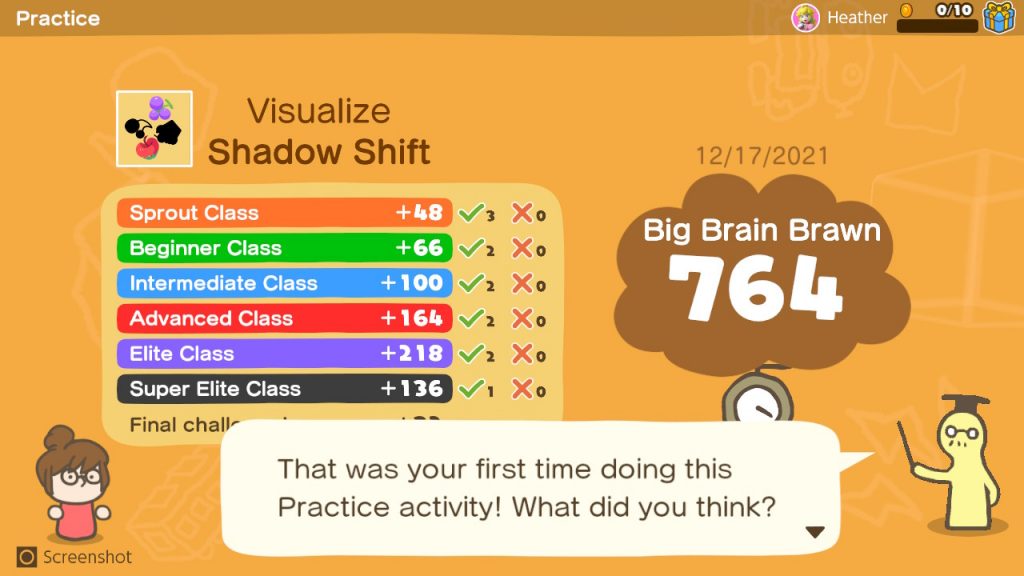 After a few practice rounds, Big Brain Academy: Brain vs. Brain encourages players to make it official by taking a test to formally figure out where they stand overall. The test consists of five mini-games back to back, one chosen at random from each category. Again, the puzzles are limited to 60 seconds each, with a brief pause in between to let players have an ever so slight breather. After all five games are completed, players will have their scores from all five games added up to one big number, with 1500 being a typical first-time score without any practice and 3300 apparently being our brainiac host’s number. How high can you go?

Where Big Brain Academy: Brain vs. Brain really shines is in its multiplayer mode — aptly named Ghost Clash — with several options on offer. Brain battling seems fun enough on its own, but what makes Big Brain Academy: Brain vs. Brain special is that you’re not obligated to wait for real time match-ups; instead, players are pit against the Ghost times of others, meaning everyone can play on their own schedule without waiting for others to connect. Players can choose from fighting friends’ Ghosts, family’s Ghosts, searching by Ghost ID, or taking on the world, one random Ghost at a time. Each win awards players with points, boosting your ranking against players all over the world. Rankings reset every month, so if you’re not on your A game at first, there’s always next month to crush your brain enemies (brenemies?). 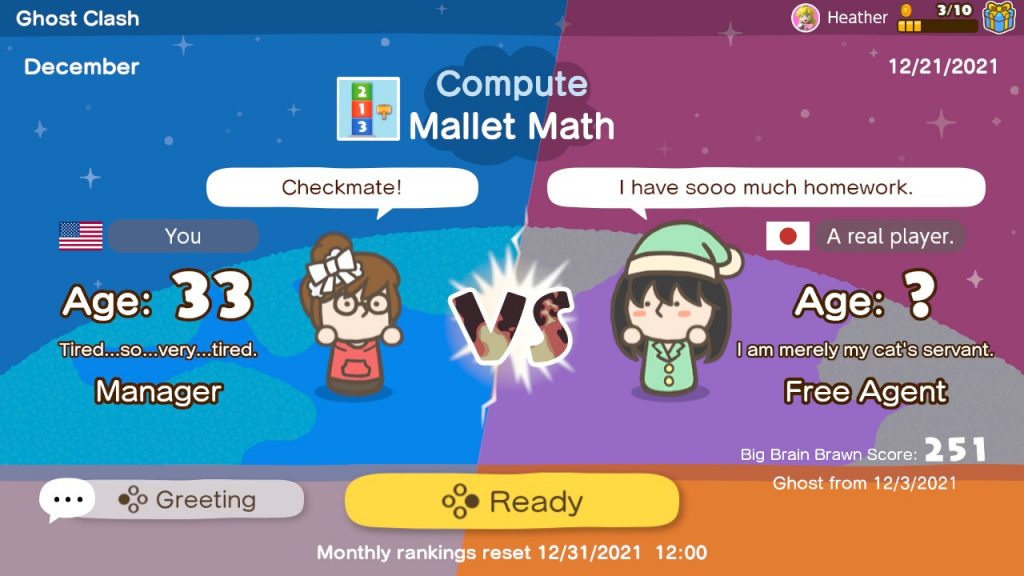 I thoroughly enjoyed my time with Big Brain Academy: Brain vs. Brain, but I tend to gravitate towards anything that includes “brain teaser” as a marketing pitch so take that for what you will. If you fell in love with the earlier installments to the surprisingly slim series, you’ll get exactly what you’re used to here with an added bonus of being able to use the Switch as a touch screen (Joycon drift has no power here!). As for everyone else, it’s worth mentioning that Big Brain Academy: Brain vs. Brain doesn’t offer a ton of new material (save for its multiplayer mode). Oh sure, some of those mini-games are a lot of fun, but keep in mind there are exactly 20 of them total, and considering the love this franchise has historically received (little), I can’t say for certain we’ll see any new puzzles as DLC.

Editor’s note: This review is based on a retail copy of Big Brain Academy: Brain vs. Brain purchased by the reviewer. 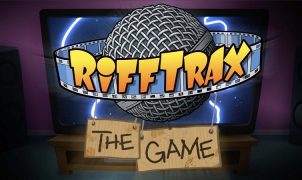 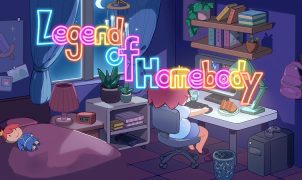 Legend of Homebody AKA Quarantine Simulator Despite the advice that tends to flow freely from the mouths of our elders, the 9 – 5 grind is simply not for…