Uh oh, First Class Trouble! Book us a ticket on the next space shuttle! 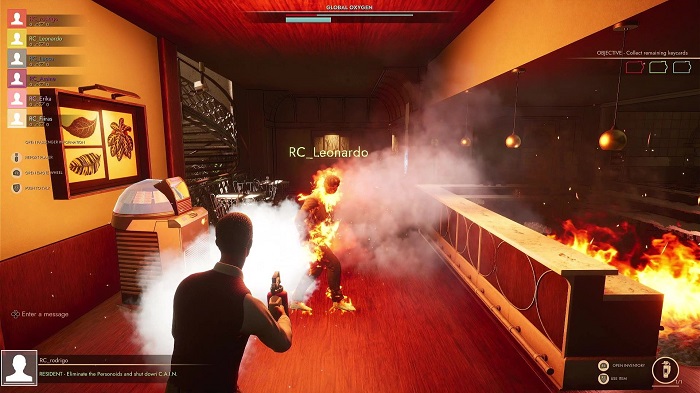 Welcome aboard the ISS Alithea, where there’s nothing sinister afoot happening at all! No siree, not in our luxury suites with floor to ceiling windows where you can gaze out into the cosmos — a sight that would make our Earthbound ancestors weep. Fancy a drink? We have a fully stocked open bar for all your bougie, boozey needs! Taking the entire bottle of champagne I see, very nice — may come in handy when you need to protect yourself from a personoid disguised as one of your fellow cabinmates… unless you’re a personoid, in which case you’d likely use it to bludgeon us all in an effort to save the AI. But you wouldn’t do that, right? Now, let’s take this tour to the pool, where… what’s that look on your face? Why are we hugging? No, don’t kill me! I-

At first pass, the comparisons between Among Us and First Class Trouble are warranted. Both part of an increasingly popular genre often referred to as “werewolf” or “social deduction,” and both take place on a spaceship. But Invisible Walls and Versus differentiated themselves from the giant in the genre in many aspects — positive and negative — that will make some players instantly purchase while forcing others to pass over the title. But for only $14.99 on PC and PlayStation (not to mention it was free during its launch month for PS Plus subscribers), the party game where you gruesomely murder your fancy friends is surely worth a second glance, right? 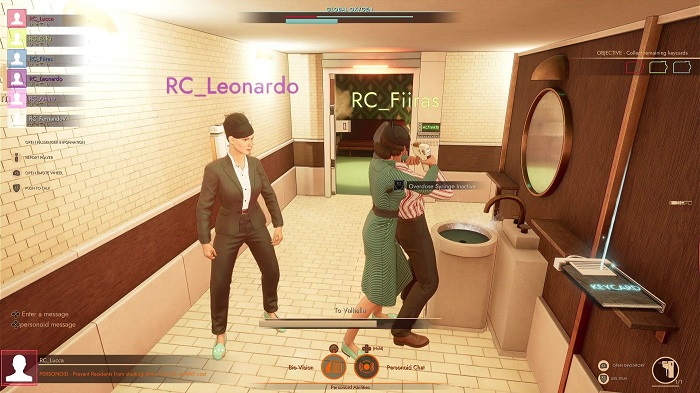 First Class Trouble opens up with a little backstory — you’re either a resident on the ISS Alithea who must work with three other residents to shut down the Central Artificial Intelligence Network, also known as CAIN, before it takes over the ship with its duo of loyal personoids, or you’re one of the said personoids who must quickly kill off the residents before they vote you off the ship. The residents must work together to find keycards to open up area after area to work their way to CAIN, while the personoids must sabotage their shutdown attempts by any means possible.

And when I say “by any means possible” I am quite serious. There are a vast number of ways in which you can kill off the residents, from setting them on fire to dropping a chandelier on them. Want to team up with someone else? One person can come up from behind and hold them still while another merely walks up and snaps their neck, or maybe the two of you can open up a walk-in freezer and lure someone inside before shutting the door on their icy grave. The choices are seemingly endless — will you wake up and choose murder today? 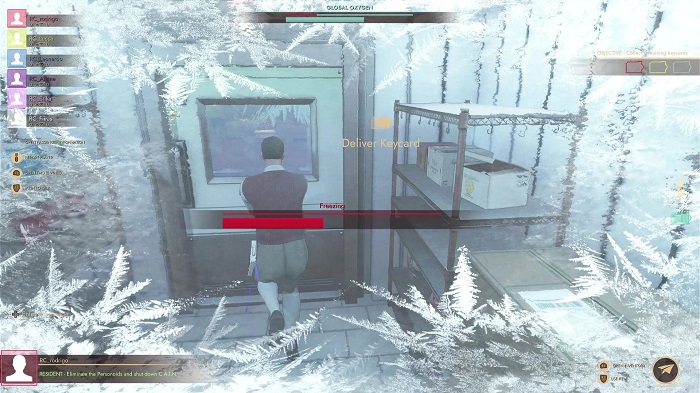 First Class Trouble offers quite a few cool features that will definitely attract players: for one, there’s proximity chat, meaning when you mic up (and you should mic up), you’ll only be able to hear people close by. If you get killed on the first floor while everyone else is on the second? Well… you know what they say — in space, no one can hear you scream (bloody murder). Additionally, I do love that the game attempts a semblance of realism, and the lux art deco style is overwhelmingly cool. One thing I particularly enjoyed is that, when you die, you turn into what amounts to a roomba with a jetpack, allowing you to take advantage of a race course to vroom the day away instead of worrying about keycards and AIs and tasks and all that. Who wants to work after death? Not me!

Unfortunately, there are a number of negatives that I highly, highly recommend taking into account before pulling the trigger (pun intended). For one, First Class Trouble is best enjoyed with two key components: a mic and friends. First, if you don’t have a mic, you might have a bad time, as plenty of the tasks require teamwork (and therefore communication) to get the job done. There is a text option, but boy does it slow the game down and some are inclined to get frustrated with your lack of a mic, so just keep it in mind. Second, if you don’t have friends who want to play the game with you, I implore you to join the Discord server, where you’ll find a dedicated community who love the game and want to see it succeed — meaning they’re more likely to play nice with you. 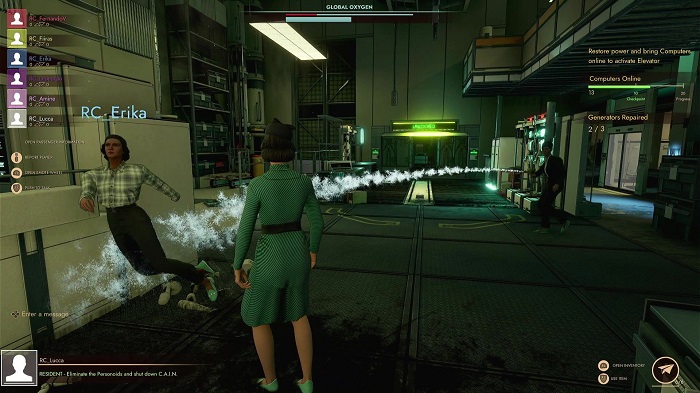 It might seem odd to say people need to play nice in a game all about murdering each other, but First Class Trouble has some… issues. If you’re new to the game or are a woman, be prepared to just get killed a lot. It’s a mixed bag, certainly, but some players will mistake your utter lack of experience with the game as suspicious behavior, making you an easy target. This could be amended with a single player mode (I know I poured a dozen hours into CS:GO’s before playing with others), but alas — the most we get in terms of a solo campaign or even a tutorial are mere written instructions. If you’re new but committed to First Class Trouble, please watch some videos of others playing before diving in.

Unfortunately, I made the egregious errors of being a woman, new to the game, and jumping into random lobbies — a triple threat, really. The first round went fine, but I suspect it was because I didn’t speak French so I had no idea what my French-speaking group was saying. Changing the language settings to my native language of English was a simple click of the button, so I went into a lobby expecting to experience both banter and bullying, but I was instead consistently killed by others before they moved onto the normal tasks. This happened time and time again to the point where it really did appear to be “Step one: kill the woman. Step two: play game,” and there are enough Steam reviews that tell me I’m not the only one who felt that way. I get this game was about murder so good job and all when I was a resident, but even when I was the personoid, the other personoid would come up and kill their so-called “team member,” which doesn’t make a ton of sense to me. 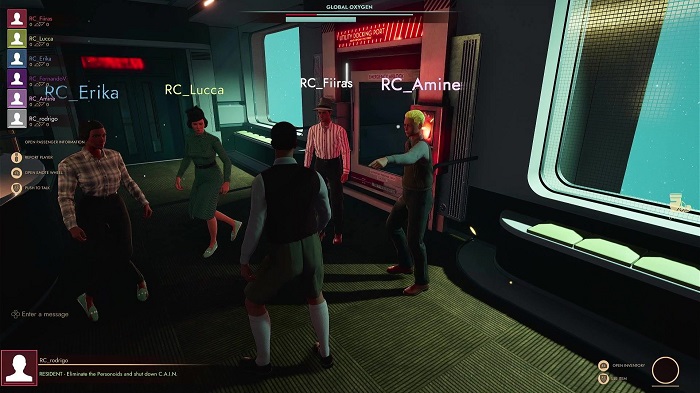 I’m not offended or mad per se — after all, this game was given to us by the publisher so all I lost was an evening, and time waits for no reviewer so I have many games to play next — but I am curious: what does anyone get out of killing their teammate? It seems counter-intuitive to me, but perhaps I would understand it better if I could properly experience a full round. I feel I must say I know how to differentiate being killed off as part of the game and being killed off for arbitrary reasons, and this didn’t feel like the former. Let me know in the comments what compels people to chase away another player. I want to learn. Make it make sense.

Any qualms aside, First Class Trouble is a fantastic way to spend an evening with friends, who’ll later regale stories about how they threw your charred corpse into a pool after it was set ablaze in an act of godly impostoring. There is so much to explore aboard the ISS Alithea, so, if given the option to do so, take a round or to and just breathe in that glorious opulence. While Among Us and Gnosia may have nailed the actual social deduction mechanics down better, First Class Trouble is, at least, extremely memorable in its murderous possibilities.

First Class Trouble is a luxurious excursion through space that throngs of players are just dying to experience (pun absolutely intended). With dozens of ways to kill your friends (and maybe even your friendships), First Class Trouble will offer that addicting “one more round” type gameplay fans of multiplayer games typically adore. Just make sure you have a mic and a group of friends before playing, as silently joining random lobbies is not the best way to travel. Once the dev team works out the cross-play and community kinks, First Class Trouble will be worth the price of admission.

Editor’s note: This review is based on a retail copy of First Class Trouble provided by the developer. 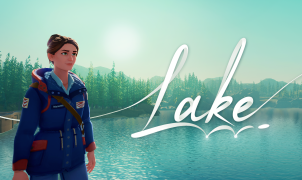 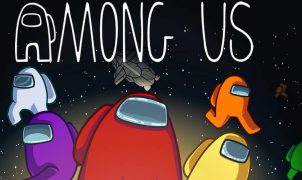 Come get some When Bulletstorm was first released to consoles and PC back in 2011, I passed it up. After glancing over the screenshots, I wrote it off as…