Stalking In A Winter Wonderland 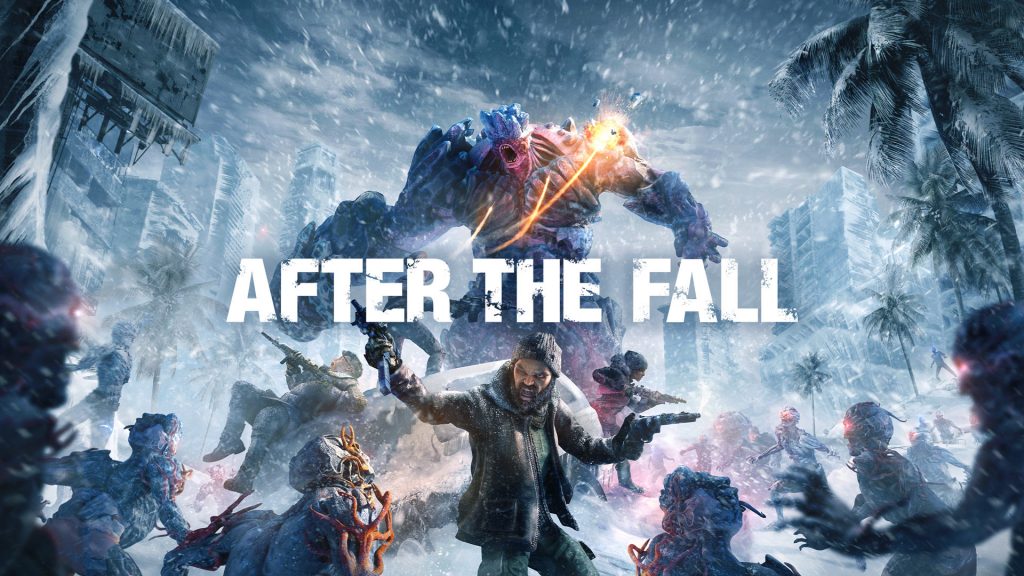 Developed by Vertigo Games, After The Fall is probably best described as Left 4 Dead: VR Edition. It’s a co-op shooter that pits up to four players against droves of ravenous undead. With unscripted encounters that vary from session to session, safe houses generously scattered throughout its linear levels, and a familiar cast of super zombies, the comparisons to Valve and Turtle Rock Studios’ popular FPS series are unavoidable. However, you won’t hear me complaining. After all, Left 4 Dead remains one of the most enjoyable co-op experiences available. So combining that game’s rock-solid foundation with the added immersion of virtual reality feels like (much to the chagrin of the ghouls within) a no-brainer. But does this blood-soaked love letter to Left 4 Dead do enough to warrant a purchase? 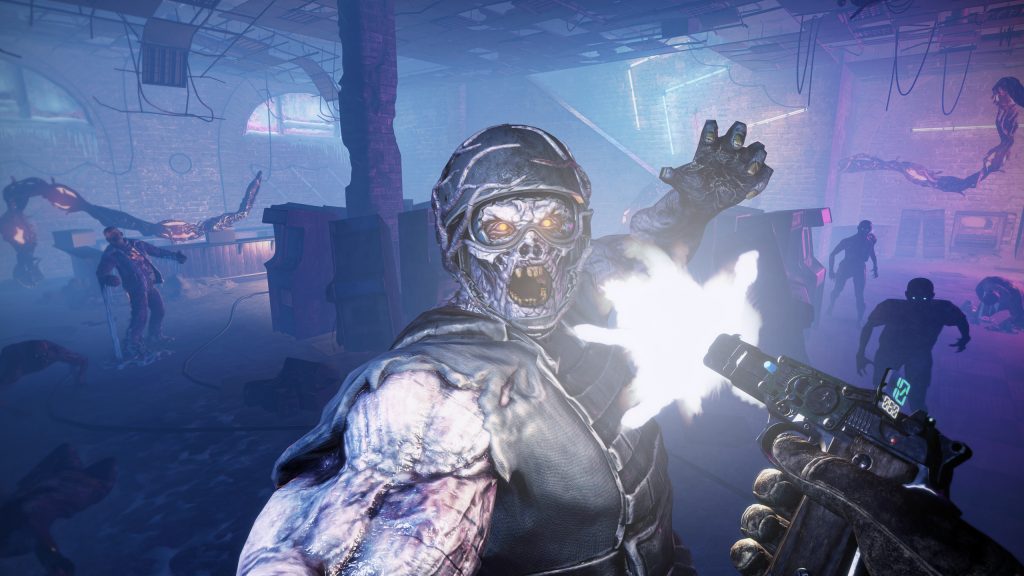 Don’t let Brutes get too close – they pack a nasty punch!

The story in After The Fall is essentially just background noise, but it gets the job done. In an alternate version of the 1980s, designer drugs caused a horrible outbreak that transformed humans into flesh-hungry zombies called Snowbreed. The game’s story takes place in 2005, 20 years after society’s collapse. You play as a survivor tasked with leaving the relative safety of the Los Angeles subways to slaughter scores of undead and collect the glowing Harvest their corpses leave behind.

The meat and potatoes of After The Fall lies in its Harvest Runs. Essentially the game’s campaign, they’ll take you through five unique environments such as crumbling Chinatown, abandoned office buildings, and a frozen-over highway. As you explore the environment and mow down hundreds of zombies (or Snowies, as the cast likes to call them), you’ll earn Harvest and floppy disks, which you can then use to unlock new weapons or customize your existing gear with a wealth of attachments back at your base. The loot system isn’t perfect, mind you. Even after putting over a dozen hours into my review build, I’m still bogged down with plenty of duplicates. Still, the satisfaction that comes from building up your arsenal and bringing down more ferocious ghouls more efficiently on successive runs makes for an undeniably addicting gameplay loop.

If you’ve ever played Left 4 Dead before, the special zombie types you’ll encounter should feel very familiar. Eaters are essentially Boomers, exploding in a lethal mist that can blind any players unfortunate enough to be too close to the splash zone. Meanwhile, Smashers are hulking Snowbreed that essentially function like L4D’s Tank, pummeling anything that gets in their way. But that’s not to say After The Fall doesn’t do anything to spice these encounters up. Leaning into the frozen theme, sometimes these creatures will have weak spots encased in ice that you’ll need to blast before you can deal any real damage. And, as you can imagine, the added immersion of having to carefully aim your motion controllers to target these areas – all while dodging other ghouls and fumbling to manually reload your guns as the pressure builds – can make for some exhilarating moments. 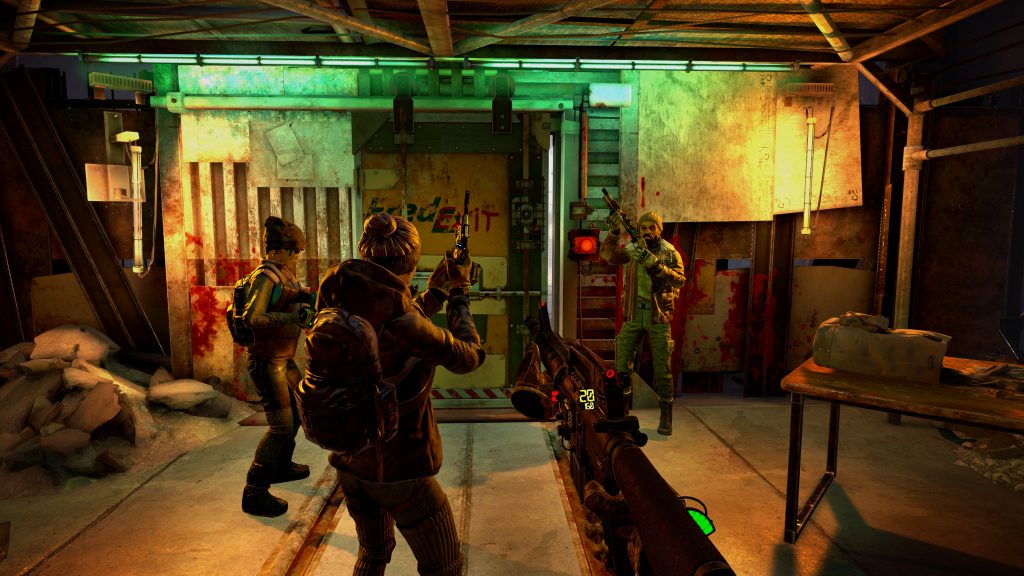 Safe rooms are the perfect place to stock up on health and ammo and calm your nerves before the next encounter.

If you’re an anti-social gamer, you can take to the streets of Los Angeles with 3 AI-controlled squadmates and still have a good time. However, playing with friends over the magic of the internet is where After The Fall shines brightest. The game supports cross-play between all platforms. So PC, Oculus Quest 2, and PSVR owners can all jump into the fray effortlessly by sharing each other’s friend codes, found in the Social menu. I can’t stress enough how great this feature is. Not only does Cross-Play guarantee you can play with your friends regardless of the headset they own, but it also ensures matchmaking is typically lightning fast thanks to the wealth of players between platforms.

Stalking the streets of LA with an entire party of human comrades is an absolute blast. The camaraderie that comes with reviving a pal at the last second to complete a stage by the skin of your teeth, or passing out some of the more potent weaponry you’ve managed to scrounge up to an under-equipped ally, really adds to the experience.

But if you don’t feel like playing well with others, that’s fine too. You can take your aggression out in the Tundradome. This is After The Fall’s competitive component, which pits two teams of four against each other for some good, old-fashioned deathmatch action. I had a ton of fun with Tundradome, and the available maps feature plenty of choke points, windows, and thoroughfares that offer plenty of options for ambushes and explosive shootouts. My only complaint is that there are only two multiplayer maps available now. With a few more environments to run amok in, I could see this game type getting some considerable playtime from me over the next few months. In its current state, Tundradome feels more like a fun proof of concept than a core piece of After The Fall’s package. 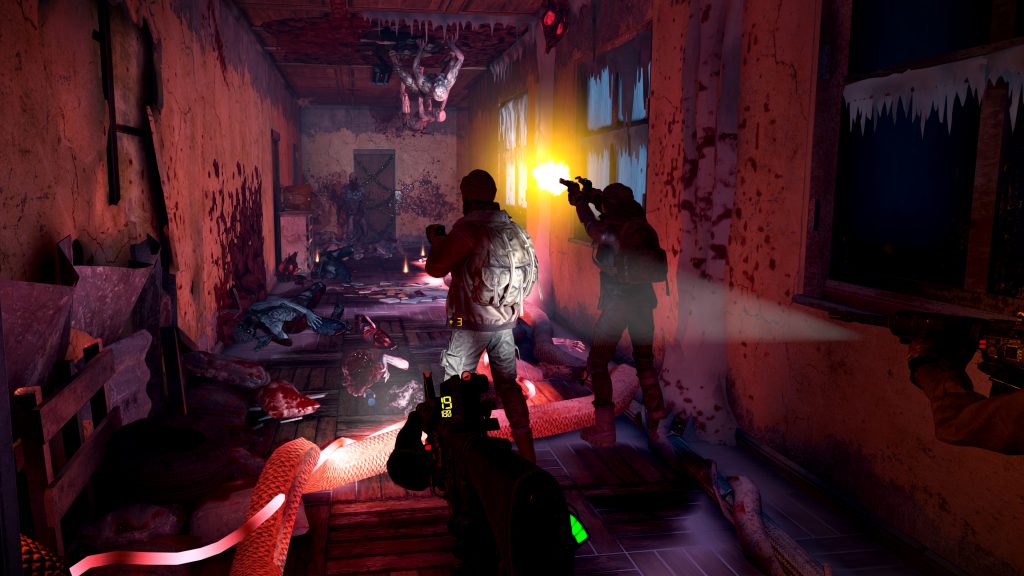 You’ll need to keep your guard up. Snowies love to emerge from holes in the ceiling and other crevices.

As much as I enjoyed my time with After The Fall, there remains a few technical issues that still need fixing. There were numerous times where I found myself stuck in the environment, causing the screen to go gray. Sometimes, I could remedy this by walking around the play area and fumbling with the controls. Unfortunately, this wasn’t enough on several occasions, and I had to close the game from the Oculus menu. As you can probably imagine, having this happen several times towards the end of a roughly half-hour-long level is pretty annoying.

Another problem that popped up a few times during my review playthrough would cause the weapons I started the session with vanish into thin air, leaving me with a puny default pistol instead. Thankfully, I recovered these items back in the hub world. But having this glitch occur when playing on the harder difficulty modes all but guarantees an embarrassing trip to the Game Over screen unless you get really lucky and find a corpse with some serious firepower or are playing with some generous human companions. Here’s hoping Vertigo Games addresses these problems soon.

When it comes to performance, After The Fall runs buttery smooth. I spent the bulk of my time with the PC version, playing on an Oculus Rift setup with a GTX 1080 and a Valve Index running an RTX 3080. While I wouldn’t say it’s the most gorgeous game out there, the detailed zombies and gun models looked great, and the action unfolded without a hitch, even with dozens of zombies filling the screen.

As you’d expect, the Oculus Quest version dials back the graphics significantly for the sake of performance. As a result, the Snowbreed feature some fairly basic models, and effects like the flashlight on your gun found in the PC versions is missing. Still, despite the lack of visual fidelity on the Quest 2, it’s perfectly playable, and I found the wire-free experience to be worth the tradeoff in the grand scheme of things.

A Comfortable Kind Of Carnage 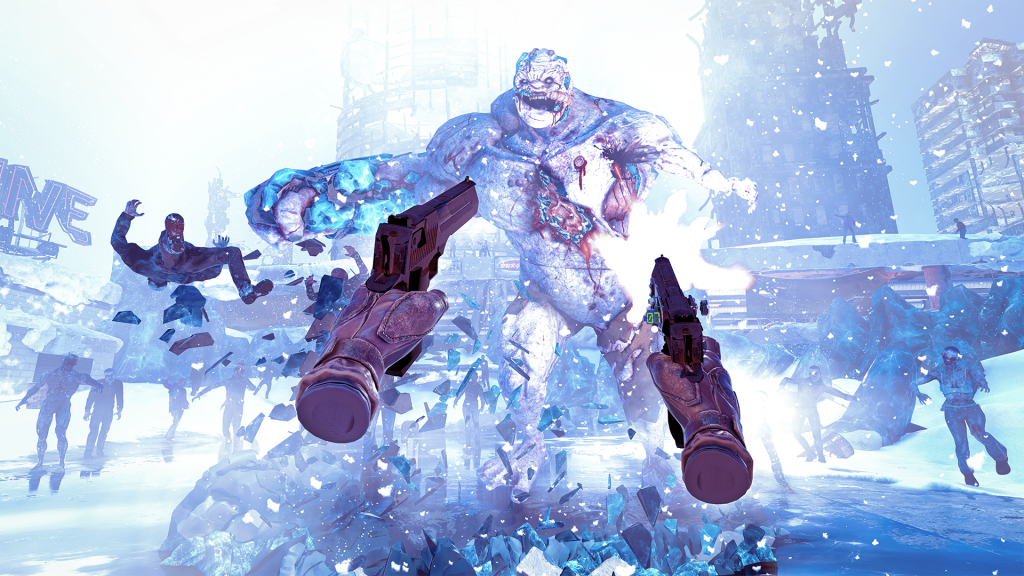 It’s a Bumble! Where’s Yukon Cornelius when you need him?

Of course, comfort is king when it comes to VR. Thankfully, After The Fall is a highly customizable affair, so if you’re a seasoned VR veteran or a casual headset user, you shouldn’t have any trouble diving in. You can choose between standing or seated play along with smooth or teleport locomotion options. And, as you’d expect, there are options for both smooth or snap turning with adjustable increments.

You also get a bit of freedom when it comes to reloading your weapons, further boosting the game’s accessibility. First, there’s a streamlined option, which functions just like Vertigo’s previous zombie shooter, Arizona Sunshine. When using this mode, you simply eject your clip and then bring your weapon to your chest holster to reload. Those craving a more realistic experience can go with the immersive reloading method instead, which requires you to eject your spent magazine, load a new one, and rack the slide or charging handle. Obviously, given how much chaos is generally unfolding at any minute, the latter method goes a long way towards dialing up After The Fall’s challenge. However, those who choose the immersive route will receive more Harvest at the end of the run as a nice incentive.

If you’re a fan of Left 4 Dead and VR shooters, then After The Fall comes easily recommended. Its cross-platform co-op is an absolute blast regardless of which platform you’re playing on. And when it comes to replay value, the game’s loot and upgrade systems will keep you coming back for more as you work to craft the ultimate arsenal of zombie-killing hardware. Still, I can’t help but wish the game had just a little bit more to offer players out of the gate. Depending on which difficulty you choose, you can barrel through its five stages in just a few hours. And with just a handful of zombie types to encounter, things can start to feel a little repetitive after a while. Still, if you’re looking for Left 4 Dead-style thrills on your favorite headset, After The Fall is as close as you’re going to get, and a solid addition to any VR gamer’s library.

Full Disclosure: The publisher provided a review copy of After The Fall.