Have you ever played an adventure horror cooking simulator game? I’d be honestly surprised if the answer was anything other than, “Huh?” That’s a lot of genres to combine, and that last one in particular doesn’t seem like it would mesh well with the first two. And yet, the delightfully demented minds over at Scythe decided the world had gone long enough without an adventure horror cooking simulator game (seriously, try saying that five times fast), and thus gave us Happy’s Humble Burger Farm. 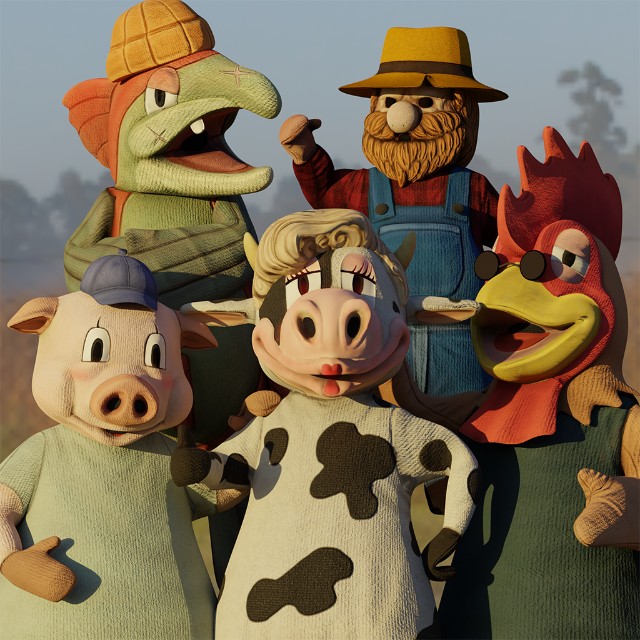 Happy’s Humble Burger Farm takes place in New Elysian City, a depressing place filled with odd-looking denizens. The apartment building you live in is a dump, to put it nicely. Well, somewhere between a dump and a trash-filled hellhole, if I’m being honest. Your personal apartment is at least fairly clean, so there’s that. You’ll wake up each day and need to trek across town to get to the titular burger joint, where you’ll need to clock in and start serving customers. You literally have to clock in, too, using a paper punch card and an oldey-timey timeclock and everything.

It’s clear from the start that something is deeply wrong with this town. It’s dark and dingy, but it’s downright cheery compared to the burger joint. Filled with the characters of Happy’s Humble Burger Farm (an in-game franchise that spawned movies, cartoons, “moonga” (manga), figurines, and more), the restaurant has seen better days. And weird things start happening as you play more. The appliances and lights will turn themselves off and on. The statues in the lobby will move when you’re not looking. And then you’ll start to find strange recordings chronicling odd events centering around Happy the Heifer and the rest of her crew. You’ll need to delve deep into the mystery to figure out just what the hell is going on.

The Steaks Are High 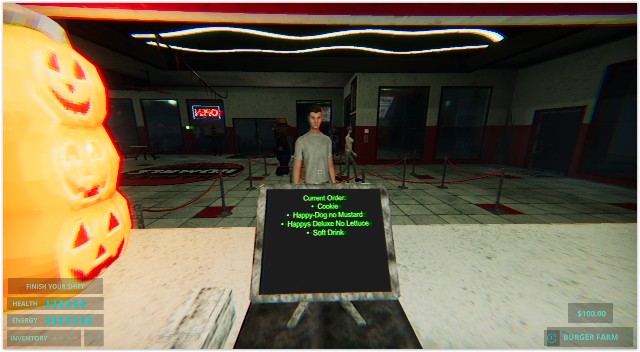 The storyline is quite intriguing and original, which is a good thing, because unfortunately the gameplay itself just feels like a mess. While it’s entirely possible that I was simply bad at the controls, it just never felt smooth. In fact, it felt like I was actively fighting the controls the entire game. The first-person view is perfectly fine, and general movement works well. Unfortunately, that’s about the only good thing I can say about it. Which is a shame, because Happy’s Humble Burger Farm is really interesting and unique!

You have to report to work each day if you want to earn a paycheck, and your money can be used to buy snacks at vending machines (more on that later) and paraphernalia to decorate your apartment with. While at work, you’ll need to complete a customer’s order without messing it up. Messing up their order – or not getting it out on time – incurs an infraction. Get enough infractions during a shift, and Happy will be, well, not so happy. In fact, she’ll come to life, hunt you down, and drag you to what I can only assume is heifer hell. In order to appease her, you’ll need to make a burger with a spoiled patty. The hard part is that any time you take your eyes off her, she moves, and she moves quickly. In fact, I was never able to successfully make her an appeasement burger, which was a source of significant frustration.

I’ve Got Some Beef With This Game 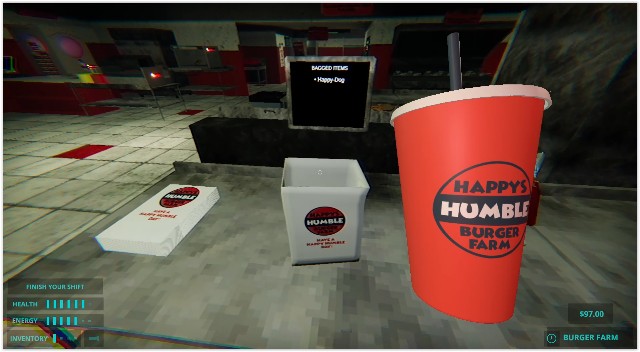 Initially, you’ll only have to make burgers for customers. You’ll take their order at the counter, and then construct their burger. This involves grabbing either a beef, pork, or chicken patty from the freezer and slapping it on the grill. Then you’ll need to lay down a bottom bun, and burger fixin’s to complete it. Some customers will have special requests, such as no pickles, or no cheese, so you’ll need to pay close attention. You’ll slowly start upgrading your restaurant, adding fries, salmon nuggets (barf), baked goods, soft drinks, and smoothies to the menu. This is all fine, and could be fun, were it not for the controls. Everything is so slow and clunky, and you can only hold up to four items in your inventory. So you’ll have to constantly swivel from the table where you’re assembling your burger to the toppings station. Oh, and if you take too long, your burger patty will get burned away and you’ll have to start over. Even adjusting the speed and sensitivity of the controller for movement it’s just clunky, the targeting reticle too frustratingly small.

And then there’s the horror/adventure aspect of the game. Weird accidents will open up new areas of the town, where you’ll need to solve some puzzles to uncover secrets. The puzzles are enjoyable enough, and the secrets unveiled are wonderfully horrifying. Often, though, this leads to a boss fight. And good lord is it difficult. Difficult to the point that I stopped having fun with the game. For instance, you’ll uncover a grotesquely fattened monster-pig, and you’ll have to cook and assemble burgers to overfeed him to defeat him. Gross but fun, right? Except that the entire time these super creepy mannequin-like things will be creeping up on you, and if they get too close, they explode, causing damage. And the entire time, the pig monster is hurling projectiles at you that will also damage you should they hit you. The extremely clunky controls make it an experience that’s significantly more frustrating than it is fun.

A Game in Need of Bovine Intervention

The art style of Happy’s Humble Burger Farm is definitely 90s-tastic. In a good way. Rough edges and textures combined with a definite PlayStation 2 aesthetic enhance the horror aspects of the game quite nicely, I thought. Sound effects are good, though the soundtrack is largely non-existent. Again, it’s a shame that such a solid design is just bogged down by terrible controls.

I honestly can’t decide if Happy’s Humble Burger Farm is a good or bad game. There are parts of it that I thoroughly loved, like the creepy storyline, the gritty, dated aesthetics that really immersed you in the game’s world, and the jump scares that got me every time. But those controls are just atrocious, hindering the game to the point it felt nearly unplayable at times. There are a lot of awesome, interesting, and unique ideas here, but unfortunately the execution just wasn’t there. 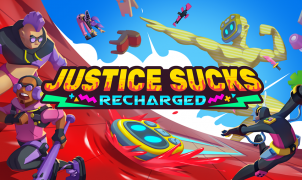 A Triumphant Return To Form For SNK’s Flagship Weapons Fighter         I have to confess; I was a little worried when SNK first debuted Samurai Shodown ahead…