It All Just Washes Away Like Tears In The Sundew 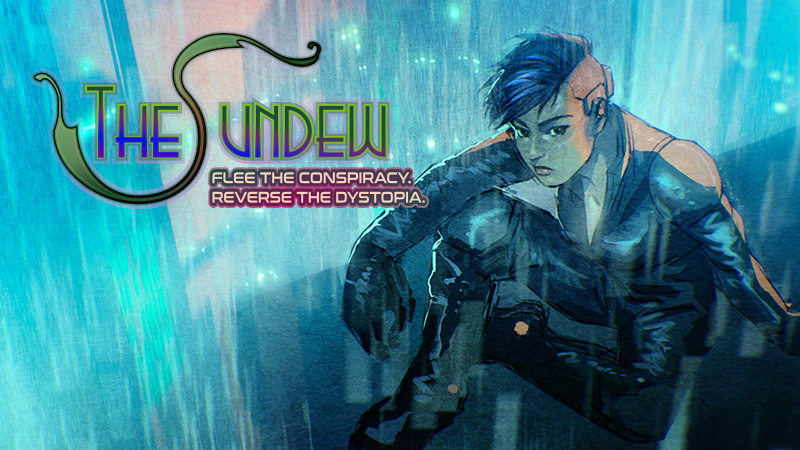 Everyone has bad days sometimes, and The Sundew inserts the player into a particularly rotten one for Anna Isolde, a cybernetic police officer in 2050s Japan. Waking up next to a snoring on-and-off lover, she finds herself with a cracking headache and a broken bot-taxi terminal rendering her unable to get to her job in a timely fashion, and she has to use lateral thinking to work it out – almost as if she was some sort of point-and-click adventure protagonist…

If that wasn’t bad enough, she finds herself an unwitting pawn in a shadow war between powerful and secretive factions with links to megacorporations and the government. With the catalyst for this mysterious conflict rooted deep within her past, she must get to the bottom of her predicament with the cost of failure being her life. Gosh, and here I think it’s a bad day when I get woken up early by construction work outside!

Right from the off, The Sundew presents you with a beautiful pixel-art rendering of a futuristic Abashiri, complete with your standard-issue Blade Runner city skylines filled with glistening multi-storey holographic advertisements. I was really excited as I first started walking Anna around and began solving puzzles. 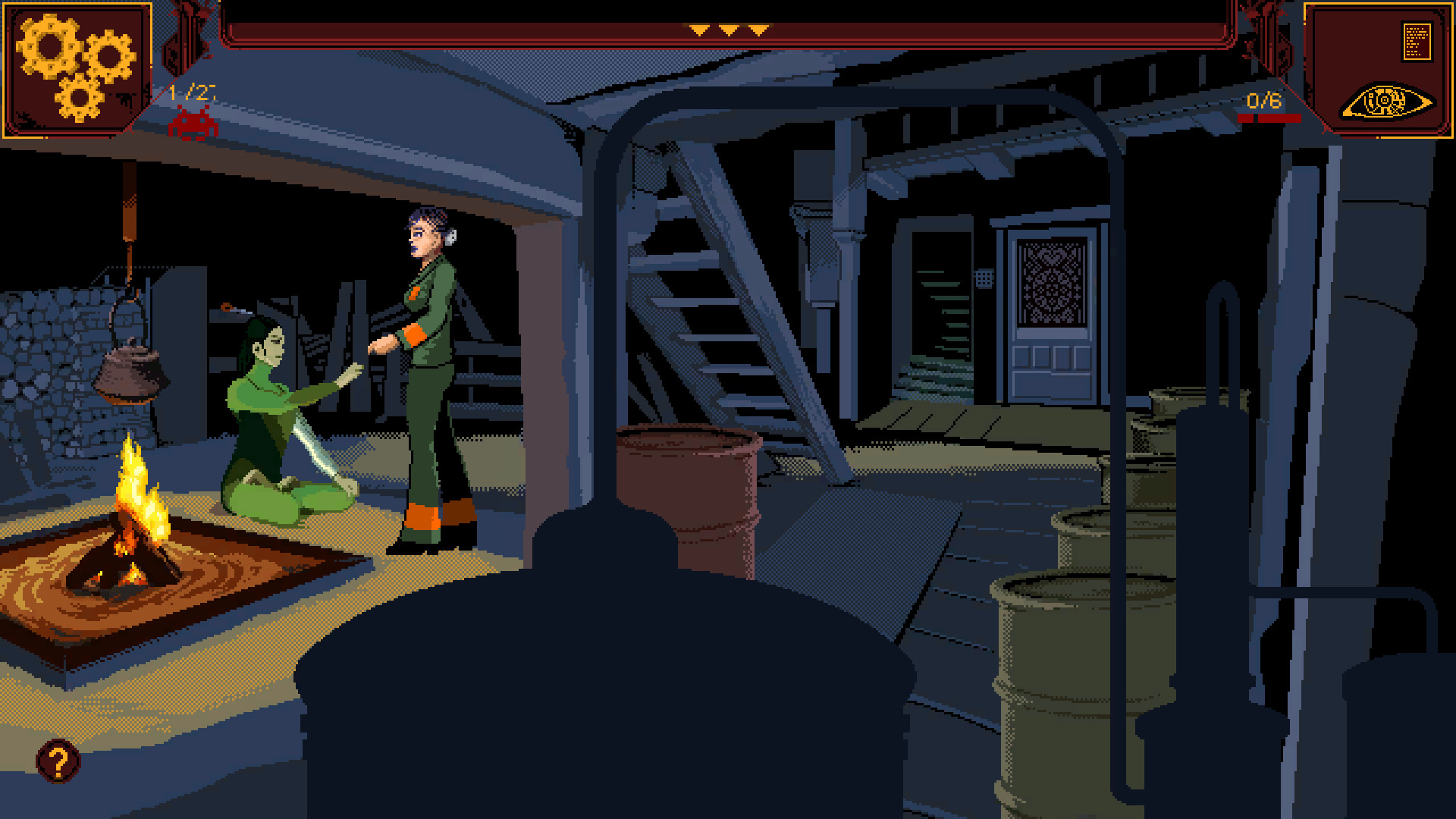 When I first got Anna down to the Police HQ, she ended up getting chewed out by her boss – cowboy antics, cavalier attitude, you get the idea. Then it came up that her boss was only mad at her after Anna had turned her down for a date. I was intrigued. Perhaps this cyberpunk thriller would be further buoyed by complex relationships and sexy office politics. How wrong I was.

Mid-way through the story, the narrative takes a dramatic turn, and I never encountered any of the characters from the introduction again, making me wonder what the point was in introducing them. The initial promise built up by the cool setting doesn’t really get a payoff.

The Sundew can be completed at a reasonably leisurely pace in under three hours. Now, there are plenty of great games that have been able to tell a good story in a short playtime, but most of those are a lot more focused. The Sundew is constantly introducing new characters who either appear once and are never seen again or are simply there as talking heads to help Anna solve the next puzzle. Anna is reasonably likable as a tough yet hard-done-by protagonist, but she never has a chance to establish relationships with anyone she meets, or develop any conflict or rivalry with a worthy antagonist. Though there is a potentially interesting conspiracy hook at the heart of the story, it’s severely undermined by a lack of investment in the characters it involves. 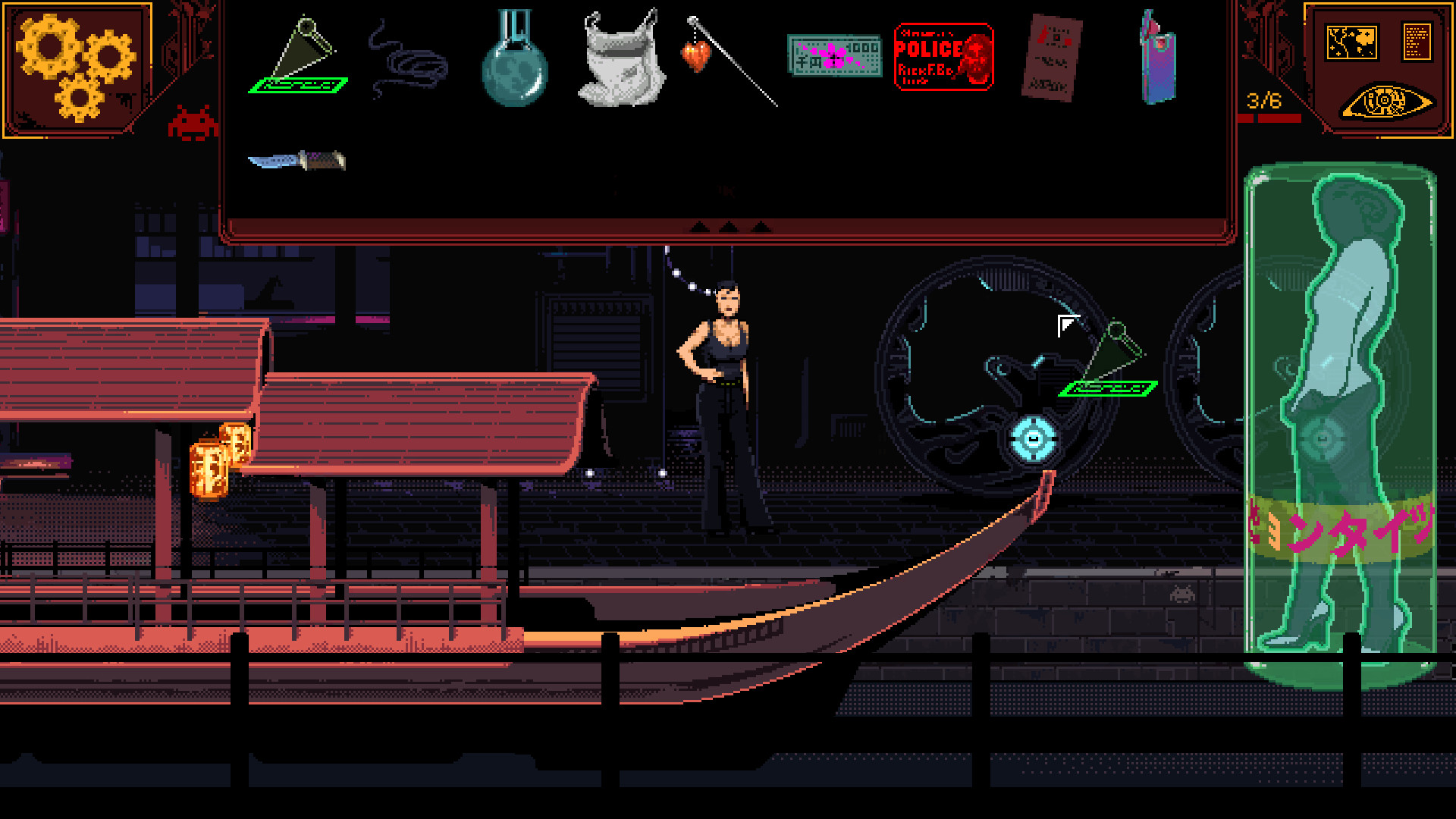 It probably doesn’t help that The Sundew’s sound direction is very low-key. With almost no voice acting and sparse music, what could be tense or climactic moments end up feeling emotionally neutral, as you hear nothing but ambient sounds of traffic or a murmuring crowd in the background.

A major issue is how random and unintuitive many of the puzzles feel. There’s one particularly ridiculous moment where Anna has been assigned a top-secret mission, but before she goes, she informs the player she needs a quick trip to the toilet. However, she can’t do her business because the stall is closed. After scratching my head a bit to see if I could get the occupant to leave, I shrugged and gave up, simply deciding to leave the restaurant. At this point Anna says: “I feel like I forgot something at HQ. I need to go and get it.” So after going all the way back to HQ, her bladder presumably full to bursting, I pick up a potted plant and a beaker of ethanol. Then I return all the way back across town to the toilets in the restaurant to find the stall has now mysteriously opened, whereafter Anna gets trapped, and the next puzzle can begin. It’s mind-bogglingly contrived, and absurd moments like this really break the immersion and slow down the flow of the gameplay. 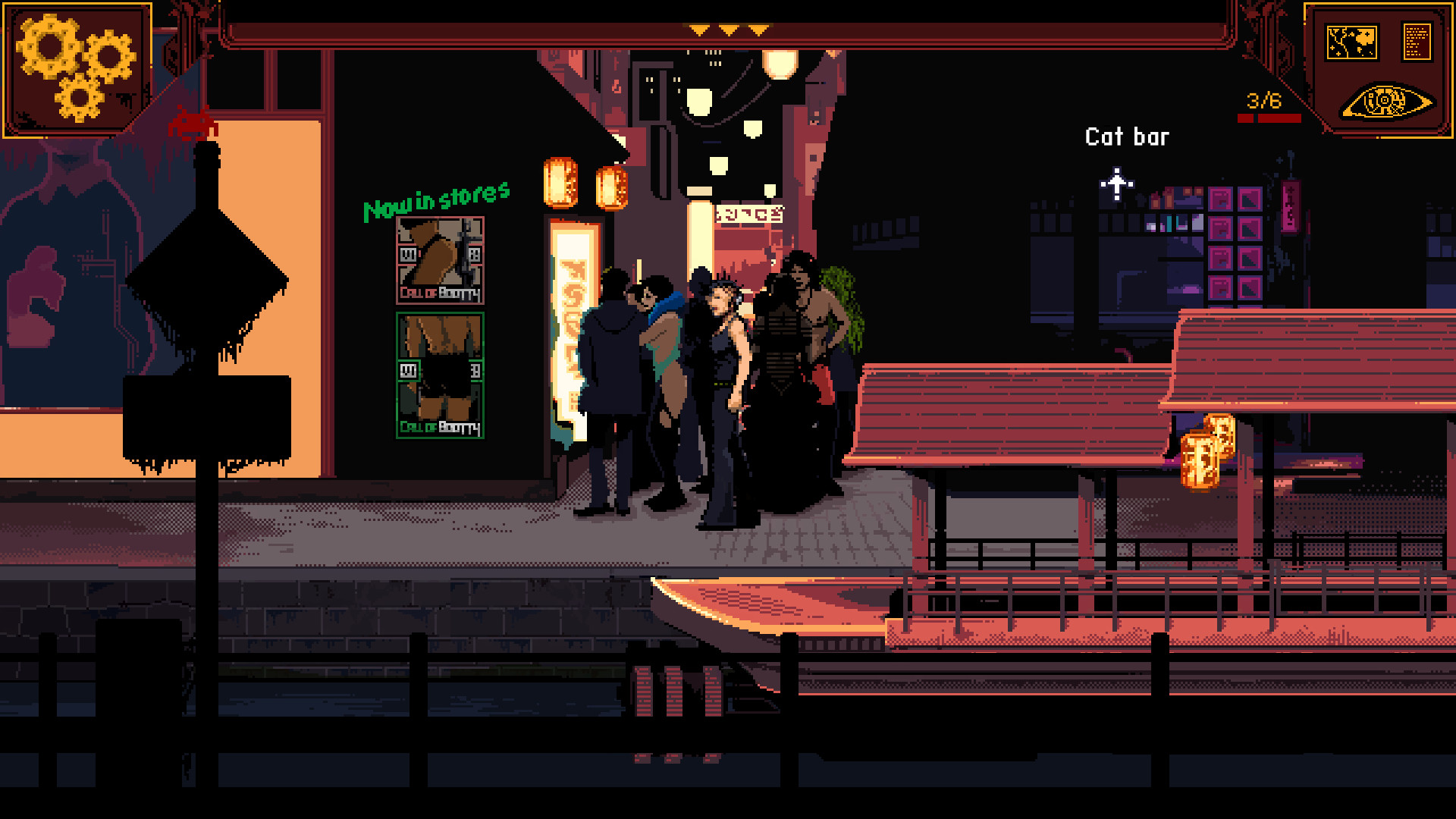 Other puzzles similarly require Anna to simply leave a room and return, often multiple times, such as at the police HQ where the quartermaster will only appear one time in ten, even though you need to hand in multiple items to him to progress the story. It’s a shame that there are some genuinely clever puzzles where the outcome is actually logical, but these are often undermined by having to scavenger hunt for tiny items that fade into the background.

The most fun part of the Sundew was finding the little Space Invaders-style aliens which appear throughout the game, artfully hidden amongst the scenery. When you click on them there’ll be a cute little message like “you found me!” before your score tally of located videogame extraterrestrials is increased. It’s like a cyberpunky pixel-art version of Where’s Wally (or Waldo if you’re a Yankee Doodle). It’s not really the most ringing endorsement, though, that nabbing collectables is more engaging than the main story itself.

Playing The Sundew is much like eating at a fancy boutique restaurant. You’ll be served something that’s beautifully presented only to then find the meal isn’t nearly substantial enough to fill your belly, and you’ll be aghast at the bill for it. The story flies by before it’s even had a chance to begin, and even though there are multiple endings, they only add a little sliver of extra playtime. Though there’s a little fun to be had in exploring the lovingly rendered pixel art scenery, this cyberpunk outing is sadly destined to wash away from your memory – like tears in The Sundew.

Full disclosure: This review is based on a review copy of The Sundew provided by the publisher.