To The Rescue! Review: Adopt until you drop! 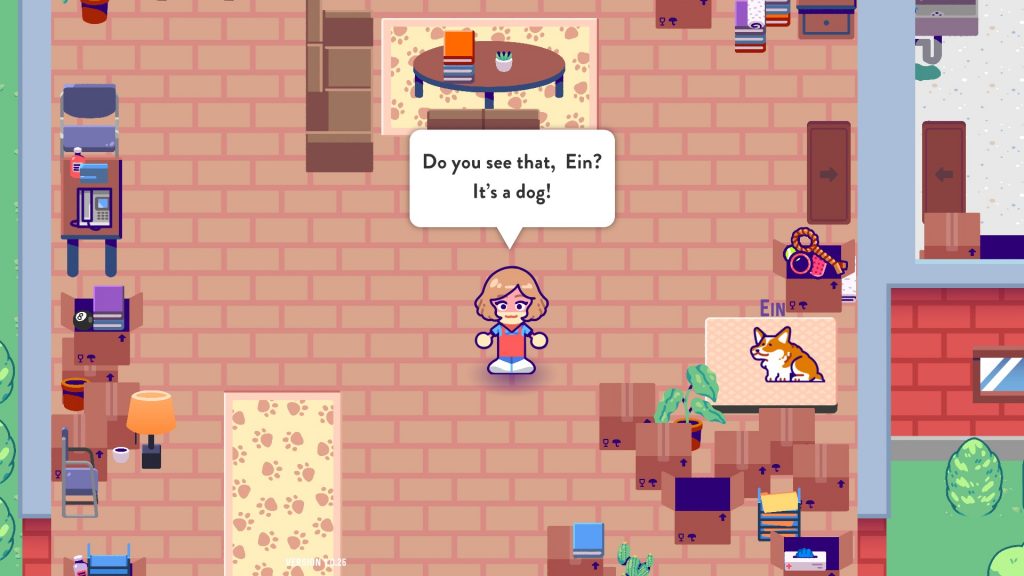 Reviewing games is interesting — you can never tell from the cover alone which games you’ll just go through the paces with and which ones will sink their teeth into you. It doesn’t matter if the game isn’t the prettiest or perhaps has some issues; all it takes is spending a little time with it to understand its true nature. Much like adopting a pet from a shelter, you might come in with preconceived notions, only to abandon them once a certain spark changes your mind. To me, To The Rescue! is like the cute yet troubled dog who needs a little TLC to really shine, but once it does, this one will indisputably become best in show.

It’s hard not to immediately fall in love with To The Rescue!’s premise, a dog shelter simulator with cutesy graphics, dulcet tunes, and, naturally, a whole host of good doggos to find fur-ever homes for. Developed by Little Rock Games and published by Freedom Games, To The Rescue! is available on PC for the fair price of $19.99 with 20% of the proceeds going to the Petfinder Foundation. Promising players the ability to “upgrade your shelter, control disease outbreaks, learn each dog’s preferences, and make tough decisions, all while helping support real-world animal shelters,” To The Rescue! recreates the spectrum of dog shelter management activities in both delightful and depressing ways. 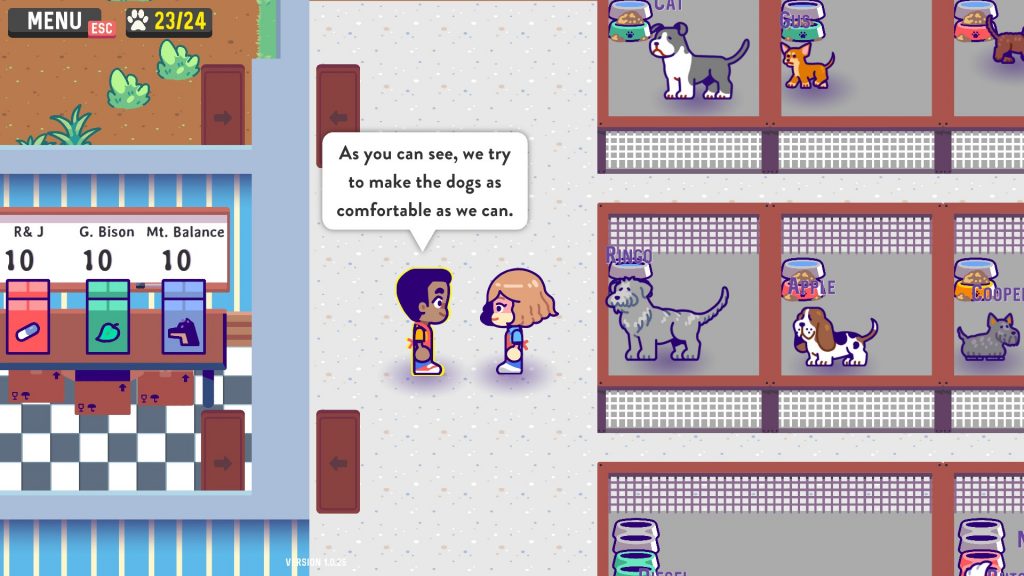 To The Rescue!’s story mode starts off relatably enough — a dog lover with good intentions and maybe too much time on their hands finds a stray puppy and decides to take it to the shelter they adopted their own dog from. Unfortunately, that shelter was already full to the brim with dogs needing homes, so our protagonist decides to set up a kennel in the garage to house the little guy. One thing leads to another, and suddenly the mayor is trusting you with running an entire shelter on your own! It started off with a miss(ing dog), how did it end up like this?

Ah well, you’re apparently more than happy to take on the role of dog shelter manager, so let’s just jump right into it. To The Rescue! lays out all the mechanics pretty simply — obviously, the main gameplay here is getting a dog housed in the shelter before someone takes them home. This means you’ll be grabbing any new dogs from the waiting kennel and placing them into any empty ones you might have ready for them, followed by giving them food, water, baths, vaccines, first aid (if necessary), and plenty of playtime. As the days roll on, your shelter gains reputation and you gain experience points, allowing you to unlock things like faster walking speeds, more kennel types, and conversational tactics to help reluctant people see the joys of adopting a dog. 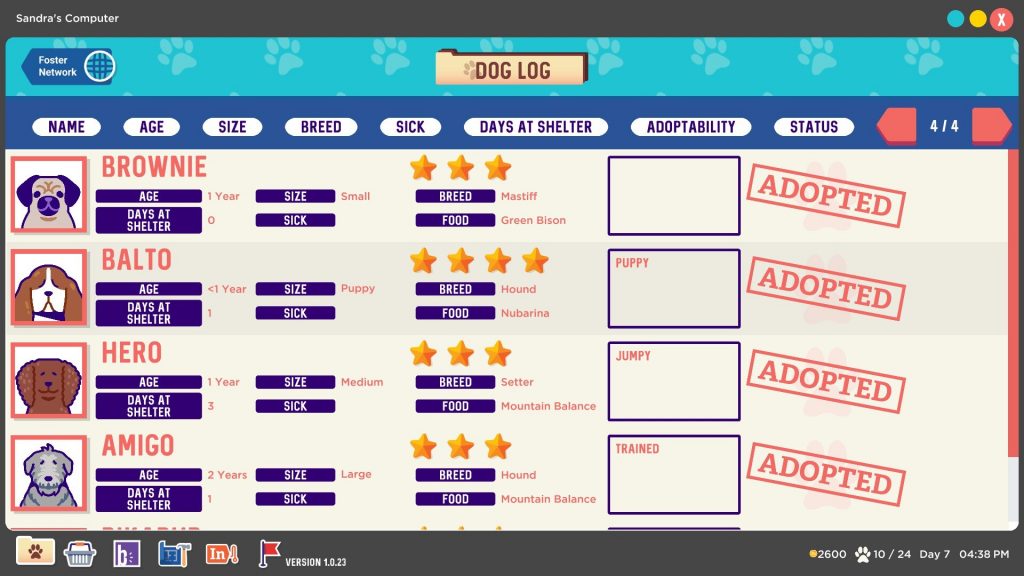 Of course, it’s not as simple as just throwing food at dogs or — heaven forbid — chucking dogs at people; To The Rescue! features a ton of different dogs, each with different qualities, stats and needs. Vaccinating, bathing, and feeding the dogs in your care can increase their adoptability, but at the end of the day, it’s still hard to get every dog adopted. On the other end, plenty of adopters looking for a canine companion state they have certain preferences, like trained dogs or terriers. Their willingness to adopt can be impacted by the types of dogs you show them, matching not only their needs but mixing in some dogs with high adoptability as well. Carefully consider which dogs you show each adopter, as you can only bring out five per person. Will you be able to blast away each adopter’s reservations and get these dogs into loving homes?

There are quite a few other aspects of To The Rescue! that I feel are largely hit or miss, either because they’re unnecessary or they never came up. For one, you can expand your shelter in an attempt to build more kennels to house more dogs, but no matter how hard I tried to get the game to allow me to grow my shelter, I never got more than 25 dogs (despite having kennels for 74 and plenty of room for more). Additionally, I completely skipped over the play mechanics, as I was able to get dogs adopted even on the hardest settings by the time I unlocked the play spaces. Why spend precious time playing tug or war with one dog when I can try to spawn an adopter event that I can easily win by offering a discount? 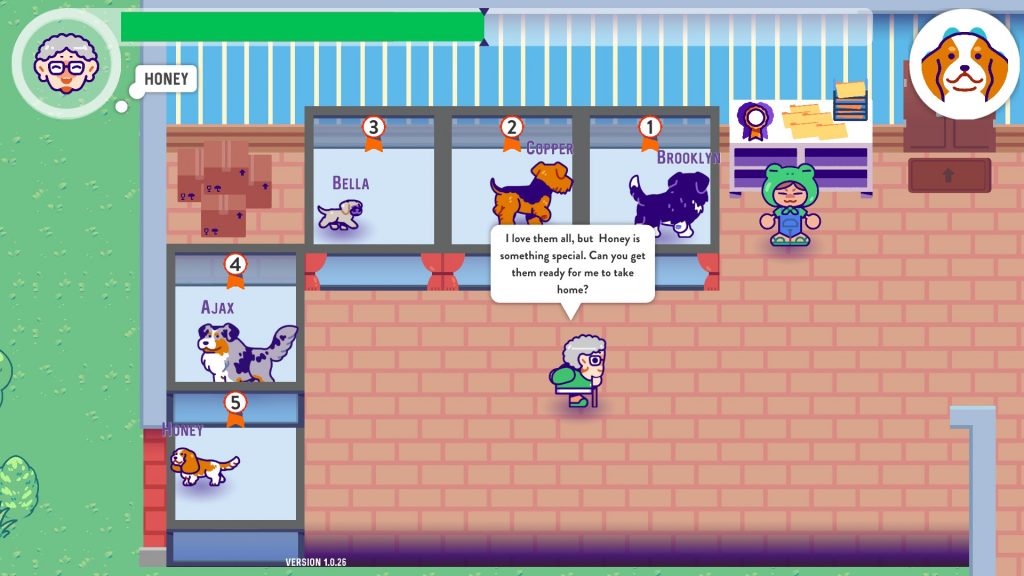 Also, while I was curious about how the game would handle euthanasia, I (fortunately) never had a reason to test it out. For those who can’t bear to put pixelated dogs down, there is the option to change euthanasia to “send away,” but the story mode does touch upon why some shelters humanely help animals cross the rainbow bridge. Having had to go through the painful experience myself with two of my cats, it’s not something I was extremely eager to test out per se, so perhaps some will take comfort in knowing it’s not only entirely optional but almost completely avoidable.

One hit in my book? The foster network, which allowed me to send dogs with low adoptability off to a foster home until they found their fur-ever home. Not only did it help offset the cost of care and feeding the dogs in the shelter, but they were practically adopted out as far as the mechanics were concerned. Every so often I’d get a notification from a foster that a dog had been adopted, but after a few in-game weeks I had four times as many dogs in foster care than I did in the actual shelter. Preferable, considering they were in a home setting with more constant, individual attention. 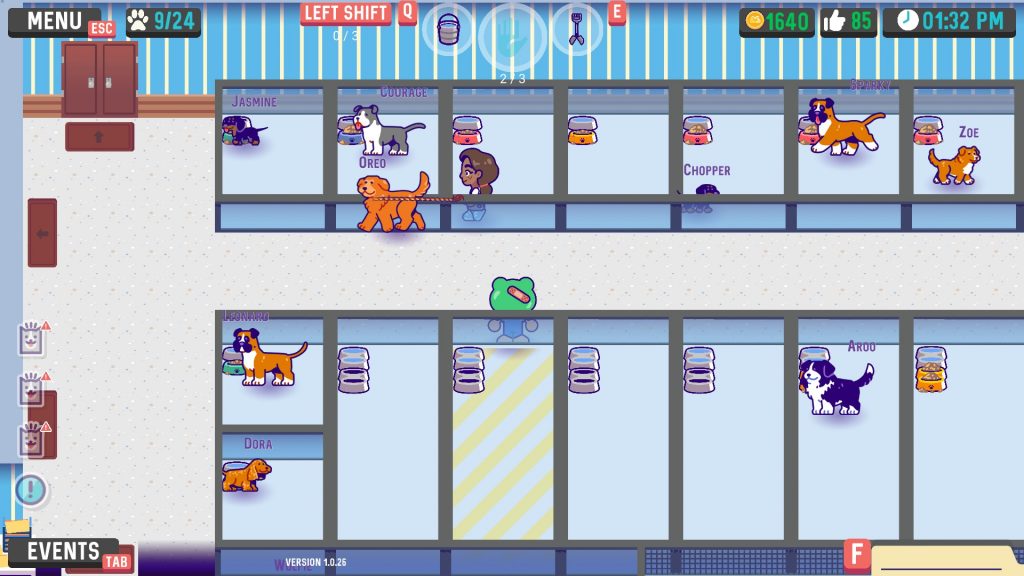 For those who are still reading, I’ll have you know I poured 24 hours over the course of 3 days into this game; there was one day when I woke up and played for 12 hours straight, only stopping for meals. I mention this because with a game so addicting like this one, you’d think I’d score it higher, but like that aforementioned dog in need of TLC, To The Rescue! has some issues. A month and some change after launch has done the game good, but alas — some pesky bugs remain. Helpers often get trapped in kennels or just stop what they’re doing entirely, the only recourse to fire them and take the reputation hit. Grants also do not work as intended, only occasionally awarding you money for hitting goals. Also, if you save, exit, and come back later, all the dogs reset to some degree, like days spent in shelter or even skins. Without fail, I’d exit the game with one type of dog, only to come back with an entirely different one. It was certainly odd!

I’d wager the majority of To The Rescue!’s problems are small, like poop sometimes not showing up with flies buzzing around nothing or tools being a bit fidgety; essentially, pretty much all of these issues are ones you can work around. In fact, the only one I find inexcusable is that there are only 3 save states possible (why???), everything else just a bump in the road on an otherwise fun journey. There isn’t much depth to the game if I’m being honest (the story mode feels like an extended tutorial and is only 3 – 4 hours long), but it’s got that repetitive flow state gameplay that makes for mindless fun. And honestly, isn’t that what some of us want at the end of a long day?

To The Rescue! isn’t without its flaws, but like a cute yet shy dog tucked away in a shelter kennel’s corner, it’s still worthy of any dog lover’s attention. It may have had a rocky start to life, but the developers have been hard at work tackling bugs and fixing issues, so it’s safe to say that any perceived problems will soon be a thing of the past. If you’re ready to roll up your sleeves and find fur-ever homes for pixelated pups, To The Rescue! just might be the most doggone fun dog shelter simulator out there.

Editor’s note: This review is based on a retail copy of To The Rescue! provided by the publisher.