Ghost of Tsushima: Iki Island Review: Back to the Past, Samurai Jin 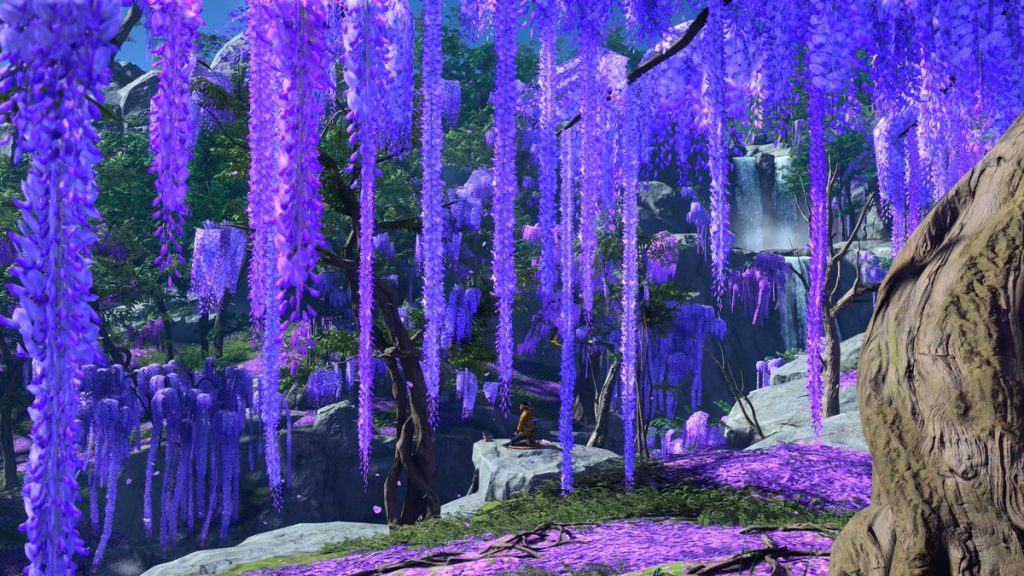 Although Ghost of Tsushima ended as perfectly and poignantly as possible, I admit that I felt the insatiable need for more of Jin Sakai’s story. The island of Tsushima had been so vibrant and interesting with an abundance of secrets to explore — so much so, that long after the credits rolled I couldn’t pull myself away from Jin’s homeland, traipsing through every nook and cranny until I had uncovered the island’s many secrets. An unforgettable journey through a period of time surprisingly underutilized in video games, the Ghost’s potential couldn’t be ignored; how would the team pull off more content in an already gloriously summed game?

Of course, this is Sucker Punch we’re talking about; with critically acclaimed franchises like Sly Cooper and Infamous under their belt, it was clear the team was up to task. Taking yet another page out of the history books, the team decided to focus this new chapter of Jin’s story on the neighboring island of Iki, albeit (naturally) with some creative liberties. Although players can tackle Iki Island upon completion of the first act, it’s best to beat the base game before heading over, as the enemies are a bit tougher and some of the puzzles require armor sets unlocked through the main storyline. A 15 – 20 hour experience on average, Ghost of Tsushima: Iki Island is an emotional addition to Jin’s saga that not only tests his resolve, but his character as well. 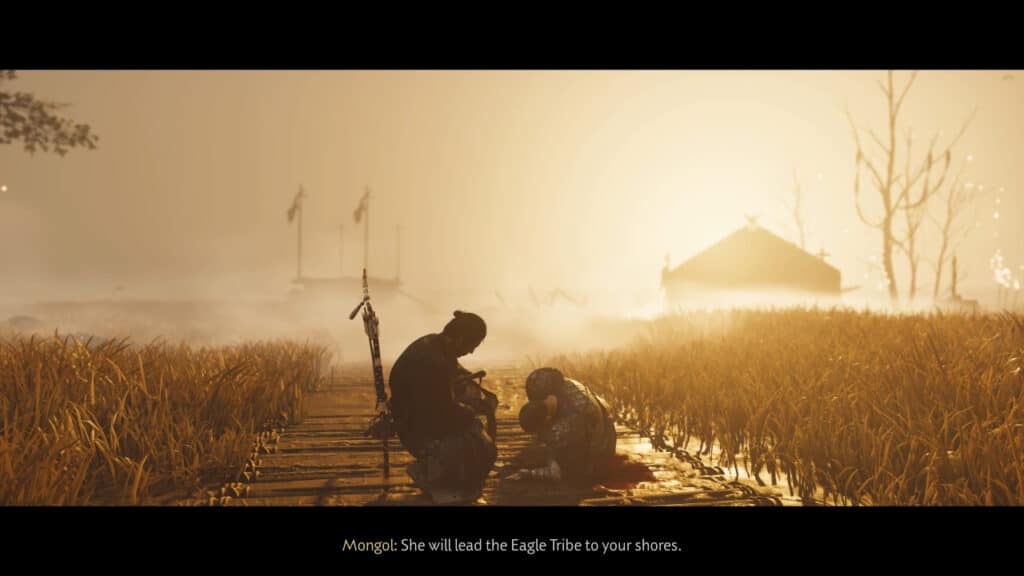 Ghost of Tsushima: Iki Island opens up on Jin investigating a rumor about a mysterious village, its inhabitants all acting like they’re being attacked by an invisible force. With Yuna’s help, Jin comes to realize that another Mongol force is invading the Japanese islands, led by a religious zealot calling herself “The Eagle.” Determined to find a cure for the villagers in this wretched state, Jin boards a ship for the neighboring island of Iki to put a stop to The Eagle and her plot to dominate his people.

Of course, things aren’t as simple on Iki as they were back home; after all, the last time he was here, he was part of the samurai invasion force led by his father, Kazumasa Sakai. Watching his father fall at the hands of the raiders that inhabited the island has haunted him his entire life; ironically, it would be these very people he would now seek to protect from the Mongols. Will Jin be welcomed as a savior, or scorned as an enemy? 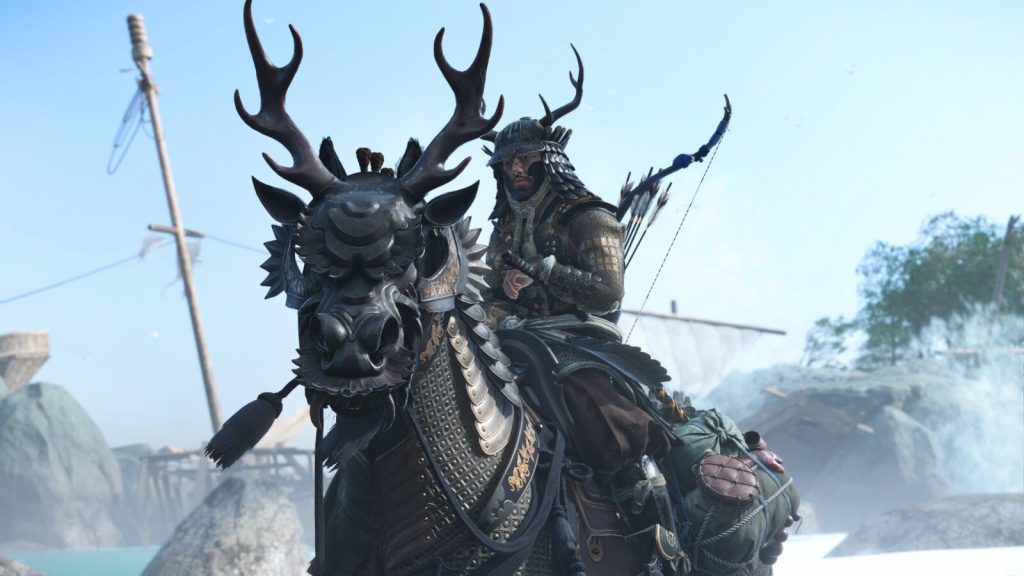 It doesn’t take long for Jin to learn about The Eagle and her tribe. Like Khotun Khan’s force, the Mongols have archers, swordsman, shieldsman, and more at their disposal; unlike the Khan, The Eagle’s warriors travel with a shaman, whose mystical songs strengthen the enemies to such a degree that it’s exceedingly difficult to attack while he warbles on. Unfortunately, Jin will discover this the hard way, and is soon captured by a band of roving Mongols. Taken to The Eagle’s holdout, she pours a concoction down his throat that gives Jin horrible visions; it becomes clear that the villagers back on Tsushima were also fed this medicine, and it’s up to Jin to defeat The Eagle and overcome this terrible “gift” she’s bestowed upon him.

While there was plenty to explore on Tsushima, Iki feels like a playground. Everywhere you turn, there’s a mountain to scale, an abandoned village to scour, caves to spelunk, and more. It’s easy to miss a hidden activity or location because, despite its small size, Iki is packed to the brim with things to do. There are even a slew of unexpected Easter Eggs to stumble upon that had be giggling in delight (I won’t spoil them for you). As far as exploration is concerned, Ghost of Tsushima: Iki Island is beyond satisfying. 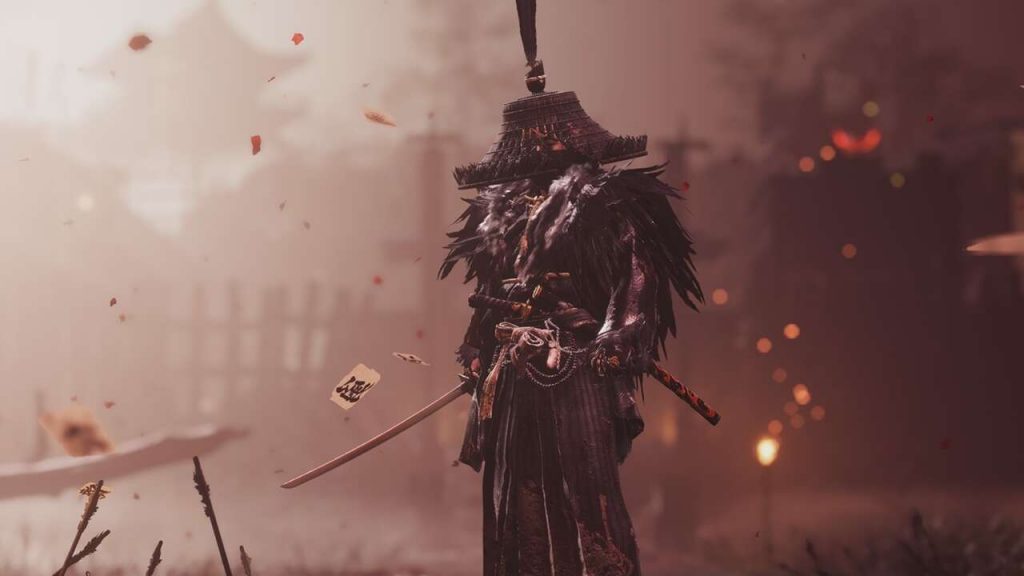 Of course, Ghost of Tsushima: Iki Island isn’t just an extension of Tsushima — the islands are quite different from each other both in feel, history, and culture. As Jin rides through Iki, he beholds the scars inflicted by his father on the land and its people. Storytellers regale eager listeners of the time raiders took down the elder Sakai, known as “The Butcher of Iki.” Sakai banners dot the landscape, marking pivotal battles against the samurai and painful memories for Jin. It seems the small island has yet to heal from his father’s deeds, Jin wrestling with his own actions during the samurai invasion all those many years ago.

Not all is doom and gloom, however; as Jin battles back the Mongols, he encounters archery challenges, haiku spots, hot springs, and even animal shrines. Unlike Tsushima, which held foxes sacred, Iki offers sanctuary to monkeys, deer, and — most notably — the Tsushima Leopard Cat, an adorable (yet sadly endangered) wildcat native to continental South, Southeast, and East Asia. A new flute playing mechanic allows Jin to serenade the wild animals while waxing poetic about time spent with his mother. The emotional depth tinged with sadness juxtaposed to the delightful ability to pet the animals, this mechanic showed players yet another side of Jin’s complex character, helping us understand the inner turmoil our hero struggled with. 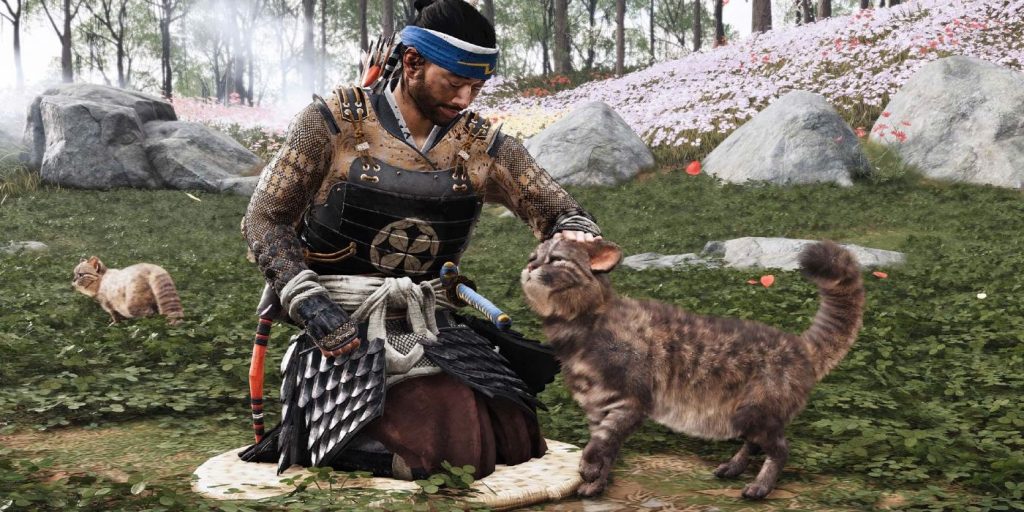 As for the goodies you can gather in Ghost of Tsushima: Iki Island, let’s just say that Iki is the land of plenty. Through quest completion it’s possible to receive a new set of armor, a set of horse armor, a whole host of headbands, hats, charms, and masks, and what feels like a dozen or two new armor dyes for both Jin and his horse. One of the coolest items in the game can be found here as well: the saddlebags, which allow Jin to collect more arrows, darts, and the like to pack away on his horse for a rainy day. Although I definitely wish the saddlebags came earlier on in the game (or maybe even gifted on Tsushima), it’s an absolutely welcome item that helped me feel like I didn’t have to hoard my ammo as much since I could always jump on my horse to restock after an enemy encounter.

Although I refuse to completely spoil the storyline for potential players, I will say that Sucker Punch has achieved greatness yet again with Ghost of Tsushima: Iki Island. Where the base game showcases not only Jin’s battle against Khotun Khan but also the rigid philosophy of his uncle, Iki forces Jin reconcile the loss of his father — in both life and legacy — in addition to preventing The Eagle from spreading her ghastly concoction. Where the base game left me shedding a tear or two, Iki left me in awe of Jin’s powerful self-actualization that resulted in working through the extreme trauma and guilt of losing his father. If the base game culminated in Jin’s decision to uphold traditions or eschew them in the name of familial love, Iki bore witness to the moment Jin stepped out from the shadow of his father and became the man of his destiny.

Editor’s note: This review is based on a retail copy of Ghost of Tsushima: Iki Island DLC purchased by the reviewer. 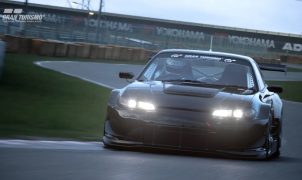