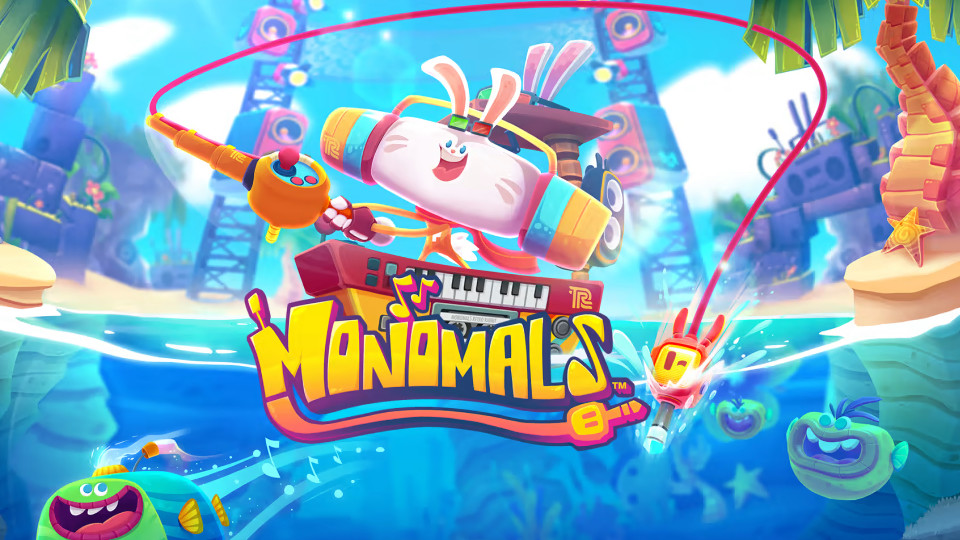 Creativity is often overlooked in the game industry. I don’t mean that as a slight. It’s just a truth that many games prosper while mostly emulating other titles that originated ideas. There’s lots of sharing in any industry, and that’s okay. But when you come across a developer as creative as Picomy, you have to pay special attention to creativity. Their latest game is called Monomals, and it’s one of the weirdest fusions I’ve played. It’s a game about music, but also fishing. Oh, and did I mention it’s also a platformer? It should be clear already that Monomals has creativity in spades. Keep reading this Monomals review to see if it manages to bring forth a cohesive product despite the wild diversity of ideas in play.

Monomals is actually the second game I’ve played by Picomy. The first is called Heroki. And while that was a mostly enjoyable adventure, it was occasionally too ambitious for its own good. By contrast, Monomals manages to mostly focus on one core concept, and build around it in strange and inventive ways. 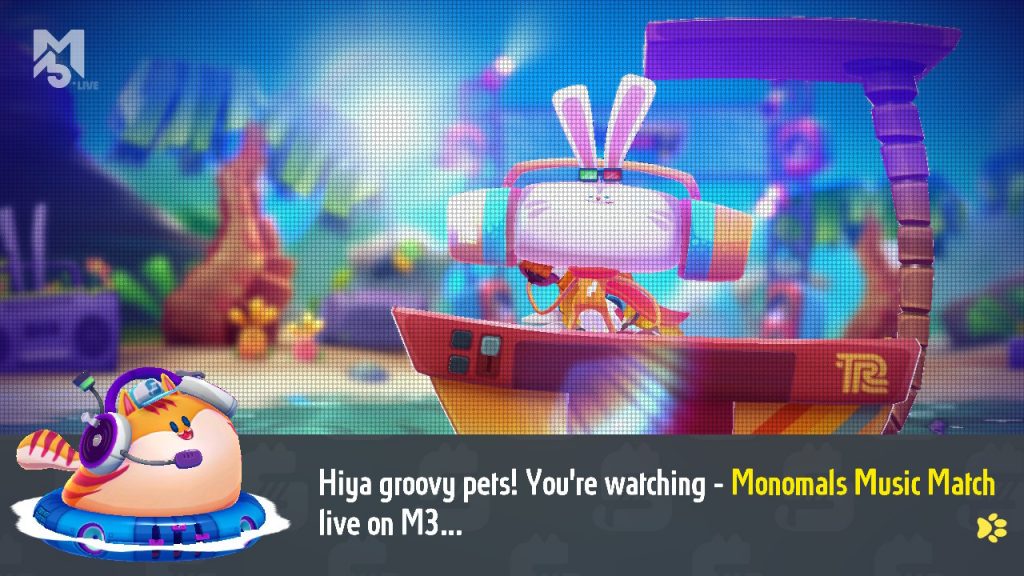 Welcome to the Monomals Music Match, broadcast live on M3! Our talented host is none other than MC Scratch, who oversees the local musicians. Sure, they’re all a bunch of animals, but they’re animals with talent. First up is DJ Retro Rabbit, a groovy hare that enjoys classic games. He’ll eventually be joined by the likes of Funky Frog, Techno Tiger, and Rocky Rhino. They have their own musical preferences, but they’re all ready to strut their stuff in the contest. Your goal is to help them do so, through a series of platforming challenges and by composing fresh musical tracks. Oh, and did I mention you play the Mono-Plug thrown from their fishing poles?

Reel In a Winner 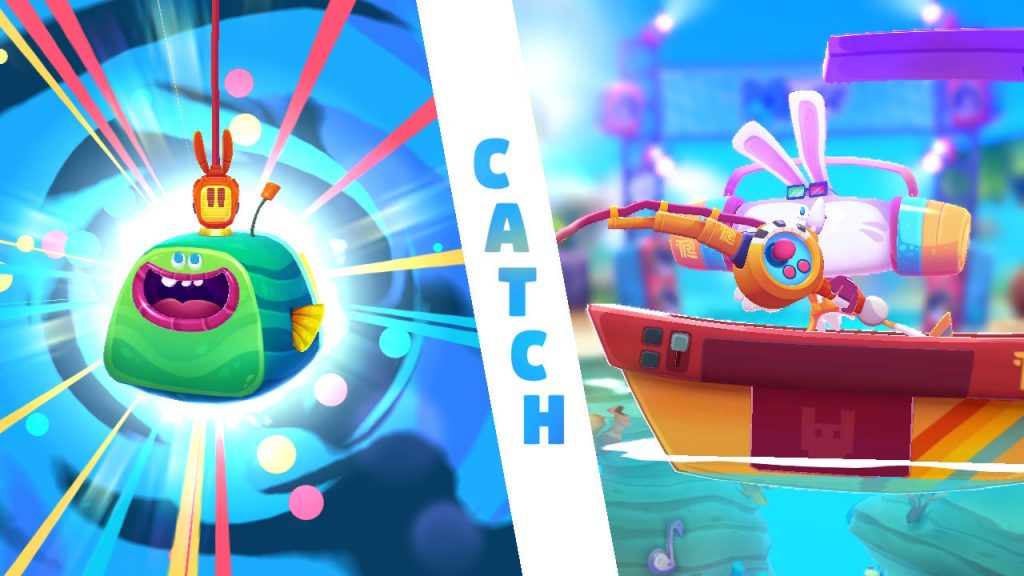 I know what you’re thinking – fishing and music don’t mix. And normally, you’d be right. But in Monomals, you have to catch the titular fish by using said fishing poles. Once caught, you literally arrange the Monomals in the Piano Pool to create beautiful music. So knowing that, let’s talk about how the platforming works in the game. 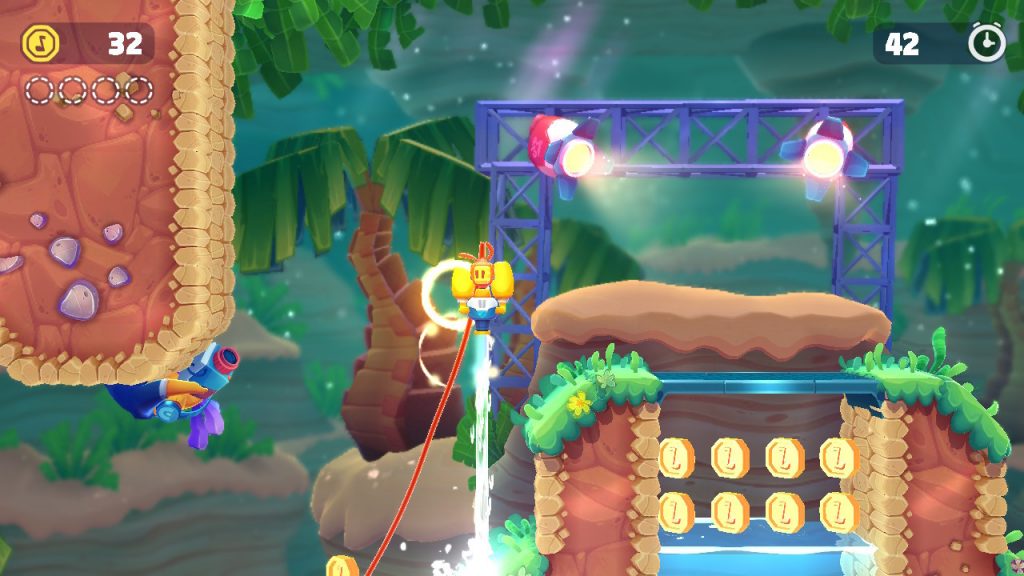 Every level starts with your heroic DJ thrusting their fishing poles out, hurling the Mono-Plug (that’s you) into the water. Once there, that’s where things get interesting. I’m not sure if the Mono-Plug has its own AI or what, but it’s capable of a lot more than bobbing until a fish gets hungry. By pressing the joystick, you’ll move around in any direction you choose slowly. To get a burst of speed, press A or B to have it boost forwards in whatever direction you’re aiming. This not only lets you break objects, but also defeat foes. The only limiting factor is the boost meter. Once it’s empty, you’ll have to wait a few moments until it refills. By holding A or B once you reach the surface of the water, you’ll take a huge leap out of it, which is very important to navigate the out of water sections (of which there are surprisingly many). Finally, by pressing A or B a second time while airborne, your Mono-Plug will do a handy double jump. 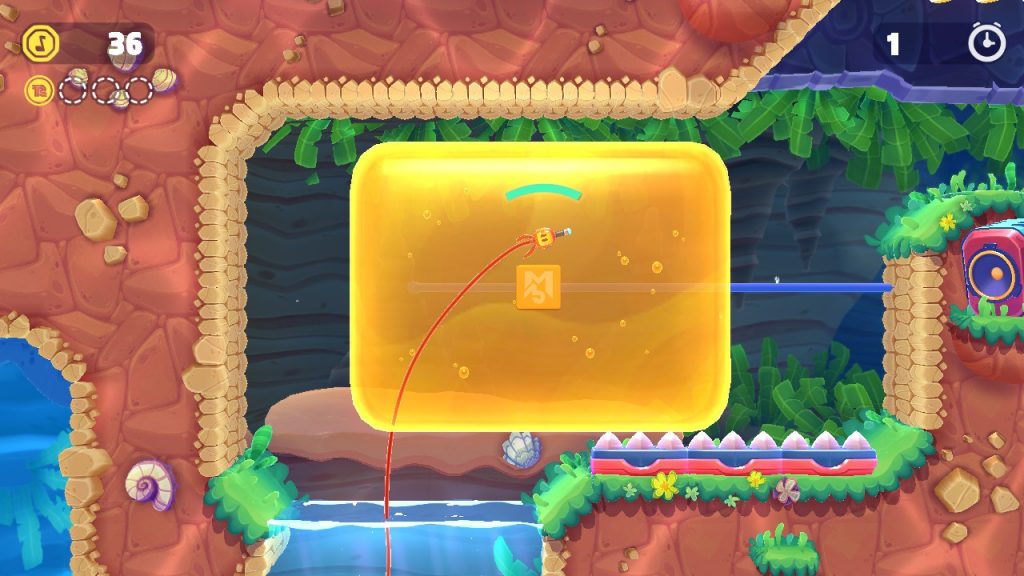 As you can tell, there’s a lot of moves at your Mono-Plug’s disposal. The key thing to keep in mind is momentum. Once you’re airborne, you won’t move a lot in any direction other than where you’re immediately headed. So it’s easy to flop onto something dangerous by accident, like spikes or lava. And no, I’m not sure why there are so many death traps in a musical contest, but there’s a lot you’ll learn to navigate. Besides the standard moves, I listed above, many stages also have unique vehicles to ride around in. Some allow your Mono-Plug to climb walls, super soaker over dangerous surfaces, and some let you burst forward in a flurry of speed. It’s a lot of fun trying out all the different features in the game, even though there’s a lot of trial and error in learning the ins and outs. 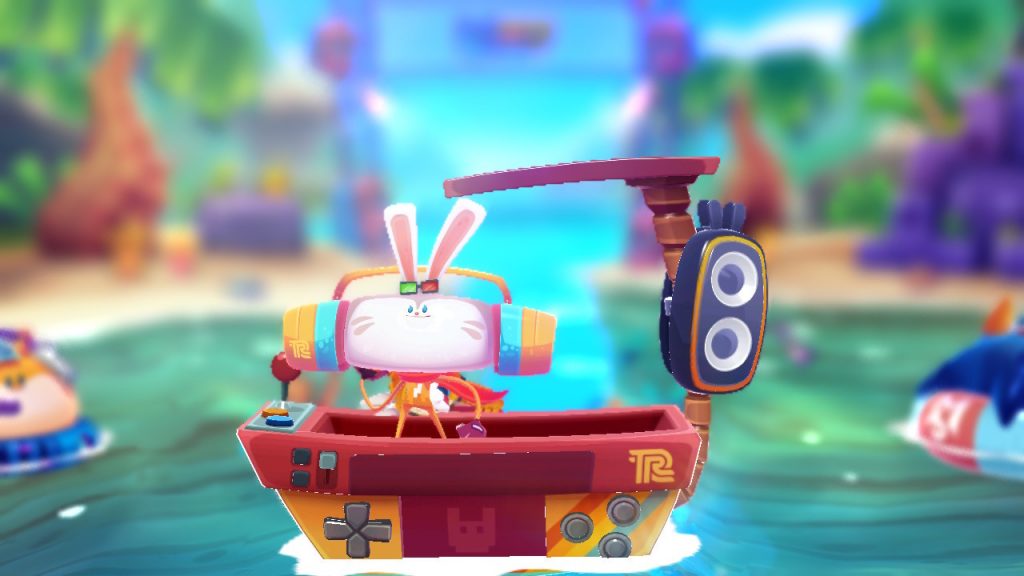 Navigating each of the game’s 28 stages (with seven available for each DJ) takes a lot of practice and patience. There’s plenty of tricky traps, precise platforming, and devious puzzles. You’ll die after taking a couple of hits, so you’re going to accumulate a death tally. Luckily, all you lose when you die (besides pride) is a handful of regular coins. You’ll find a ton of these in each stage, as well as four well-hidden DJ coins. The latter are used to unlock swag to pimp out your DJ’s boat, while the former is used to unlock additions to the MonoMaker (more on that later). And though there aren’t really boss battles in the game, the closest equivalent are found in the Arenas. They’re located at the end of each stage, and beating them rewards you with a new Monomal.

Battle To the Depth 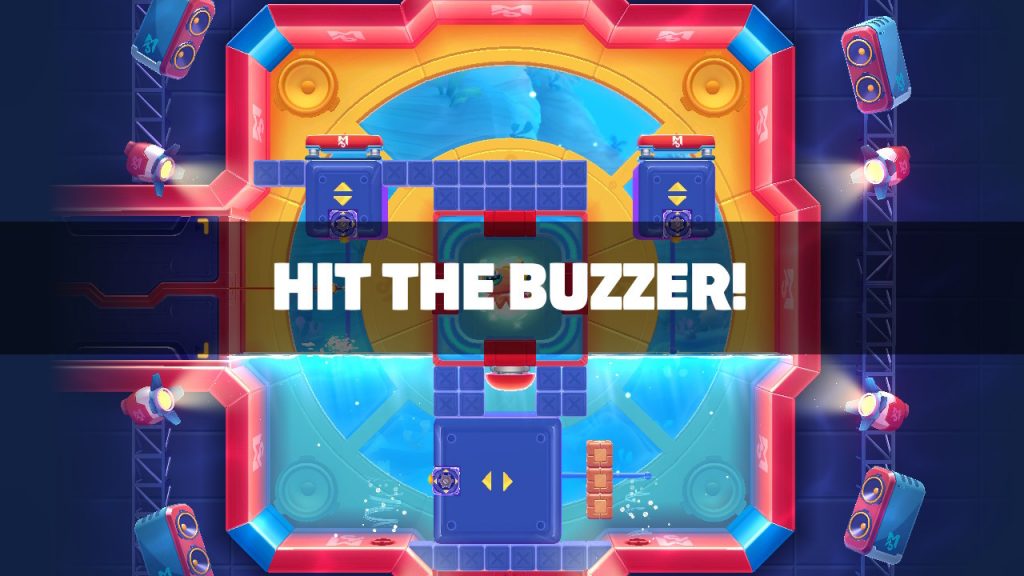 Each Arena is comprised of 3 parts – 2 challenges and one chase sequence. Challenges can range from destroying foes to pressing buttons to just surviving for a set period of time. The only given is that if a unique gimmick is present in the earlier part of the stage, it’ll also show up in that stage’s Arena. Luckily, you won’t be forced back to an earlier checkpoint if you fail one of these Challenges. Instead, you’ll just start that Challenge over from the beginning. Once you get past both Challenges, you’ll just need to catch the flailing Monomal, which will do its very best to swim away from you. No fancy techniques are required to catch them, just boost at the right time and try and corner them. Once you catch a Monomal, you can then use it in the MonoMaker to make beautiful music.

Mozart With the Most 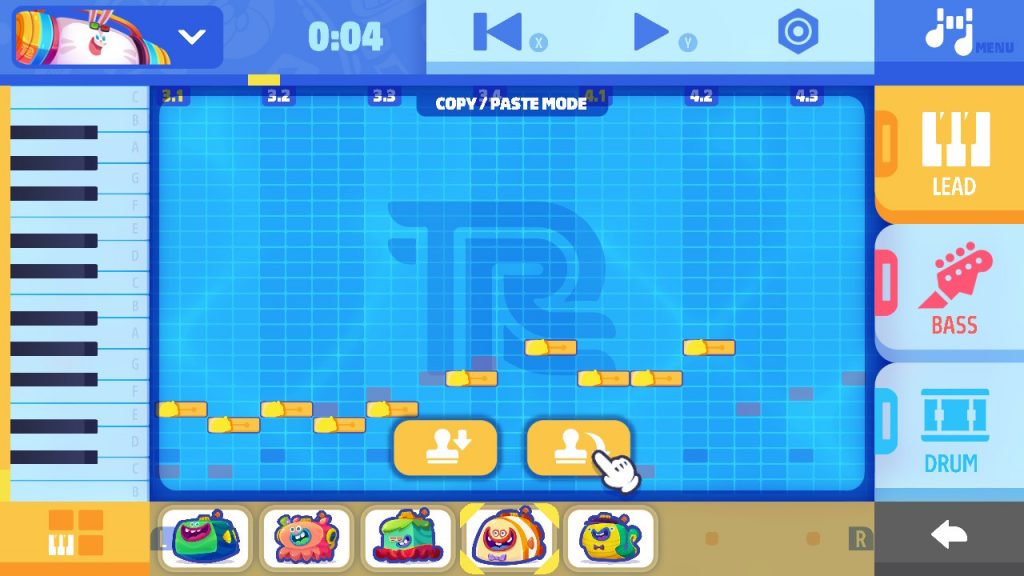 I love the idea of the MonoMaker. It’s structured a lot like Mario Maker, letting you place objects and then see how they interact. Except in the MonoMaker, the notes are the Monomals themselves, and each one has a unique sound. Additionally, using the same Monomal in different categories will result in a different sound. Those categories are the following – Lead, Bass and Drum. To place a Monomal, you just select someplace on the Piano Pool and press A. Then you can hold A to drag a box over multiple notes, which is helpful when you want to copy and paste a whole section of them. 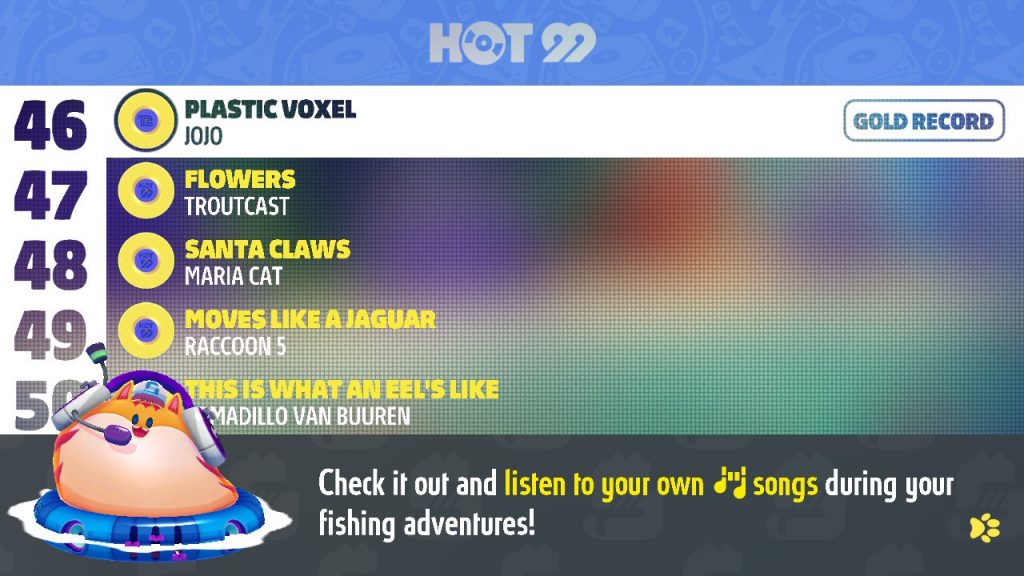 There’s a lot more to do in the MonoMaker, including looking at suggestions on musical composition. As someone that had zero musical education, I found this very helpful. I really wanted to do great things in the MonoMaker. I just found it a bit overwhelming. The UI isn’t the most intuitive, and you can’t read any in-game FAQ to recap instructions. Honestly, if this feature of the game was a lot more streamlined and easy to parse, Monomals likely would have gotten a nearly perfect score from me.

A Delightful Symphony of Music 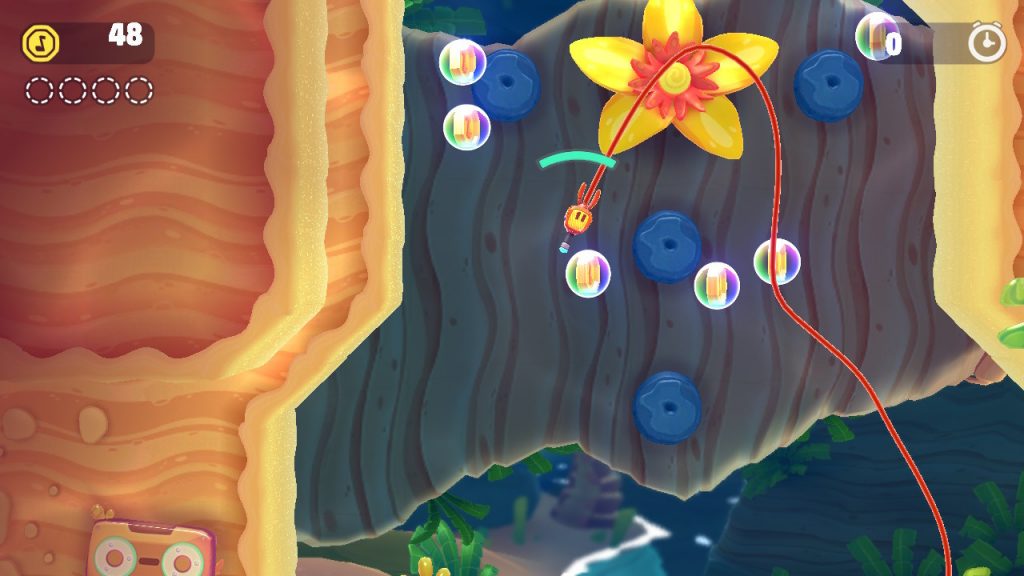 Visually, Monomals is a gorgeous and colorful game, full of cartoony ambiance. Mechanically and aesthetically, it almost reminds me of a weird mix of Sonic, Splatoon, and Rayman. Everything in the game is full of personality, and my only real complaint is that so many of the stage’s backgrounds look nearly identical. Mainly because most stages take place underwater. I’m honestly not sure how they could have improved this part of the game, but overall it’s minor. Musically Monomals is equally great, though the bulk of the music depends on how good you are at composing music in the MonoMaker before you upload it online.

Some Areas for Improvement 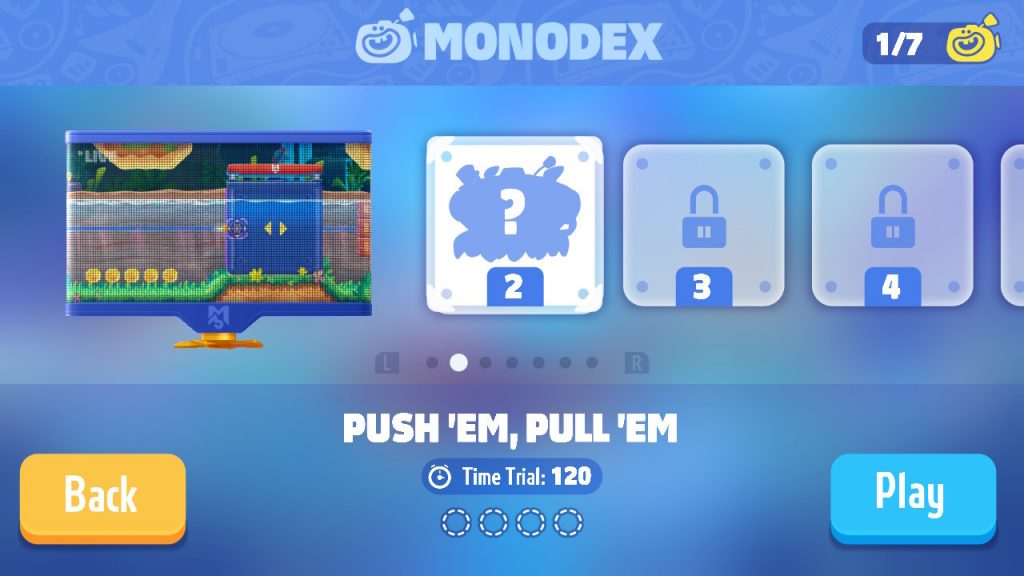 While most of Monomals was very well done, the following issues held it back somewhat. Firstly, I’m surprised the game didn’t have more of a narrative directing the action. Since the whole game is supposed to be about a musical contest with colorful DJs, this struck me as a misstep. And while I enjoyed how the platforming kept innovating and ramping up, I couldn’t shake a feeling the game lacks a sense of progression. It’s just one level after the next with no real stakes. 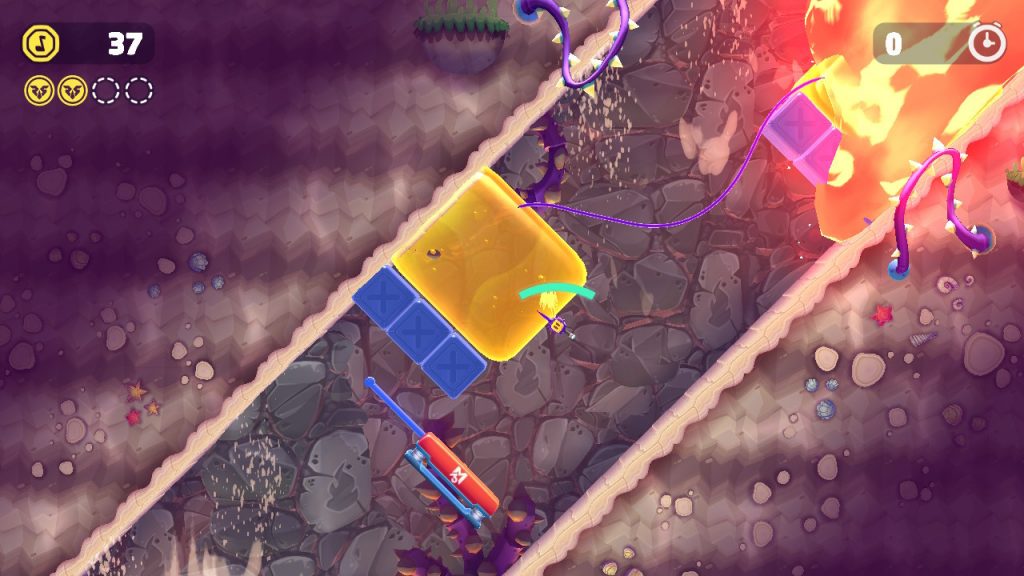 If you listen closely, you can hear my teeth grinding here…

Also, since there are 4 DJs in the game, it struck me as odd there was no mechanics to differentiate them. It feels like a missed opportunity not to have the Mono-Plugs for each DJ have a special move/mechanic. And lastly, while most of the stages struck me as pretty fair and balanced, one nearly made me rage quit. It’s a level full of rushing lava that will instantly kill you if you touch it. Additionally, that’s the only level where I encountered aggravating slowdown. Other than these small but noteworthy issues, Monomals is a very solid adventure.

Worthy of an Encore

Monomals definitely isn’t for everyone. The platforming is challenging, and the MonoMaker is a bit tough to figure out. But if you’re willing to put in the time to master both aspects of the game, then you’ll find one of the most impressive and creative titles I’ve played on my Switch in years. Add in tons of replayability, including collecting all the coins in each stage and optional time trials, and you have something truly worthwhile. Picomy continues to make incredible and creative games, and I can’t wait to see what they have up their sleeves next time!

Fatal Fury: First Contact isn't wildly ambitious. But if you're looking for a quick and dirty 8-bit fighter for your Switch, it does the job.