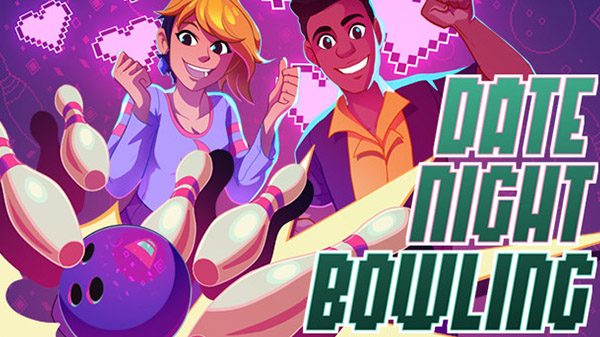 Date Night Bowling is a charming and stylish mashup of arcade bowling and dating sims, but there’s also a lot of missed potential.

The core concept of Date Night Bowling takes ten strangers and places them in a speed-dating scenario based on a shared love of bowling. Over the course of the game, players will be able to match up two of the ten playable characters for a game of bowling and build up their connection through a series of mini-games.

The arcadey style of gameplay for bowling is simple but solid overall. The bowlers are controlled with the keyboard to position and aim their shot, with a meter determining the power and spin. Each bowler comes with their own stats and adjustable factors like what hand they bowl with, how much lane oil they want to use, and the weight of the ball. Games are played across two neon-lit alleys with a retro aesthetic and synth-wave soundtrack which adds a lot of charm and style to proceedings. 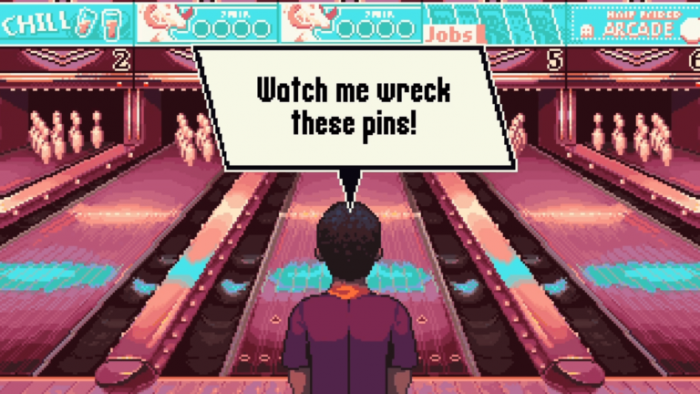 Characters are unlocked via single matches, which serve as a quick introduction to each bowler. Once they’re unlocked, they’re available for a date night bowl. These single matches are a good way to get some practice in and brush up on your skills, but being good at bowling doesn’t remotely matter in the grand scheme of things. The goal of Date Night Bowling is to build up enough chemistry with your partner that they’ll ask you out for a second date.

This is done through a wide variety of mini-games ranging from giving a shoulder rub to fixing a malfunctioning lane in the bowling alley. There are also fun rhythm-based games to show your date your best moves, or give well-timed jokes and compliments.  The mini-games capture the fun and excitement of a first date and often outshine the core bowling gameplay, once you get the chance to figure each of them out.

The mini-games are introduced at an almost rapid pace which may feel overwhelming to some players. There’s not a lot of time to get good at one game before you’re introduced to another with a totally different gameplay style. Restricting some mini-games to certain pairings could have served as a more steady introduction while adding uniqueness and character to each pairing. 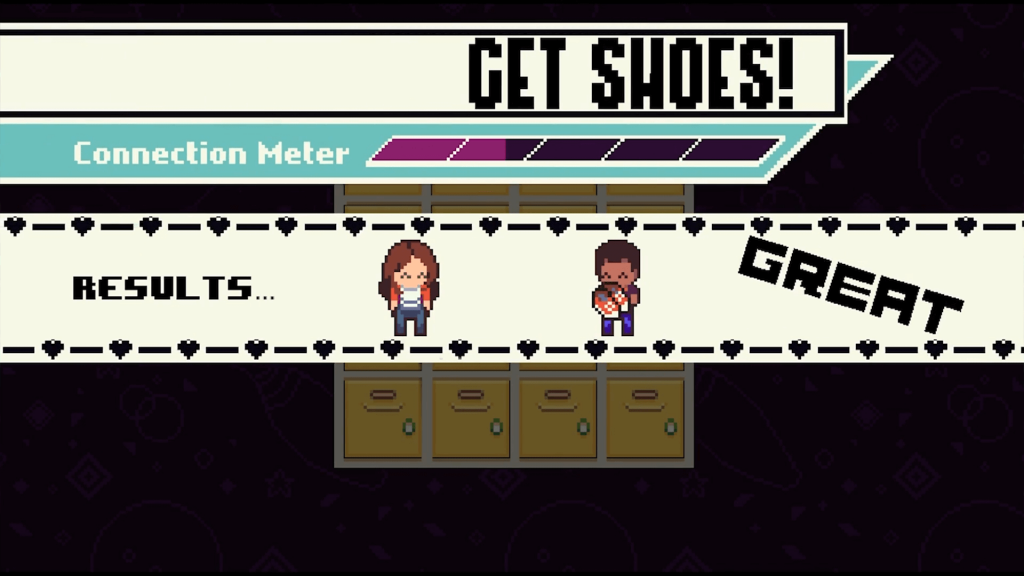 When it comes to characters, Date Night Bowling falls a little short. The game encourages you to play through to find out more about each of them, but we never really do. Despite the speed-dating premise, fans of dating sims may be disappointed with the lack of story. Each bowler is given a small bio once they’re unlocked, but their personalities haven’t been explored all that well in the game. They all have their own little lines to hype themselves up when taking a shot but seeing the same generic dialogue pop up countless times makes them feel unauthentic and like, well, video game characters.

If you’re able to look between the lines, then you will find some small details about each character, depending on their partner. This can come in the form of unique dialogue for specific dates, which encourages players to mix and match the ten playable characters. However, it is very minimal. 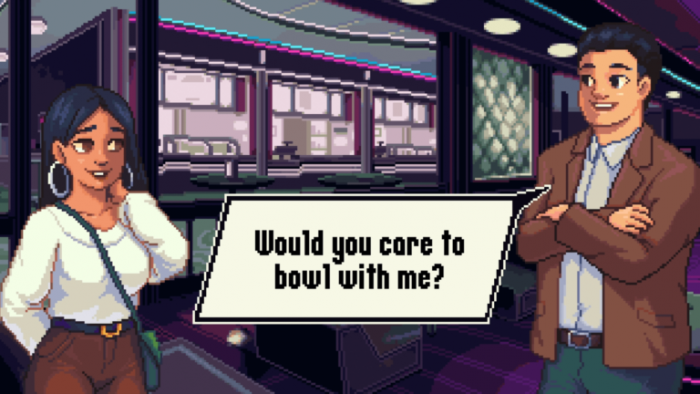 The chemistry meter is built up based on success with the mini-games, but it can come across as a little contradictory when two characters are matched up and are so clearly not into each other based on some of the dialogue. Every character potentially having good chemistry based solely on the success of the mini-games just feels a little cheap and quickly becomes repetitive.

If the dating-sim aspect doesn’t float your boat and you’re feeling competitive, then the casual bowl mode is for you. This removes the mini-games entirely and is simply a competitive bowling game between the two characters. You have the option of playing against the AI or another player in a local match. The two-player option extending to the date night bowl mode gives the sense that Date Night Bowling is a game about couples for couples. The core bowling mechanics and a wide variety of mini-games can serve as a fun past-time for you and your significant other.

The paper-thin narrative and characters may leave some underwhelmed, but ultimately Date Night Bowling does its job as a fun, cute, and stylish mash-up of genres. It’s a short and sweet experience that will no doubt have you smiling with its charming collection of mini-games, along with the solid arcadey bowling tossed in for in good measure.

Full Disclosure: This review is based on a PC review copy of Date Night Bowling provided to Hey Poor Player by the publisher