Tell Me There’s a Jar of This Somewhere 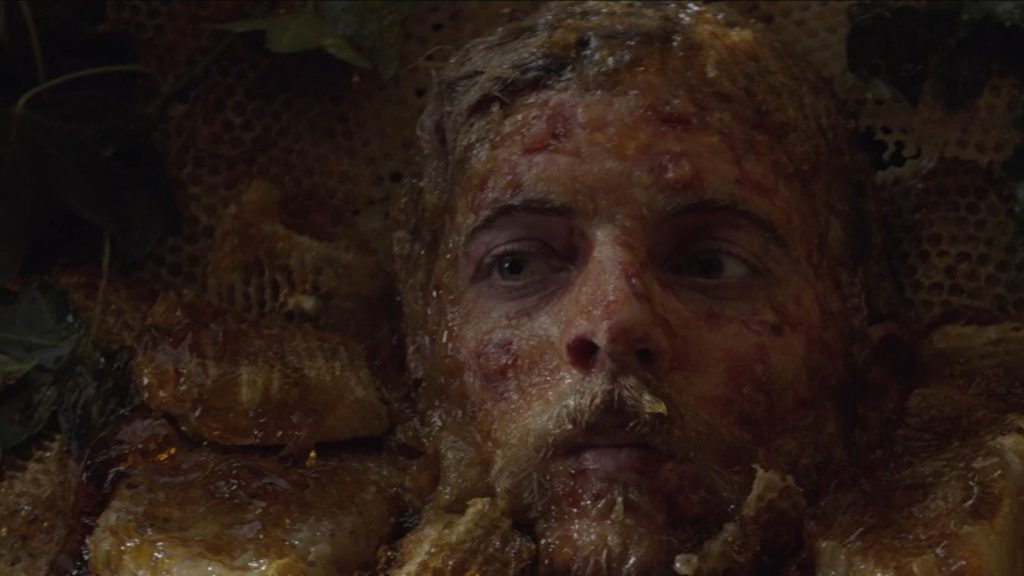 I’ve been waiting for an episode this good since the start of Batwoman Season 3. I don’t know what it is about episodes where all the loose plot threads start coming together, but How Does Your Garden Grow? was an utter delight. It not only clarified the many issues that were left unexplained, but managed to do so while introducing a dangerous new threat to the Bat Team. Everything starts calm in an idyllic setting. Some women are playing soccer in a park, and the ball goes rolling off. When one woman follows it, she finds a shed with an odd stain coming from underneath the doors. To her utter horror, inside is a man turned into a living bee hive. Which means one thing and one thing only – it’s finally time for Poison Ivy in Batwoman Season 3!

Montoya is called to the scene, and after dealing with small minded sexists she has the victim taken to Mary’s clinic. She coordinates with Ryan and the gang, and reveals there has to be a new host for Poison Ivy. Ryan was completely in the dark, but sneaky Alice knows what’s up. And quick side note, Rachel Skarsten is fantastic in this episode, with more hilarious banter than I can recount. She and Ryan share some snarky quips, but Ryan is mostly irritated to just now hear about a resurgent Poison Ivy. Even Montoya doesn’t know that Alice suspects the new host is Mary.

Though I never thought of Poison Ivy as a host, I’m glad for the tweak here. It lets the episode delve into a series of horrific plant-based attacks, and brings lots of drama to Montoya, since she used to date Pamela Isley. And honestly, a Poison Ivy that can infect new hosts is a pretty scary concept, and it’s used to tremendous effect here.

Ryan goes to decrypt the victim’s phone while Alice goes to hang with Mary. She tries to tease the truth out of her step sister, first subtly then in her face. Mary thinks Alice is going crazier, and refuses to see the truth. At least until the victim opens his eyes, sees Mary, and starts screaming for help. When his phone is unlocked, they find him and Mary had been in communication via a dating app before he was turned into a honey farm.

The episode also focuses on Sophie and Ryan’s deteriorating friendship. She wants Ryan’s help finding the BGS member who froze her sister, but Ryan isn’t willing. She says Jada is innocent of trying to hurt anyone. In truth, she’s trying to protect her brother’s secret, and it’s going to cost her dearly. Sophie goes to Montoya instead, and cajoles her into handing over everything she has on the Black Glove Society. Montoya warns her that those that look into them end up dead, but Sophie isn’t deterred.

I Am a Threat to Everyone 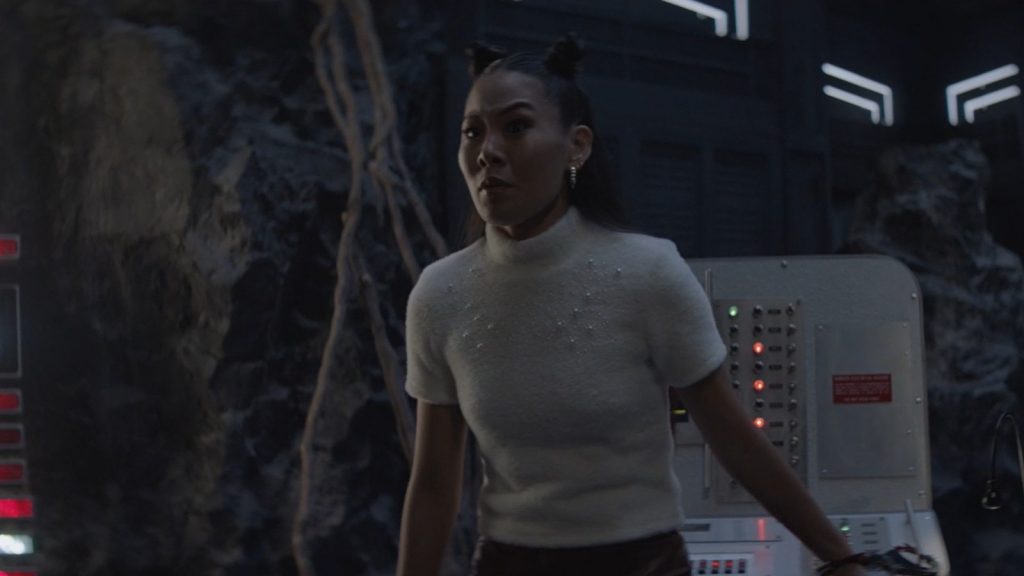 Back at the Bat Cave, Mary warns everyone what she’s afraid is happening. She recognizes new patterns like collecting plants and drinking tons of water, and chains herself up to protect everyone. Then the Bat Team finds another clue that leads to another victim, this time a man buried up to his head in potting soil. It’s none other than the BGS member that Sophie has been hunting, Virgil. Apparently he’s dug up and secured under Wayne Tower, until Batwoman can deal with him. She just doesn’t want to tell Sophie about him, cause she’s determined to keep Marquis’ secret.

Please Don’t Tell Me I Hurt Anyone Else 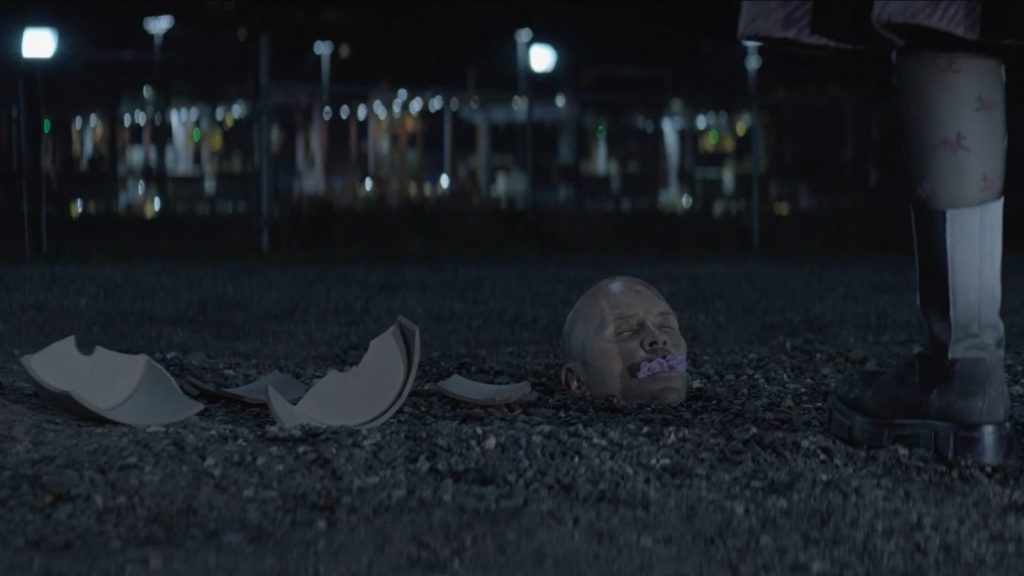 All of the new Ivy’s victims seem to be getting karmic justice for slights against the new host. Alice is convinced it’s Mary, and loves the idea of a villainous step sister. What they can’t figure out is what triggers the Jekyll/Hyde transformation from Mary into Ivy. Meanwhile, Montoya comes calling at the Tower, eager to find the new Ivy. Ryan tries to protect Mary, and tells her to leave. But then Alice complicates things. 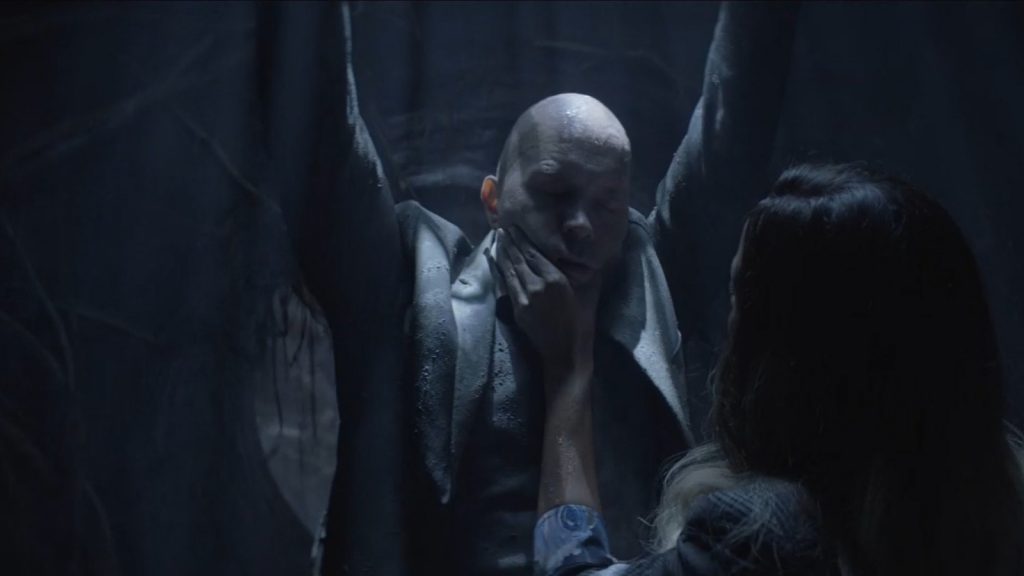 Turns out, she told Sophie about the man chained up under Wayne Tower, and Sophie starts burning the truth out of him with a blow torch. Ryan intercedes, but in the process Virgil kills himself with one of his chains. And then Mary transforms into Ivy, and knocks Luke out. Turns out, the trigger from normal Mary into a plant-based goddess is none other than sunlight. Which Alice successfully guessed, and did everything she could to buy time until the change happened.

You’ve Been So Caught Up In Your Own Drama, It’s Time You Get Caught In Mine 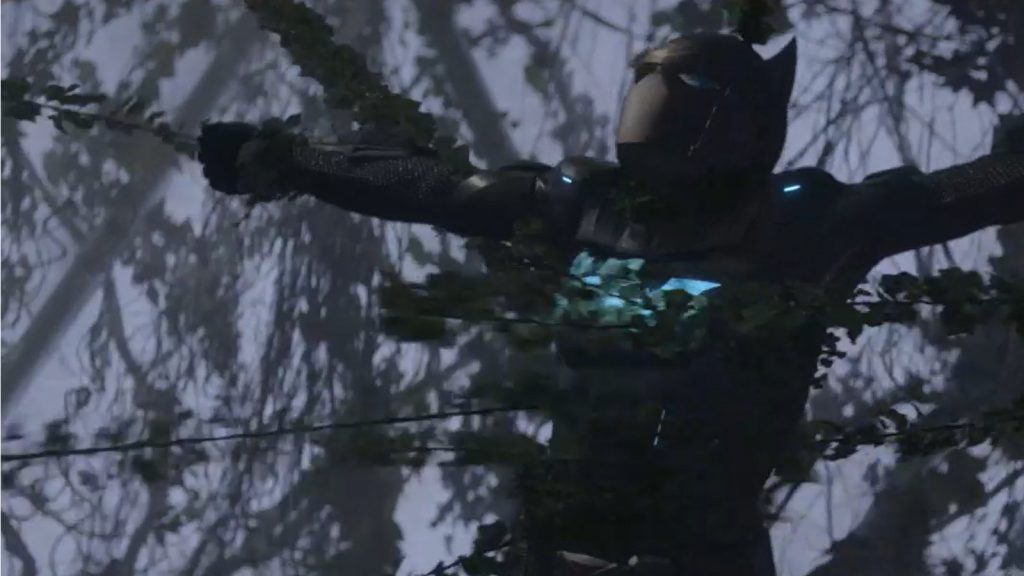 Poison Mary then lures Montoya to a botanical garden to deal with her. When Renee realizes what’s happening, she’s promptly dealt with. And when Ryan and Luke go to save her, they get taken down by vines as well. As Batwing, Luke is badly hurt, but things get much worse. His failsafe isn’t working, and he gets fully entangled by vines. Mary confronts him and reveals she removed his failsafe, but she’ll find a great use for the AI that powered it. Luke is in danger, but Ryan manages to cut him free, moments before the cops arrive. Mary then traps her in vines and escapes, forcing Montoya to cut her free. Suffice to say, Montoya’s not happy she wasn’t informed of the team’s suspicions.

It ends with Ryan and Luke guilt ridden over having missed all the signs that something was wrong with Mary. And shockingly, Montoya and Sophie hook up. Which means I’m officially done shipping people, since this show loves to prove my guesses wrong. And just to make things worse, Alice and Poison Mary are going on a road trip. It’s all shaping up nicely for the mid-season finale, and I hope Batwoman can keep the flow going. I loved how all of Mary’s resentments boiled over and were amplified by her new superhuman powers. It’s just a question of what her ultimate goal is, and whether the team can cure her. Find out next week by tuning into HPP’s continuing coverage of Batwoman Season 3!