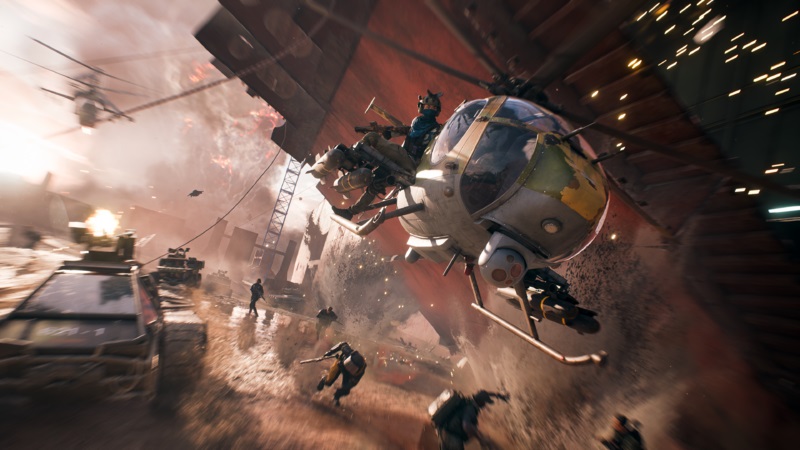 The latest installment in EA and DICE’s long-running shooter series, Battlefield 2042, aims to take the action in a bold new direction. Leaving behind the historical settings of Battlefield 1 and Battlefield V, the game transports players to a dystopian near-future world where catastrophic climate change has ravaged the earth and loosely-knit groups of climate refugees known as non-pats duke it out in skirmishes across the globe. It’s a dreary setting, for sure. But it’s perfectly suited for the explosive action that Battlefield 2042 seeks to deliver, pitting more soldiers than ever before against each other as they traverse a broken land, wield sleek near-future weaponry, and even battle it out amid raging storms that now ravage the planet.

The Battlefield series has always been known for its epic encounters, where teams of dozens of soldiers battle for supremacy across sprawling maps while taking advantage of a wide variety of weapons and vehicles. And, as you’d expect, Battlefield 2042 is no exception, turning the dial to 11 by delivering larger-scale conflicts than ever before – at least on current-gen platforms. So while PS4 and Xbox One players will once again get the chance to wage war in 64-player battles, those playing on the Xbox Series X, PS5, and PC can experience the pure carnage with a whopping 128-players.

With twice the combatants running amok across the map, Battlefield 2042‘s gunfights feel much more kinetic than ever before. During my early time with the game at a review event hosted by EA and DICE, a follow reviewer and I both remarked that the chaos unfolding on-screen during our first round of Breakthrough gave us serious Star Wars vibes as countless soldiers and tanks filled the screen and bright orange tracer rounds illuminated the warzone. It was utterly exhilerating. And now, after spending roughly two weeks with the game before writing this review, the spectacle these player-packed matches brings to the table remains just as impressive. 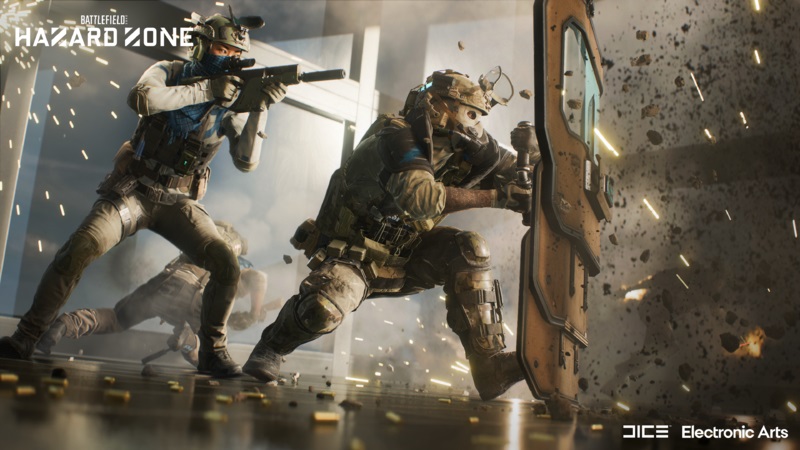 Of course, the increased player count isn’t the only significant change in store for players. Battlefield 2042 has radically turned the series’ established class system on its head this time around. Gone are the familiar, clearly-defined roles like Recon, Assault, Medic, and the like. Instead, you’re now able to choose from ten Specialists, each equipped with a unique gadget and traits. So, for example, Boris can deploy an automated sentry gun to chew through invaders. On the other hand, the ghillie suit-clad Casper can deploy a drone to scout out enemy locations and even emit an EMP blast to knock out enemy vehicles. Other specialists can do things like use grappling hooks to deftly get around the conflict zone or even deploy a massive riot ballistic shield – perfect for when you’re laying down suppressing fire.

I like the idea of the Specialists on the surface. But, unfortunately, the way they do tend to make Battlefield 2042 feel a bit less cohesive than its predecessors. Because without pre-defined classes, players can now choose to mix and match whatever weapons and gadgets they choose. And, as a result, your squad members are much less likely to have clearly defined roles that you can strategize around. Of course, if you’re squadding up with friends, then this likely won’t be as much of an issue. As fun as the new Specialist-specific tools can be to utilize on the battlefield, I have to admit I found myself eventually missing the more clearly-defined roles found in previous games. But given the popularity of the Hero Shooter genre these days, it’s hard to blame EA and DICE for wanting to give the game’s typically faceless grunts a bit more personality in this latest installment. 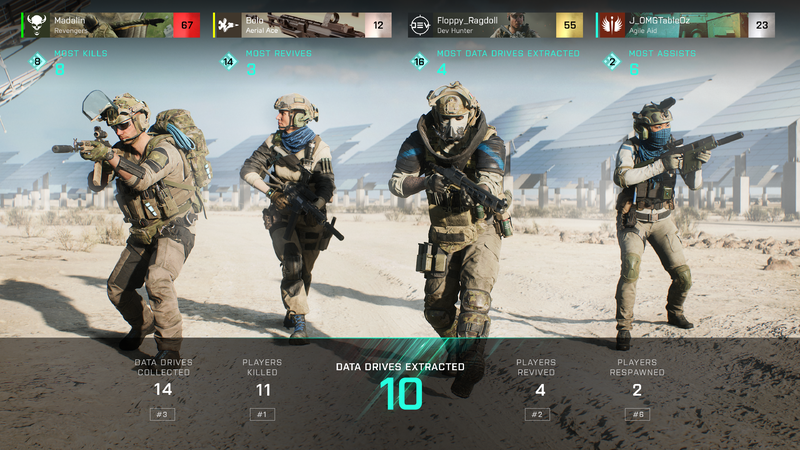 As you’d expect, fan-favorite modes like Breakthrough and Conquest return and will most likely be where most players spent the bulk of their time in Battlefield 2042. However, they’re joined by two new game types this time around: Hazard Zone and Portal.

Hazard Zone is a new 32-player game mode where eight squads of four players compete to collect as many hard drives as they can from crashed satellites and escape before an enormous storm obliterates the map. This mode emphasizes coordination with its much smaller teams and respawns limited to when your team collects a particular item. If your team successfully exfiltrates with any data drives, each player will earn Dark Market Credits to buy new weapons and gadgets to assist on your next run.

With its higher stakes and the constant threat of a raging storm wiping out your squad, Hazard Zone certainly has its moments. But, unfortunately, it can also feel like a bit of a slog at times. This problem is mainly because Hazard Zone uses maps from the All-Out War mode, so you’ll often find yourself trudging across large swaths of the environment without encountering much resistance. The game does try to compensate for this by inserting gangs of AI troops into the mix, but they don’t quite do enough to make Hazard Zone live up to its full potential. Still, it’s fun in short bursts and could eventually be a hit with the addition of new maps that feel like a better fit for this particular game type.

While Hazard Zone is a bit of a mixed bag, Portal has the potential to be an absolute game-changer for the Battlefield series. This versatile suite lets players create their own game types using assets and maps from Battlefield 2042, Battlefield 1942, Battlefield: Bad Company 2, and Battlefield 3. This feature opens the door for some hugely entertaining scenarios. Want to create a game type where the only weapons are knives and defibrillators? Have at it! Curious to see if the Nazi forces from BF1942 can compete with the high-tech commandos found in Battlefield 2042? Well, you can do that too.

During HPP’s review event, one of the game’s lead developers whipped up a hilarious game type where players’ only weapons were anti-tank rockets. The kicker? You only have one round, and the only way to replenish your ammunition was to jump five times. This mode delivered some hilarious moments as players lept around the arena like methed-up monkeys in a desperate bid to replenish their ammo before an adversary could ram a rocket down their throats. Suffice it to say, I loved every second of it.

Of course, there’s a bit of a learning curve for creating your own game type. Portal uses a web-based drag and drop visual UI similar to Scratch. But with a little bit of practice, you should be able to whip up the game mode of your dreams. I genuinely can’t wait to see what the community produces in the coming months. And if you don’t feel like putting in the work, that’s no problem. You can simply hop on and experience other players’ creations instead without any need to dig into the nitty-gritty. 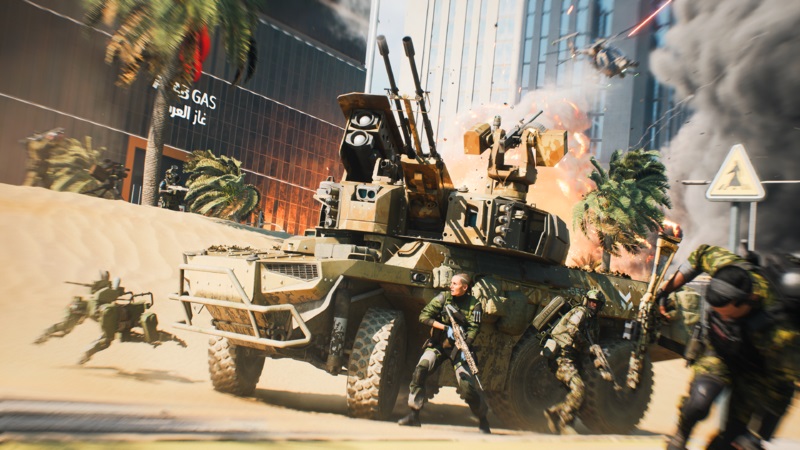 Whether or not the new modes appeal to you, one thing’s for sure: waging war in Battlefield 2042 is an absolute blast. The satisfaction that comes from sending a bullet crashing into the forehead of an enemy sniper from over a mile away or wiping out an entire tank crew with a well-placed satchel charge feels as good as it ever has. And new features, such as the various Specialist abilities along with the all-new Plus System, which allows you to modify your weapon upgrades mid-battle, make the combat feel more versatile than ever before. That said, if you’re a fan of the previous games, you’ll likely love what Battlefield 2042 has to offer.

But that’s not to say the game is perfect. Between ramping my hovercraft over sand dunes in daring raids Qatar and navigating mazes of cargo containers with my squad of crack commandos to stealthily overtake a control point in Singapore, I also had to battle some connectivity issues during my time with the Xbox Series X version of Battlefield 2042. Thankfully, these were generally remedied by just closing the game and relaunching it, but sometimes the connectivity issues could persist for considerably longer, which was disappointing. However, it’s worth noting that this was during the game’s pre-release period. Here’s hoping by the time you’re reading this that your battles unfold without a hitch.

Another issue I consistently experienced was the tendency for the kill cam to clip entirely through the bottom of the map. It’s a small thing, but it happens pretty often, making it very difficult to see where your attackers were even firing from. It’s worth noting that this never occurred during my 12 hours spent with the PC build before the Early Access period.

Something Worth Fighting For

While not all of the features Battlefield 2042 introduces are a hit, and the lack of a single-player component is a little disappointing, the game still manages to deliver the same spectacular skirmishes fans of the series crave with its explosive 128-player conflicts and satisfying selection of near-future weaponry and gadgets. Add to that the impressive Portal Mode, which has the potential to keep a steady stream of community-created content flowing, and Battlefield 2042 could very well keep your itchy trigger finger soothed for the foreseeable future.

Whether you’re a longtime fan of the franchise looking to dominate the leaderboards or a greenhorn ready for your first tour of duty, Battlefield 2042 delivers something worth fighting for.

Full disclosure: This review is based on a review copy of Battlefield 2042 provided by the publisher.