He doesn’t call himself “Fury Incarnate” for nothing! 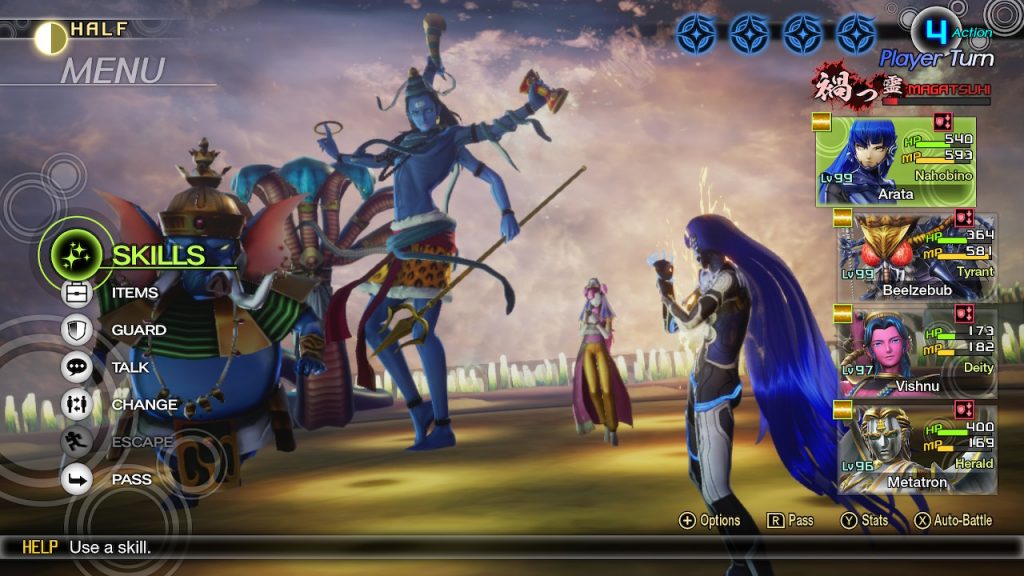 Shin Megami Tensei V is packed with powerful bosses that are just waiting to test the player’s strength and capacity for strategy. However, despite how difficult some of them can be, none are as tough as Shiva. Standing tall as SMTV‘s superboss, Shiva is unfathomably powerful—putting even the normal endgame bosses to shame—and requires both an equally powerful party and strategic insight in order to properly take on. Fortunately, after a bit of trial and error, we here at Hey Poor Player finally managed to destroy the destroyer of worlds—and we’re here to give you some tips on how you can go about doing the same!

Before getting into the guide, however, there are a few things that I’d like to make clear: 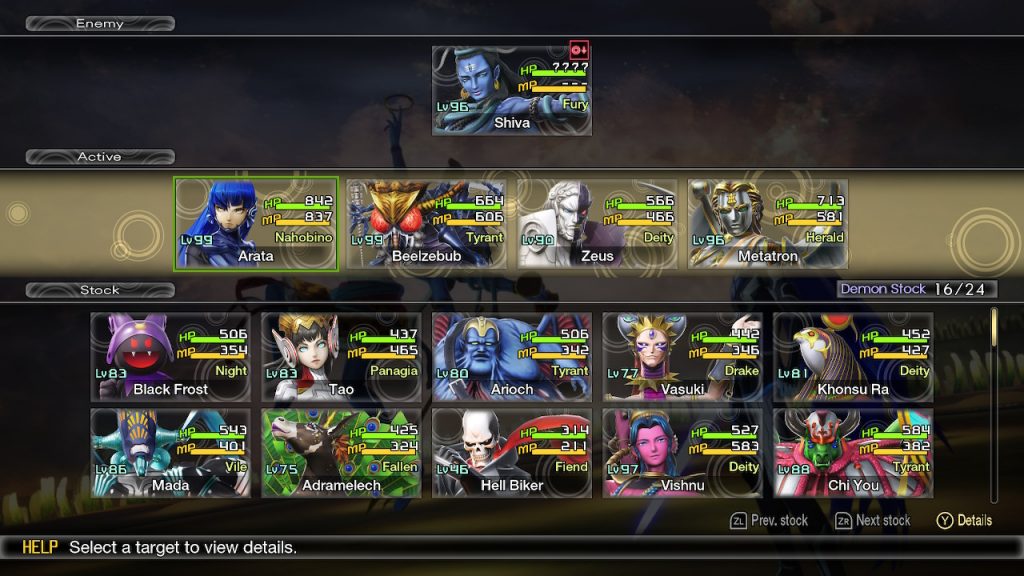 While there is no “correct party,” in SMTV, the demons that you’ll need to bring with you do have to be capable of several things. The ability to block, reflect, or drain multiple elements is a must for your party, and it’s incredibly important that no one in your party has any actual weaknesses. Shiva already hits hard enough, and granting him bonus damage and additional Press Turn Icons isn’t going to do you any favors. Shiva also boasts a single weakness, Ice, so make sure that you have a few heavy-hitting spellcasters at the ready.

For the sake of clarity, I’m going to detail the team that I actually ended up winning with. Ultimately, I ended up using four different demons throughout the battle—Beelzebub, Metatron, Zeus, and Vishnu. I also used almost all of the stat and affinity-boosting items that I had saved throughout the entire game on these demons, and I suggest that you do the same. Finally, I suggest that you make sure that you slap Enduring Soul onto as many demons as possible, and also pick up a Whittled Goat to save the Nahobino’s skin. Trust me, second chances are great in a situation like this. Enough of the basics, though, let’s take a look at a party composition example! 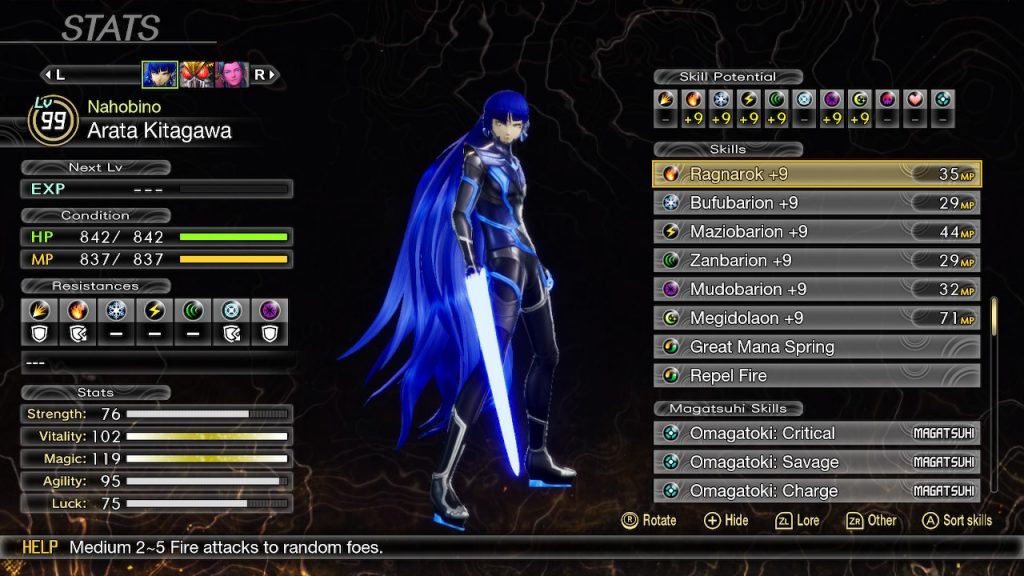 Serving as SMTV‘s protagonist, the Nahobino has the ability to be anything that the player would like—and, if you’re looking to bit Shiva, I’d suggest making him a bulky spellcaster with high-level Ice and Dark spells. Also, Physical immunity is helpful, as they’re doled out relatively frequently. 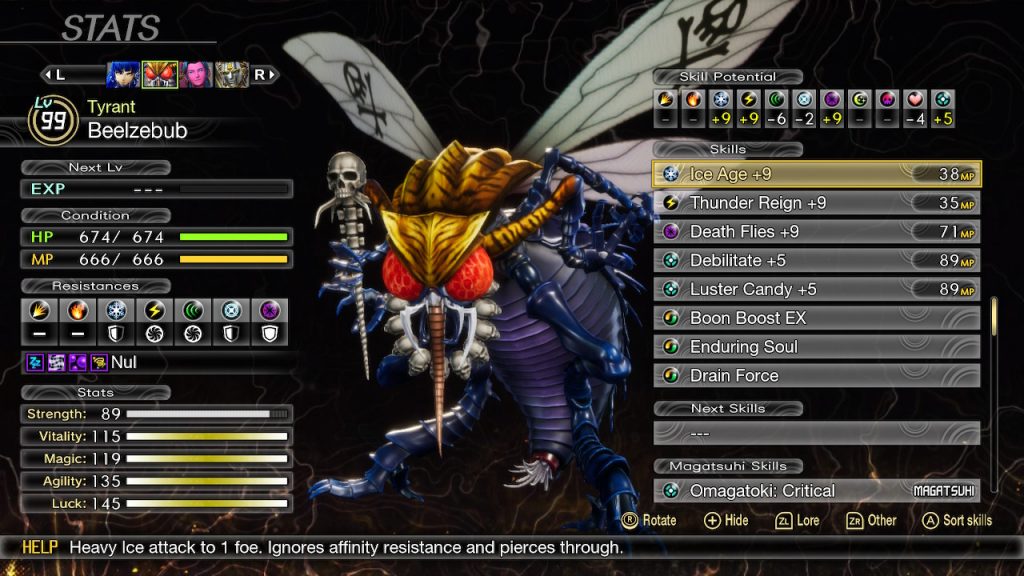 MegaTen‘s resident Lord of the Flies is one of the highest-level demons that you can get in this game, and it’s not hard to see why. Boasting an impressive amount of resistances and only a single weakness (Force), the incredibly important Boon Boost EX passive skill, and an extremely powerful AoE Dark Magic skill in Death Flies Beelzebub makes a phenomenal mixed attacker/supporter. Just be sure to throw Chakra Pots at him (and anyone else, really) whenever his MP starts to get low! 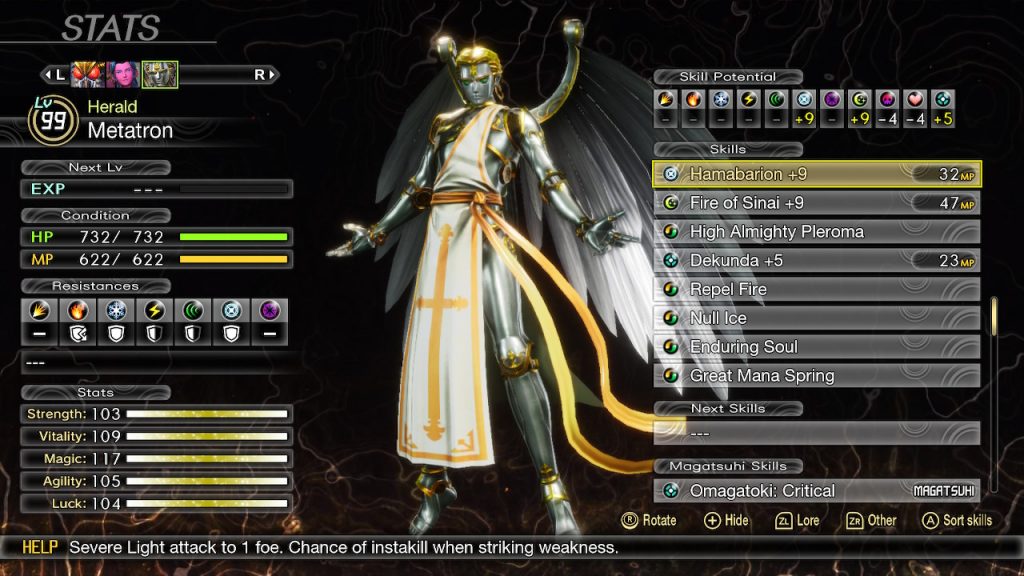 Metatron may spend most of his time ensuring that God’s word is law, but, if you fuse him, he’ll be sure to take time out of his busy schedule to help you out—what a guy! Metatron boasts both excellent offense and defense, plus a lot of innate resistances, meaning that you shouldn’t have to worry about him quite as much as you will your other party members. He also has the Magatsuhi Skill God’s Shield, which reduces all incoming damages to about 10% or so (I haven’t actually done the math, so don’t quote me on that) for the next turn. Ironically, despite his capabilities, Metatron’s main focus in my party was to cast Dekunda whenever Shiva reduced my party’s defense (which he does a lot). It doesn’t really matter how you get rid of the debuffs, just make sure that you fix debuffs ASAP. If not, you’re probably looking at a total party wipe the next turn. 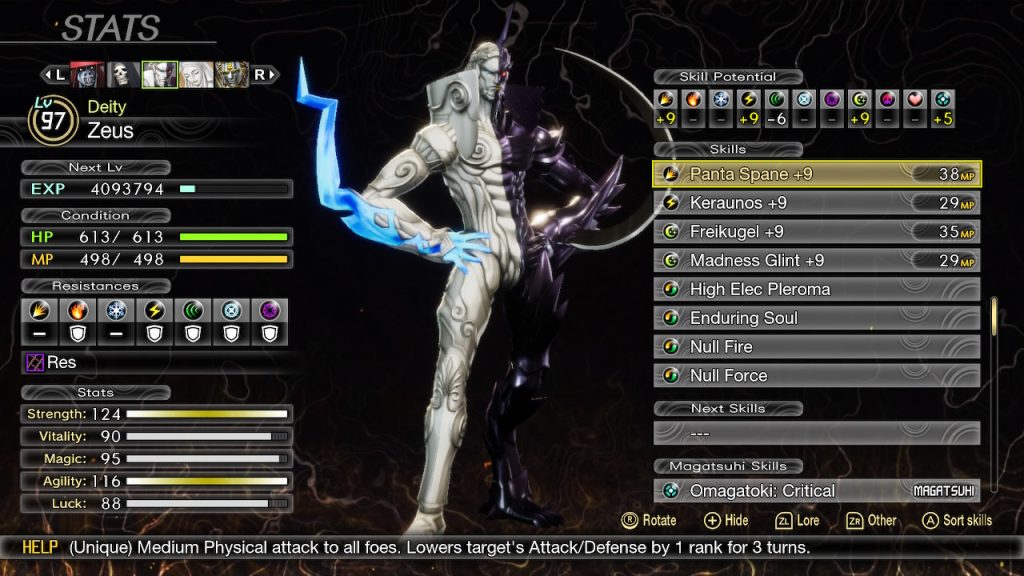 Compared to the first two demons, Zeus wasn’t quite as specialized for me. I mainly had him there to deal out some heavy damage in the beginning, and test my luck with Madness Glint—because, surprisingly, Shiva is not immune to all status effects. Ultimately, however, I ended up switching him out partway for the next party member, Vishnu. 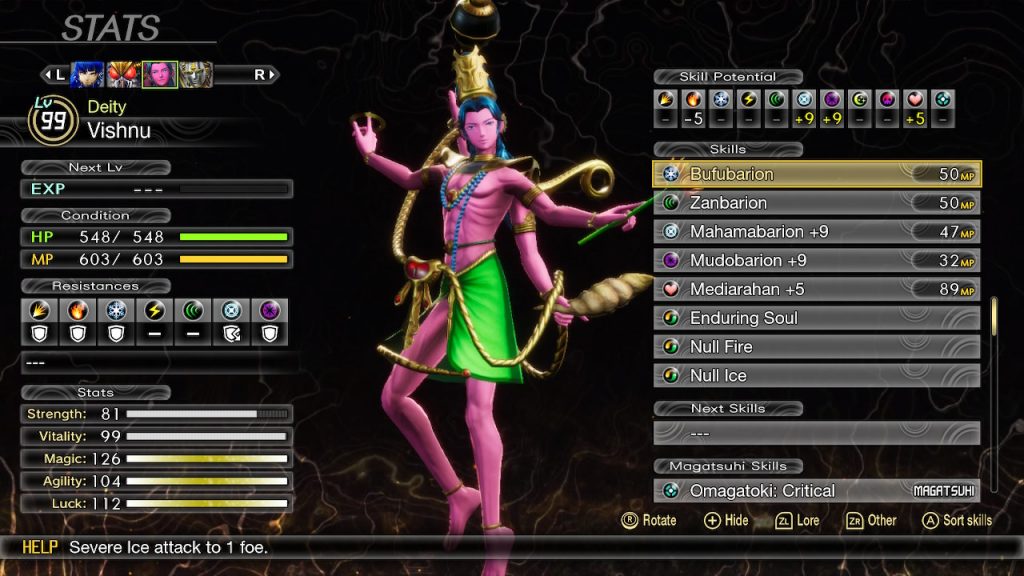 It felt a little ironic using Vishnu to help bring about the destruction of Shiva, but this series is no stranger to blasphemy—and if you’ve gotten all the way to the Siva boss fight then you should be pretty used to it by now, too. Taking the place of Zeus partway through the fight, Vishnu’s primary responsibility was keeping my party healthy with Mediarahan and throwing Ice and Dark spells as necessary. Vishnu was also largely responsible for using items as necessary, with Metatron occasionally picking up the role as well. On that note, make sure your inventory is fully stocked, and don’t be afraid to use whatever you need whenever you need it! Outside of the Demi-Fiend, which is a DLC boss, you’re not going to come across anything that even comes close to Shiva in terms of difficulty. 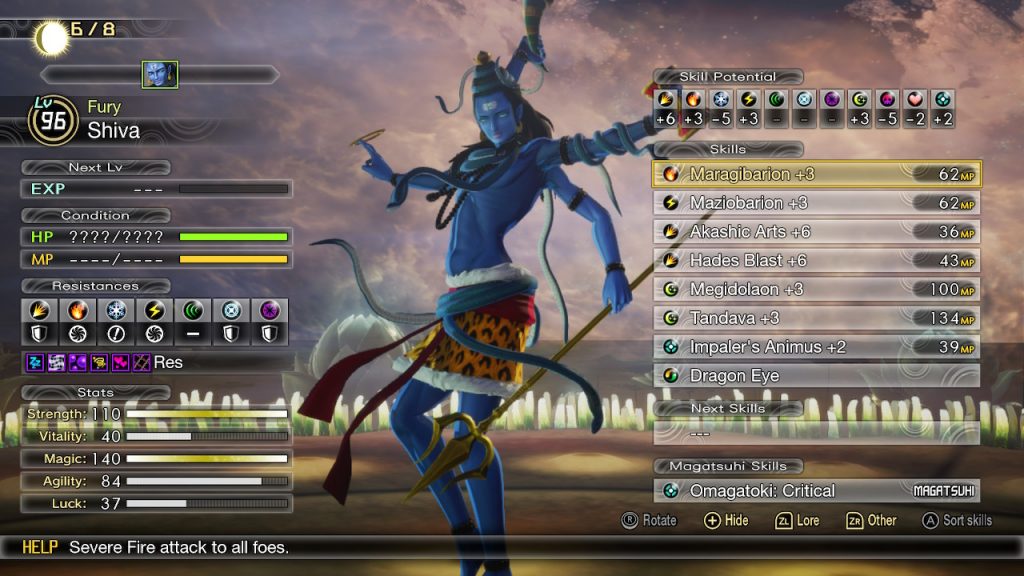 Lookie, there, I saved you a Spyglass!

Now that we’ve taken care of party composition, let’s jump into the actual fight with Shiva. Shiva will always do the same thing during his first turn. First, he will use Tandava—an attack that inflicts severe AoE Almighty damage and drops the defense of those hit down to the absolute minimum. And, in case you were wondering, no, you can’t mitigate the defense drop by buffing your own defense preemptively. Following the attack, he will use Summon Allies to call forth two of his pals—Kali and Ganesha. I’d suggest taking care of Kali first with Ice attacks, as she is immune to Dark, while Ganesha is weak to Dark. After killing Kali, you can then spam Beelzebub’s Death Flies until Ganesha’s dead, too.

Following the first turn, which is scripted and therefore very predictable, it’s going to be up to you to stay on your toes and be prepared for whatever Shiva and his teammates throw at you. There are, however, a handful of tips that I can give you:

A Godslayer in the Making 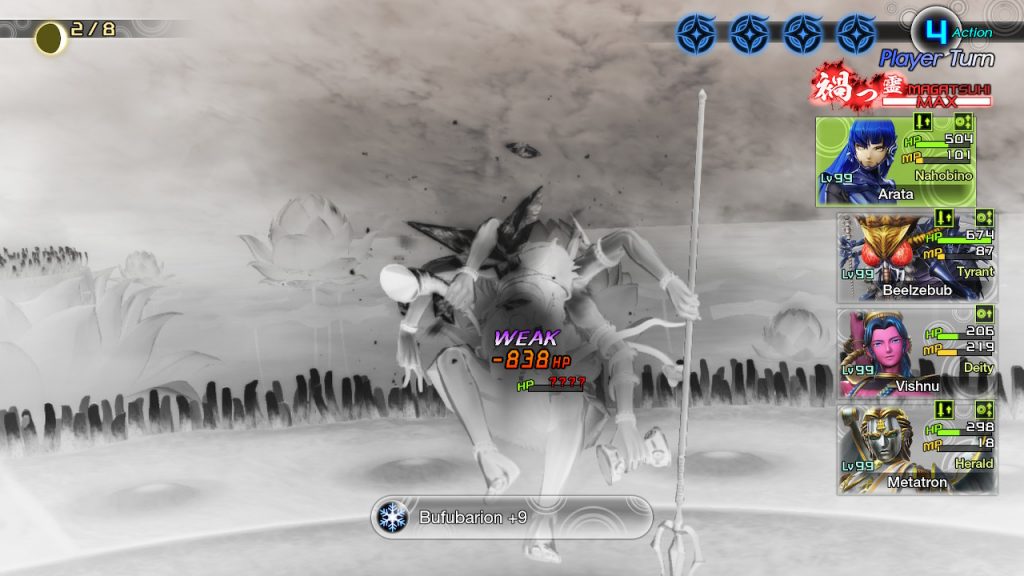 Well, that about does it for HPP’s guide on how to beat Shiva in Shin Megami Tensei V. Did you find any of the information helpful? Let us know! Do you have any additional tips? Let us know those, too! Either way, we hope to hear from you. And, of course, best of luck taking down Shiva! 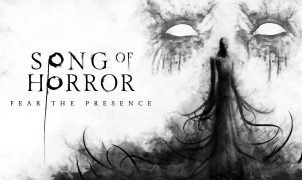 Song of Horror Review: Scary for the Right Reasons, Scary for the Wrong Reasons     I love horror games. I’ve been playing them for as long as I…