Evertried Review: Nowhere to go but up 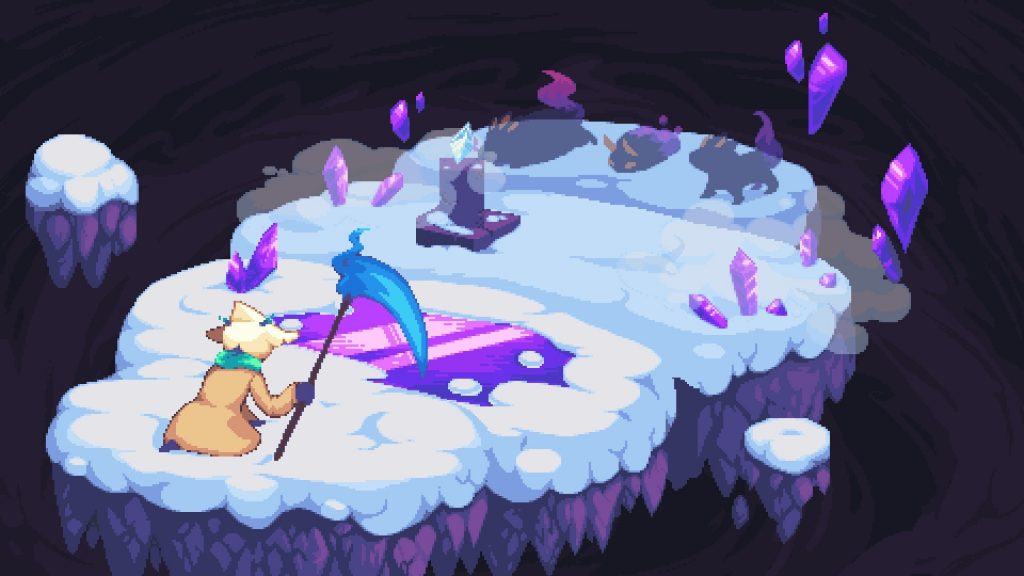 Oh good, you’re awake — if you can call whatever this is “awake” that is. Can you remember who you are? What happened? No? Okay well, you’re dead. Sorry to break the news to you, but you’ve crossed over, the only hint of your previous life being that weapon that lay at your feet. Perhaps you were a warrior in life? Well, whatever you were, I propose you pick that weapon up and wield it, as you’ll surely need it. You see, you’re something of an anomaly — one of those souls that are too hard to pass judgment and either enter heaven or the depths of hell. Take up your arms and prove your strength as a warrior as you ascend this otherworldly tower; succeed and you will be granted access to the afterlife. Fail… well, you don’t want to fail.

So begins Evertried, a successfully Kickstarted turn-based isometric roguelite developed by Lunic Games / Danilo Domingues and published by DANGEN Entertainment. Available on Steam, Switch, PS4, and XBox One for $19.99, Evertried asks players to “make clever use of attacks, movement, skills and hazards to clear floors of enemies and advance higher toward their destiny.” And with predominately positive journalist and user reviews, it’s clear that Evertried’s lofty goals have been attained. 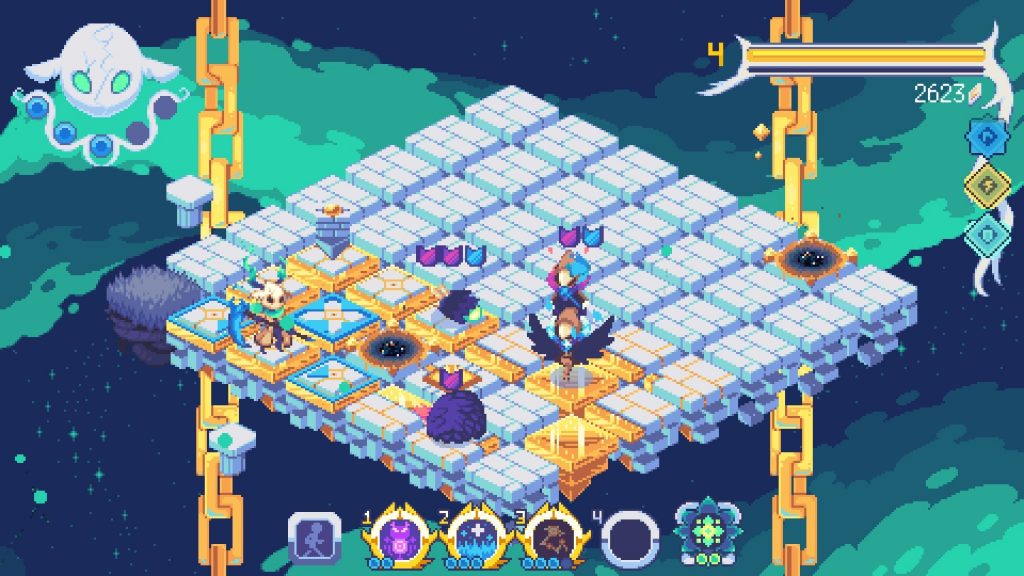 If you’ve played any roguelike or roguelite before (or, you know, Rogue itself), you’re already halfway there in terms of understanding Evertried’s mechanics. However, there’s a catch: where the majority of titles in the genre are often dungeon crawlers hacking and slashing their way downwards into the depths of the… well, dungeon, Evertried asks players to go in the completely opposite direction: up. Up, up, up the tower — through varied enemies, dangerous environments, and distinct boss battles — and into eternal deliverance, where a heavenly afterlife awaits worthy players.

To continuously ascend this ethereal tower, players will need to clear each of the 50 floors of enemies before proceeding to the next floor. The enemies vary depending on the area (5 in all), but all of them share a common thread: they plan their moves around yours. You might move towards an enemy, only for it to run away. Perhaps another enemy will charge in kind, taking advantage of your close proximity to strike. Maybe you’ll try to get ahead of the enemies by dashing across the blocks two at a time. This careful dance of moving, dashing, and attacking as quickly or as slowly* as the player desires becomes the core element of Evertried’s gameplay, each level building upon the last.

*you can’t go like, Final Fantasy X slow, but it’s not exactly Hades fast either. 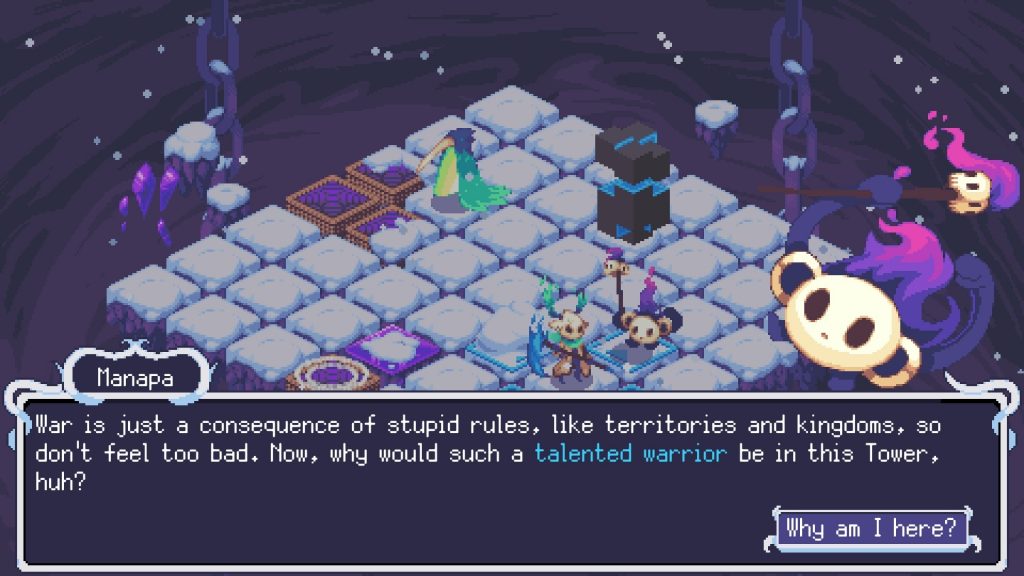 More on that game speed — Evertried’s turn-based, tactical gameplay coupled with enemies attacking *after* you might make it seem like you have all the time in the world to strategize, but the truth is a bit more complicated. There’s a focus meter that slowly drains in the top right corner between attacks, and — you guessed it —  you definitely don’t want that meter to hit zero, as you’ll lose all your collected EXP. So while you don’t need lightning-fast reflexes to power through these floors, it’s critical to stay focused to keep the momentum going. And with several different enemies with different fight patterns coupled with environment that are out to (often) kill indiscriminately, players will find this test of value quite challenging.

Like any good roguelite, Evertried’s got plenty of opportunities for you to die repeatedly, but some things will carry over between runs. Not your progress, naturally, but shop items, such as skills and modifiers, that you can exchange for shards you’ll collect after defeating enemies. These upgrades are an absolute godsend, from healing skills to attacking immediately after dashing and even being able to set up traps to hurt enemies. Some passive upgrades, like healing, doesn’t seem to always work and it’s a little unclear under what conditions I can use it, but it’s a small complaint considering the decently balanced offensive upgrades you can receive. 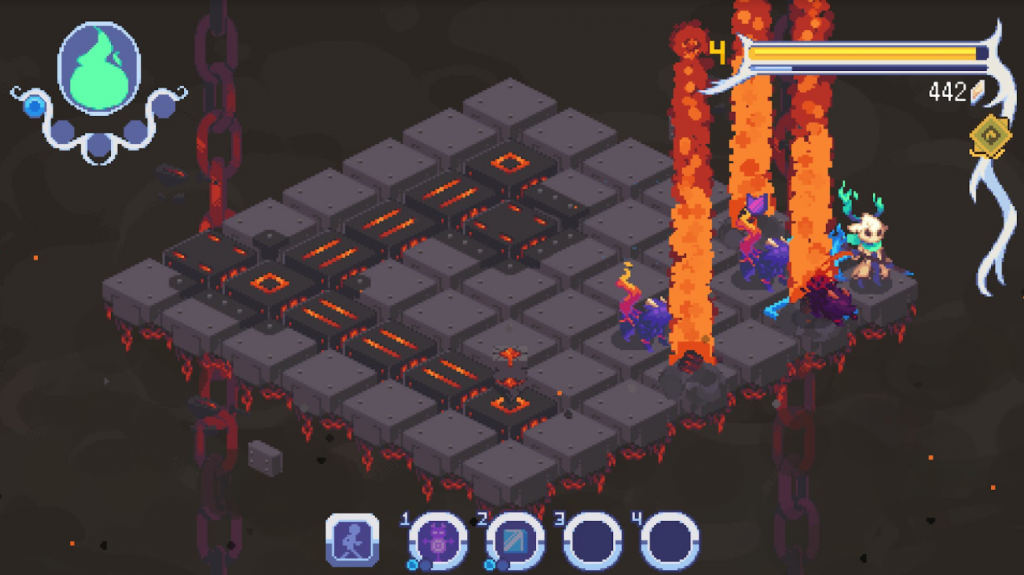 Although Evertried scales well in terms of difficulty and keeps things simple yet interesting, I often felt like the focus meter mechanic was weighing down an otherwise fantastic turn-based tactical roguelite. There are so many little things you have to keep track of, like unique enemy movement/attack patterns and environmental factors, that it’s easy to want to spent more time carefully considering your next move on your own time instead of hastily choosing something — anything — before the clock runs out. Luckily, the developers have heard the pleas of players and are releasing an update on console soon with a setting to toggle the focus meter on/off. For a really in-depth assessment of how frustrating and imbalanced the mechanic can feel, I highly recommend this video for more information.

Evertried attempts to do so much in such a beautifully contained package (a little bit like Into the Breach with a Hollow Knight coat of paint), but it ultimately feels hard to initially grasp and a little repetitive, even in big moments like boss levels. Of course, I’d be remiss if I didn’t mention that that description is commonly par for the course in the genre, so that’s not necessarily a knock either. The turn-based tactics are awesome and the focus meter is a cool idea, but some tweaks are needed to make the two components come together seamlessly. Once that gets squared away, I can certainly see Evertried ascend to the top of must-play roguelites.

Evertried does a lot right — fans of roguelites who have played them all and want to explore something novel might enjoy this unique spin on turn-based tactical gameplay. It definitely instills that “one more turn” kind of feeling from the get-go, eagerly inviting players to die, die again. If Into The Breach was your cup of tea and you’re looking for something with that kind of flavor, Evertried is here to take you to new heights.

Editor’s note: This review is based on a retail copy of Evertried provided by the publisher.