Bassmaster Fishing 2022: A Big Bass But Not Catch of the Day 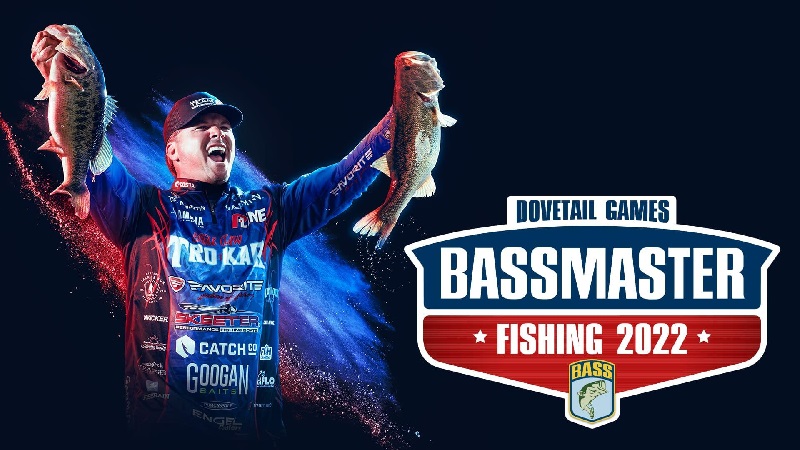 Ah, fishing. The word conjures up fond ideas of lazily drinking beer by the lake, watching the world go by. But this isn’t the case for the competitive anglers of Bassmaster Fishing. These skilled fish fanatics compete every year in tournaments, bagging the biggest bass and capturing the most colossal carp, battling to land the most and the heaviest fish to win glory and substantial cash prizes. Every hour, every minute and every second counts in these gladiatorial contests of fish-catchery. For hardcore enthusiasts of fishing, the Bassmaster fishing tournaments are the place to be – but can the 2022 installment of the videogame series hook in a wider school of gamers as well?

I was lucky to attend a Q&A session with two developers of Bassmaster Fishing 2022 before the game’s release, and it was clear from talking to them that a great deal of work had gone into recreating an authentic fishing experience. Miles of lake from real-world settings have been painstakingly simulated and brought to life. There’s no prefabricated, cut-and-pasted scenery here; every lakeside house and every reed in the shallows looks well-realized. The developers’ efforts are also apparent in the AI of the fish, which  react and move realistically, moving in schools and flocking to certain areas at different times of day.

When I first set out in my powerboat to find some fish, I was immediately a little daunted at all the options on offer. You can cast your line in either a simplified mode, where you simply stop a moving bar to determine how far out the line goes, or a trickier professional style, where you control the exact arc of the cast and the motion of the follow-through. 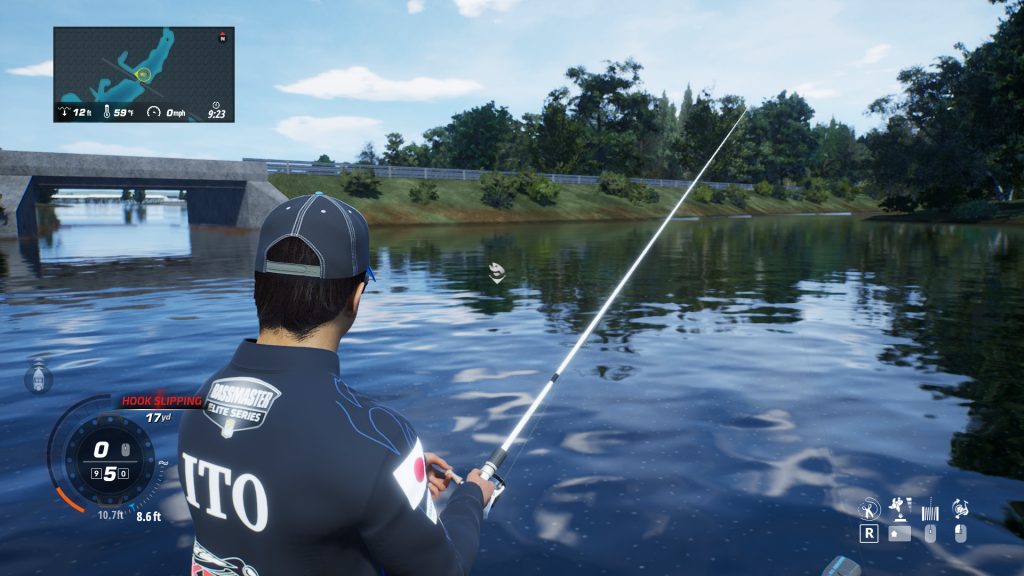 There’s a lot of little details that you’ll find, which all enhance the realism. If you’re fishing in shallower waters with a muddy lakebed, your rod may drag along the bottom and get snagged, forcing you to jiggle the hook free of its trap. Likewise, there’s a more in-depth exploration of snagging the fish themselves. You can increase your odds of success by getting a good “strike”, where you drag the hook into the mouth of the fish as it takes a nibble to get some good traction.

If you want a more granular fishing experience of fishing from start to finish with all the little intricacies involved, Bassmaster Fishing 2022 has plenty on offer.

The career mode has you starting out in the college circuit before moving up through the minor and major leagues to the dizzying heights of the Bassmaster tournaments themselves. You’re able to customize your character’s appearance, and spend some of your winnings to purchase more cosmetic gear. Think a lot of cargo shorts, bucket hats and logo-emblazoned jumpsuits.

The tournaments are surprisingly nail-biting since it’s entirely possible to turn things around right up till the last minute. In one of the college tournaments I was competing in, the goal was to catch five bass with a combined weight higher than that of my 49 fellow fishermen. I spent most of the tournament catching tiddlers and slowly sank to the bottom of the leaderboard. In the last few minutes, though, I cast my hook, thoroughly expecting to come dead last – and got a nibble. After a particularly tough session of reeling, I had caught an absolutely gargantuan bass. Immediately I shot all the way to first place and finished the tournament as a champion. 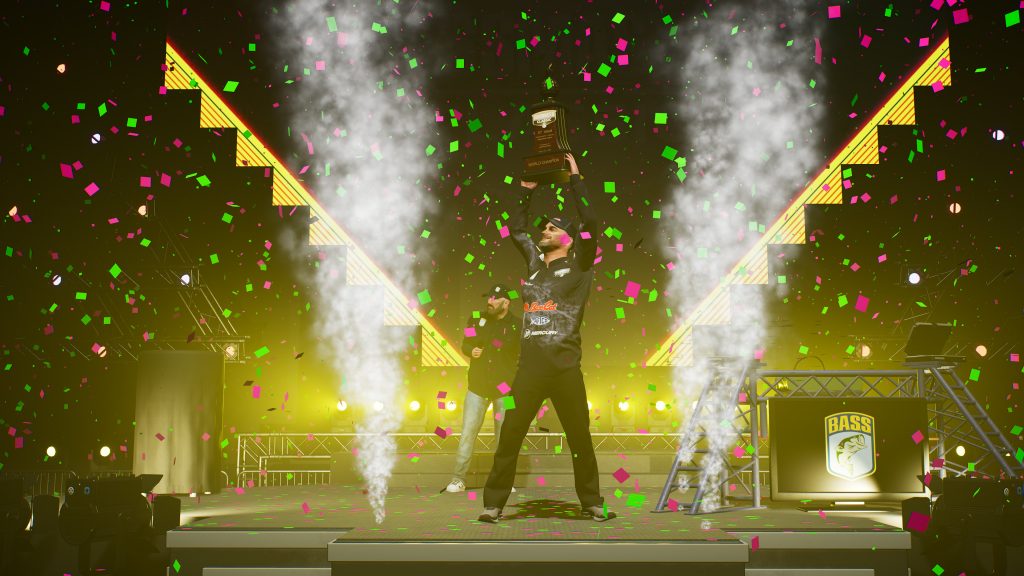 Some gamers might not be entirely pleased that so much depends on luck. I honestly can’t say I spent loads of time using the practice mode to explore the lake, or testing out the many different rods and bait on offer. I just got lucky that the right bass swam my way. Much like real fishing, a lot depends on perseverance and whether the bigger fish deign to bite your hook. Whether that will appeal depends on if you can enjoy waiting long periods of time for the fickle fish to swim your way.

What’s a little unfortunate is how bagging a big fish often lacks the drama and pageantry that you might expect from the flashy fishing minigames of recent Triple-A titles.

Catching a fish can often come as a surprise, as you’ll be in the middle of reeling it in only for the screen to fade to black, before fading back in to show your victorious angler holding his freshly caught fish aloft. This can feel rather random and anti-climactic, giving me a reaction of “oh, I caught it?” when I should have been feeling like “yes, I caught it!”.  Some sort of animation to show your angler pulling the fish from the water or reaching down to snatch it would have added so much to making it feel like your pitched battle with a particularly stubborn fish had come to a satisfying conclusion. 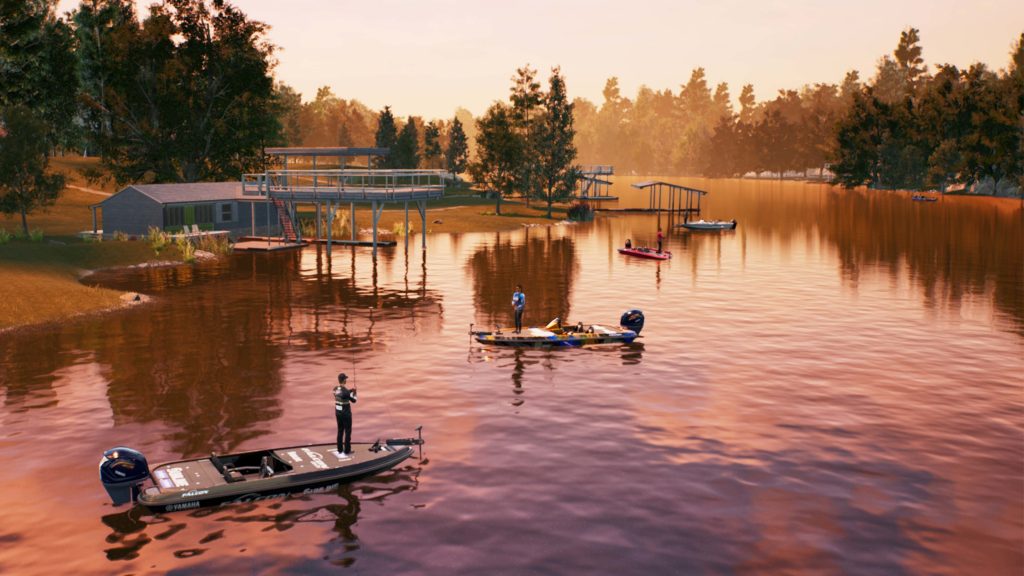 I can’t deny that I was a little disappointed at the career mode. The likenesses of several Bassmaster fishing champions like Scott Martin and Hank Cherry were all scanned for the game, so it seems a missed opportunity that more wasn’t done with the participation of these high profile fishing luminaries. It would have been really cool to see Hank Cherry approach my character to offer me kudos on my victories on the college circuit as an up-and-comer, become my mentor and later, inevitably, my rival as I emerged into the big leagues, in a classic showdown of master versus student. Instead, there’s no real story at all.

Perhaps instead of simply accruing sponsorship stickers on my shirt, there could have been more for my character to spend my hard-earned gains on, such as a lakeside mansion in Tahoe or a fancy yacht. As it stands, the career mode does give a bit more structure than mere freeform fishing, but it doesn’t do that much to really immerse you in this world beyond that.

There’s also a multiplayer mode on offer where you can compete with anglers online, which will surely extend the lifespan for fans.

Bassmaster Fishing 2022 provides a really in-depth and realistic simulation of fishing at the tournament level, but it is missing a lot of the flair that might have made it more accessible to gamers at large. It’s not a catch that will go down in legend, but for fishing fanatics it’s a hearty haul nonetheless.