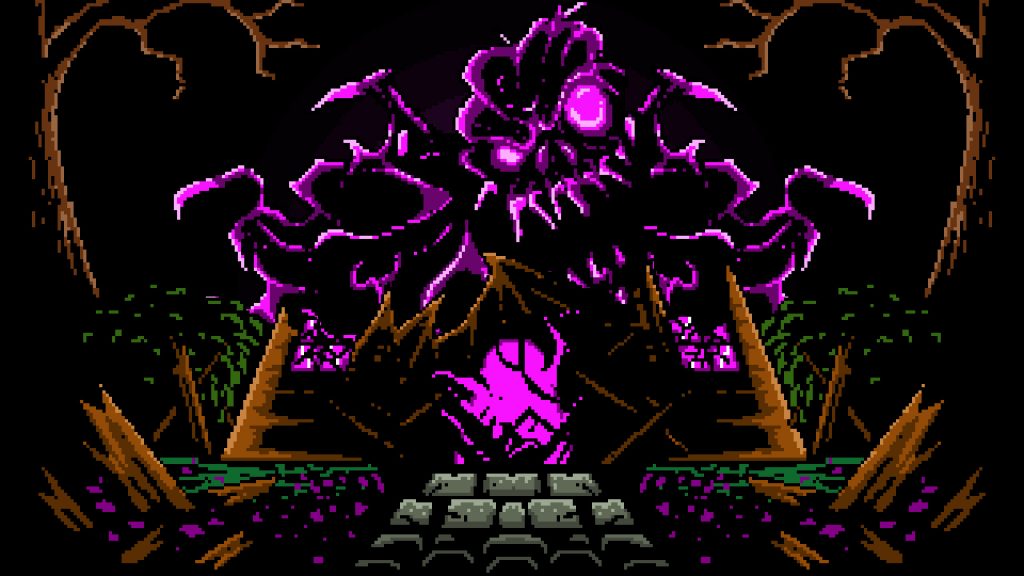 The wonderful thing about crowdfunding is it helps bring us projects that might otherwise get neglected. One such example is Sunshine Manor. It’s an 8-bit horror game developed by Fossil Games and published by Hound Picked Games. It follows the mournful tale of Mr. Aitken. He used to host a children’s TV show called The Sunshine Hour. He gave it his all, but then struggling ratings threatened to take everything away. Desperate for a glimmer of hope, Aitken discovers a fortune teller, and his luck turns around. He agrees he’ll do anything to be a success, and the fortune teller agrees to make it happen.

Years later, The Sunshine Hour is a massive success, but Mr. Aitken is unfulfilled. Sure, he’s a financial success, but he’s tired and ready to retire. Until the fortune teller uses dark magic to puppeteer him into atrocious acts of violence. A few years afterward, three young girls are trick or treating at the derelict Sunshine Manor, and foolishly enter. Within moments, two are immediately snatched by robe-wearing horrors. Ada fears she’s going to join her friends in captivity, but somehow casts magic to scare her would-be captor off. Once safe, a little ghost boy appears and asks for Ada’s help. And thus begins our adventure. The question this Sunshine Manor review aims to answer is how well does the game satisfy as a retro horror title?

A Tale of Two Aitkens 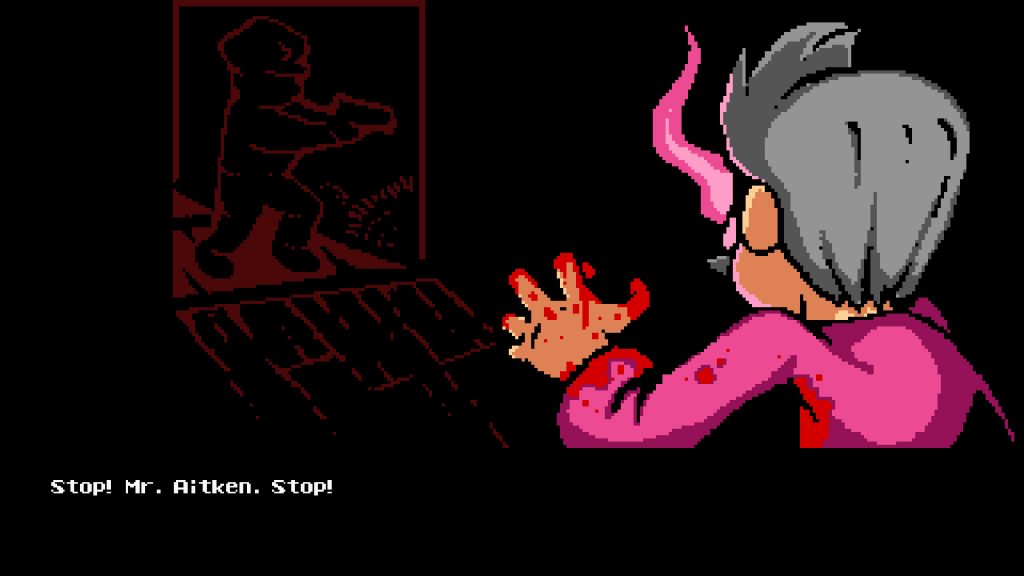 I should mention, Sunshine Manor is actually the prequel to a game called Camp Sunshine, but I have no experience with it. Luckily, being a prequel and all, that’s not really required. The only thing the two appear to have in common is their focus on survival horror with an 8-bit aesthetic. From the get-go, Sunshine Manor really embraces the survival horror. The game makes great use of ambient noise and music to create tension. I didn’t even notice at first, but the game gets really quiet when you’re about to get attacked. It’s no joke my first encounter with the robed stalker nearly made my heart leap out of my chest. Luckily, Ada’s not a damsel in distress, and can actually use magical powers to protect herself.

Magical Girls Get It Done 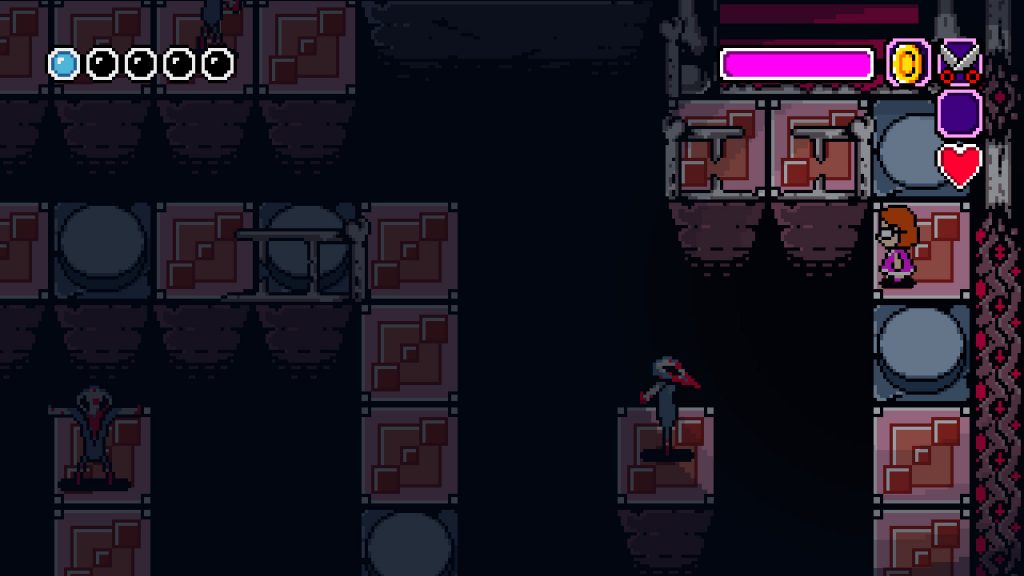 The boxes in the upper right display Ada’s available tools, such as a coin and scissors.

Though Ada never learns any new techniques, she has two key abilities at her disposal. One is to cast a circle of magical power. This will stun more powerful foes and destroy weaker ones. The other ability gives Ada a burst of speed, helpful when she’s being chased or needs to race across crumbling platforms. The only catch is both abilities depend on one magic meter, and I was never able to increase my magical capacity. As such, one use of either ability will render Ada unable to use another again for several moments. But once it refills, you’re good to go. This makes the game a good balancing act as you decide when it’s best to use your magical gifts.

Besides using magic, Ada also comes across various tools. These are all pretty much single-use, disappearing once they’ve served their purpose. Most are required to solve puzzles and progress farther in the adventure. You’ll get a broom to sweep up clutter, tape to staunch the flow of water from pipes, and much more. I found these were all pretty intuitive, at least once I realized the different items would automatically work when presented with the right stimuli. It also helps that there’s not any unique button controls for different items, so it’s just a matter of finding where to use each one. 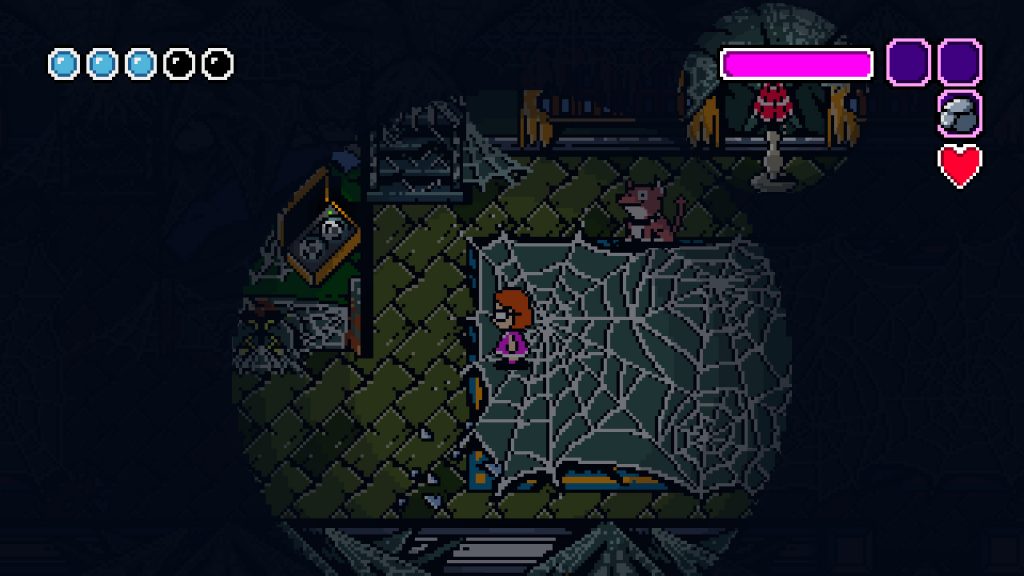 The action of the game is effectively split between two different sections. There’s what I call the survival horror exploration in the manor itself, and the demon realm dungeons. You’ll basically need to explore the manor, find a ghost in distress, help it realize it’s actually dead, and then enter the dungeon to save them from demonic torture. Most of the horror takes place in the exploration portions, since the robed stalker appears unexpectedly. Though the earlier dungeons also have more than a hint of horror, with headless gluttons chopping you with meat cleavers and horrifying apparitions chasing after you. As the game progresses, the exploration sections will get more complex. Not only will what’s chasing you change, but purple searchlights will burst from the floor in different rooms. Getting hit by these will drain Ada of all her magical charge. Which sounds really problematic, but I never really ran into any situations where I was depleted before I encountered something I needed to zap. 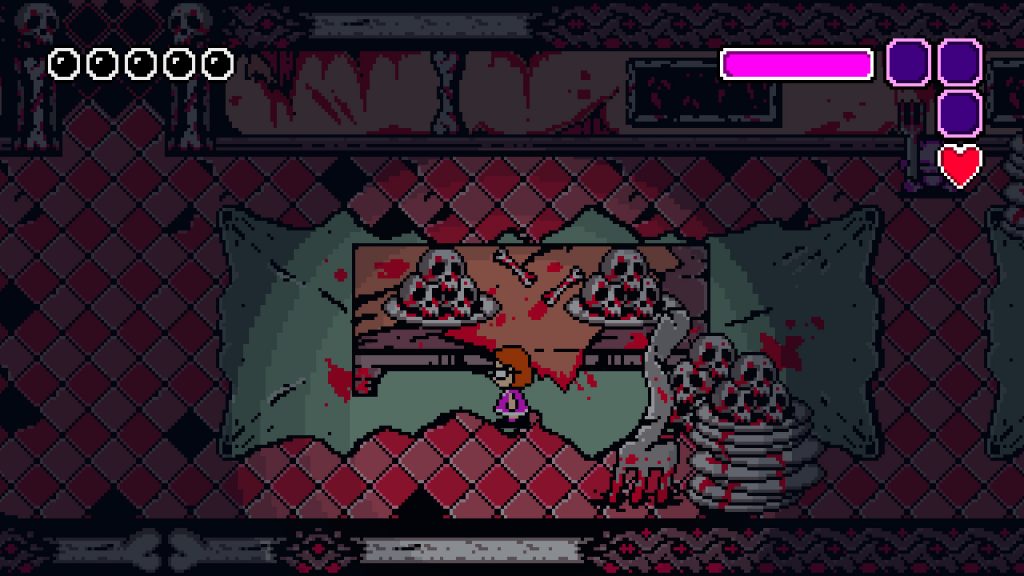 I liked how the game alternated between these sections, especially since it means that boss fights only occur in the dungeons. The only downside to that revelation was it really diminished the horror in the exploration segments. I knew that so long as I had a full charge when I entered a room, I’d be perfectly fine. Which though a relief, was also slightly disappointing. My suspicion after looking into Camp Sunshine is that this was a deliberate choice by the developers to make the game less challenging, since in that game you could be hounded anywhere and at any time. Whereas here that only occurs in one half of the game. 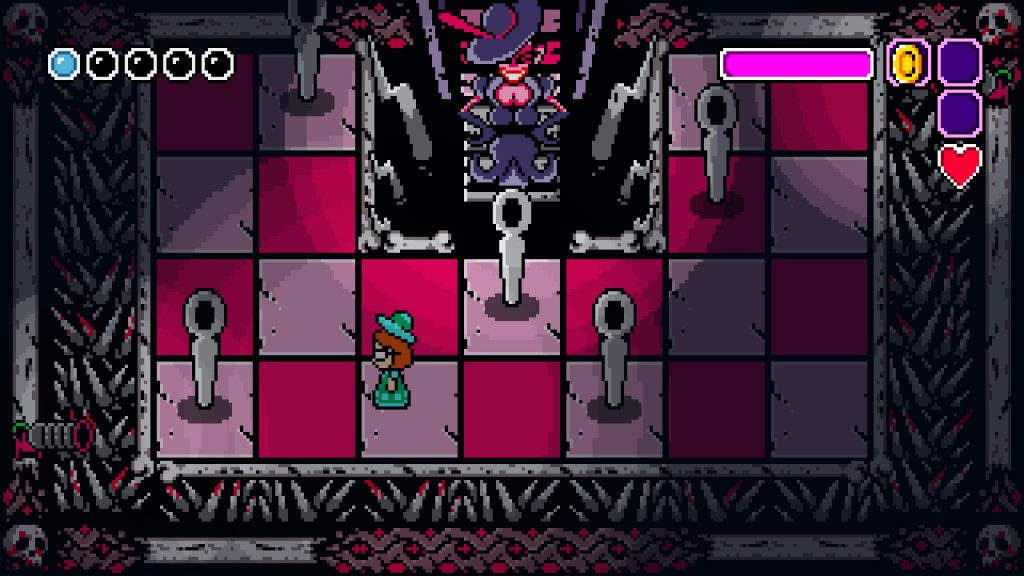 Speaking of the boss fights, there’s only a handful, but they’re all really distinct and fun challenges. One has you fighting a demonic diva by bouncing her razor-sharp hat back at her; another has you fighting a gigantic slime monster in a submarine. You never know what you’ll face, and I appreciated the game keeping me on my toes. My only small complaint is that there’s not a boss fight in every single dungeon, since there’s only a handful.

Which brings me to something that, while not a huge deal, was a bit of a bummer. Sunshine Manor is incredibly short. Admittedly I didn’t 100% all the secrets, but I managed to roll credits in a bit more than 3 hours. That’s a really short experience, no matter how you cut it. Luckily I’m not one of those reviewers that thinks a game has to be really long to be worthwhile. That said, I’d be lying if I said I wouldn’t have appreciated more excuses to spend time with the game. Because it’s pretty charming, and I would have loved just a bit more to do. 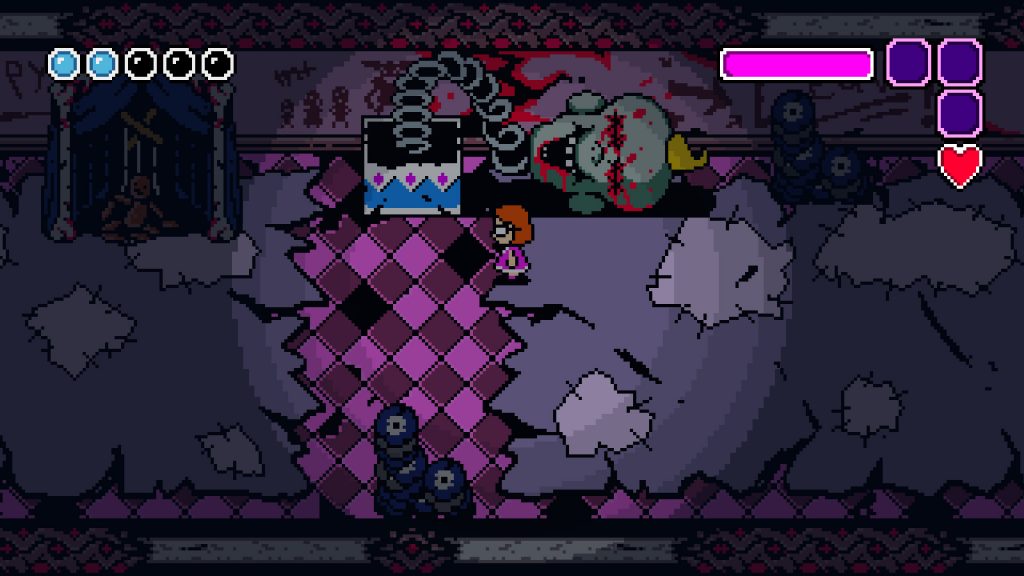 You’d be surprised to hear that, despite the 8-bit focus, Sunshine Manor does a masterful job of showcasing horror. Sure it’s cute a lot of the time, but behind that cheerful exterior hides some haunting imagery. You’ll wander across piles of bones and blood, avoid demons wielding pitchforks, squelch through nasty sewers, and much more. Whenever you face off against a head demon, things also get really delightfully grotesque. Early on, you pop one like a zit, only for his muscled upper torso to angrily crawl after you. And another unlucky demon gets cut in half. It’s bloody and gory, and it is a lot of fun. 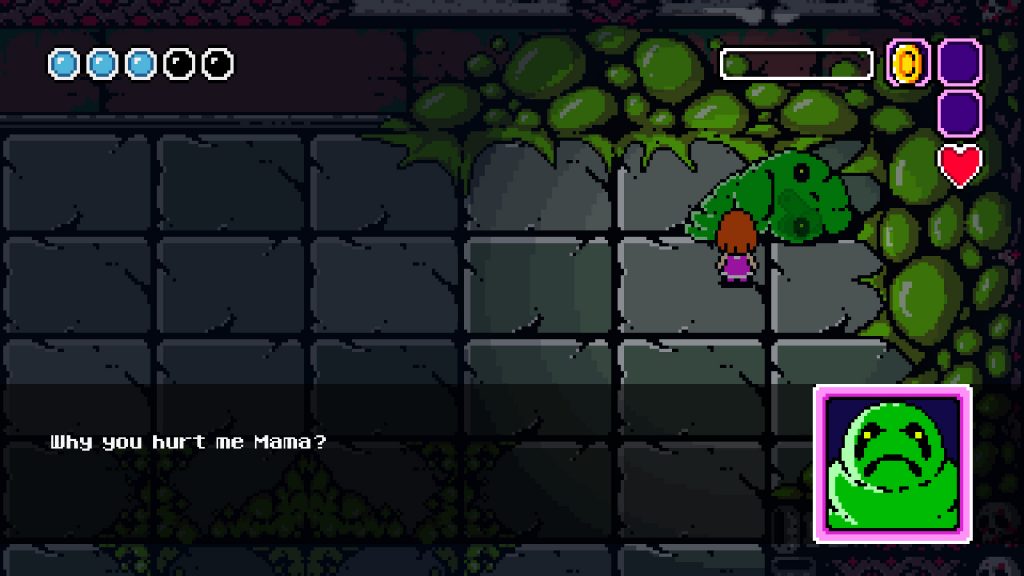 The game also makes good use of light and darkness to keep things tense. You’ll have a small globe of light around Ada, and that’s it, other than a few assorted lamps you can flip on. But even then, you’ll rarely be able to see the entirety of a room until you move around. I really appreciated the visual design of the game, but I’d be remiss if I didn’t touch on the sound design. Earlier I talked about the great use of ambient noise. Besides that, all the sound effects are great, as are the musical choices. I especially like how Ada’s canine friend barks to warn you that foes are nearby. And the voice acting for the cassette tapes you can find is fantastic as well. The music also complements the action wonderfully, and never gets in the way of the action. Put together, Sunshine Manor is an attractive game with great tunes. 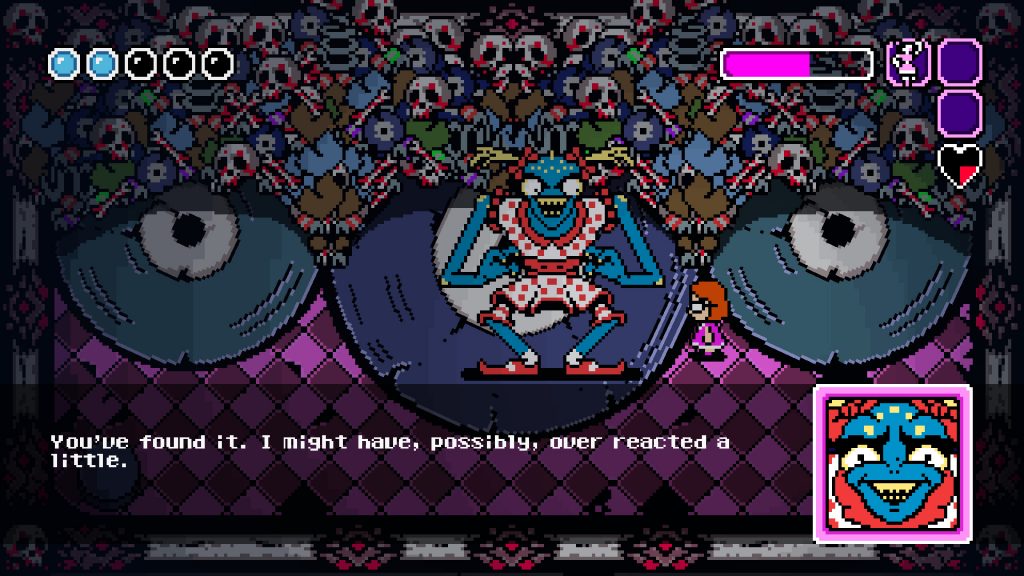 Originally I was planning on a section going in-depth about various glitches or bugs I discovered. And while I did come across a few, such as Steam achievements not loading and the screenshot overlay not working, I have it on good authority the team is actively working on patches. In fact, in the week or so that I’ve been playing the game, they’ve already made several improvements to streamline the experience. So while I was perplexed by some of these, I’m confident they’re being addressed. 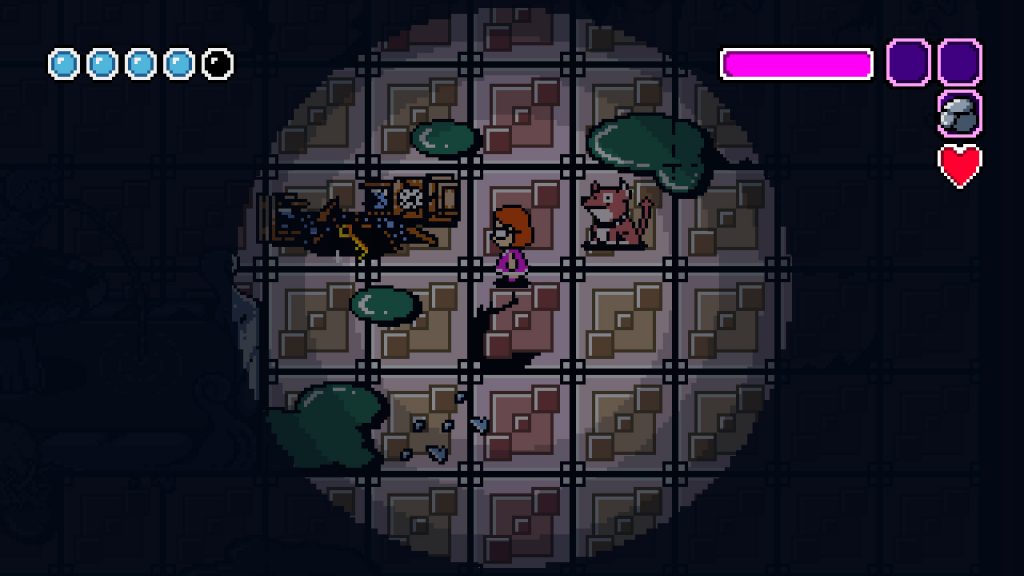 Now, that said, there were a couple minor issues that did irk me. One is that going to the pause screen doesn’t actually pause anything on the screen. I found this out the hard way when I paused and got attacked by a monster. And in the first dungeon, you never know where the gluttonous choppers will appear, which meant I often took a cheap hit the moment I entered a room. Which wouldn’t be an issue, except there are some achievements for beating dungeons without taking damage. Otherwise, I have very few complaints about the game.

Lots of Survival, Not as Much Horror

While I had a lot of fun reviewing Sunshine Manor, I don’t feel it quite lived up to the promise of 8-bit survival horror. There are moments of it, certainly, but they’re few and far between. That said, the gameplay is well balanced, and you’ll do a lot of puzzle platforming in the diverse dungeons. If nothing else, the game kept innovating and showing creativity, which I respect. And though I do have some unanswered questions about the plot, it seems clear the game is going to get a sequel at some future point. If you’re a fan of retro and want something different, I’d definitely check Sunshine Manor out.