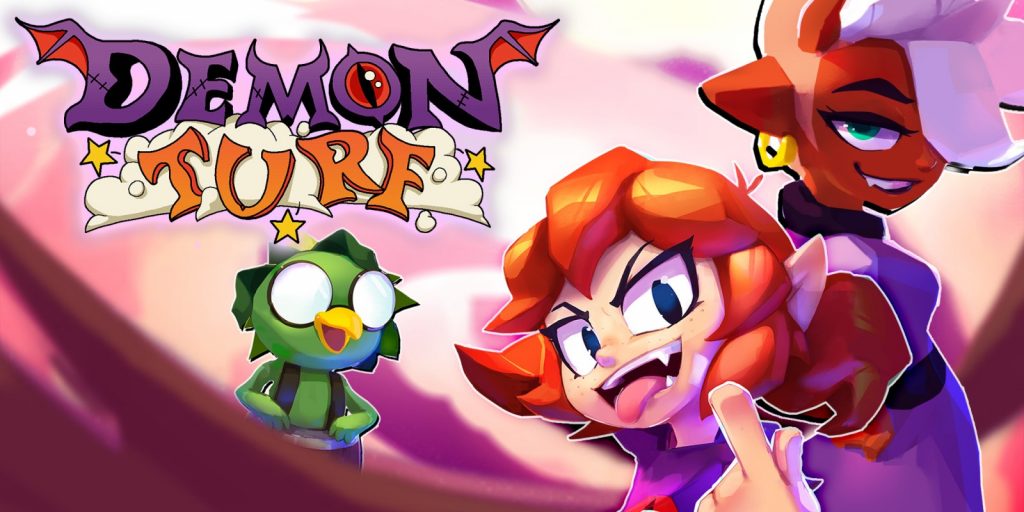 Developed by Fabraz and published by Playtonic Friends, Demon Turf makes a strong first impression with its distinctive visuals and challenging platforming that subtly tweaks the genre’s familiar mechanics in unexpected ways. However, a killer look and a few good ideas can only take a game so far. At the end of the day, what’s most important is how well it plays. And while Demon Turf undoubtedly has some good things going for it, unfortunately, a persistent lack of polish permeates the entire experience and prevents the game from reaching its full potential. 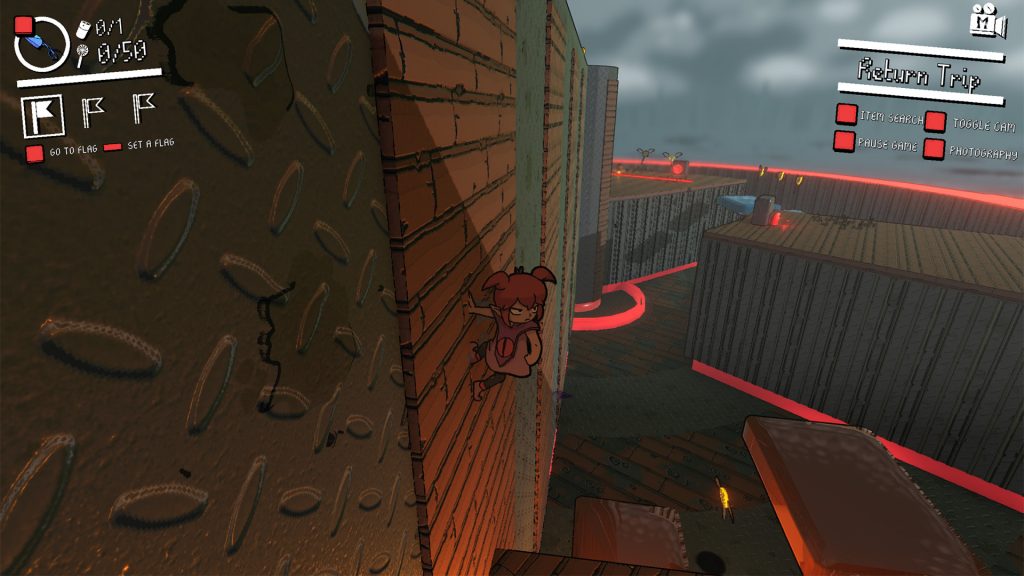 Demon Turf puts players in control of Beebz, a feisty little hellspawn on a mission to overthrow the Demon King and claim his throne as her own. However, before Beebz can become the Demon Queen, she’ll first need to tackle the various gangs of the underworld and steal their turf. Beebz’s campaign of demonic domination takes her to a wide variety of unique landscapes full of punishing platforming action as she battles colossal bosses, gathers goodies, and expands her repertoire of special abilities.

No, Demon Turf‘s plot isn’t its greatest strength. Still, it serves as a good enough excuse to embark on your netherworld turf war. Right from the outset, Beebz can perform a jump, double jump, and spinning glide. By stringing these abilities together, you can even unleash a super jump that sends her catapulting through the air a great distance – perfect for reaching far away platforms. The various stages that make up each world feature tons of verticality and numerous deadly spike traps and pitfalls. With this in mind, you’ll need to make clever use of all of the various abilities it puts at your fingertips to navigate the perilous environments successfully.

These are just the tip of the iceberg. Before each boss encounter, you’ll unlock new abilities that allow you to do things like turn into a wheel, slow time to a crawl, wield a grappling hook, and more. Unfortunately, with so many capabilities at your disposal, coming to grips with Demon Turf‘s controls can be a little overwhelming. Stringing together three different types of jumps in addition to utilizing your other special abilities—all while avoiding deadly stage hazards that can obliterate Beebz in a single hit—can feel like a borderline carpal tunnel-inducing affair. Even by the end of my review playthrough, I still struggled to wrap my hands (and head) around the game’s increasingly convoluted control scheme.

You Can Catch These Hands 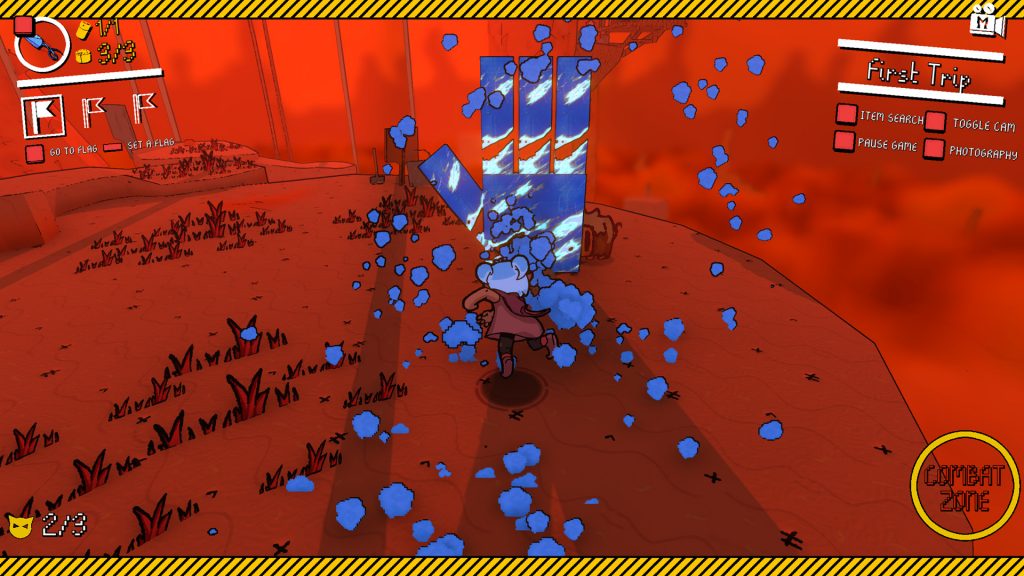 You’d think hands this size would pack a punch.

While you’ll spend most of your time gliding, leaping, or pinballing your way through the environment, you’ll occasionally need to duke it out with enemies too. More often than not, these fights unfold in small, pre-defined arenas filled with random spike traps to bump your opponents into for a one-hit kill. Pressing the R2 button unleashes a light attack with a tiny, disembodied fist while charging the button for a few seconds then releasing it unloads a sedan-sized palm to pummel your enemies. Additionally, rapidly pressing the attack button unloads a flurry of blows that deals light damage but is an excellent way to nudge evil pigs, cannon-toting pirates, and other baddies towards ledges and other lethal traps.

In addition to using your mystical mitts to flatten your foes, there are other ways you can put the squeeze on them. For example, you can perform a spinning slash with a press of the L2 button for up-close attacks, jump on your enemies’ heads, or even use your grappling hook to steal their weapons or shields and snatch flying enemies from the air.

On paper, this all sounds like it’d come together to create some pretty exciting encounters. But, unfortunately, that’s not quite the case with Demon Turf. Even after spending enough cakes (the game’s form of currency) on all sorts of upgrades, the combat never felt satisfying and lacked any kind of impact. Even the enemies seemed disinterested. They’d simply wander around each arena aimlessly like wind-up toys, firing their weapons blindly or stumbling into hazards that’d kill them instantly. 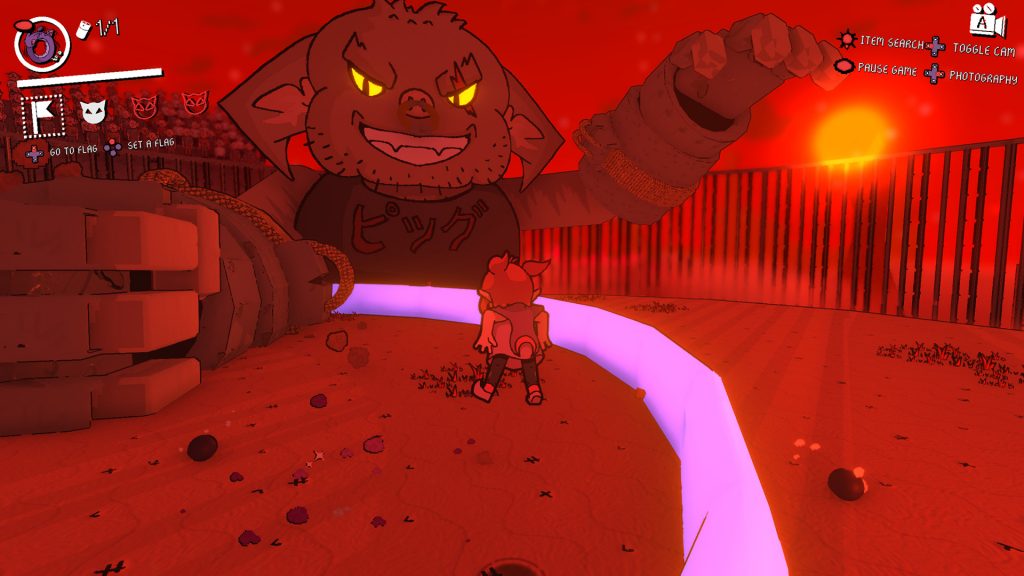 Demon Turf’s bosses can be colossal, but they often exercise in frustration.

Boss fights don’t fare much better, either. The game doesn’t do a great job of making it clear what it wants you to do during these encounters. Sometimes this is due to the occasionally frustrating camera, which can find itself stuck beneath a platform you’re standing on, thus obscuring your view of a critical item you need to interact with. Other times, it’s simply hard to tell if you’re even hurting a boss at all. Add to this the fact that a single hit will cause you to restart from the last checkpoint, and you have a recipe for frustration. Needless to say, this is a shame. Rather than feeling like a reward for overcoming each world’s challenges, these fights instead feel like grueling gauntlets that just drag on forever. 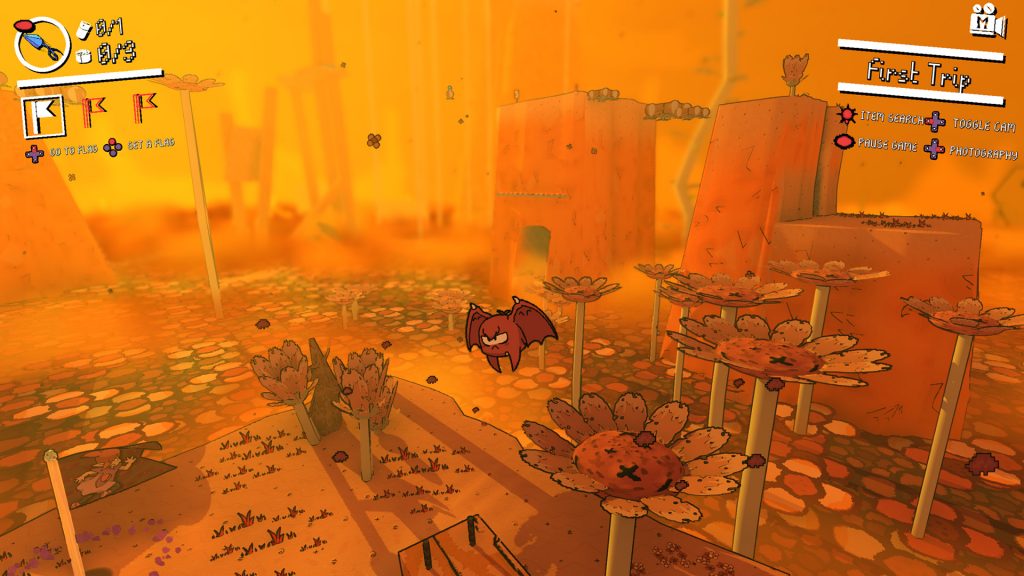 Some of the forms Beebz assumes when executing her abilities, such as this demon bat that appears when she double jumps, are downright adorable.

One of Demon Turf’s most unique features is its approach to checkpoints. Apart from during the boss fights, you’re required to set them manually by planting a flag in the ground wherever you choose. However, you only get a handful of them to use per level, which means you’ll want to consider where to deploy them carefully. Burn through your flags all willy nilly, and you could find yourself in a tough spot down the road.

At first, I found this idea very novel but gradually started to like it less and less over time, mainly because the size of stages can vary massively from one area to the next. You can plow through some areas in just a few minutes. Others, however, can take a half-hour or more to complete on your first run – especially if you’re trying to collect all of the hidden items scattered throughout them. The problem is you’ll never know just how long they are until you’ve finished them once before. As a result, I often found myself avoiding using them as much as possible because there’s nothing more disheartening than using your last flag, only to discover half a dozen or more obstacles standing between you and the stage’s exit. Still, I’m sure some players will find Demon Turf’s approach to checkpoints an exciting change of pace that adds a welcome layer of strategy to the proceedings. 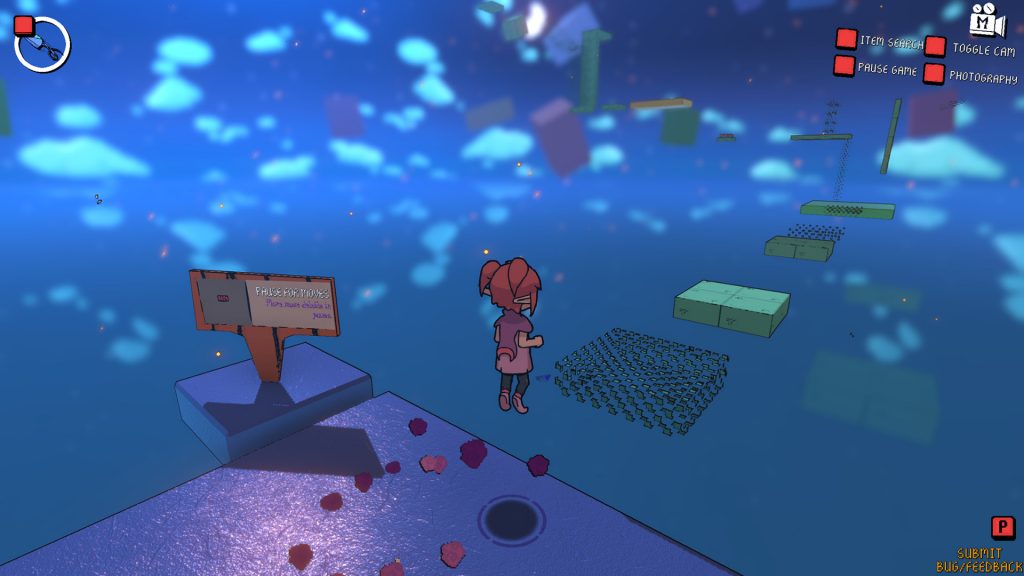 When it comes to its presentation, Demon Turf would have looked right at home on the Dreamcast with its mix of attractive hand-drawn sprites and basic but clean map geometry. This unique mix of 2D and 3D assets gives the game a really distinct look that I enjoyed immensely. I especially liked the various forms Beebz would transform into when using her unique abilities. Watching her change suddenly into a bat when performing a double jump or a weird demon squid when swimming underwater always put a smile on my face and helped give the game a bit of extra charm.

However, there’s a lack of consistency from sprite to sprite. While Beebz and the rest of the residents of Forktown are appealing, many of the other characters you’ll encounter feature fairly forgettable designs in comparison. This issue is especially evident in many of the enemies you’ll face, who feature so few frames of animation it’s as if they’re gliding on the ground on rollerskates.

As for the music and voice acting, they’re nothing to write home about, but they get the job done. My only real complaint is that some of the tunes can become pretty repetitive after a while, a problem that becomes more noticeable during Demon Turf‘s lengthier boss battles.

Demon Turf Has Some Interesting Ideas, But It’s Not Quite Worthy Of The 3D Platformer Throne.

While rough around the edges, Demon Turf provides plenty to keep fans of 3D platformers busy. After you beat an area’s boss, you’re able to visit more challenging versions of each stage. Additionally, there are tons of hidden cakes and cartridges to collect and photo challenges to complete in every area. That said, completionists will likely have a field day with what Demon Turf has to offer.

Demon Turf is a stylish and challenging platformer that brings some interesting ideas to the table. And while they may not all live up to their full potential, I can appreciate developer Fabraz taking a chance at shaking things up. If you’re a die-hard fan of the genre and are looking for something new to scratch that itch, Demon Turf probably won’t dethrone your favorite platformer. But that doesn’t mean there isn’t any fun to be had here. However, if you don’t fall into that category, you’ll probably want to consider hoisting your flag elsewhere. 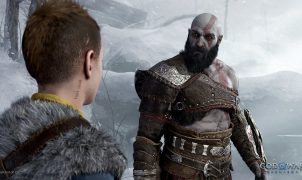 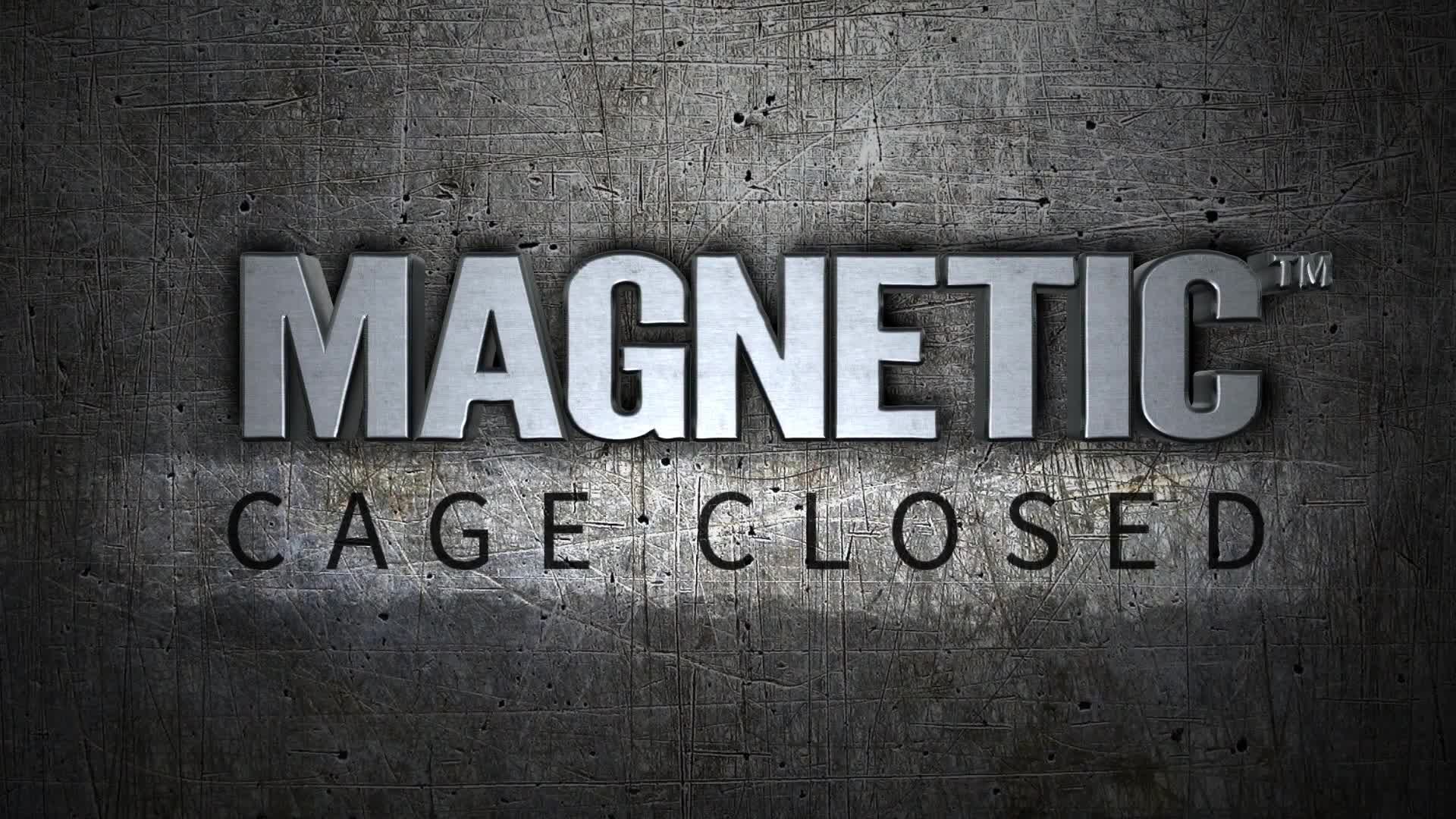