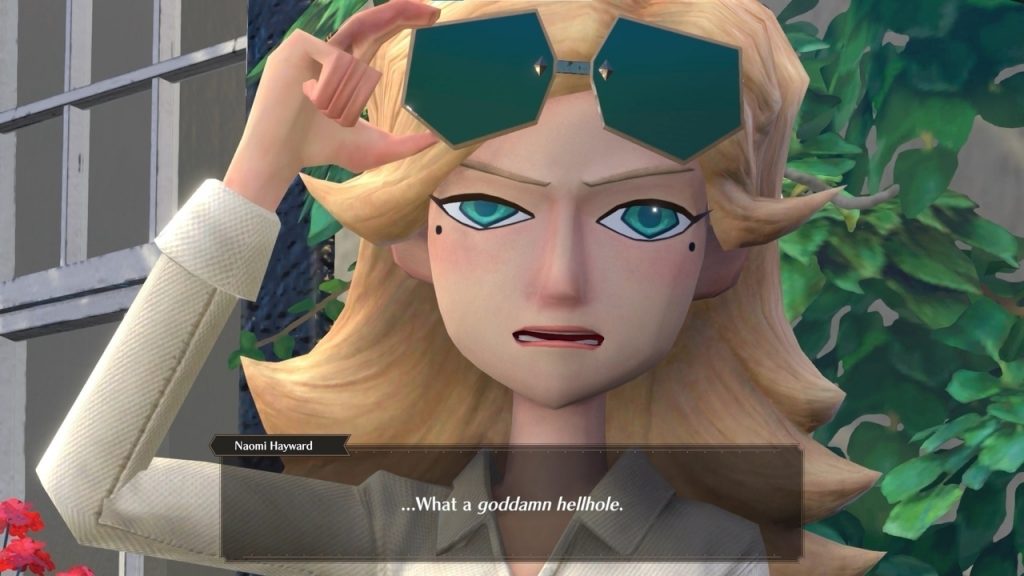 Photojournalist Naomi Hayward is in quite a pretty pickle. You see, she’s £30,000,000 in the hole — the kind of debt that’ll really eat at you — and she only has £500 to her name. Instead of living out the rest of her life in debt bondage, her company, Morning Bell, has offered an extremely odd yet fortuitous deal: uncover the mystery of the tiny English town Rainy Woods and they’ll wipe her debt clean. Sounds too good to be true, right? Not only that, while she’s there, she’ll have free room and board AND the opportunity to earn extra cash on the side. Something’s definitely up, right? Like this isn’t normal at all and must be an incredibly weird situation, you know? 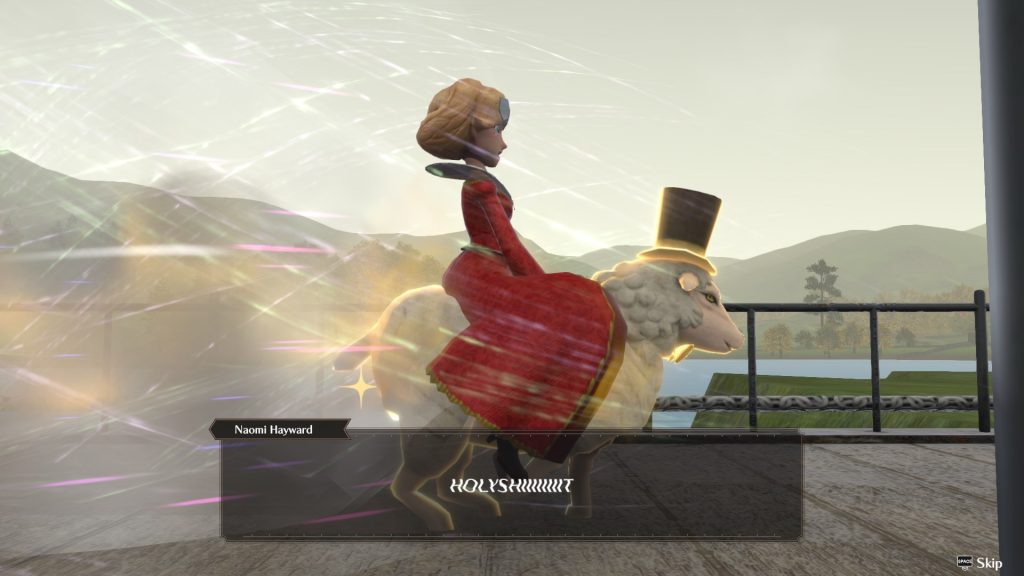 But you know, that’s SWERY for you. Fans of his other works, like Deadly Premonition, will somewhat understand his vision in The Good Life, although this “debt-repayment simulator” is a whole lot wackier (and surprisingly more polished) than his previously released titles. Available for $39.99 on PC, PS4, XBox One, and Switch, The Good Life asks players to “enjoy everyday life while solving a murder mystery in Rainy Woods – known as the ‘happiest town in the world.'” If the murder bit gave you pause and felt a little out of left field, well… let’s just say fans that already know what SWERY is capable of recognize that’s really only scratching the surface. As for everyone else, you’re in for a wild ride (on a sheep with a top hat even)!

As a gamedev by day and reviewer in my spare time (hah), I want to stress that I’ve played an obscene amount of games. I spend a good 6 – 8 hours every day playing games for either work or review, followed by whatever games I decide to play afterwards. I say this only to emphasize that The Good Life is quite possibly one of the weirdest games I’ve ever had the pleasure of reviewing. The good kind of weird, but weird nonetheless. 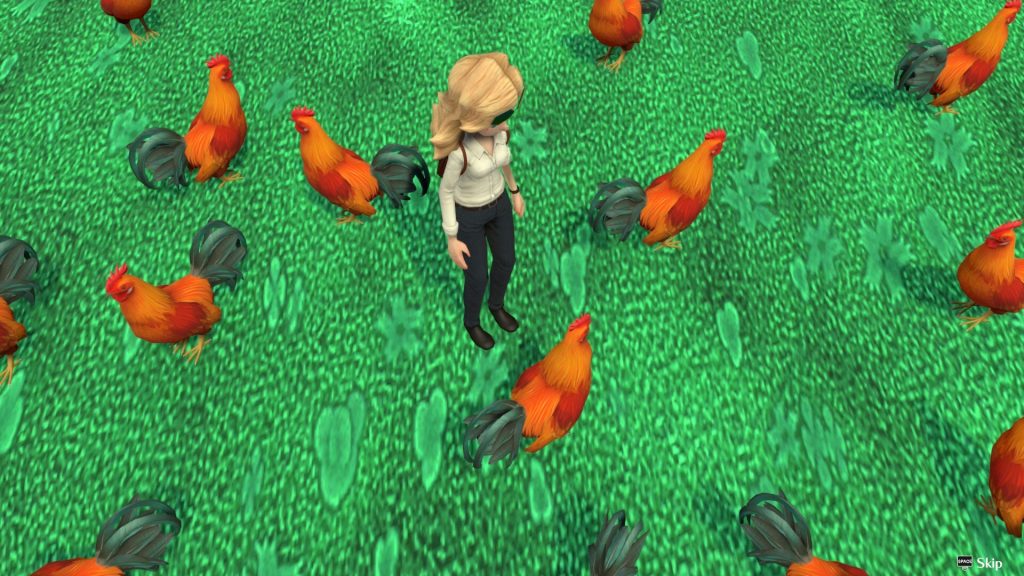 The Good Life is the sum of many moving pieces that simultaneously feel at odds with each other yet are cohesive enough to work well together (I know that doesn’t make a lot of sense, but bear with me here).

I’ll start with the characters. Naomi herself is a capricious New Yorker who has suddenly found herself living in the middle of the bucolic English countryside. Prickly and downright rude at first, she’s able to turn on the charm as needed, greasing the wheels of the townsfolk when she realizes she needs a favor or two from them. She’ll do most anything they ask — after all, she has a debt to repay — with a smile for show on her face and a grumble under her breath. She’d feel right at home on the set of Seinfeld — this selfish drinQUEEN seems to have pissed off some higher being, because boy does the universe have it out for her and her ungrateful, sassy ways.

As for the rest of the characters, they’re equally defined in their personalities to the point where it actively plays into the game; you see, every night, the townsfolk turn into cats or dogs, depending on their alignment. It’s not an inherited family trait, either — after a few fetch quests, Naomi herself will soon gain the ability to turn into both a cat or dog as needed. While a cat, she can scale tall buildings and hunt small critters; as a dog, she can run much faster than her other forms and use her heightened sense of smell to track people down. What even is this place, exactly? 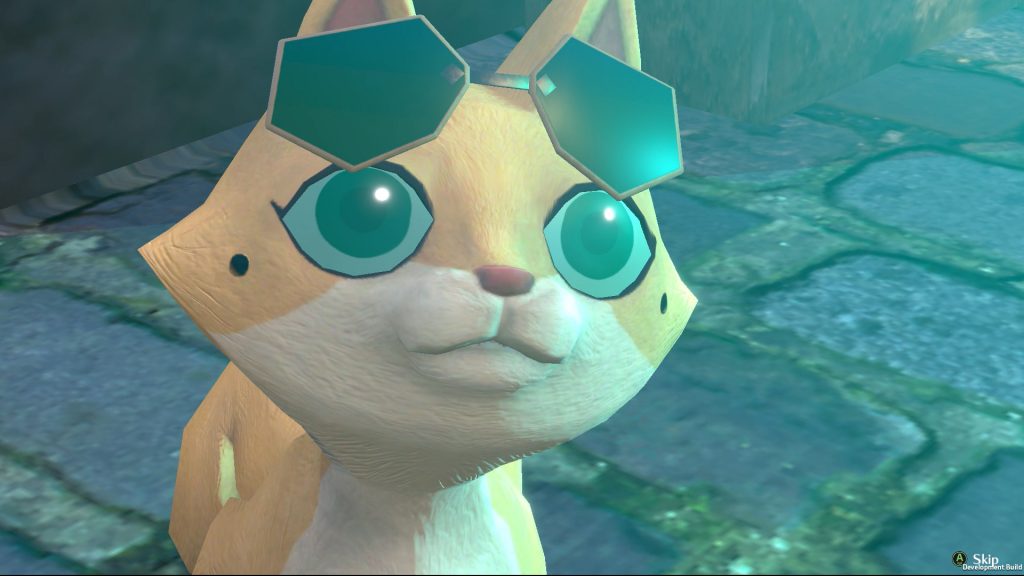 When it comes to the cat and dog mechanics, I quite like how they played into Naomi’s overall experience. There was a good balance between both cat and dog forms, where both were needed to progress. Switching between Team Cat and Team Dog meant spending time with townsfolk who aligned towards one team or the other, resulting in discounts from their shops. The NPCs were vibrant and full of personality, some I’d love to have tea with while others I’d probably shoot on sight.

All of that was well and good on paper, but in practice is where things took a slight turn for the frustrating. For one, if you accidentally skip the tutorial pop-up explaining mechanics, you’re SOL. I was a little too trigger happy and skipped the one and only text box explaining certain things, assuming controls would be remappable or, at least, explained on the options menu. Nope. Had to reload an earlier save just to replay that part. What happens if I put the game down for a few weeks and come back to it, the controls completely out of my head? I’d be screwed. Luckily, the Steam page has all the tutorial screenshots uploaded, so in the very least PC players are able to easily pick back up where they left off. 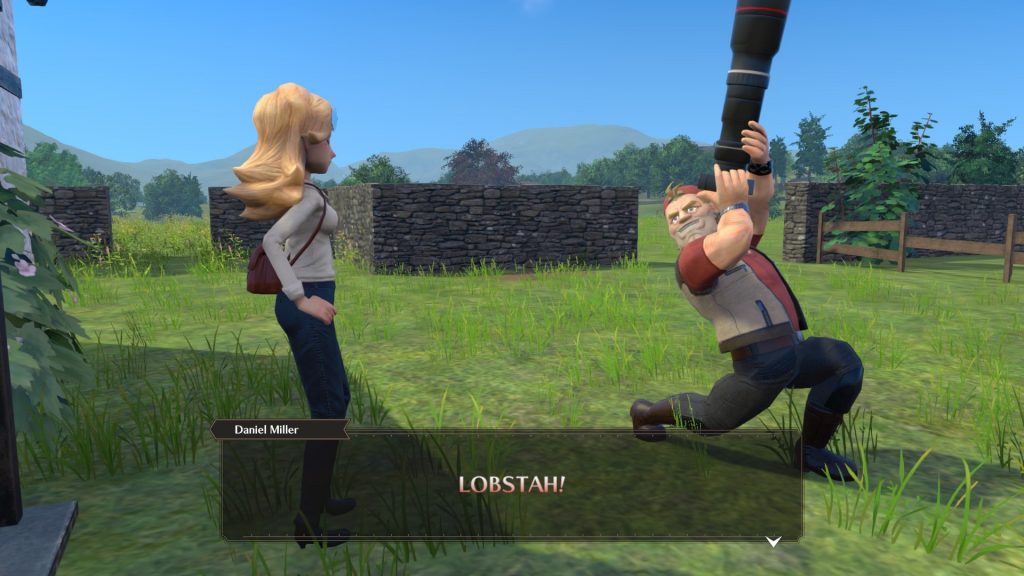 Additionally, while Naomi can lean towards either Team Cat or Team Dog, the townsfolk she interacts with to align either way don’t truly remember her from quest to quest. For such a colorful cast that fans of farming sims might find charmingly familiar, they always seem to keep Naomi at a distance, even if the player feels warmly towards them. As the residents of Rainy Woods might say, the relationship aspect of this Life Sim feels a bit “pipped at the post.”

Ah well, it’s not like Naomi’s there for relationships — she’s there to wipe £30,000,000 clean! This “Goddamn Hellhole” has a lot of English lore to uncover (centered around just about every British bit of history and mythology you could scrounge up), and Naomi can capture it all with her camera. While fulfilling assignments from her company, Naomi will have three types of quests to undertake — mainquests, sidequests, and “urgent quests” which must be completed by a certain time, lest they expire. Often, these quests are in the form of fetch quests, like gathering resources or objects for crafting and cooking, but they can also mean meeting someone at a specific place by a specific time or snapping a requested photo. No rest for the photojournalists, eh? 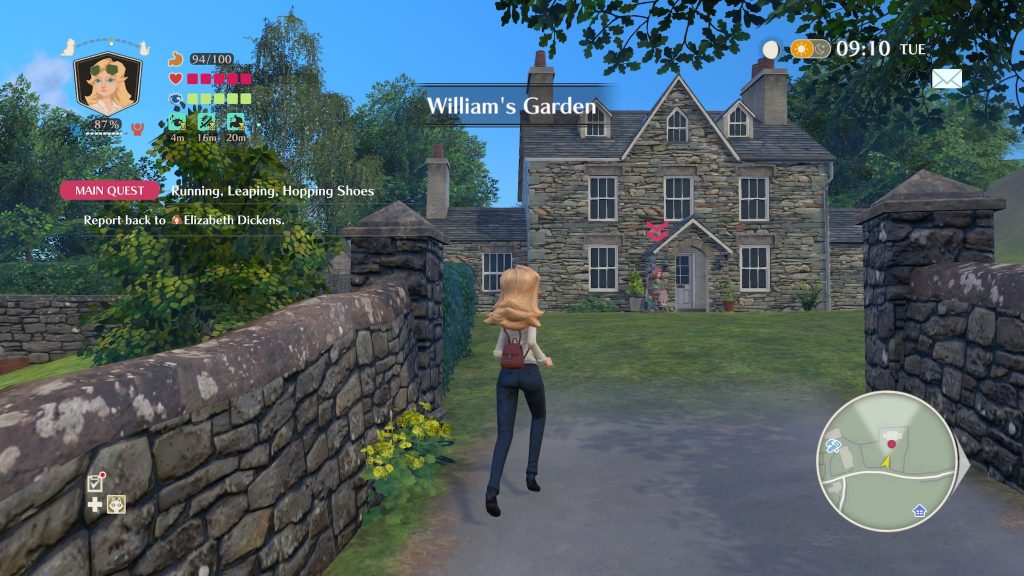 Speaking of photos, Naomi’s house has, amongst the cobwebs, a veritable relic from the 90s in the form of a personal computer with what appears to be dialup internet. It’s here she’ll get said assignments from work; additionally, she’ll also have access to the photo-sharing app Flamingo, which is an awful lot like Flickr except 1 like = £0.01. Just like YouTubers Life 2, Naomi will have to take a look at anything that’s trending at the moment, such as landscape photography, snap a photo that fulfills the hashtag requirement, then upload it to the site. The more relevant the photo is to the trending content, the more money Naomi stands to make, so snap away, debt-saddled journalist! Snap away!

Again, it’s here where The Good Life feels good when isolating the individual aspects, but combining them feels odd. I genuinely loved how The Good Life handled the trending topics mechanic, because as a photographer this made far more sense than as an all-over-the-place YouTuber. Additionally, breaking the quest system down in three separate categories allows players to rush through the game if so desired, but is actually best played if they stop and smell the roses. Sure, you can complete all the main quests right away, but you’ll spend that time strapped for cash. Why not take the game slower and enjoy Rainy Woods in the same way you’d enjoy your Animal Crossing island or Stardew Valley farm? 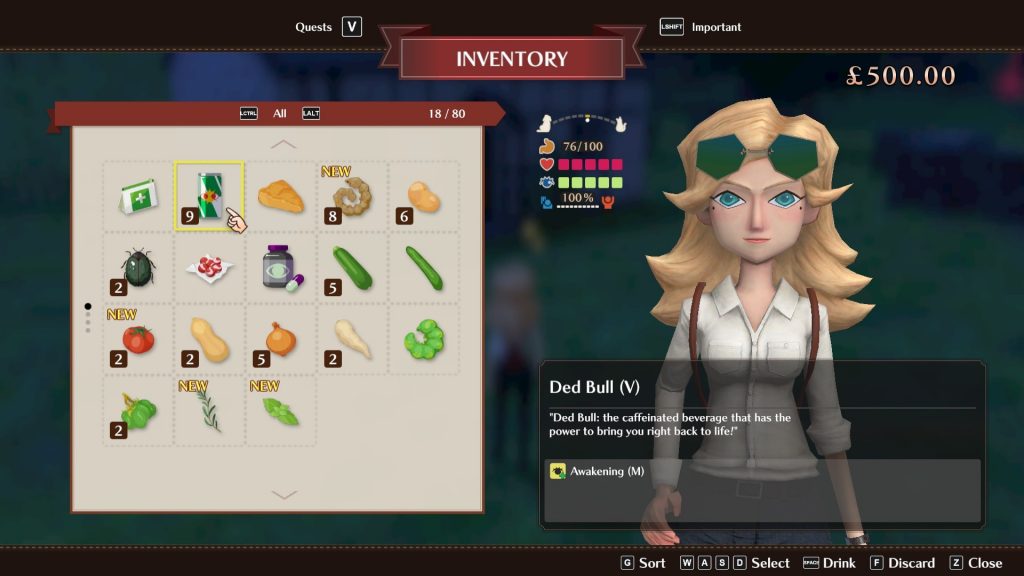 But The Good Life is no Animal Crossing or Stardew Valley — in fact, I’d say it’s closer to Little Dragons Cafe. Taking photos for cash and objectives is squeezed in-between fetch quests for townsfolk who seem to think I’m neither cat nor dog, but gofer instead. Crafting components range from somewhat difficult to come across to downright impossible to find; instead of spending time in a quaint and lovely little town, I’m off in the fields running up to trees for sap or killing tiny creatures for their fur. Which — again — would be fine some of the time, but it often felt like *most* of the time (even with dogspeed and fast travel). Even with putting off the main quest in favor of sidequests and photo duties, I constantly felt a sense of urgency, and with a rapidly emptying belly, I was always hungry as well. At least Naomi seems to never need sleep.

And yet, despite all of the elements that are fun on paper and somehow oddly balanced in practice, it all just works.

There’s plenty of room to talk about what could use some fine-tuning and balancing, but at the end of the day, The Good Life is so unique, so charming, and — most importantly — so fun. I can’t tell you how many hours I spent with The Good Life, trying to figure out its exact faux pas to be able to type up this freaking article, only to come back to “yeah it’s a little repetitive and out there but it’s good and addicting.” I can point out what is clunky about it, but I can’t say “fixing” any of it would actually benefit the game. It’s like one of those pictures composed of hundreds of smaller images — it’s best to stand back and look at it as a whole instead of focusing too hard on anything up close. Don’t overthink The Good Life — enjoy it for what it is.

The Good Life can be summed up as one of the more polished SWERY experiences. For some, that explains all they need to know; for everyone else, it’s like a fun, repetitive, sweet and sour mixture between Little Dragons Cafe, Animal Crossing, Harvest Moon, Pokemon Snap, No More Heroes III, and Katamari Damacy. So few games leave me at a loss for words like The Good Life did, yet this is somehow one of my longest articles. As a gamedev and reviewer, I’m confused. As a gamer, I’m content.

Editor’s note: This review is based on a retail copy of The Good Life provided by the publisher. 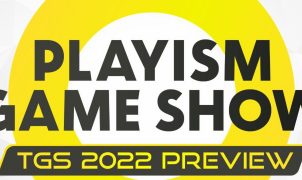