Growbot Review: The Little Growbot That Could

I’m a simple woman — I see anything that remotely looks like Machinarium, I’m an immediate fan.

And Growbot looks an awful lot like a saccharine sweet Machinarium.

Developed by Wabisabi Play and published by Application Systems Heidelberg, Growbot is “an adventure about a robot saving her home from a dark crystalline force.” With an inventive biopunk space station setting filled to the brim with interesting plants, animals, aliens, and robots, Growbot captivates with its adorable charm and beautifully illustrated characters and scenes. Although it’s a 2 – 3 hour experience at most, Growbot will delight anyone who feels called to this verdant world, richer for the experience. 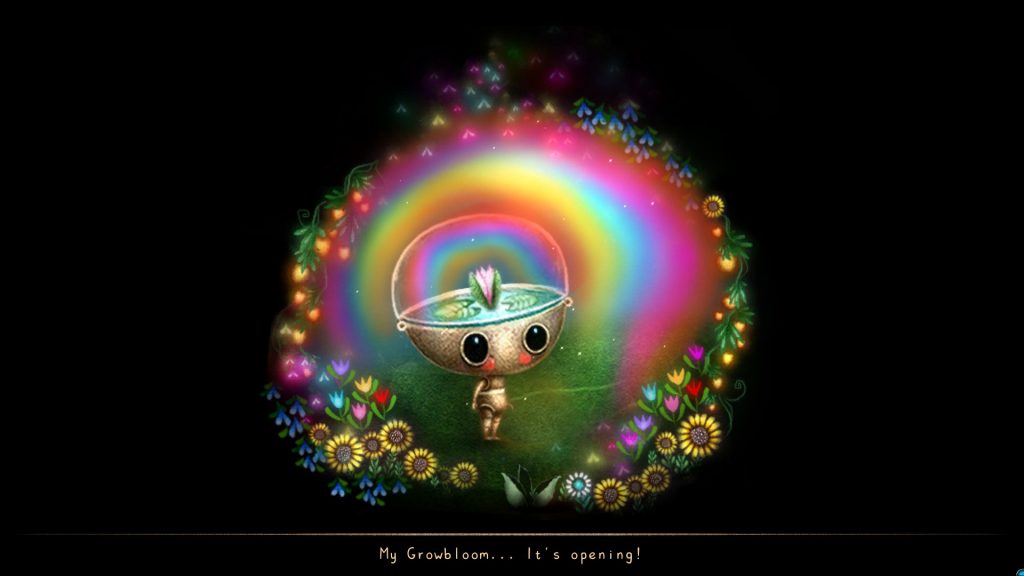 Growbot has players taking on the role of Nara, a wee little growbot who has just moved to one of the space stations that protects their home planet so that she may begin her captaincy training. Everything was normal until, out of nowhere, the whole station began to shake, causing a station-wide blackout. It would seem that Chrissy, the original growbot, has returned from parts unknown, causing problems for the station and its inhabitants. Determined to get to the bottom of things for the greater good, Nara goes in search of her friends, captain, and a way to communicate with Chrissy to determine why she’s suddenly seeking devastation.

Let’s talk about those aesthetics, as that’s probably what drew you to Growbot in the first place (I know that’s what sold me!) — they’re so enchantingly cozy, I felt like I was playing a children’s book the entire time. Fitting, as the illustrator, Lisa Evans, *is* a children’s book illustrator! The hand-drawn environments were beyond magical, I felt like I could pull a swathe of moss up like a blanket and fall asleep in this ethereal world. And the characters? Every last one a childlike delight — especially that Starbelly. I NEED a real-life one to snuggle up against and let all my problems melt away in its warm fur. I could go on and on forever about the art style and direction, but I’ll sum it up quickly: Growbot plays like an imaginative bedtime fairytale feels when you’re 7 – 8 years old. 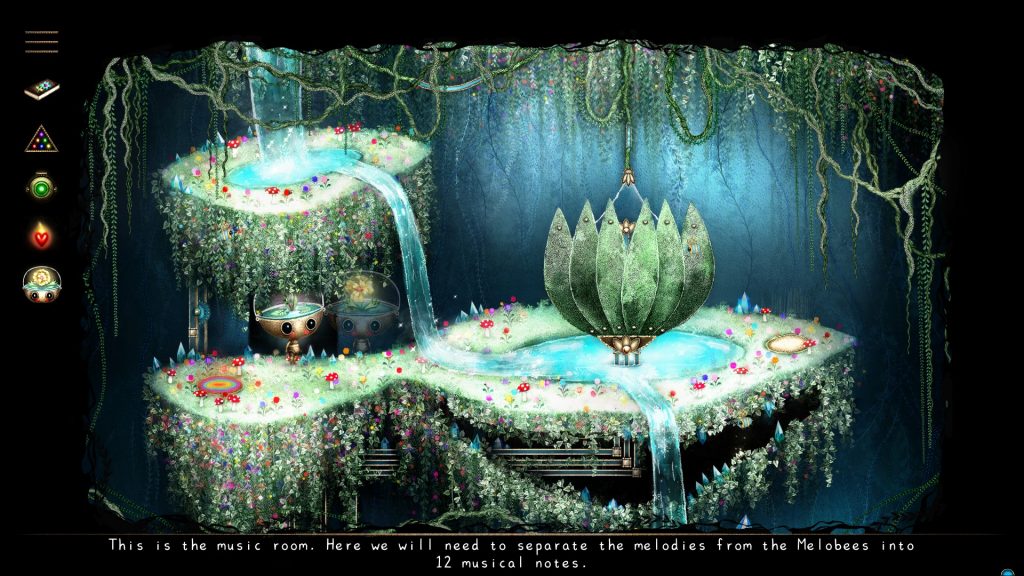 When it comes to puzzles, Growbot doesn’t disappoint. Like most point and click games, players will need to pick up objects in the environment and combine them with others for use on things like doors and other characters. Unlike others in the genre, Growbot makes a distinction between items that can be combined and items that have realized their full potential, separated on the right and left sides of the screen, respectively. I liked this little change in UI because it took out a lot of the guesswork when it came to items, meaning that the items weren’t the puzzles, *actual* puzzles were.

What does that look like in Growbot? One puzzle type has to do with collecting individual musical notes made by different flowers. By combining the notes in a specific pattern, players will compose songs that will allow them to create keys, protect others, fight through barriers, and more. Other puzzles include maneuvering through mazes, fixing clockwork gears, and mixing 3 colors into 12 distinct hues. The puzzle diversity was pretty substantial for such a small title, and nothing felt too easy yet too impossible to get through in one sitting. 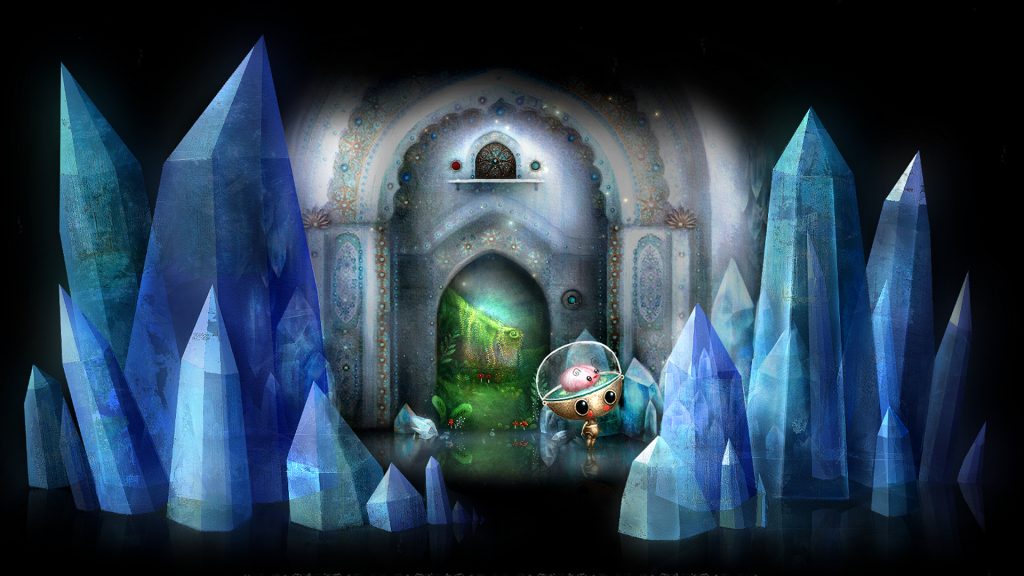 If I had one complaint with Growbot, it would be its story. Now, don’t get me wrong — the world of Growbot is extremely charming and its characters utterly enchanting, but the story’s climax was a little weak in the sense that literally everything was explained in the last few minutes of the game. The villain’s motive, identity, and everything was just kind of thrown out there at the very end, almost as an afterthought. I didn’t feel like there was a lot of cohesion past maybe the second or third environment, and it started to feel a little distracted. Now, was I also distracted by the game’s beauty? Absolutely. So I don’t want to be too hard on Growbot, as it plays out like a legitimate children’s bedtime story from start to finish.

In fact, I’d say that’s Growbot’s biggest selling point — it feels whimsically yet cozily childish in the best possible way. I was immediately transported back to my childhood bedroom, memories of snuggling up with a good book at night giving me the warm fuzzies. Sure, the story may have been a bit of an info dump at the end, but it didn’t stop the journey from being a perfectly pleasant experience. And seriously — any age me, from 3 to 30, would KILL for a Starbelly. Consider this my official petition to get a real Starbelly (or at least a Starbelly plush).

Growbot is a genuine delight that will reawaken the joy of children’s storybooks within you. Featuring stunningly magical hand-drawn illustrations and an incredibly imaginative biopunk setting, Growbot takes players on a journey filled with vibrant color, verdant beauty, dazzling light, and warm characters. If you’re looking for a cozy new world to snuggle deeply into, Growbot is ready when you are.

Editor’s note: This review is based on a retail copy of Growbot provided by the publisher.

Shogun: Rise of the Renegade Review (Late to the Game) (Mobile)

SHMUP of the Shogun   Sometimes you just need to hop in a spaceship and blast stuff to bits. The shmup (or shoot ’em up, if you’re feeling nasty)…