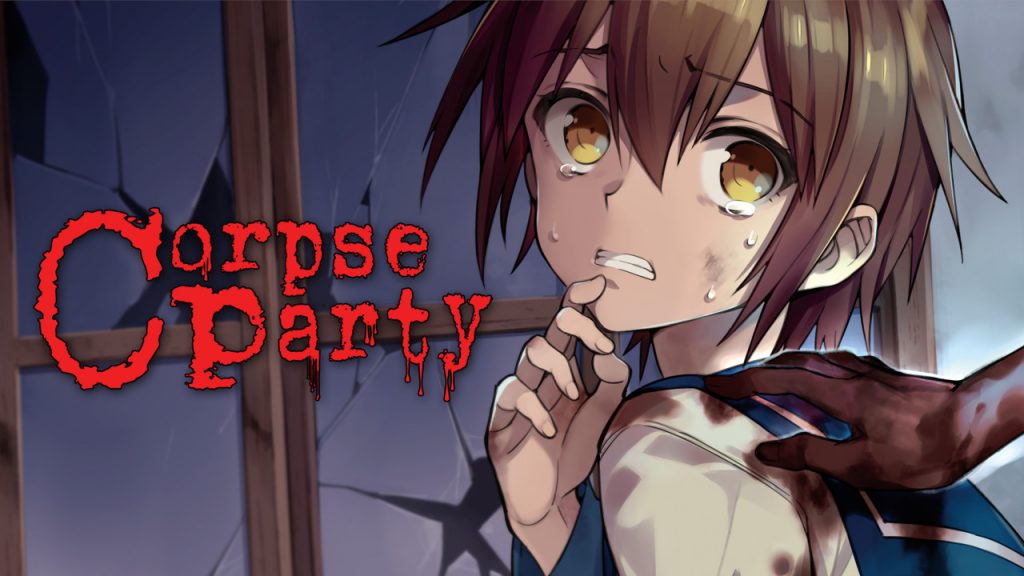 Ok, let’s get this over with. Despite being a fan of Japanese horror, and horror video games in general, I had never played a Corpse Party game before this review. Shameful stuff, I know. That’s why, when we got confirmation that Corpse Party, a game that has already received port after port, was getting a definitive edition of sorts with Corpse Party (2021), I jumped at the opportunity to dive in and finally experience the macabre halls of Heavenly Host Elementary for myself. I mean, it’s Halloween season, so it’s absolutely the right time to scare myself senseless whilst watching a gang of teenagers meet their disturbing and horrific ends, right? 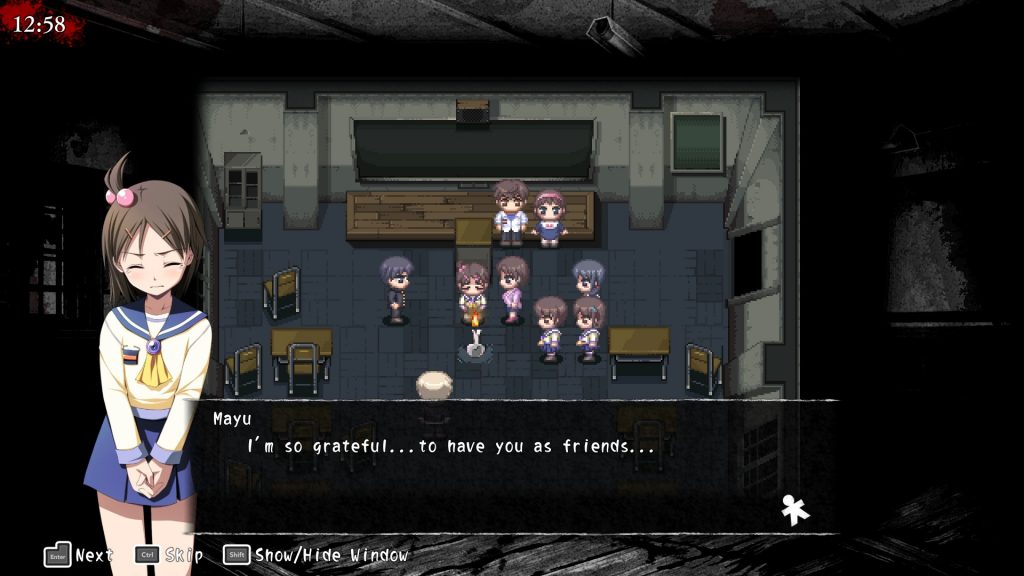 I said I hadn’t played Corpse Party before, but that isn’t due to a lack of opportunity. Corpse Party and its plethora of ports are almost meme-worthy at this stage. I won’t dig too deep into its porting history. However, just know that this is the most recent version of a title that was originally released back in 1996, having been developed by Makoto Kedoin using RPG Maker.

This version, referred to simply as Corpse Party (2021), contains updated visuals, fully voiced Japanese dialogue, and extra chapters, in addition to those extra chapters that have been added over the years via other ports. Despite the added bells and whistles, the visuals retain that 16-bit aesthetic and stellar audio that the title has become synonymous with, so the heart of the experience remains intact.

Jumping into Corpse Party (2021), I wasn’t fully sure what to expect. Over the years, I’ve heard this referred to as anything from an RPG to a visual novel, and everything in between. Having now spent considerable time with it, I think Corpse Party (2021) is best described as a classic point-and-click adventure game.

Set largely in the halls of Heavenly Host Elementary, Corpse Party (2021) follows nine teenage friends as they gather in Kisaragi High School one evening, to see off their friend Ayumi who is enjoying her final day in Kisaragi High before transferring to a new school.

Ayumi is a fan of all things occult, and as such, brings her friend in on a ritual that is intended to ensure they all remain friends for life. As expected, things don’t pan out as intended, and the nine friends all find themselves getting teleported to the dilapidated and corpse-filled halls of Heavenly Host Elementary. This is a school that previously sat on the site of Kisaragi High and was once the centerpiece of a horrible tragedy.

I won’t delve into any further story details, as Corpse Party 2021’s absolute greatest strength is its disturbing, upsetting, and horrifying narrative. However, what follows is a gut-wrenching tale of nine friends all pushed to their limits, as they uncover the horrible history behind Heavenly Host Elementary whilst seeking to escape its cursed halls. 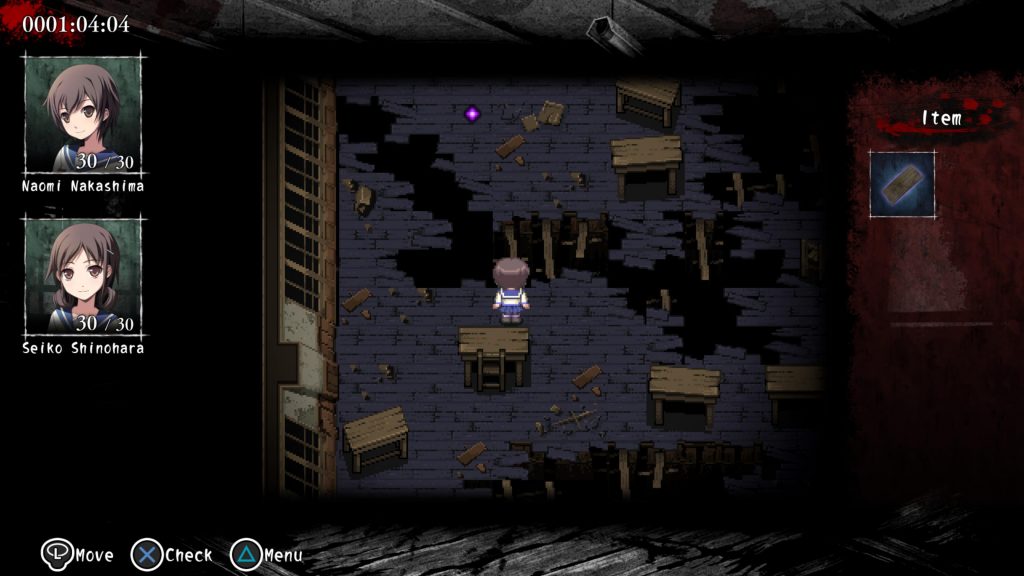 This unsettling journey largely plays out through a mix of point and click adventure mechanics and visual novel story delivery. From an actual gameplay perspective, Corpse Party (2021) is pretty basic; players will spend most of their time exploring the school halls, inspecting the environment for clues and items, and then using those clues and items to solve puzzles and access previously inaccessible areas of the map.

As you might expect from this type of experience, there is a lot of trial and error involved, and expect to frequently be left scratching your head having combed through the school numerous times, unsure of what you need to click on to progress. Whilst this could be a point of frustration for some, I actually think it works for Corpse Party 2021 due to how it handles story progression.

The story is split into five chapters, each giving you control of some combination of the nine protagonists. Starting on chapter one, the only way to unlock chapter two is to unlock the true ending of chapter one, with this progression system continuing until you have finally hit the true ending for chapter five. I use the term “true ending,” as besides the canon ending needed to unlock the next chapter, each one also has numerous “wrong endings.” It’s these wrong endings that make the trial-and-error nature of Corpse Party 2021 work so well, as interacting with the wrong piece of the environment or solving puzzles in the wrong order is generally how you stumble across these alternate conclusions to a chapter.

This sensation of unpredictability means that even when you find yourself going about things incorrectly, you’re often rewarded with alternate story beats or insight into the characters which you would have otherwise missed if you had just managed to get the true ending straight away. It’s a title that rewards experimentation, as breaking the sequence of events needed to unlock the true endings doesn’t just result in you hitting a roadblock, it tends instead to use these opportunities to horrify you further.

See, wrong endings are often where Corpse Party 2021’s descriptive text and visual novel storytelling are at their strongest, as more often than not, they usually result in the untimely deaths of whatever protagonists are in your party at the time. It’s difficult to explain how profoundly disturbing some of these death descriptions are. One particular wrong turn I took resulted in one of the kids falling through a hole in the floor to his death, with his younger sister, whom he shared a deep connection with, jumping in after to save him. The game pulls no punches in describing the final moment of these doomed siblings, and honestly, the quality of the descriptive writing does a far better job of communicating the gravity of the situation than any cutscene would be able to do.

The overbearing nature of the writing is indicative of Corpse Party 2021’s atmosphere and storytelling chops across the board, and it’s these assets that really elevate the title from being a standard point and click adventure, to one of the best horror games I’ve ever played.

Writing To Make Your Skin Crawl 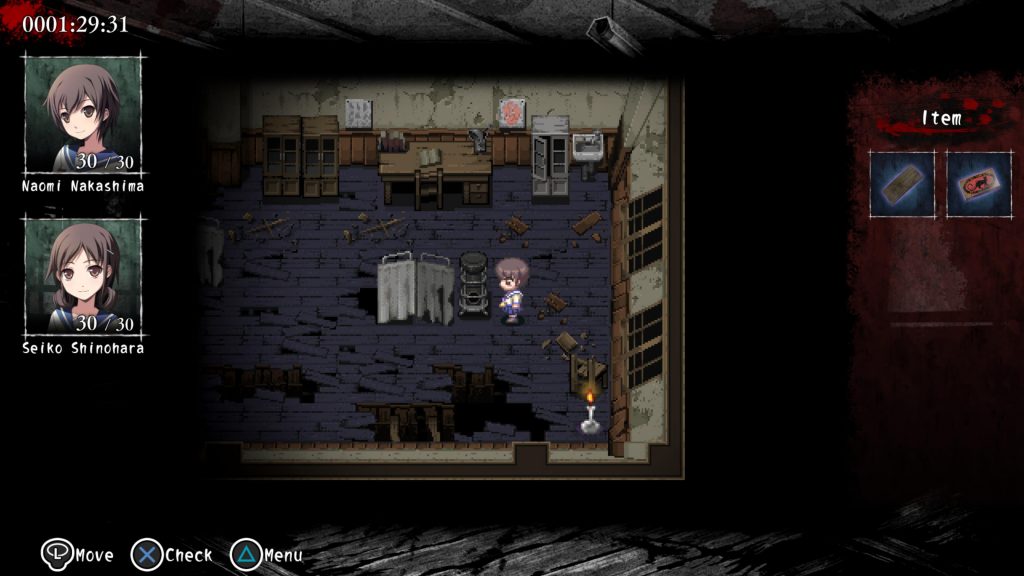 I’m going to avoid story spoilers, but know that Corpse Party (2021) goes to some truly dark and twisted places in terms of its narrative. I’m not easily shocked, but even I found myself unsettled by themes of child mutilation, possession, suicide, and even cannibalism, which crops up at one point. It’s to the credit of the excellent writing that the subject matter never feels tacky or forced. Often these types of themes come across in horror media as being used purely for shock value, but Corpse Party 2021 weaves them into its narrative in a way that never feels out of place.

The characters are thankfully as well written as the overarching narrative. Death can come quickly in this world, and the writers have gone to great lengths in delivering characters who have depth and personality, which in turn, makes those uncomfortable death sequences hit that much harder when they do arrive.

Complementing the brilliant writing, are the visuals and audio. Whilst the visuals are admittedly basic, even by 16-bit standards, they work perfectly, as they allow the writers to do the heavy lifting. My favorite horror movies and games are always those which leave a little to the imagination, and Corpse Party‘s simple visual style is the perfect vehicle for letting your mind fill in the gaps as you soak in the rich and detailed text that accompanies each horrific moment that occurs on screen.

I mentioned the audio also as it plays a huge role in immersing players. The use of binaural 3D sound really brings the world to life, and playing with headphones frequently brought chills to my spine along with goosebumps to my skin. Whether it was environmental noises such as scratching at the walls, creaking floorboards, or hearing the whisper of an invisible entity in my ear, I would frequently find myself thoroughly creeped out due to how effectively sound is used.

Having finally experienced the macabre world of Corpse Party, and crept through the cursed halls of Heavenly Host Elementary, I can honestly say that Corpse Party (2021) ranks up there with my favorite horror games of all time. The trial and error gameplay may frustrate some. However, the incredible writing and rewarding exploration make this a must-play for horror fans this Halloween. 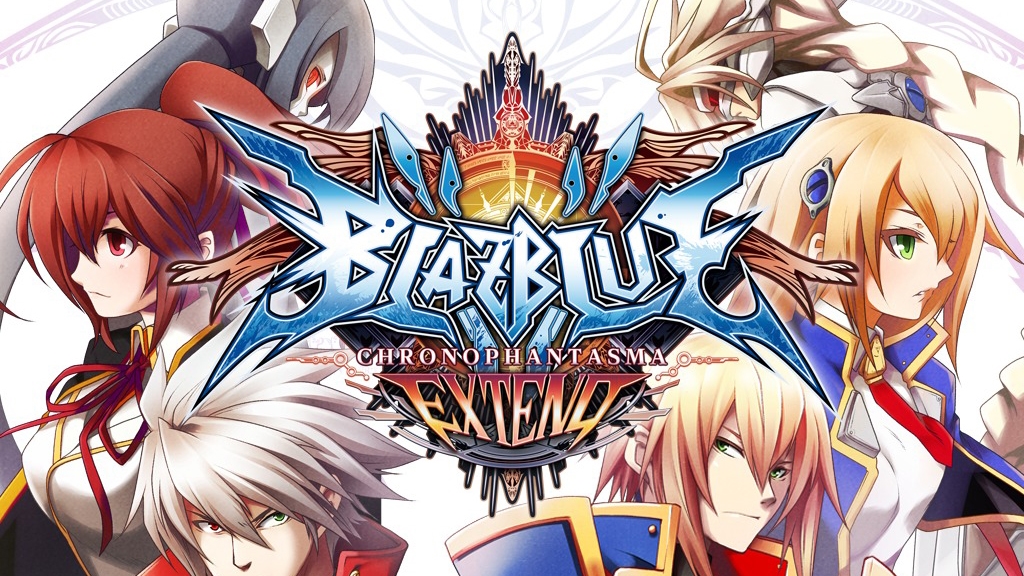