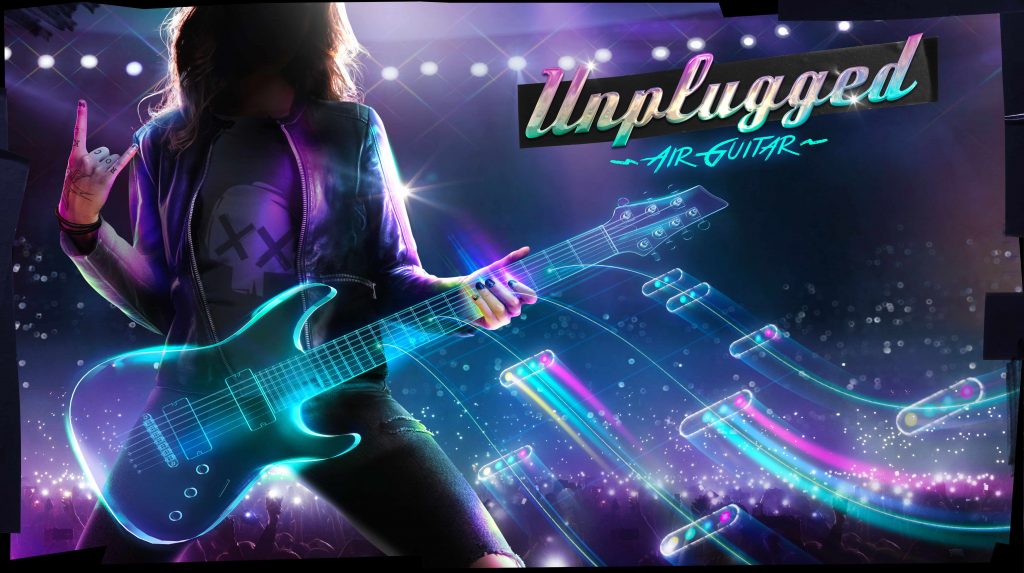 Love Guitar Hero? Unplugged, on Oculus Quest 2, is a familiar return to the tried and tested rhythm-based games formula. Only instead of wielding a plastic axe, you’re charged with shredding notes on your very own air guitar. Yes, that’s right, bring a pair of hands, as Unplugged is the most ambitious application of the Quest 2’s hand-tracking feature to date.

I can hear the more scrupulous of you in the back shouting that you don’t think it’ll work. Well, you’ll be surprised to learn that after several hours with the game, it works far better than you think it would.

Fret Not, It Works! (Most of The Time) 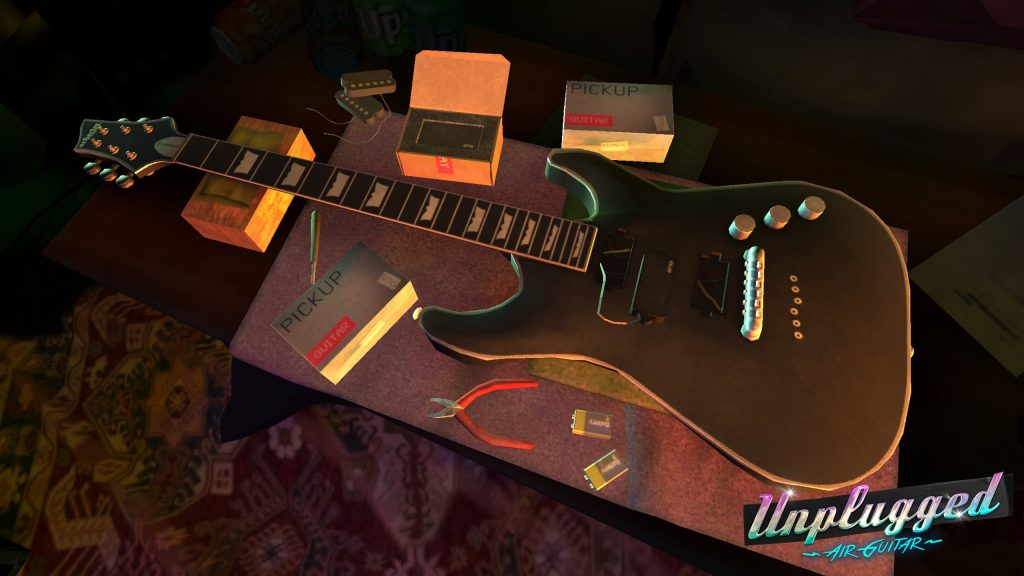 Not Enough Air In This Geetar

Unplugged functions similar to games in the Guitar Hero franchise, which is unsurprising, given Marcus Henderson, of Guitar Hero fame, returns to development duties. The game works by having you use your hands to position your air guitar, and then create chords with your fingers whilst strumming with your other hand. On lower difficulties, this is achieved by blocks of four or three-finger chords, spaced gently across a familiar-looking note highway.

As you progress through the game, the difficulty ramps up, and you’re introduced to hammer-ons and pull-offs, which don’t require strumming, but need you to shift your finger position quickly to play the appropriate notes. There are even sustained notes, where you make a chord, strum, and then have to hold your fingers in place to hit it.

By far, the most satisfying part of Unplugged is when you’re shredding through a face-melting guitar solo. The game throws dozens of notes at you on the highway, and it’s your job to rapidly move your fingers across the frets, usually doing hammer-offs, to the tune of tracks that probably dominated your childhood.

Make no mistake, while it initially feels strange playing the game without an actual guitar in your hands, Unplugged fulfills the air guitar fantasy I never knew I needed: but this isn’t without caveats.

Latency To The Party 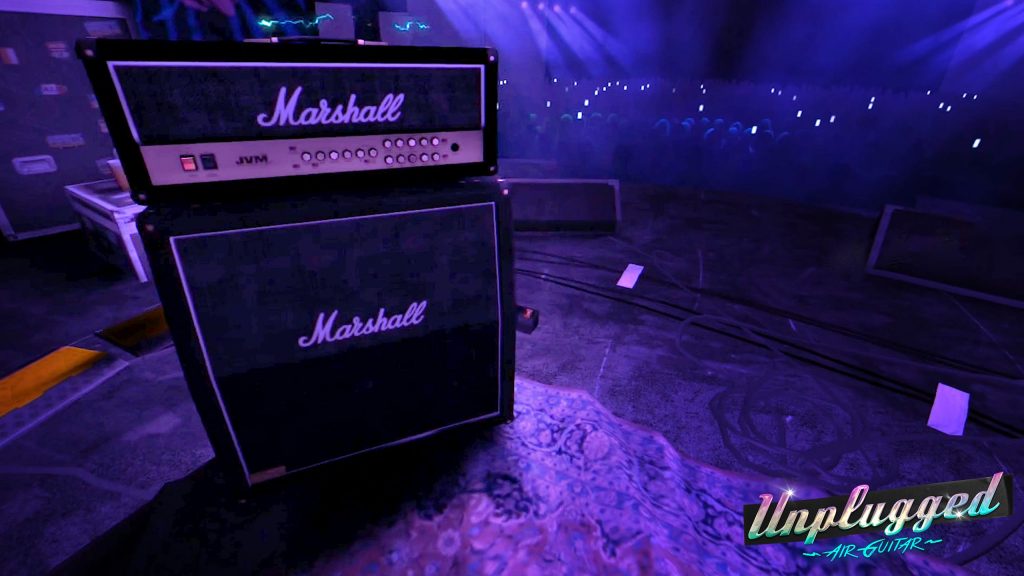 Unplugged is a very difficult game. Now, I can hear the more boisterous of you screaming at me to ‘git gud.’ But I think this is down mostly to the technological limitations of the Quest 2. While Oculus’ headset is an impressive bit of kit, hand tracking remains a relatively new feature.

At times, Unplugged struggled to find my hands. Despite developer Anotherway weaving in a clever tutorial to remind you to wear sleeveless clothing and play in a well-lit room, the latency I experienced felt like it had more to do with hitting the notes themselves.

On the higher difficulties, I felt like I got more success by strumming slightly after when notes on the highway.

But I think developer Anotherway could do more to explain the ideal conditions required to enjoy success. For instance, what’s the ideal tracking position for your guitar? When I play guitar in real life, I often sling it quite low, but for Unplugged, having it much higher seemed to help with tracking. Next, do you pretend to hold a pick to strum? Or will it work with fingerpicking? I found the latter to be more successful, which took some trial and error because in-game, it shows a pick for your strumming hand.

Nonetheless, Unplugged feels way ahead of its time. Outside of tech demos, hand-tracking hasn’t really hit the mainstream yet, so it’s worth bearing that in mind, that the game is at the bleeding edge of VR tech. 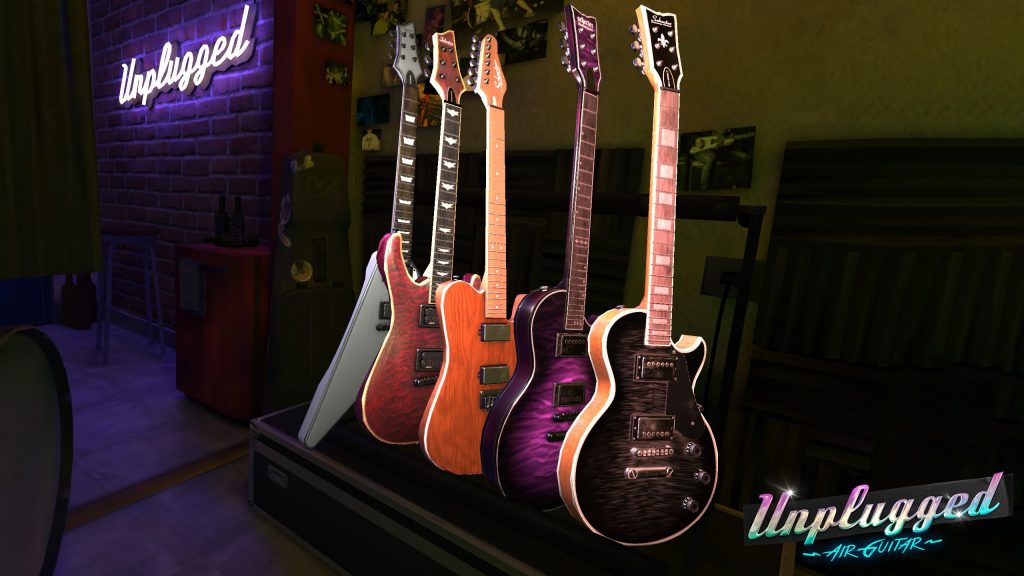 Don’t let the tracking issues put you off: Unplugged is a great game with a small, but smashing setlist. In total, there are 23 tracks to rock your way through, including The Kids Aren’t Alright by The Offspring, Should I Stay or Should I Go by The Clash, and Free Bird by Lynyrd Skynyrd.

The only annoying thing is that many of the tracks are gated behind unlockable criteria. When you load up the game, only five tracks are available, and you’ve got to work your way through a series of challenges, such as hitting 50 notes in a row and completing five songs to unlock the next batch of tunes.

I can understand why Anotherway did this – to help train players on how to actually play the game properly – but what I do miss is a quickplay mode, to riff my way through the other tunes I love.

All these tracks are underpinned by a well-executed Guitar Hero/Rock Band-esque campaign. In it, you’ll make your way from playing in bars, all the way to proper stadium tours. And to get there, you’ll need a good mentor. Steel Panther’s Satchel fills this role, dropping in to give you his unique brand of over-the-top and campy pep talks. It actually works really well, and I found his interventions a welcome diversion instead of being prohibitive.

First impressions matter: from the people you meet, the look and feel of a restaurant, or the state of that used car you’re buying. Unplugged delivers that spark, that flutter in your chest, those hairs on the back of your neck that stand up, as you fire up the game and crunch your way through its 20-ish tracks.

After a few drinks at a gig, the air guitar inevitably comes out, as I’m screaming lyrics to some of my favourite tunes. Now, I can do this in the comfort of my own home, without inflicting this misery on other people – and so can you!

I know I mentioned it came with a few technical issues. But yourself a favour and try not to think about them too much. Unplugged is pure unadulterated fun. It’s also a glimpse into the future of VR technology, and it’s inevitable that the game will have tracks and updates added to it as the developer’s process player feedback.

Editor’s note: This review is based on a copy of Unplugged provided by the publisher. 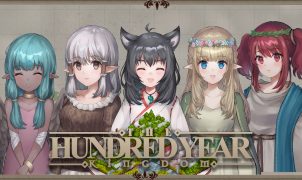