Rogue Lords: The Aristocracy of Roguelikes

Most games give you the opportunity to play as either a hero or an anti-hero. There are a few that let you play as someone fiendishly evil, but Rogue Lords goes one up on those by letting you play as the devil himself. Banished for years back to the depths of hell, Satan has now returned to Earth to wreak his revenge on the virtuous do-gooding demon hunters led by the legendary Van Hellsing. As the Devil, you’ve got a rapaciously roguish roster to do your bidding, including the likes of Dracula, Bloody Mary and the Headless Horseman.

Each campaign mission has you pick three villainous denizens to send out to traverse a map segmented into sections. Each section of the map contains an encounter you need to complete before proceeding forward. 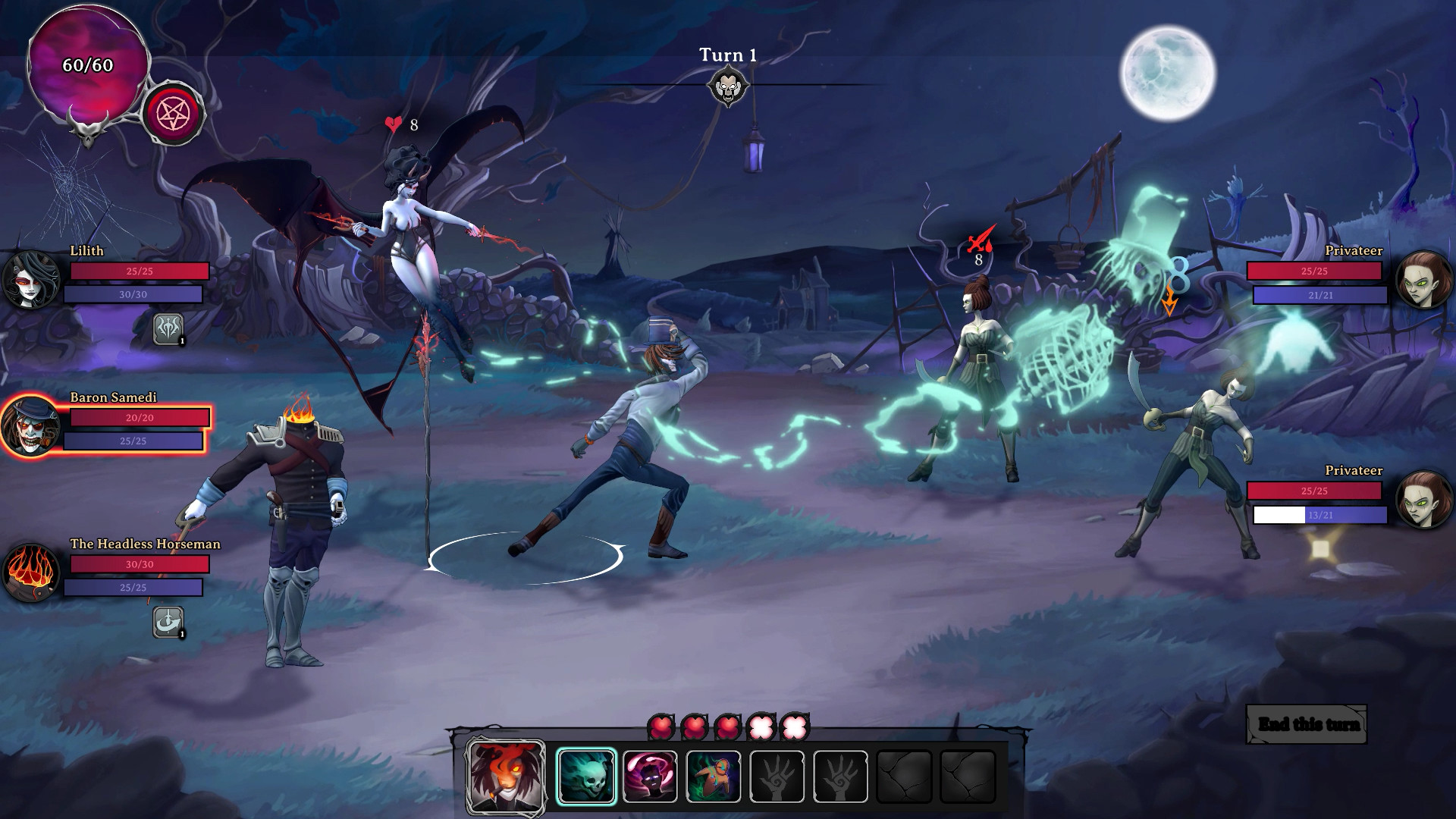 Every map is very much like a winding river with several points where you can choose which type of event you want to go to next, but all branching paths eventually lead to a big boss battle at the end. In this way, each map you traverse is a lot like a playthrough of the roguelike classic FTL. When one of your party takes a high amount of spiritual or health damage when they are already vulnerable, it will drain the Devil of all his diabolic essence and result in a game over. This means you can potentially lose a good few hours of progress from a critical mistake or run of bad luck (also much like FTL).

Rogue Lords has something RPGish about it in how you manage a party of three characters selected from a wider roster, who can gather gear to improve their stats and partake in social interaction. However, it’s also got a roguelike-ish flavour in the way the central challenge is conserving ever-dwindling resources for survival, and simply hanging around less dangerous areas to grind up your stats on low-level enemies isn’t a possibility.

Though there is a storyline running through each mission unfolding via little storybook style segments occurring periodically through each map, it’s fairly light on the ground and doesn’t interfere with those who want to get right into fighting the forces of good.

Battles are conducted in a sportsmanlike turn-based fashion, and you’re even able to see what actions your foes are planning in their next turn so you can take action to counter it. Characters act based on your “action points” and can use skills based on how many points they cost to use. This allows for some pretty cool possibilities in battle. The Headless Horseman can gain one ability that inflicts the “zombie” status on all foes, meaning any healing they’re about to do will instead cause damage to themselves. Skills like this can turn a seemingly invulnerable boss into a suicidal one. Battles are never simply about simply piling damage onto your opponents, but rather having a well-balanced arsenal of skills and using them at pivotal moments. 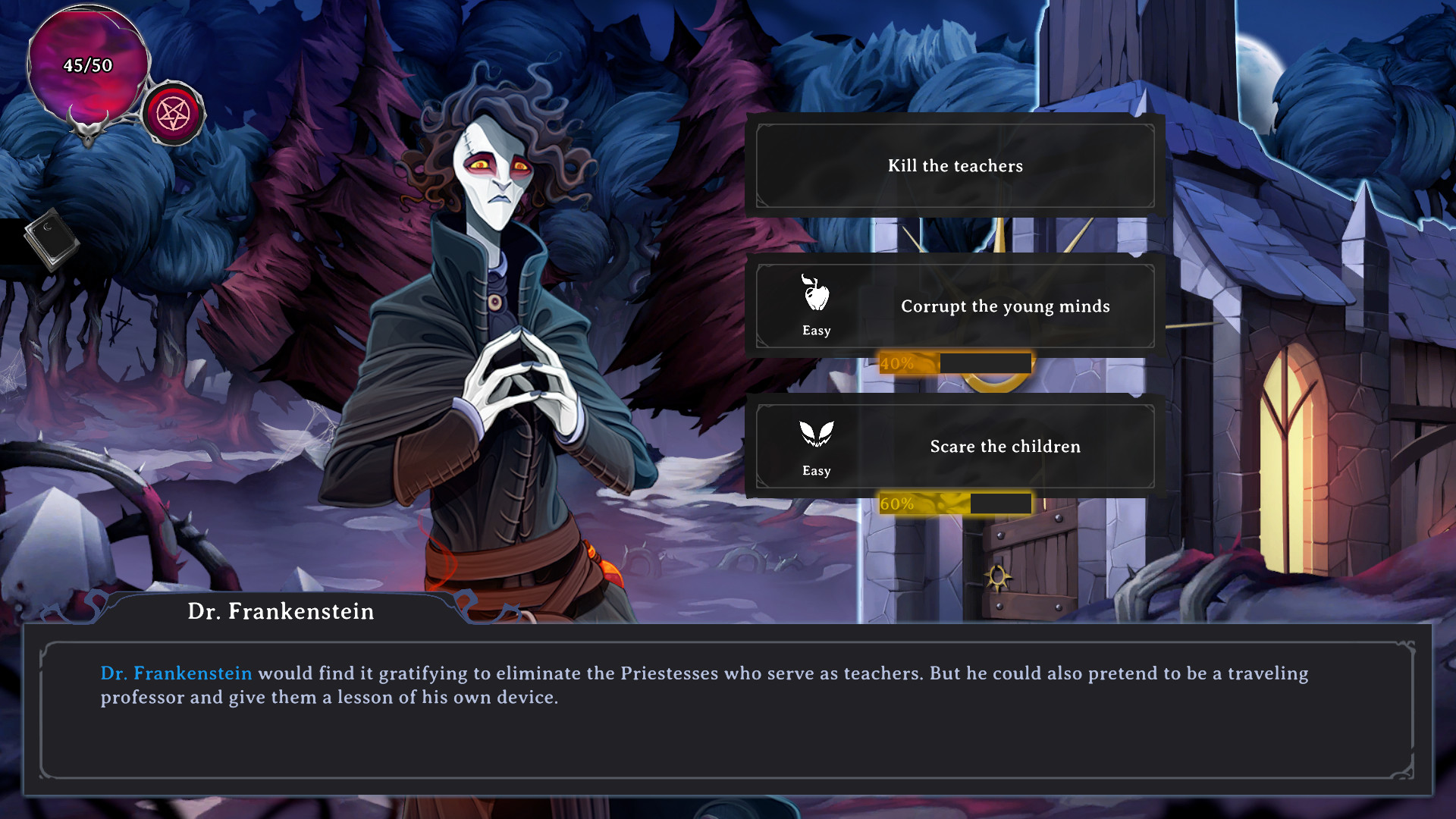 Increasing a character’s stats isn’t done in a conventional “levelling up” fashion. Certain events and combats allow you to gather “soul points”, which you can exchange with the Grim Reaper for various artefacts and new skills. However, there’s always a strong element of risk and reward when trying to advance your character. Combining three of the same skills will make a more powerful version of that skill – that’s the standard way to do it, but a riskier way is to pay the grim reaper a small fee to hold onto it for you and upgrade it for you the next time you meet him. Since this can seriously nerf your character in the short-term, it’s a difficult choice to make.

There’s also sacrificial altars, where you not only sacrifice a skill, but sacrifice your chance of ever finding that same skill again in exchange for that disciple gaining an extra skill slot.
Since it takes a refresh action to use your depleted abilities again, having more skill slots can be crucial. I was pleased how improving a character is never just some mindless grind, but always a important decision to be made.

Likewise, here are also powerful artefacts to be gained. Often these artefacts will grant great power, but will require you to adapt your playstyle to best make use of them. The war horn artefact gave extra damage to my disciples in every turn where each of them acted. This meant I had to favour them using low AP skills so they’d all be able to get their actions done, but it resulted in truly terrifying damage bonuses several turns into the fight. With a clever combination of artefacts and skills, your disciples can become truly fearsome using strategies you’ll make up on the fly through each map. 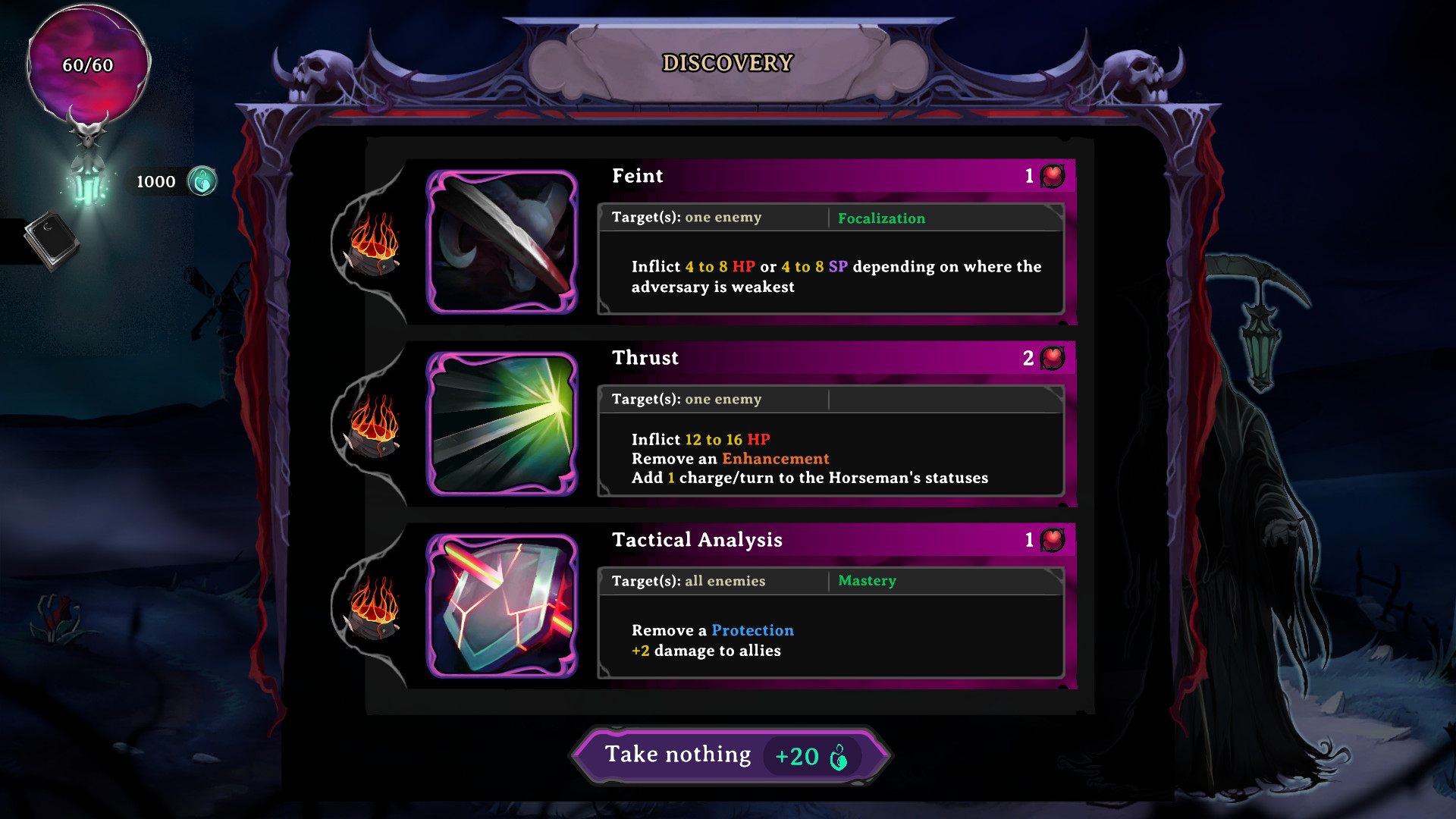 One factor that distinguishes Rogue Lords from your bog-standard roguelikes and RPGs is the ability to enter Devil Mode. With a click of a pentagram-emblazoned button, the screen will turn a fearful crimson and the very nature of reality will become malleable. In combat, this mode will allow you to swap status effects from friends to foes – reduce or increase the hitpoints and spirit points of any creature on the board.

One combat I simply swapped a damage-halving “Wall” status effect from an enemy boss to an ally, saving him from incoming death and making the boss vulnerable to double the damage for a relatively low expenditure of essence. Cunning moves like this can turn the tide of combat in the blink of an eye and are very satisfying when you pull them off at just the right time. It’s definitely an interesting mechanic that can really allow the player to be creative with how they win battles.

Likewise, Devil Mode can be used to alter your percentile chance of achieving certain outcomes in social interactions as well. Early on, you can do something particularly evil with this ability. There’s a town with a young lad who aspires to one day become a demon hunter and wipe evil creatures from the land. Using the hallucinogenic powers of one of your minions, you can either frighten him into running away or mind-warp him into betraying his demon-hunting mentors and killing them. Though simply scaring him off is the easier option with a higher percentage chance of success, the use of Devil mode can turn the harder option into a 100% certainty. I thusly was able to force him into into a mind-warped murder spree. Good times!

Diabolic essence points are regained by drinking from the fetid waters of the River Styx, and you’ll find these areas helpfully placed around each map, though they’re spaced out enough that you’ll need to make tough choices of when to use Devil mode. Do you blow all your points getting the artefacts from social interactions that’ll benefit you long-term or do you conservatively keep them all as an emergency fund for combats? It definitely adds a sense of tension to every map and gives the player a feeling of cunning for having manipulated reality to their advantage. 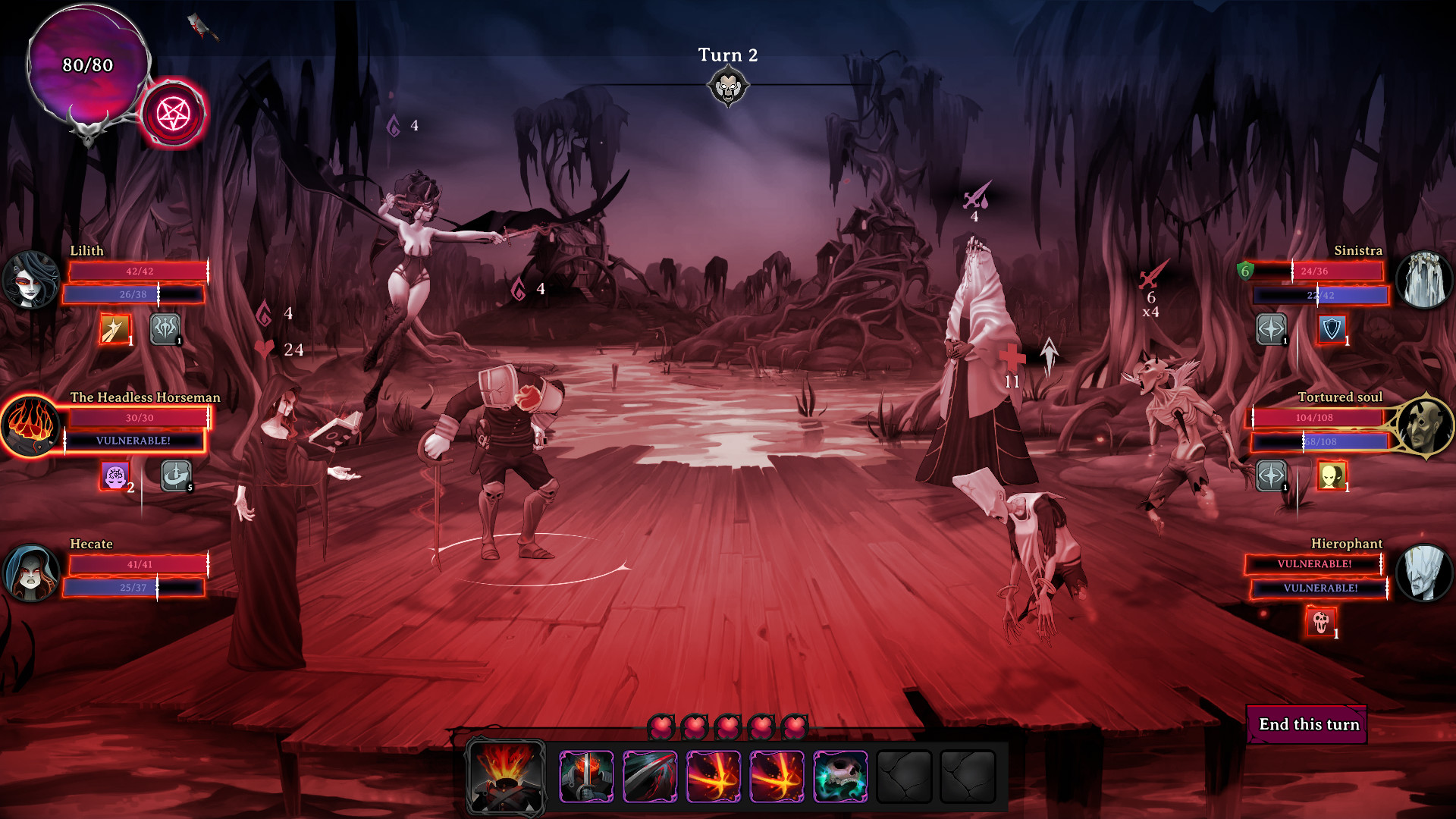 You’ll start to see social events getting recycled an hour or two into playing. I think this is, perhaps, the main weakness of Rogue Lords. There aren’t really any side-quests and it feels like something of a missed opportunity that there isn’t more distinctive character interaction between the dastardly disciples of the Devil. Why not have a side-quest where Lilith teaches Bloody Mary the art of seduction or Dracula starting a doomed love affair with a mortal woman?

All the events end up feeling somewhat interchangeable, and each map doesn’t have the flavour it could have had if the disciples had more unique reactions to each location. The distinctiveness of the characters is provided mainly by heavily repeated lines of voice dialogue, and I’ll have to admit it gets a bit maddening to hear Bloody Mary asking “What GAME are we playing?” for the hundredth time. This is why Rogue Lords is probably an apt name for the game, since it appeals more to those who like survivalist number-crunching roguelikes, but may let down those hoping for more character-driven sidequests and plotlines.

Rogue Lords is an innovative mix of roguelike and RPG elements with clever new concepts to tax your tactical mind. There’s a constant one-more-encounter compulsivity as you look to make your band of villains ever more powerful, and a huge scope for creativity provided by the reality-bending devil mode. For an entertainingly strategic experience where you have free license to indulge your dark side and wreak havoc with a variety of ghosts and ghouls, Rogue Lords will sate your wicked desires.

Full Disclosure: This review is based on a copy of Rogue Lords given to Hey Poor Player by the publisher