Tandem: A Tale of Shadows Review: Tim Burton would be proud 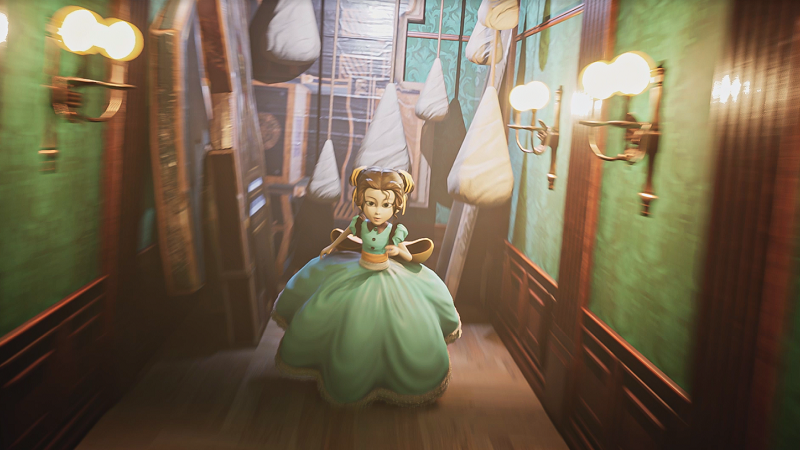 Once upon a midnight dreary, Emma pondered, weak and weary,
Over a many curious volume of Kane family lore–
While she researched, bedtime stalling, suddenly a sound appalling
As if some one steeply falling, falling through a carriage door.
“‘Tis an ally!” Emma stuttered, “falling through that carriage door–
together, that house, let’s explore.” 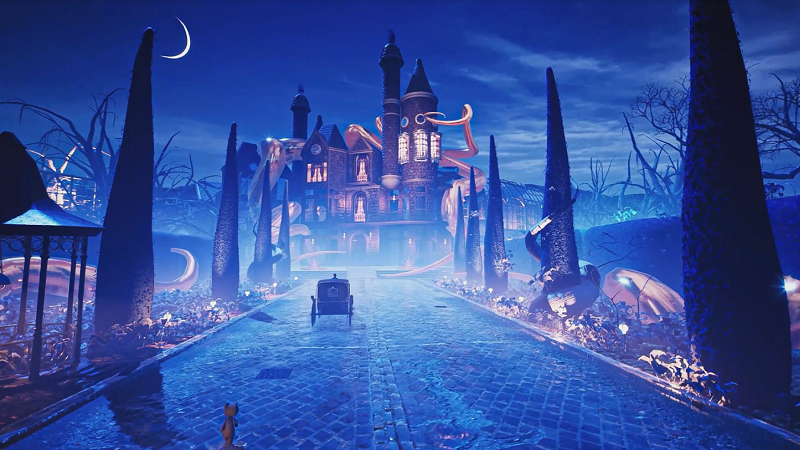 So begins Tandem: A Tale of Shadows, a puzzle game where players will need to control both Emma and her mysterious teddy bear ally, Fenton, as they make their way through a magical mansion in search of a missing boy, Thomas Kane. Promising to “redefine the puzzle platformer genre with a unique gameplay and exceptional aesthetics,” Tandem: A Tale of Shadows requires players to think in more than one dimension in order to get through his haunted house. Available on PC and console, Tandem: A Tale of Shadows offers about 5  – 10 hours of creepy-cute puzzles for a launch price of $17.49 (regularly $24.99).

As previously mentioned, Tandem: A Tale of Shadows has players taking on the role of two characters — Emma and Fenton. Instead of working together on the same plane, however, Fenton has essentially been banished to the shadow realm, which is a bit to the left of Emma up on the wall. Ironically, this banishment is actually a boon to the duo, as progressing through the layers of this mansion will require some puzzle-solving skills in both dimensions. If you’ve played Toodee and Topdee, you’re already familiar with this kind of gameplay, but with a light twist — literally. Fenton can walk across shadows, so Emma will need to maneuver lanterns, lamps, and more to cast those shadows for Fenton to cross, enabling the pair to get from one end of the level to the other. 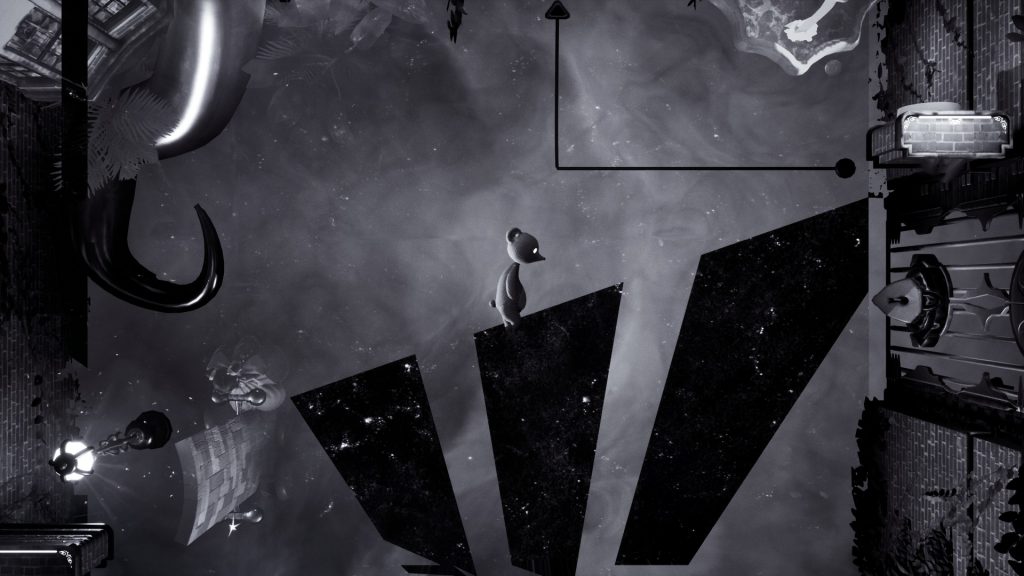 As Emma and Fenton make their way through the distinct levels in the mansion, such as the Gardens, Boiler Room, and Kitchen, new threats will appear to thwart the pair’s progress. Spiders with laserbeams attached to their heads patrol the grounds, ready to spin Emma in to a silk cocoon for a midnight snack later, while terrible toys with ghastly grins await them within. Although Emma is usually the one moving around lamps and lanterns to cast shadows for Fenton, it’ll often be Fenton pressing and releasing switches that will save Emma from certain doom.

Tandem: A Tale of Shadows’ puzzles are simple at first, but gradually up the complexity as time goes on. As long as you don’t take year-long breaks between sessions, it’s easy enough to jump back in after stretches away, as not only are the controls easy to learn, they’re remappable for each player’s individual comfort and convenience. I don’t think I ever felt truly stumped on any puzzles, as the best teacher for the one I was working on was the puzzle I had just solved. Because of that, Tandem: A Tale of Shadows has fantastic momentum — you’ll find it hard to pry yourself away from the game, thinking “I’ll just do one more,” after each level. 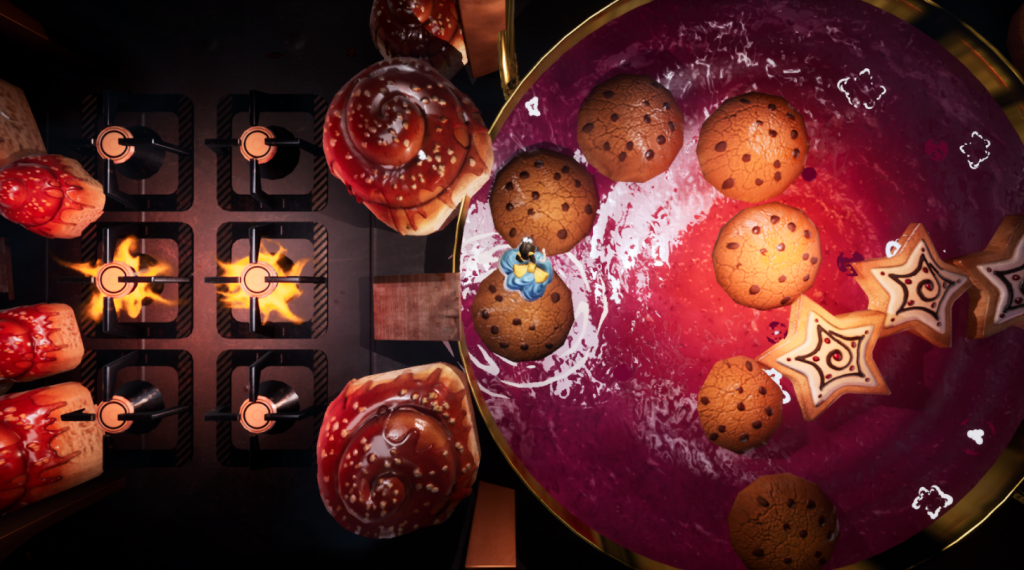 One of the things that really stuck out to me about Tandem: A Tale of Shadows were the aesthetics, as it’s very Tim Burton-esque in both audio and visuals. I feel like there was once a time where you couldn’t escape this general creepy cute vibe that’s captured very well here — two cute protagonists against the backdrop of a spooky mansion — so that’s sure to win over a lot of fans of things like Nightmare Before Christmas and Corpse Bride. And while the music is usually thematically ambient, I couldn’t help but notice some clear Danny Elfman inspirations, like the odd choral bits here and there. Although it’s clear Tim Burton himself didn’t make Tandem: A Tale of Shadows, it kinda feels like something he’d approve of.

I don’t really have a lot of complaints about Tandem: A Tale of Shadows — it’s a competent puzzle platformer that creates a moody atmosphere and tells an interesting story. I think the one thing I was really missing was being able to see the environments from Emma’s point of view. The player’s POV was constantly top-down on Emma, side-view on Fenton, so I wished to see these whimsically creepy environments from a “normal” viewpoint — not just in cutscenes. I know the sets were designed with this top-down view in mind, so seeing them head-on might be weirder than expected, but I just feel like it would have helped my immersion to see what Emma’s seeing.

Tandem: A Tale of Shadows is a fun puzzle-platformer that will absolutely please fans of the genre and/or Tim Burton. Don’t let its creepy cute demeanor fool you — these puzzles are definitely on the cerebral side and will take some time to tease that solution out. I can see this being a terrific Halloween title for streamers who don’t love the typical scary fare for this spooky holiday but still want to please their followers. In the very least, this little treat has a few tricks up its sleeve that make Tandem: A Tale of Shadows worth the price of admission.

Editor’s note: This review is based on a retail copy of Tandem: A Tale of Shadows provided by the publisher. 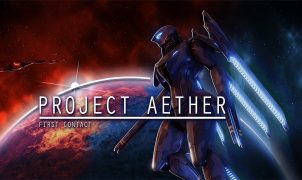