What is it about roguelike deckbuilders that just sink their claws into me again and again? Before I dipped my toes into Slay the Spire, it was a genre I didn’t even know existed, and it’s now become what is easily one of my favorites. A while back, I was given the opportunity to preview the demo for Inscryption from Daniel Mullins Games and Devolver Digital, and I was practically head over heels for it then. So I absolutely had to give the full version a try, especially considering it’s Halloween, and Inscryption is delightfully eerie.

If You’ve Got It, Haunt It 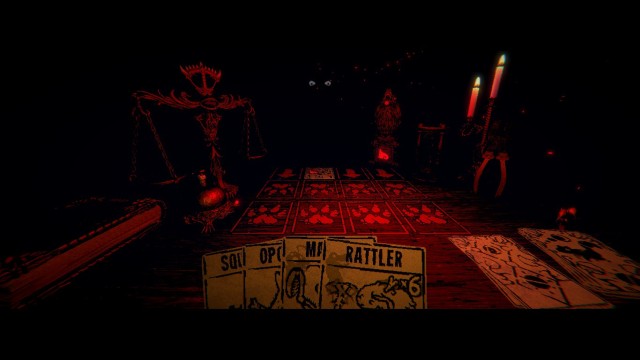 Inscryption opens with the player waking up in a small, distressingly decorated cabin. A pair of luminous eyes peer over the table at you, and you’re informed that you’re invited to play a little card game. And thus, you’re thrust into the world of this dark, ominous blend of roguelike deckbuilder and escape room puzzler. There is a surprising amount of story for the genre, and much of the game is spent piecing it together. In addition to the main story, you’ll be given delightful little story scenarios when playing the deckbuilder portion of the game. While they may seem like they’re just whimsical little additions, pay attention to everything that’s said to pick up on hints and clues.

Gameplay in Inscryption is essentially divided into two portions: roguelike deckbuilding and escape room puzzles. Don’t think of them as separate things, though, as they’re intrinsically linked. Some cards will reveal clues about puzzles scattered about the incredibly creepy cabin, while some of the items you can find in the cabin will help you survive some pretty tough card battles. You’ll likely spend a decent amount of time in the beginning of the game working through the deckbuilder aspects. The rules aren’t necessarily overly complex, but there’s a surprising amount of stuff to learn. 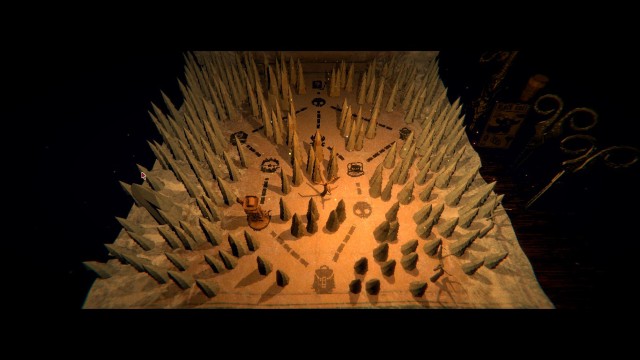 Thankfully, you’ll be introduced to new elements at a reasonable pace. Much like other games in the genre, Inscryption has a game map with branching choices that you’ll travel across, with the obvious goal of reaching the end without dying. There are a lot of different spaces on the map to land on. You’ve got typical spaces that add cards to your deck, and wonderfully strange ones, such as the campfire that is surrounded by some really sketchy (and hungry) characters telling you to warm a card by the fire to increase its health or attack points. Still, others will combine two of the same card to double all of its stats through truly questionable surgery. And that’s just to name a few. Honestly, the more you play, the more you discover, and the more wonderfully complex your strategies become.

Of course, you’ll need to collect and strengthen your cards so that you can survive battles. There are three types of battle spaces: regular, totem, and boss. Regular battles are simple affairs: the creepy entity across the table from you will play normal cards – that is, nothing with overly fancy abilities or anything extremely powerful. That’s not to say these encounters aren’t challenging, because they can be, but totem and boss encounters add layers of complexity and difficulty. In totem battles, your enemy will have the use of a totem that will add a special ability to an entire class of cards. For example, he might have a totem that allows all of his wolf cards to fly, which means they’ll bypass your creatures and attack your life directly. Finally, boss battles are incredibly challenging encounters with set bosses, each with their own unique deck and unique abilities. I don’t want to give too much away about the bosses, as figuring out their tricks is really half the fun. 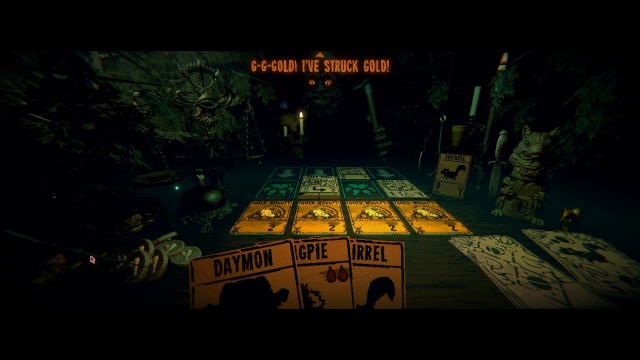 So, how do card battles actually work in this game? You’ll be given a basic starter deck at the start of every new run, though you’ll notice that the cards you receive in it will begin changing as you solve more puzzles in the cabin. Each card has an attack value indicated in the lower left, and a life points value indicated in the lower right. Additionally, some cards will have a cost value shown in the upper right, indicated by a number of bones or blood droplets. Finally, some cards will have a special sigil on them, which grants them an ability, and you can look in the book on the table to read up on them at any time – something I strongly suggest doing, as there are a lot of sigils to learn. At the start of your turn, you’ll have the option to draw from your main deck, or to draw from a deck of squirrels. Yes, squirrels. Squirrels have no attack and only one life point, but they are essential to play.

Most strong creatures will require a sacrifice in order to be played, and frequently, that will mean sacrificing a squirrel. Each squirrel you place on the field can be sacrificed for a single drop of blood (as well as a single bone token), so if you have a wolf, which requires two drops of blood to play, and you have two squirrels on the field, you can sacrifice both of them to call forth the much stronger wolf. Keep in mind you can sacrifice most cards on the field (not all), but you’ll want to be careful about what you give up, as it will be gone for the rest of that encounter. If creatures are opposite one another, at the end of a given turn, that side’s creatures will attack. If damage is sufficient to destroy a card, it will be removed from play, and if no card is directly across from it, it will deal damage directly to that player. Damage, by the way, is indicated by a number of gold teeth piled up on a scale. Tip it far enough towards your opponent, and you’ll win. Do more damage than is necessary, and you’ll be rewarded the excess damage in teeth that can be used for trading later on.

Finally, you can and will die. Sometimes the cards just won’t be in your favor, and you’ll be wiped out embarrassingly fast. Thankfully, you’ll have two lit candles, which represent how many chances you have to stay alive. If you lose one flame, don’t worry too much, you still have another chance. And if you manage to beat a boss, you’ll regain that lost flame. Still, even when the worst happens, death won’t be the end. You’ll be given the chance to create your own “death card,” which will draw attributes from cards in your deck. These death cards can be randomly obtained later when you attempt to make your way across the map. Just be careful, as those cards might come back to haunt you.

Be Scareful on Your Way 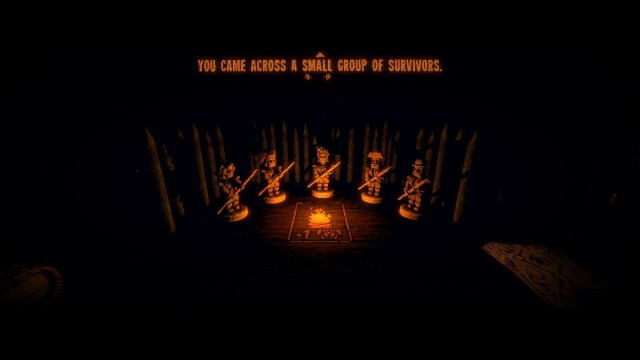 Phew. That’s a lot of information about the card system. And it sounds like it can get pretty complicated, but honestly, it’s extremely intuitive, and Inscryption introduces elements at such a reasonable pace that you should be able to adapt pretty quickly. There’s, unfortunately, a lot less I can say about the escape room puzzles without giving too much away, but suffice to say, I found them unique and challenging. Just to give you an idea, there’s a safe you’ll need to open, a really weird cuckoo clock with a secret, and a wooden squirrel with a knife, to name just a few. You can get up from the table anytime you’re not in the middle of a card battle and poke around. I strongly recommend that you touch everything you can, just to get an idea of what it does. And pay attention to what some of your cards are telling you. It may seem cryptic, but it will make sense in time.

There’s actually so much more about the gameplay I desperately want to share with all of you, but I really think the twists and turns are so much better when they’re a surprise. My final note on gameplay is this: if you think you’re at the end, and you think you’ve mastered the gameplay, you’re probably very, very wrong.

Inscryption’s art style is absolutely perfect for the game, both in the beginning, and later on when things get really crazy. The cabin where you start is small, but the atmosphere is deliciously ominous and undeniably creepy. The map that rolls out every time you sit down at the table has this hand-drawn quality that only helps add to the creep factor. The cards, too, have that same hand-drawn quality that makes them vaguely uncomfortable to use. The music and sound effects all really enhance the atmosphere and add to that low-level, ever-present sense of dread.

Fangs for the Memories

I feel like I’ve gone on and on about this game, and yet I also feel like I’ve only touched upon half of what Inscryption has to offer. There’s just so much done well with this game that it’s hard to find any flaws. Really, the only thing I can even think to maybe, possibly complain about is the difficulty spike in the second half of the game, but that’s such a small complaint. And “difficulty spike” may not even be that accurate; it’s more that there’s a shift in some mechanics that I wasn’t expecting, and it really took me a while to adjust.

Inscryption is refreshingly unique. With all the roguelike deckbuilders popping up these days, they can all start to blend together. Inscryption manages to stand out from the crowd in all the best ways. Complex card strategies blend with escape room puzzles far better than should be possible. And the whole package is wrapped in such wonderfully creepy trappings that it’s perfect for the Halloween season. Just remember: don’t ever assume you’ve reached the end.