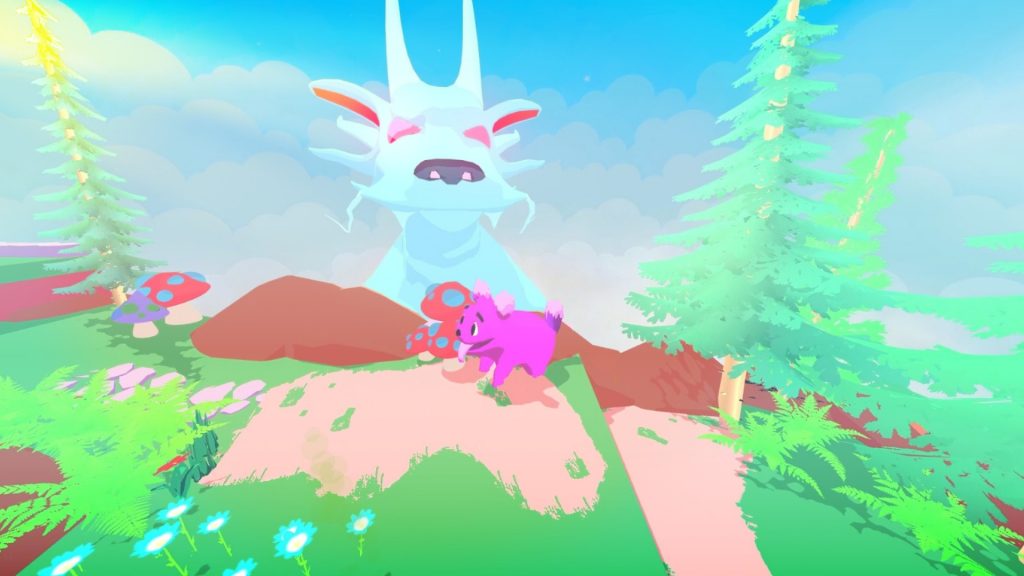 Everything was was lovely and peaceful in the world of the Seekers… until the Jesterians reopened the Pillar of Darkness and threatened to do harm unto the land. Seizing the moment, Viktor immediately enlisted the help of his Seeker, Kippo, an adorable puppy-like creature. With Viktor’s guidance and the Seeker’s action, the pair awakened the mighty Spirit; together, the trio vowed to obtain the key needed to lock away the Jesterians, save their friends, and restore peace to their home.

Such is the premise of Seeker: My Shadow, a 2 – 3 hour peaceful VR puzzler available on Vive, Index, and Oculus. Developed and self-published by Finnish team Jestercraft, Seeker: My Shadow is a saccharine sweet mixture of Captain Toad: Treasure Tracker- like puzzles and Pokémon-like card collecting. Played either alone or with a friend in co-op mode, Seeker: My Shadow promises to “send players of all ages to an immersive adventure” at a comfortable price of $19.99. 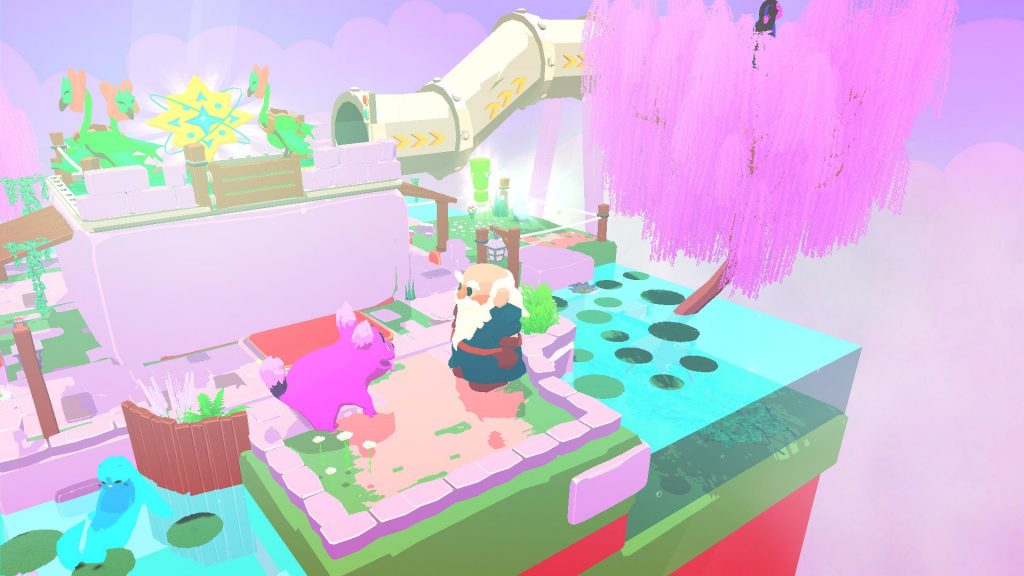 Seeker: My Shadow takes a page out of Captain Toad: Treasure Tracker by asking players to control a cute lil character as it makes its way through puzzle-filled dioramas. Where it differs is players will also need to take control of the Spirit, a gigantic mystical being who can manipulate the dioramas by way of levers and buttons.  Playing two characters at once may seem like a tricky ordeal, but it’s actually a really simple process since each character has limited abilities — Kippo, the cute lil Seeker, walks around, pushes boxes, and collects eggs, while the Spirit rotates the diorama, pulls levers, and collects character cards. Easy peazy!

What might immediately entice players about Seeker: My Shadow are the aesthetics, which are so bright and vibrant. The color palette is a welcoming, youthful array of eye-popping pinks, blues, greens, yellows, and reds, with more subtle earthy tones filling in the rest. Additionally, each diorama is filled with cute little things to explore, like a sea monster floating just beneath the water’s surface or strong gusts of wind carrying other Seekers far, far away. Complete with a lovely soundtrack, Seeker: My Shadow will appeal to the younger crowd or anyone who loves all things cute.

As for gameplay, Seeker: My Shadow offers relatively easy puzzles that will only make you scratch your head once or twice. Each diorama opens up with a small bit of exposition on why they’re there, such as catching a train or ringing a bell to warn the townsfolk. Despite the different small storylines, each goal will be the same — get from point A to sparkly point B. Along the way, there are three eggs for Kippo to collect and one card for the Spirit to nab. If you find yourself stuck on a puzzle, Viktor is hanging around to offer some vaguely worded clues about what to do, like “unclogging pipes” meaning the Spirit needs to literally pull out a wad of grass out of pipes, but other than that, you’re on your own.

I loved Captain Toad’s Treasure Tracker, so I found Seeker: My Shadow to be a fantastic take that I found truly enjoyable, but I did have some issues while playing. First off, there were a lot of dropped framerates while maneuvering the dioramas to the point where I got a little motion sick, and for some reason I could not interact with the menu (perhaps this game is not optimized for the Oculus Rift S?). Additionally, I really wish there had been some sort of UI to indicate how many eggs or cards I had already gotten for each world and how many more I needed, as I didn’t even realize I needed to collect cards until I stumbled upon one like 6 or 7 worlds in. I also wish there was a better hint system — I eventually figured out the one puzzle I was stuck on, but I feel like there could have been one lil NPC to nudge me in the right direction. And speaking of nudges, Kippo can only push blocks, not pull them, so if a block is stuck and there’s no reset button… good luck!

Seeker: My Shadow is not without its issues, and it’s ultimately a fairly short journey, but it’s got adorable little diorama puzzles so full of charm that it’s really hard not to fall in love. If you have a young gamer in the house and want to play family friendly VR titles with them, I’d recommend Seeker: My Shadow right away. If you loved Captain Toad’s Treasure Tracker and want to experience the whimsical world of the Seekers, look no further than Seeker: My Shadow.

Editor’s note: This review is based on a retail copy of Seeker: My Shadow provided by the publisher.