Crash Drive 3 Review: Struggling To Get Out Of First Gear 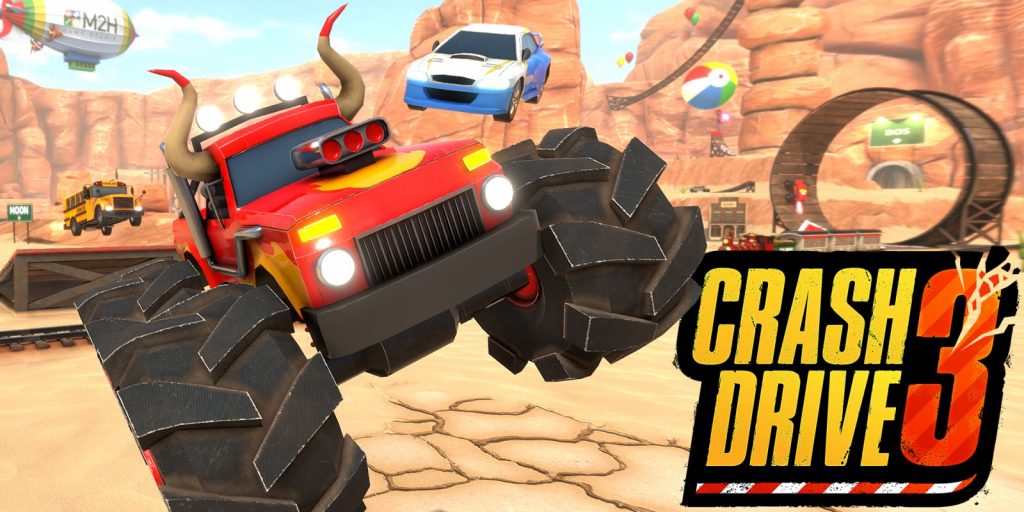 I know, it’s beyond cliché at this stage to say, “this is a perfect fit for the Switch!”. It’s something that I hate saying, but in all honesty, the Switch has turned many experiences that would otherwise pass me by into something that I pick up regularly when I have five minutes spare.

Developer M2H’s Crash Drive 3 falls firmly into this bracket. Despite not being something that I could dedicate endless hours to, its arcade driving, and stunt-based sandboxes are a lot more palatable when digested in short play sessions here and there. 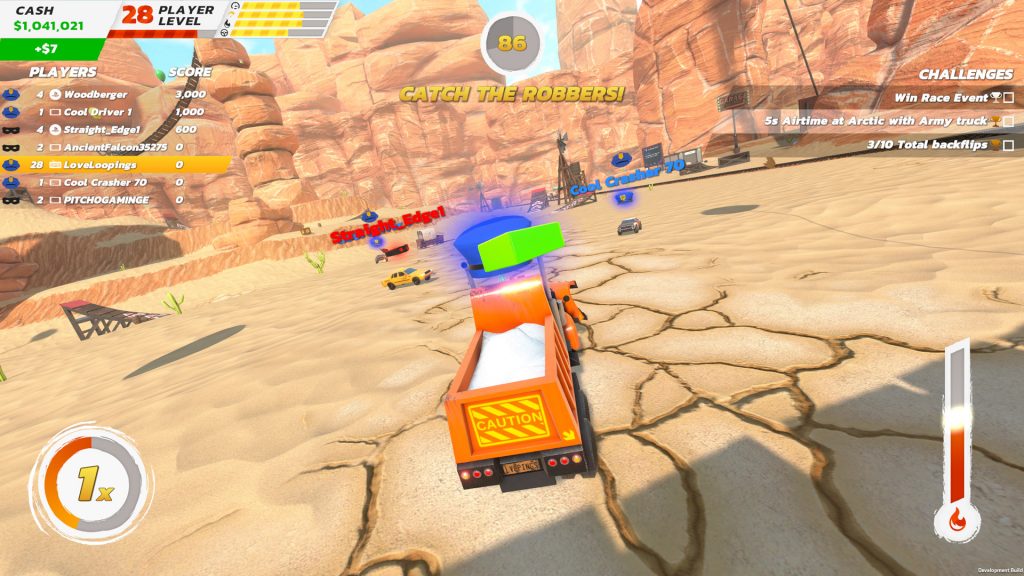 It’s worth saying up-front; If you are someone who likes their games to provide them with purpose and a meaningful overarching objective, the Crash Drive 3 is unlikely to satisfy. It’s entirely possible to see everything it has to offer within a few hours of playing and really relies upon the player to find their own fun once you’ve unlocked all of its five maps.

The concept is simple. You’ll initially be dropped into a large, winter-themed map, which is absolutely stuffed full of crazy ramps, obstacles, and jagged terrain, which are all perfect for launching yourself off. Also dotted around the map are ten large green rings, usually found in mid-air or at the end of a ramp, requiring you to pull off a stunt of some sort to collect. Collect eight of the green rings, and you’ll be signposted towards the map’s exit, which leads to the next map.

Using the exit also requires you to pay a fee, and this is where Crash Drive 3’s main gameplay hook comes in. As you’re driving around a map, either amusing yourself or collecting green rings, you’ll be periodically warned of an event that’s about to take place. If you’re playing online, anyone else in your session will also get the same warning, and once a timer has hit zero, the event will start, and the lobby suddenly finds themselves taking part in some sort of competitive mini-game.

At first, it seems there is a decent amount of variety to these events. The first one I experienced had the lobby all chasing a huge beach ball around the map, ramming into it trying to cause the most damage. Other favorites of mine included cops and robbers, and king of the hill. Besides these more novel modes, there are also straight-up races, and contests to see who can rack up the most points from pulling off stunts within a set time.

Players are awarded cash for competing in these events, with higher places awarding more money, naturally. This cash can then be used towards either unlocking new cars and customizations or paying that fee I mentioned earlier to unlock the next map. 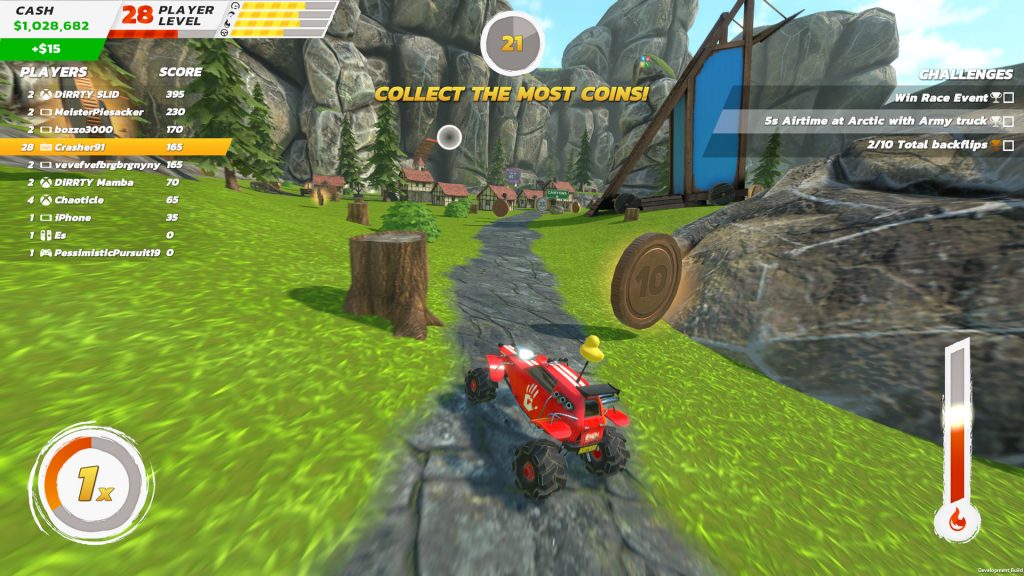 As above, the events (of which there are ten) initially seem decently varied. However, once you hit the second map of the five, you quickly realize that the gameplay loop outlined above is the entire game. Collect rings, earn cash to unlock the next map via playing mini-games, rinse repeat all over again in a different environment. It’ll take no more than a few hours to unlock all five maps, and once you have done that, whether you keep playing will depend on your appetite for grinding out the cash and player levels needed to purchase the remainder of the 50 or so vehicles on offer.

Like the mini-games on offer, the five maps included at launch also seem at first to offer a welcome change of pace. Beyond the initial winter wonderland you start in, you’ll progress through the medieval, wild west, and tropical-themed areas, before finally unlocking the last map on the moon.

The fun of seeing what a new map has to offer is initially there. There are a few easter eggs and secret areas to hunt down in each area, which are fun to chase. However, what you’ll quickly realize is that these environments are more palette swaps and aesthetic changes than anything else. By the time I had made a giant leap for mankind and taken to the moon, my enthusiasm for these play spaces was almost completely sapped, given how little is done to change the fundamentals in how each area plays.

Not All Doom And Gloom 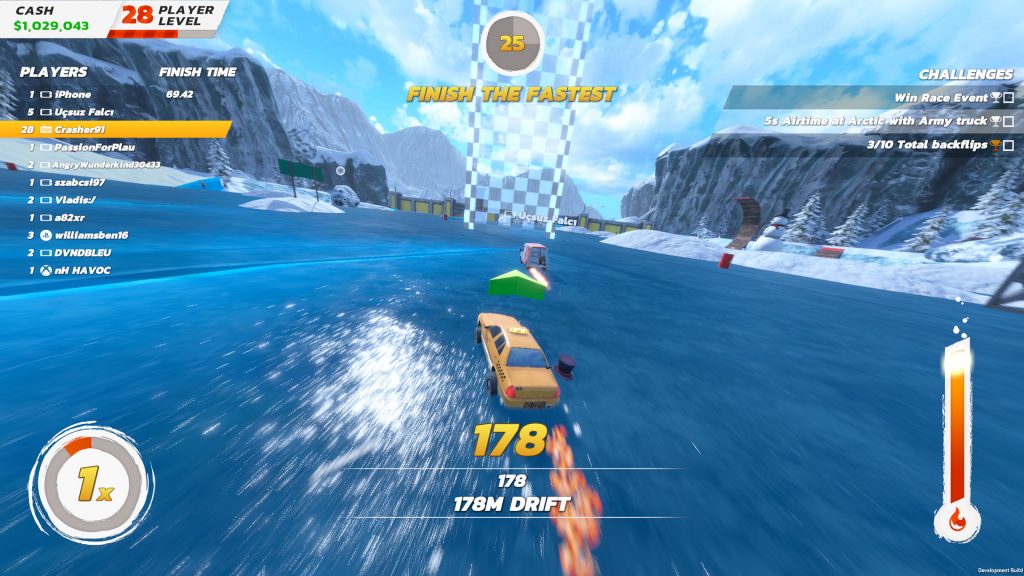 It probably sounds like I really don’t think Crash Drive 3 has anything of value to offer, but that isn’t strictly true. I think the reason the gameplay loop grated on me so much had a lot to do with the circumstances under which I played it.

Naturally, playing it for review, I wanted to see everything it had to offer in a timely fashion and therefore found myself playing through it in several sessions, each over an hour in length. If you pick Crash Drive 3 up and instead view it as something to play in short bursts, you’re likely to find its repetition a lot more palatable.

Despite having put in the time I needed to for this review, I’ve found myself picking up my Switch here and there for a quick five-minute burst, either playing through a few mini-games or testing out the new vehicle I was able to afford following my previous session.

Enjoyed like this, Crash Drive 3 and its structure begins to make a bit more sense, and it’s why I brought up the “perfect for the Switch” point at the top of the review. If you want something to play between bigger games, or while you make your daily commute to work, for example, then you may find some value here.

It’s also something that I would imagine will come together even more when enjoyed with friends. Crash Drive 3 supports up to 12 players per lobby. It’s worth noting that my time was spent with random players I was placed with via the in-game matchmaking, which I think also contributed to my boredom. Much like the battle modes found in Mario Kart, I suspect Crash Drive 3’s light-hearted modes will hold more appeal when going up against familiar faces. Who doesn’t enjoy party games, even more, when they have a friend nearby to swear at?

Needs Some Time In The Garage 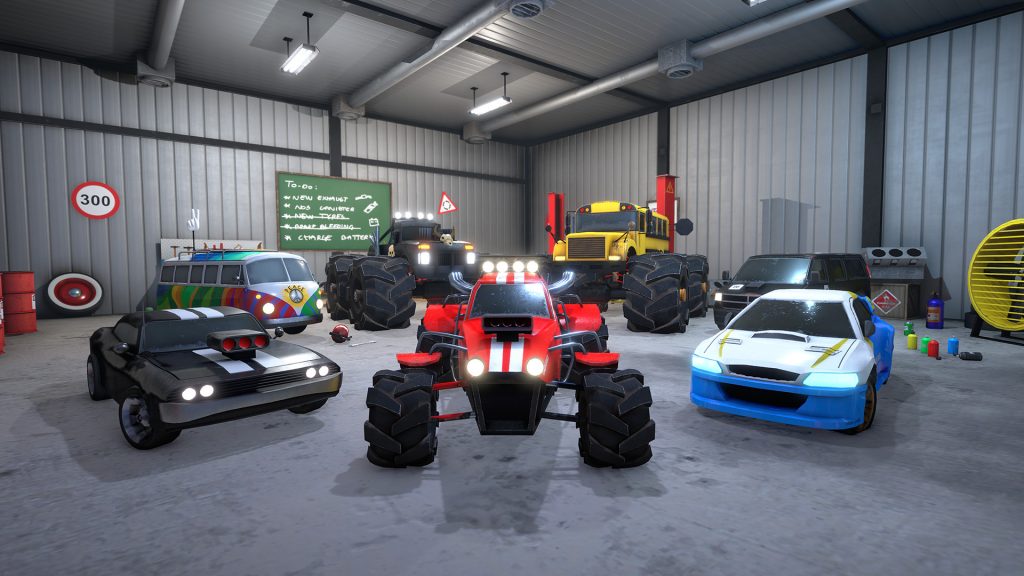 Crash Drive 3 could, unfortunately, use some additional polish, at least on the Switch where this review was carried out. Playing mainly in handheld, I found this Switch port to be sub-par in terms of performance. Frequent stuttering and frame-drops were all present, and to be honest, extremely disappointing when taking into consideration the extremely simplistic art style and graphics.

Further to the technical issues, I also found the camera to be an absolute nightmare. The controls are nice and accessible for the most part, however making anything close to a sharp turn often sends the camera haywire, which led me to lose my bearings regularly. This would be problematic in any driving or racing game, but in Crash Drive 3, given its reliance on stunts and precision-based driving, a wayward camera is a major flaw.

Crash Drive 3 and its extremely simplistic and repetitive gameplay loops are difficult to recommend for anyone looking for a substantial arcade driving experience. If, however, you’re after a fun little time-waster that you just want to have to hand for a few moments of downtime here and there, then you may find Crash Drive 3 an adequate distraction; provided you can look past the technical issues, that is.